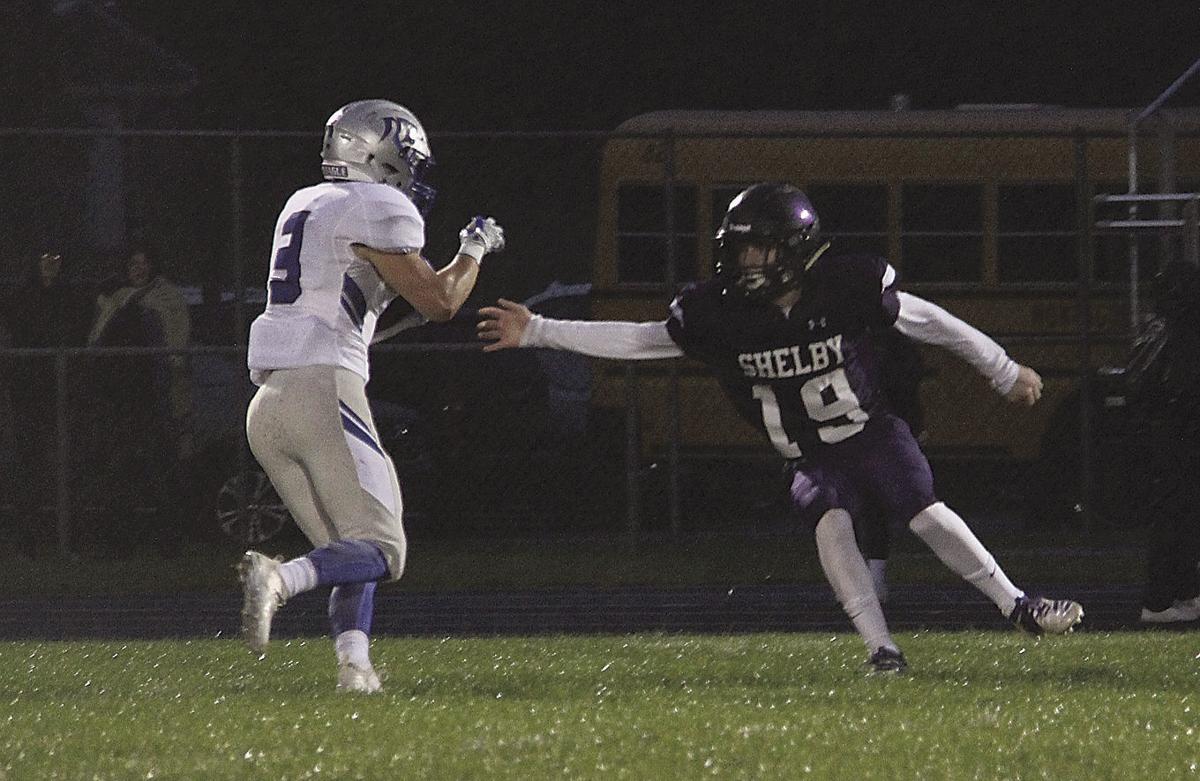 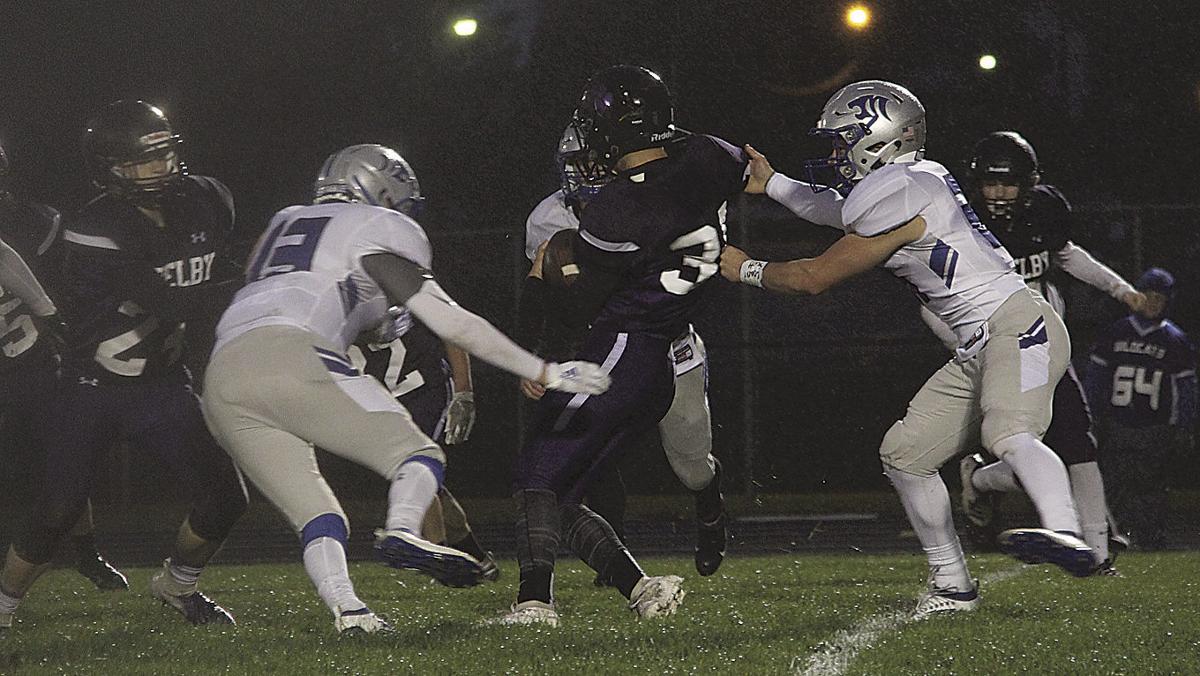 Shelby’s Blake Greene (center) is yanked down by a Montague defender during Friday’s WMC football game at Shelby. The Tigers lost, 75-0. 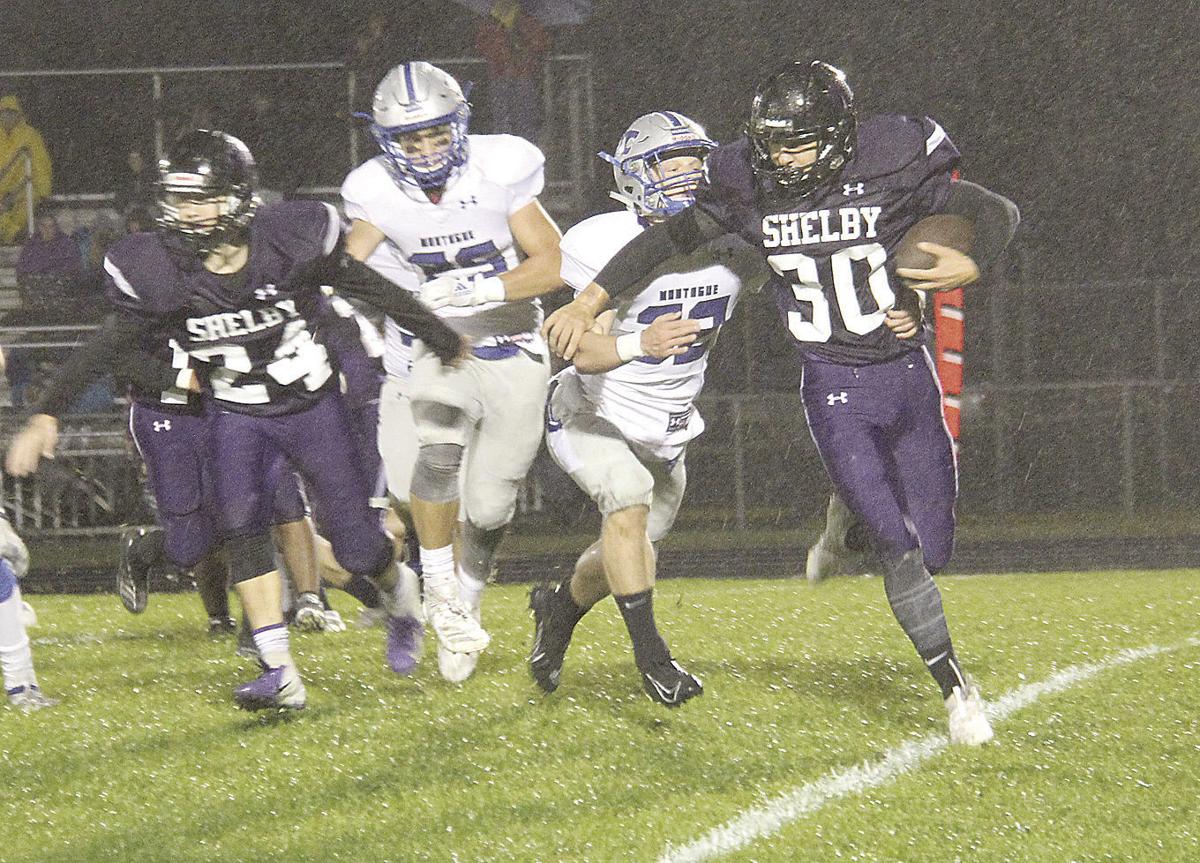 Shelby’s Blake Greene (right) tries to get to the edge during Friday’s WMC game against Montague. Xavier Wallace attempts to block for Greene. Shelby lost, 75-0. 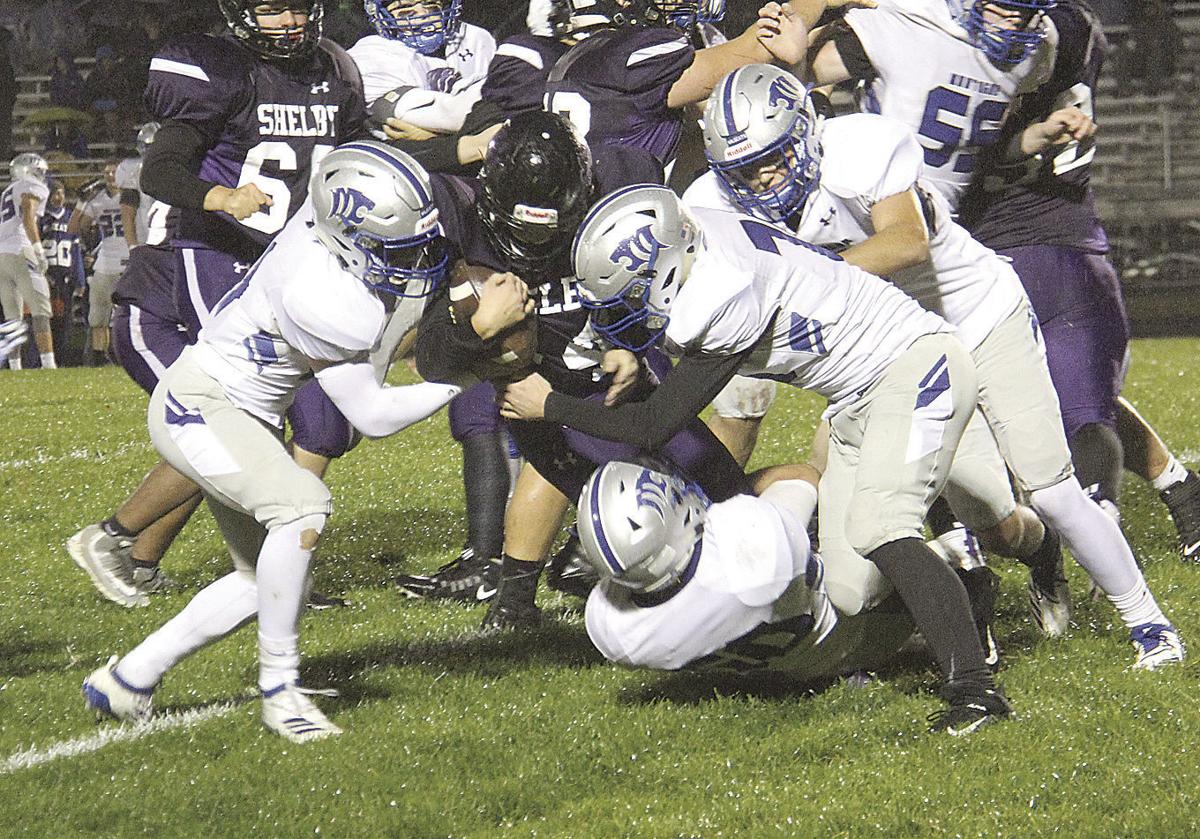 Shelby’s Blake Greene (center) is yanked down by a Montague defender during Friday’s WMC football game at Shelby. The Tigers lost, 75-0.

Shelby’s Blake Greene (right) tries to get to the edge during Friday’s WMC game against Montague. Xavier Wallace attempts to block for Greene. Shelby lost, 75-0.

Week eight has arrived, and with it the hardest-hitting and most emotional game of the year in Oceana County — the Hart/Shelby game.

The two teams need a win. Neither team has won since the Pirates’ overtime thriller against Holton in week one. With the Blood, Sweat and Tears Jug on the line, the teams will be as hungry as anyone in the state to win.

The rivalry is here. For the first time in 13 years, the Hart/Shelby matchup will close out West Michigan Conference play.

Both teams are coming in off lopsided defeats to elite WMC teams. Shelby took a 75-0 beating at the hands of Montague Friday night. It’s the fourth time in four seasons the Tigers have allowed a 70-point game to an opponent, and the second time this year after Oakridge dropped 77 on them in September.

The Tigers (0-7, 0-6 WMC) were without Laz Madrigal, unavailable by MHSAA rule after being ejected from the previous week’s game, and that stifled the Shelby offense. Xavier Wallace was the top performer on that side of the ball, with 19 total yards — 16 rushing, three receiving. On defense, Jakob Whitlow had eight tackles and Ian Purvis had seven, but they couldn’t stop a Wildcats team that boasts great talent.

“Just a great team,” Shelby coach Lorenzo Rodriguez said of the three-time defending WMC champs. “Physical size mismatches across the board as far as our athletes versus their athletes, and a well-run offense. Drew Collins runs the show at the quarterback position pretty well and their front is just good. They’re good at what they do. They outdid us all the way across the board.”

Montague scored 55 points in the first half and played reserves whenever it could in the second, although their roster isn’t much larger in number than the Tigers’.

“Their numbers aren’t the greatest either, so you’re facing them on both sides of the ball, so it was a challenge both ways,” Rodriguez said.

The coach said he continues to be proud of his team for its effort, despite the results not going its way.

“A great, positive, enthusiastic group that’s playing the best they can from quarter one to quarter four,” Rodriguez said of his team. “I’m proud of my kids. People may say different, but our kids keep battling and just come to practice and work hard. You have to respect that.”

Hart took possession of the Blood, Sweat and Tears Jug that signifies the Hart/Shelby rivalry back in 2016 and has won three straight meetings. Rodriguez said his team is itching to bring the jug back south.

The coach said that Hart is multiple on offense, which helps the Pirates. Thomas Tanner and Braeden Carskadon, he said, make that offense go. When it comes down to it, though, this game is likely to be decided by desire more than formations.

“We’ve been talking about it for a while,” Rodriguez said of the matchup. “That was one of our goals at the beginning of the season. We’re in week eight and we’re ready to take that thing back.”

Hart also had a rough Friday night, against WMC co-leader Ravenna, losing by a 47-2 score.

The Pirates’ only points came early in the game, when a snap went over Ravenna quarterback Conner Kilbourne and into his own end zone. The Bulldogs were able to recover to avert a Hart touchdown.

Hart’s offense was shut down in the game, gaining only 13 total yards. Leo McCulley had 12 tackles to lead the Pirates, and Leo Guadarrama had an interception.

“We had some turnovers and we didn’t execute well and they’re a good football team,” Hart coach Rick Witteveen said of the Bulldogs. “They play technique sound football. We didn’t maintain blocks....You can’t afford turnovers against anybody, no matter who it is.”

With last week’s game in the books, Witteveen finally allowed the Pirates to begin looking at Shelby. He said he wouldn’t even address the topic with the team prior to the end of last week’s game.

Now that the game is here, though, the Pirates will be going hard for their fourth straight win in the rivalry.

The Hart coach said slowing down Madrigal will be key for earning a win, as well as tackling, which has been an issue for the team all season.

“We just have to have gap control up front and swarm to the football,” Witteveen said. “We haven’t tackled well all year and we have to tackle better, or else (Madrigal)’s going to have a big night.

“They play hard. That’s one thing on film. Even though they haven’t won, they play hard until the last second ticks off.”

The Hesperia Panthers face a very tough task this week, as they play host to Orchard View, a top-5 ranked team in Division 4. The Cardinals have had a storybook season and will enter the game undefeated.

Hesperia, meanwhile, is struggling, having taken a 38-0 loss to Central State Activities Association Silver champion Morley-Stanwood last Friday. The Panthers fought hard and trailed only 14-0 to the Mohawks at halftime, but ran out of gas in the second half.

“In the second half the Mohawks’ depth took over, and they wore us down,” Hesperia coach Doug Bolles said.

Hesperia (2-5, 2-3 CSAA Silver) managed only 104 offensive yards, getting many of them on an eight-minute drive in the second quarter. Down only 6-0 at the time, the Panthers methodically worked down the field and got inside the Morley 10-yard line before being stopped at the 6-yard line on fourth down.

This week, the Panthers dip into their past for a boost. The school will celebrate the 50th anniversary of the undefeated 1969 team at halftime. That Hesperia team went 8-0 in the days before a formal playoff was held, and they outscored their opponents by an average of 32-7, being tested only by their final two opponents, Newaygo and White Cloud, which Hesperia beat by a combined 14 points. (The Panthers also went undefeated two more times in that era, in 1970 and 1973.)

Before the game, the current Panthers will have the chance to meet with the 1969 legends, which Bolles said would be a “pretty special” opportunity for his team. On the field, though, things won’t be easy against a Cardinals team that went 2-7 last year and is on a magical ride this fall.

“They’re having a great season,” Bolles said. “We won’t wave the white flag, we’re here to compete, and my guys will give what they have.”