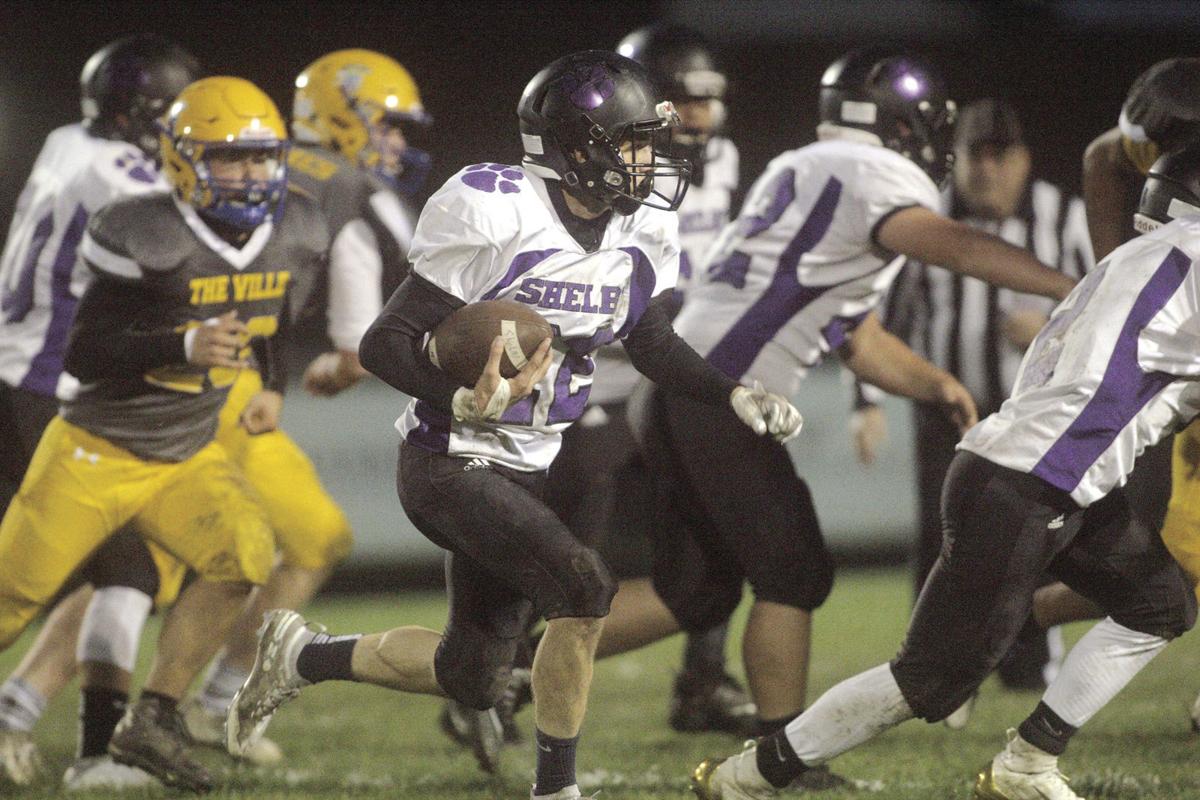 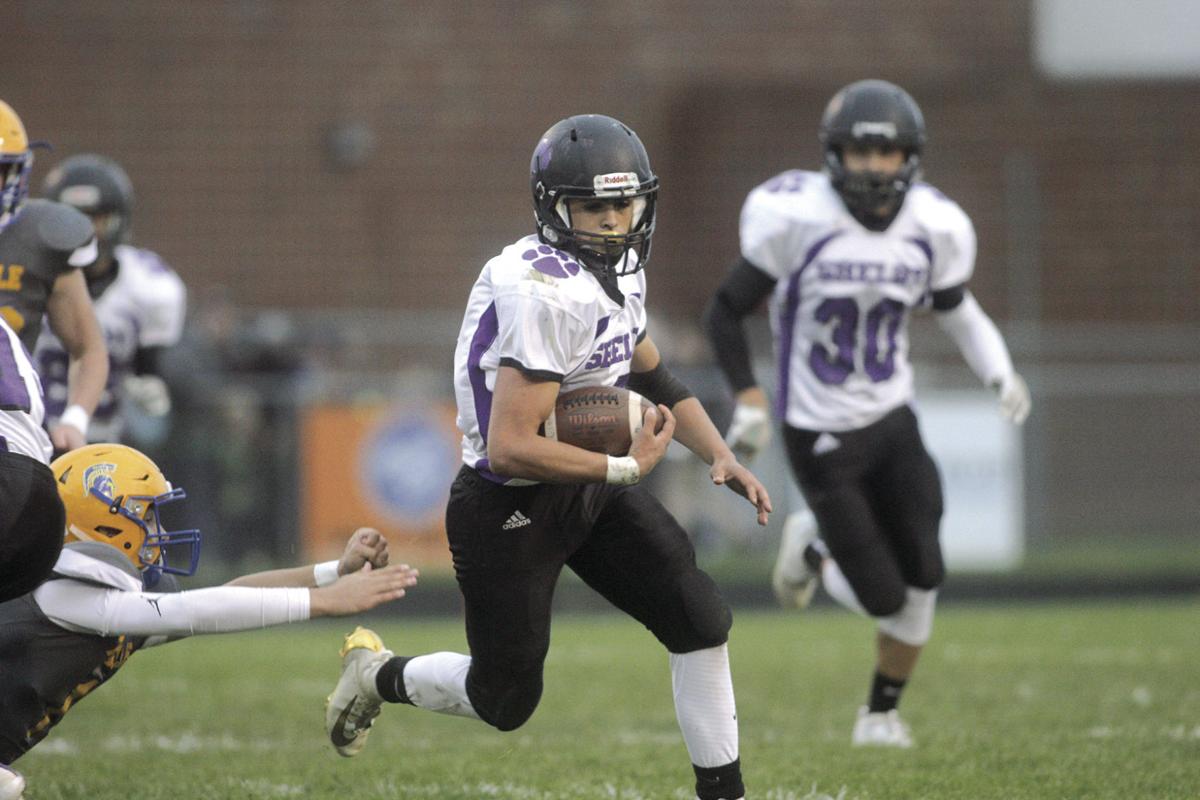 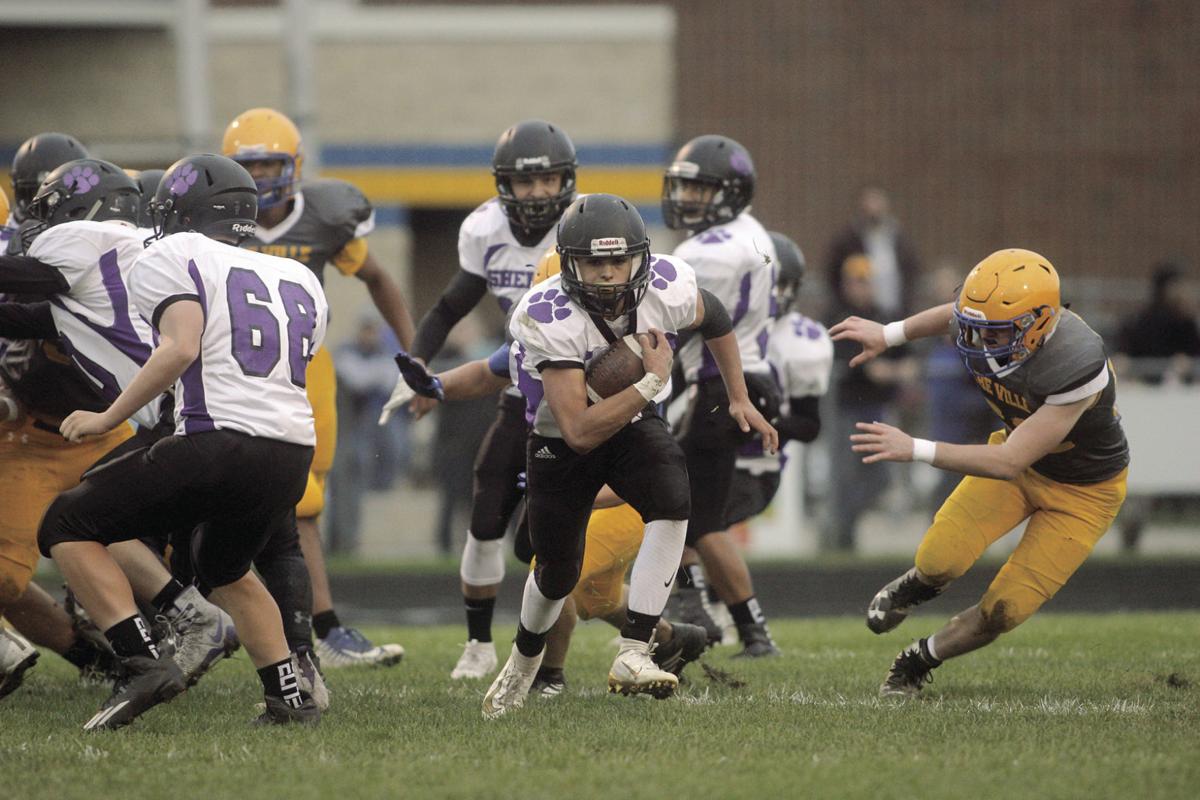 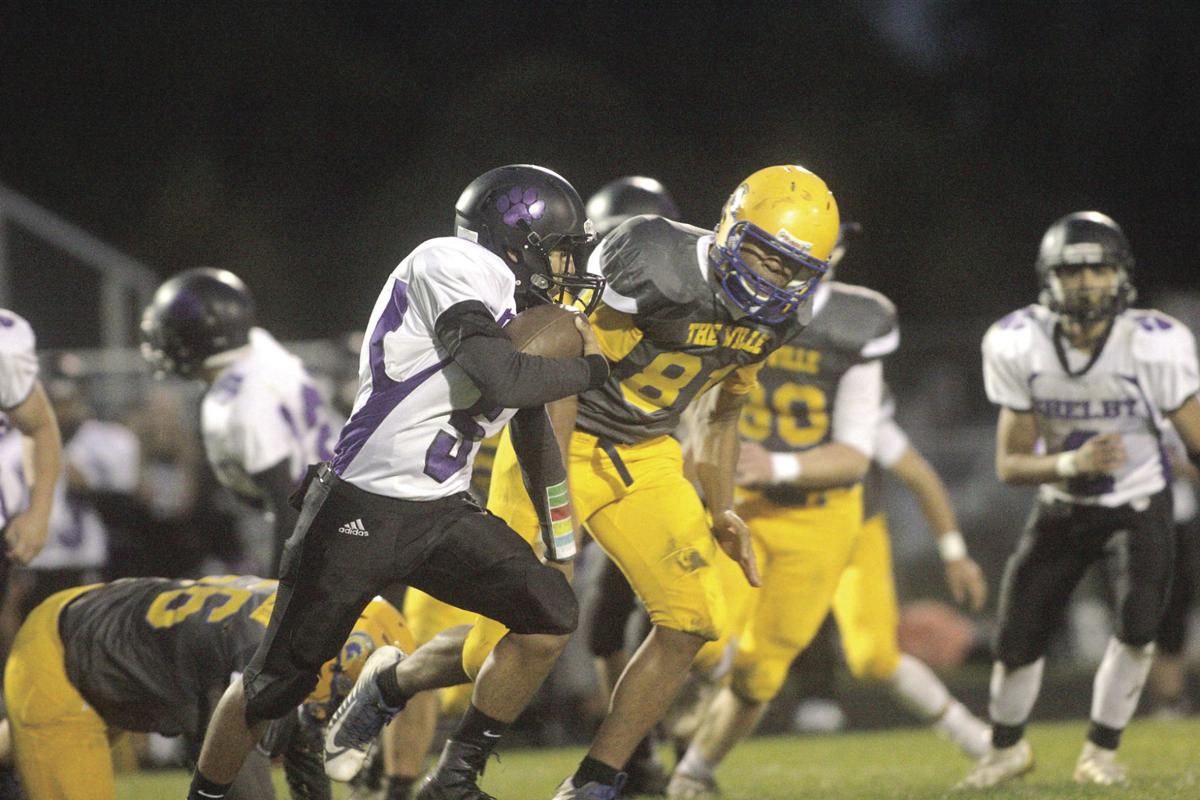 Shelby’s Lorenzo Rodriguez looks to head up the field in the second quarter while being pursued by Mason County Central’s Malakye Strejcek last Friday at Spartan Community Field in Scottville.

Shelby’s Lorenzo Rodriguez looks to head up the field in the second quarter while being pursued by Mason County Central’s Malakye Strejcek last Friday at Spartan Community Field in Scottville.

Another week passed without Oceana football teams being able to come up with a win last Friday, and with some imposing matchups coming, week seven isn’t looking promising either. However, the pageantry of homecoming is on its way to Shelby and Hesperia, so perhaps those teams can bring a little extra to the table that evening.

Shelby looked to be on its way to a potential victory early Friday behind its best ground game effort of the season. Running back Laz Madrigal dominated the opening half, running for 174 yards and two touchdowns, and the Tigers held a 14-13 lead at halftime.

However, Madrigal was ejected after MCC went on a go-ahead touchdown drive to start the third quarter, and the Spartans went ahead 33-14 before the Tigers rallied for one more touchdown drive, scoring on a 48-yard pass from Lorenzo Rodriguez to Jason Hubbard.

Shelby (0-6, 0-5 West Michigan Conference) did get one more chance after that, but fumbled the ball away to clinch the win for MCC.

“It took away that top runner,” Shelby coach Lorenzo Rodriguez said of Madrigal’s departure from the game. “Our fullback is a key runner in our offense, and once he wasn’t available to play, that slowed our run game tremendously.”

It was, however, Rodriguez’s best passing game of the season to date, as he completed 5-of-7 passes for 82 yards and that score.

Pentwater student Khole Hofmann countered with his usual big-time performance, running for 165 yards and two touchdowns to carry the Spartan offense. Teammate Raiden Keefer also came up with over 100 yards of total offense.

Blake Greene led the Tiger defense with 12 tackles. Payton Mero had 11 takedowns, and Jakob Whitlow and Ian Purvis each added 10.

The Tigers have the excitement of homecoming to boost them as they prepare to welcome Montague to town this Friday. The Wildcats will be coming in angry; they’ve lost two games in a row after dropping a tough one to Ravenna on Friday, the first time in five years Montague has lost twice in a row.

“We have to come out and execute just like (against) any team,” Rodriguez said. “We’ve continuously gotten better and gotten more physical. Our offense is building and getting more consistent.

“They’re going to bring a 3-3 stack defense and bring some pressure, and I feel that’s an advantage for us, because we run that defense on a daily basis.”

Rodriguez said the buildup of the week should give his team a boost.

“It’s a little extra motivation for us,” Rodriguez said. “The spirit week gets them going and ready to go. Bottom line is, we have to show up Friday night and play some good football. Montague’s coming off two losses and wants to get back on the winning track, and we want to get our first win.”

Coach Rick Witteveen said this week that facing Oakridge is “like running into a buzz saw,” and his Pirates felt that pain Friday after dropping a 70-8 decision to the WMC-leading Eagles.

Hart (1-5, 0-5 WMC) scored its only touchdown in the fourth quarter, the final score of the night, on a 22-yard scoring pass from Braeden Carskadon to Adrian Rendon. The Eagles had 35 points in the first quarter en route to the blowout.

Witteveen said he was pleased that his team continued to put effort out the whole game, but also emphasized that the Pirates need to improve in how they do the little things if they want to improve their results.

“You’re not going to do the big things until you do the small things well,” Witteveen said. “That’s what we keep pushing. Some are and some aren’t. We have to hope more of them start utilizing the basic fundamentals and techniques.

The Pirates are facing another very tough opponent this week in Ravenna, which has won five straight games, including an impressive victory at Montague last week. The Bulldogs throw the ball far more than most teams in the league. Conner Kilbourne had 164 yards passing for the Bulldogs in last week’s victory. However, Witteveen said that doesn’t mean Ravenna can’t also run the football.

“They do throw quite a bit, but they have a good running game,” Witteveen said. “Their running back is solid. Their quarterback is a dual threat, run and pass. You can’t focus on one aspect.

“They’ve put in a Wildcat formation with that Grant Parker that’s 6-4 or 6-5 and 200-whatever, and he’s a force to run the ball and he can also throw it. You can’t just load the box when they go to the Wildcat. They have a lot of weapons.”

Witteveen emphasized playing tougher with the best teams in the WMC before the season began. It hasn’t worked out the way he had hoped, but his team has to keep pushing, he said.

“Amp it up even more,” Witteveen said. “You have to play at your highest level against these teams.”

Hesperia did not play a good game Friday night, coach Doug Bolles said, and the Panthers paid for it against a good Kent City team, losing 42-0 to drop to 2-4 (2-2 Central State Activities Association Silver).

“Kent City was in control throughout the contest,” Bolles said. “We played flat and uninspired football against a good opponent and you can not do that against a Bill Crane-coached team. They’re too well prepared.”

Quarterback Logan Balkema, a key part of the Panther offense, did play despite a sore ankle from last week. Bolles said Balkema was at about 80 percent, but said given the circumstances he played well.

The Panthers have another tough battle this week against CSAA Silver leader Morley-Stanwood. The Mohawks are unbeaten in the league and can clinch the outright title with a win Friday. Hesperia’s job is to play spoiler.

“I expect a better effort than what we put forth last week and now we’re finally home after four consecutive games on the road, it should be fun,” Bolles said. “We stand in the way of the Mohawks taking the league title outright. We’d love to spoil that for them and prove we’re a solid ball club.”

The effort level must go up, Bolles said, for Hesperia to be successful.

“Just (need to) get back to the basics, not try and do what we’re not capable of doing,” Bolles said. “I love my guys to death, but until they want it as much as the coaches do, things won’t change.”