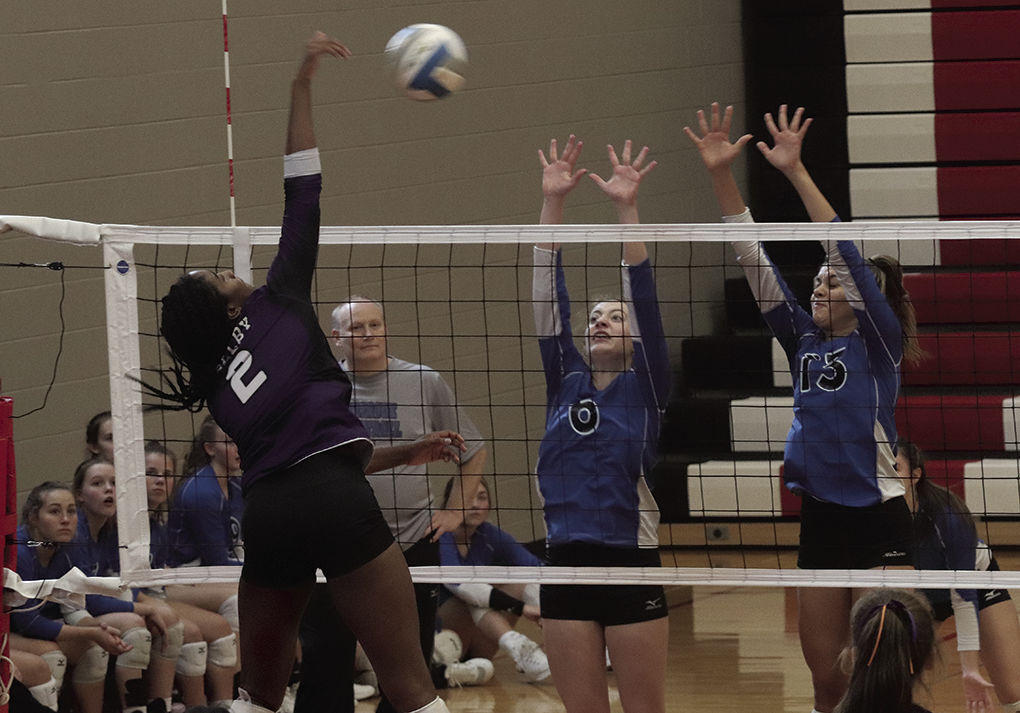 Montague’s Morgan Herremans (6) and Ana Trevino try to block an attack by Shelby’s Navea Gauthier during the October WMC tournament in Whitehall. Gauthier earned first team all-state for the Tigers. 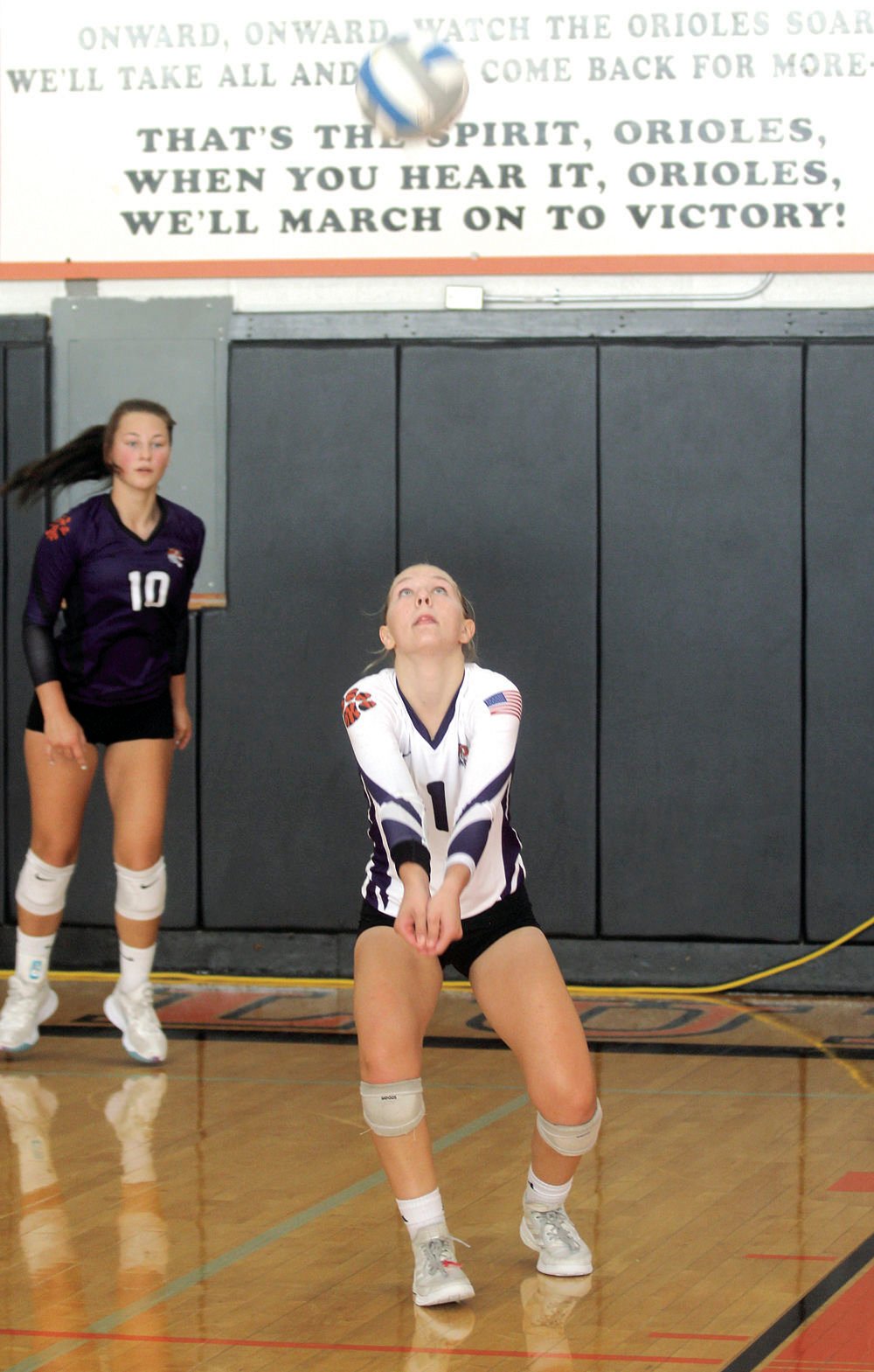 Shelby’s Morgan Weirich lines up a bump pass during the Ludington Invitational in August. Weirich was named third team all-state for the Tigers.

Montague’s Morgan Herremans (6) and Ana Trevino try to block an attack by Shelby’s Navea Gauthier during the October WMC tournament in Whitehall. Gauthier earned first team all-state for the Tigers.

Shelby’s Morgan Weirich lines up a bump pass during the Ludington Invitational in August. Weirich was named third team all-state for the Tigers.

It was a big year for hardware for Oceana County volleyball this season, especially in Shelby. The district champion Tigers had three players earn all-West Michigan Conference first team honors, a fourth get honorable mention, and maybe most notably of all, earned a team academic all-state honor.

On the court, the headlines came from freshman Navea Gauthier all season, capped off with the announcement Monday that she’d earned first team all-state. Gauthier took the area by storm this season with her high-flying attacks but was a force all over the court, often ranking among the team leaders in digs and aces in a given match as well.

“I knew I had big shoes to fill of the seniors who left last year,” Gauthier said of her freshman season in October. “I’ve played a bunch of volleyball in my life, so I just figured I’d come in and do it, do my best and see how it goes.”

It’s safe to say it went well. Her return next year as a sophomore will put the Tigers in position for another special season in 2022.

The Tigers had a second all-state award recipient, as junior Morgan Weirich earned third team honors. The libero and daughter of the head coach put up impressive defensive numbers throughout the season, racking up 536 digs and 30 aces despite missing a couple of weeks late in the season with an injury. She served nearly 90 percent of her attempts into play.

“As a coach, we need her on the floor,” coach Weirich said of Morgan after the team’s district semifinal win over Hart. “As a dad, I love seeing her play and I have a pretty good seat to watch her play.”

Joining those two Tigers on the all-WMC first team was senior Kendall Zoulek, capping an impressive career that saw her get the first team conference recognition all four seasons.

Zoulek’s offensive statistics took a dip this year as she became a complementary player with Gauthier’s arrival, but her all-around skill remained, and she was second on the team in digs, with 519, as well as in kills, with 293. She also posted 70 aces, serving into play at a 91 percent clip. Zoulek’s willingness, even happiness, to take a back seat to Gauthier after leading the team’s offense for three years was a key factor in Shelby’s success.

“I was kind of happy (to do it) because I had other people I could rely on, and not just rely on myself,” Zoulek said after the Tigers won their district title over Hesperia.

Daphne Clark earned honorable mention in the WMC as the Tigers’ setter. She was a steady performer all year long and played her best volleyball late in the season. Clark racked up 1,181 assists in 2021 and also had 67 aces from the service line.

Hart’s Finley Kistler joined the Shelby players with all-WMC awards. Kistler was named to the first team after a strong year as the Pirates’ setter. She was also one of the Pirates’ best servers, highlighted by a 12-ace day at the team’s season-opening MSA Fieldhouse Invitational.

Hesperia had one player, Lacey McCallum, named to the all-Central State Activities Association Silver first team and another, Elli McAree, earn honorable mention. McCallum, a junior, was the Panthers’ setter and often one of their better offensive threats as well. Despite having her season disrupted by a COVID-19 quarantine, McCallum totaled 382 assists in 2021 as well as 82 kills and 77 aces.

McAree was one of the Panthers’ leading attackers, playing the right side hitter position. She totaled 131 kills on the year, as well as 133 digs, and served 94 percent of her attempts into play. McAree added 20 blocks.

In addition, Kayla Rumsey earned all-area after posting 56 kills and 45 digs in only 50 games played.

Coach Monica Grimard called the season a trying one after dealing with virus-related absences and a death in the family, but was proud of the Panthers for the season they put together.

“It was a most challenging season for me, but these three young ladies did a very nice job for the program and I am excited to see what both McCallum and Rumsey do in the coming years on the team,” Grimard said.

“I am very proud of each and every one of these young ladies,” Pentwater coach Kelly Pascavis said.