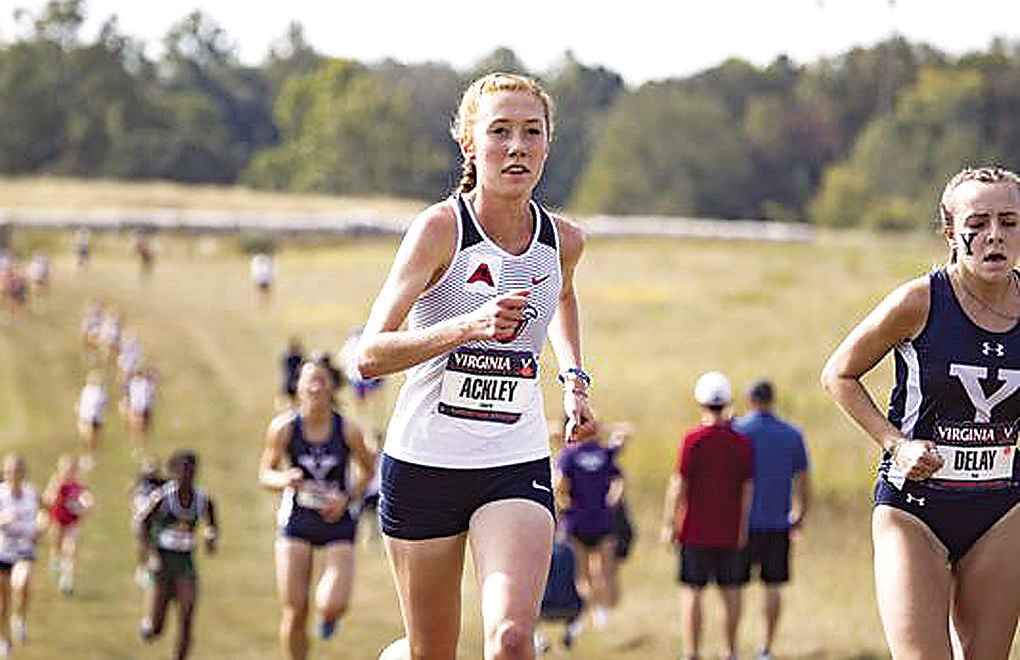 Liberty’s Adelyn Ackley competes at the Panorama Farms Invitational in Earlysville, Va., during the 2019 season. Ackley, who was a freshman for the Flames that year, starred in her debut season and is anxious for her second act. 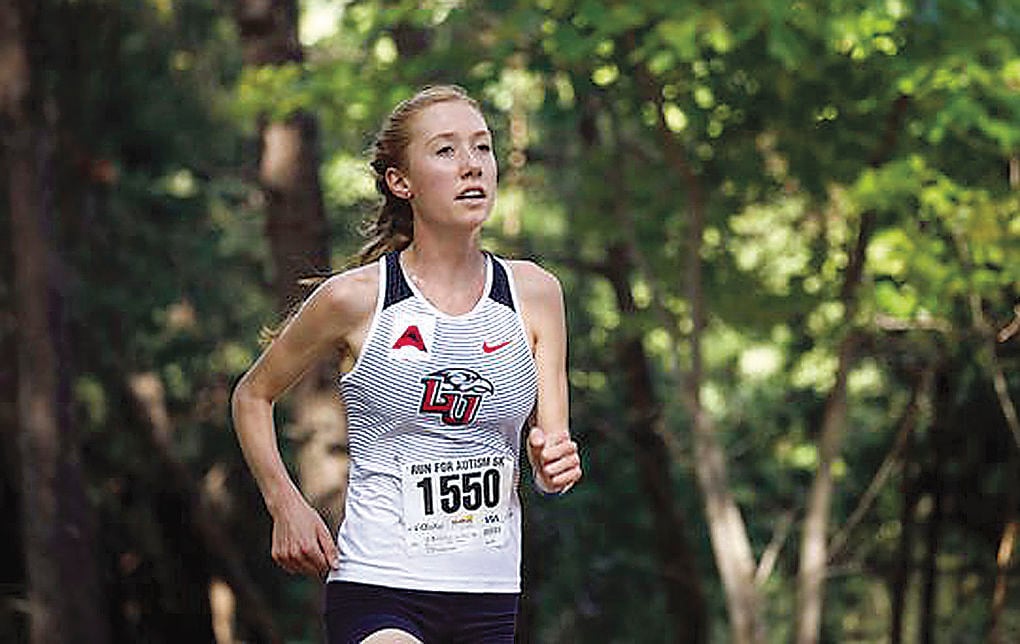 Liberty freshman Adelyn Ackley races in her debut race as a Flames’ cross-country runner at the 2019 Liberty Challenge. Ackley won her first race and was her team’s top finisher in each race she completed as a freshman. 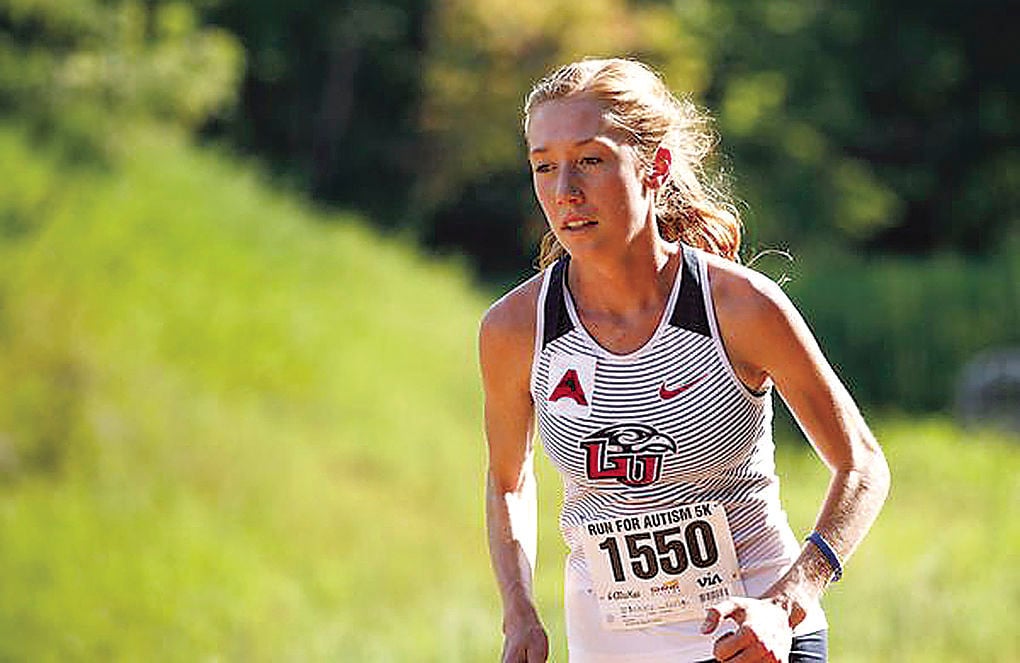 Liberty freshman and Hart alum Adelyn Ackley races in the lead in her first collegiate meet in August 2019. Ackley won the Atlantic Sun Conference individual title in her first season, setting a school record at the 5K distance.

Liberty’s Adelyn Ackley competes at the Panorama Farms Invitational in Earlysville, Va., during the 2019 season. Ackley, who was a freshman for the Flames that year, starred in her debut season and is anxious for her second act.

Liberty freshman Adelyn Ackley races in her debut race as a Flames’ cross-country runner at the 2019 Liberty Challenge. Ackley won her first race and was her team’s top finisher in each race she completed as a freshman.

Liberty freshman and Hart alum Adelyn Ackley races in the lead in her first collegiate meet in August 2019. Ackley won the Atlantic Sun Conference individual title in her first season, setting a school record at the 5K distance.

It’s been a long time since Hart alum Adelyn Ackley raced competitively, and she is itching to get back on the cross-country course for Liberty as soon as possible.

The three-time individual state champion and two-time team state champ went to the Division I school in Lynchburg, Va., for her freshman season in 2019 and took the Atlantic Sun Conference by storm, winning the individual league title and leading the Flames to a second-place team finish. On top of that, Ackley set a 5K school record in the Atlantic Sun Conference meet in Fort Myers, Fla., posting a time of 17:08.7.

That race was held Nov. 2, 2019, and to date it was the last varsity cross-country race Ackley completed. Two weeks later, Ackley had to drop out of the NCAA Southeast Regional race in Virginia due to a stress fracture she had been battling for weeks after several doctors diagnosed it as tendinitis. (This makes her school record all the more impressive.)

Of course, like almost every other college athlete’s 2020, Ackley’s was upended by the COVID-19 pandemic as the Atlantic Sun postponed all fall sports to the spring. It remains up in the air as to whether that will happen, either, but Ackley is back at full health and anxious to get back on the course.

Ackley said she is hopeful of competing for the Flames in outdoor track as well at some point. She said she’d like to try the steeplechase.

“The toughest part, I’d say, is just not knowing when it’s going to be,” Ackley said on Dec. 17 at her sister Savannah’s collegiate signing ceremony. “It’s been hard not to think about it too much or complain, but I know I have to have a good attitude. I just have to keep motivated through this off-season and just trust God that it’s going to open back up when it’s His plan and His time. I’m just sticking with that and staying faithful to the training.”

Ackley said she saw “four or five” doctors while dealing with what turned out to be a very rare stress fracture on the outside of her heel. Going into the Southeast Regional race, which was run at the 6K distance, Ackley had hoped to place in the top 15 and potentially make it to the NCAA national meet, which she said would’ve been a first for a Liberty freshman.

Instead, at about a mile and a half, she began feeling “a fiery pain coming up my leg, and it was getting worse, and it wasn’t flatlining at all”. She’d completed the first third of the race with a 6:55 time, which had her in striking distance of her goal, but instead had to withdraw from the race; Ackley said it was the first time she’d ever failed to complete a race she started.

“It was super weird watching everyone just run by, and wanting to go, but knowing I couldn’t,” Ackley said.

After racing alongside sisters and cousins for so much of her high school career, Ackley anticipated a big adjustment when she left her home state to run with a brand new team. While she found a lot of new experiences at Liberty, though, the adjustment was not as difficult as she thought it would be.

“The girls down there really took me in almost like a family, and often that happens with cross-country runners, at least on teams I’ve experienced,” Ackley said. “They’ve been really cool, and I’ve loved getting to know the team and racing with them.”

It couldn’t have hurt that Ackley was the team’s leading runner from the get-go. She took first place in the team’s first meet of the 2019 season, a small event with a field of only 40 runners from four schools.

Even for that size of event, the enormity of opening her collegiate career was a feeling Ackley still remembers well nearly a year and a half later.

“I remember thinking, okay, that one wasn’t too different from high school, because it was a little smaller,” Ackley said of that opening meet. “But when we moved on to bigger races, it was super fun, and I really enjoyed the number of people there.”

Part of the nerves, Ackley said, stemmed from the knowledge that her schedule wasn’t as full as it was in her high school days. The Flames had only seven competitions in 2019 prior to the regional meet.

Ackley certainly shook off her nerves quickly, though, taking first place at the team’s next meet, an invitational at Florida Gulf Coast, as well. She was the Flames’ top finisher in every race she completed.

After a fall spent gaining confidence, Ackley’s conference championship didn’t come as a huge shock to her, especially after Lipscomb senior Courtney Brenner, the defending conference champ who was viewed as one of Ackley’s top competitors, missed the 2019 season with an injury. Ackley added that one of the biggest reasons she was able to set a school record in that league meet was because of the presence of teammate Calli Parlier, who finished just two seconds behind.

It’s been a long and agonizing wait since then, but Ackley hopes once the Flames get back on the course, whenever that is, it will be worth it. She thinks the team should be very good in its next season, especially since everyone that raced in that 2019 conference meet is set to return.

“The team is looking really good this year,” Ackley said. “If we can race this spring, I think we’ll have a really good shot at being conference champs and also going to nationals. I’m hoping everyone stays healthy. I’m healthy right now and I believe almost all my teammates are.

“I’m looking forward most to what God is going to do with our team and to see how our team is progressing. I’m really excited to race at the regional and to see if we can make it to nationals.”