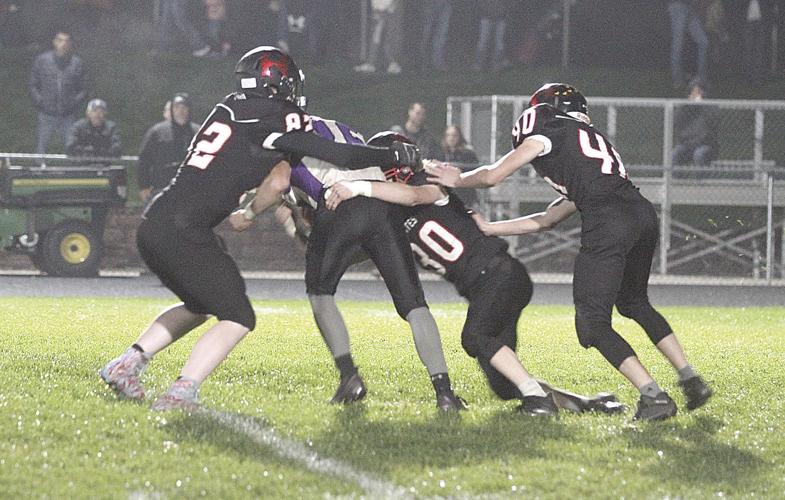 Hart defenders wrap up a Shelby ballcarrier during Friday’s WMC game at Hart. The Pirates won, 70-12. 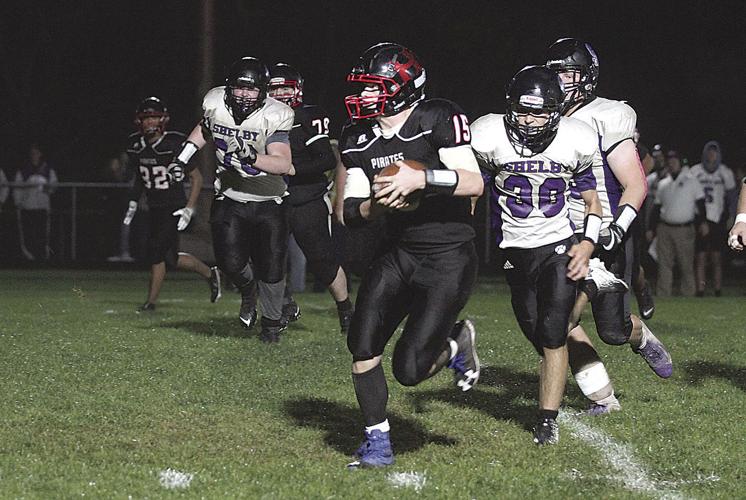 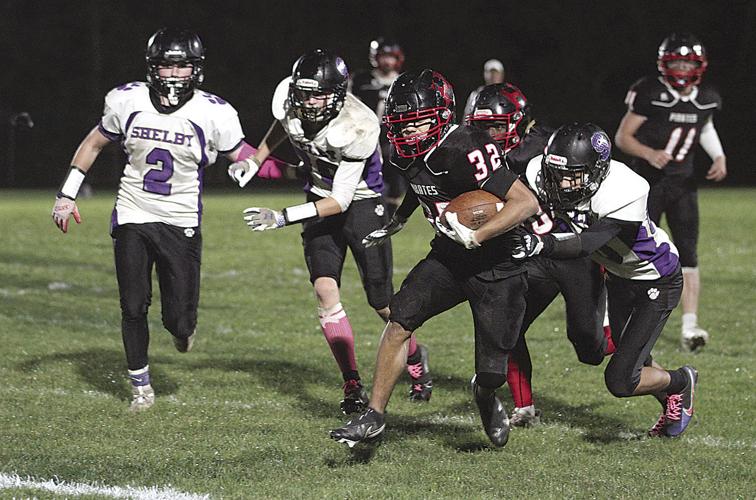 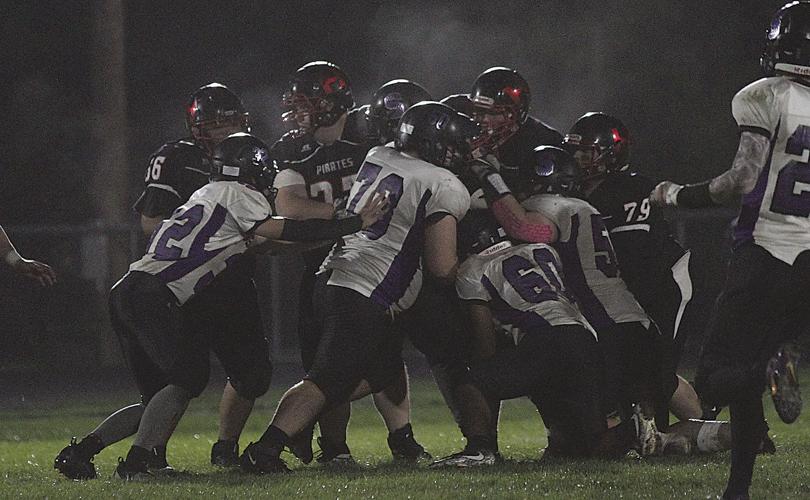 Hart’s defensive line bottles up Shelby’s rushing play during last season’s WMC game at Hart. The two teams hope the smaller-school Rivers division in the league beefs up turnout in the prominent sport.

Hart defenders wrap up a Shelby ballcarrier during Friday’s WMC game at Hart. The Pirates won, 70-12.

Hart’s defensive line bottles up Shelby’s rushing play during last season’s WMC game at Hart. The two teams hope the smaller-school Rivers division in the league beefs up turnout in the prominent sport.

Oceana County’s football season will end this week without a playoff bid for any team, but that doesn’t mean there’s nothing to play for — particularly in Hart.

The Pirates are riding high now after delivering the most lopsided beating in the history of the Hart/Shelby rivalry, a 70-12 victory Friday night. They close out this season with a winnable game against White Cloud.

Hesperia and Shelby, meanwhile, play each other, which means one of the two teams will be able to close a trying season on a high note with its first victory of the season. Which team that will be could be determined by the old sports cliche of ‘who wants it more’.

Hart’s victory over Shelby, coach Joe Tanis said, “was incredibly gratifying”. Apart from retaining the Blood, Sweat and Tears Jug for another year, the Pirates set several rivalry records with the win, including the biggest Hart margin of victory in the series (the previous mark was 45, back in 1957) and most points scored vs Shelby (previously 46, done multiple times).

It was also Hart’s third victory of the season, a number only the 2004 team that went 4-5 has exceeded this century. Tanis said the Pirates’ senior class will be remembered for its hard work in pushing Hart football in the right direction, with Friday’s win the latest benchmark.

“I can’t say enough about how this group of seniors have trusted us and helped pave the way for all that we have accomplished this year,” Tanis said. “These guys are really laying a strong foundation for us to build off of and any future success will be directly tied to what they did this year as a group. Setting records is going to be a great memory for many of our guys down the road and a point of pride when they look back.”

The Pirates (3-5, 1-5 West Michigan Conference) moved the ball at will in the win, racking up over 10 yards per play and 474 yards overall. With three first-quarter touchdowns staking Hart to a 22-0 lead, the Pirates were never threatened. Quarterback Kellen Kimes enjoyed a career day, completing 13-of-24 passes for 266 yards and five touchdowns, albeit with two interceptions. Kimes also ran for 53 yards and another score. On the ground, Chance Alvesteffer had 58 yards rushing and Joseluis Andaverde added 54, each with a touchdown. Alvesteffer also had 92 yards receiving and caught three scores from Kimes, and Andaverde had 49 yards receiving.

Tanis credited both lines for creating the opportunity for the skill players to post such impressive numbers.

“Our goal was to physically dominate up front and we felt like our linemen answered that challenge,” Tanis said.

Week nine’s biggest challenge is coming down off of cloud nine to battle White Cloud, which is likely to make the playoffs. If the Pirates won, it would give them three wins over playoff teams in one season (Holton and Kent City are also postseason-bound), which would be a program first.

On paper, Hart lines up well with the Indians, who two weeks ago took a 50-14 loss to the Kent City team the Pirates beat in week two. But with the season finale also coinciding with homecoming, focus will be key.

“Can we learn how to handle a small amount of success and show the maturity as a program to refocus on the task at hand?” Tanis said. “We will be using a bunch of small goals to help us draw our focus to being the best version of ourselves daily. I believe our kids know that having great practices is the key to success for us.”

Some of those small goals Tanis has set for his team include scoring 30 points five times in one season, which would be a Pirates’ record, allowing under 300 total points for the first time since 2004 (they’ve surrendered 269 to date) and, most importantly, matching that ‘04 squad for the program’s best record this century.

“All of those are things we can accomplish this week if we put in the work the way we need to,” Tanis said. “We just feel those are really important things to help set the stage for a great off-season.”

The Indians are licking their wounds after being blasted 50-0 by White Pigeon last week, a game in which they managed only 14 total offensive yards. White Cloud has only one win since week three.

It sets the stage for what could be a good Friday for the Pirates, if they do the work.

“I expect an emotional week and the perfect opportunity to really show how far we have come this year as a program,” Tanis said.

The intracounty battle between Hesperia and Shelby will feature two programs starving for positive news. Both are 0-8 and have had struggles this year, perhaps none more so than last week. The Tigers took a hard-to-swallow 70-12 beating from Hart, while Hesperia was routed 56-0 by Manistee.

The Tigers are likely coming in with a more positive atmosphere despite the Hart loss. Shelby can at least hang its hat on the fact that it doubled its offensive scoring output for the season with the two touchdowns it managed against Hart.

Nick Baffi got Shelby (0-8, 0-7 WMC) on the board early in the second quarter, snatching a pass from Isaiah Garcia and racing 87 yards to the house, briefly giving his team a shot of momentum and cutting Hart’s lead to 22-6. The Tigers then answered Hart’s resulting touchdown drive with an 82-yard kickoff return for a score by Cade Clement. However, Hart did score the final 40 points of the game after that.

Still, coach Phil Fortier saw plenty to create optimism. He felt his team had its best defensive game of the season from a tackling perspective and also performed comparatively well against the run, and of course busting out a couple of big scoring plays didn’t hurt. While the results on the scoreboard have been lacking, the team continues to work hard and create a positive atmosphere in practice.

“Our guys are relentless,” Fortier said. “They believe in their ability to improve each week. If anything, the coaches and players are more determined than ever. I can’t say it hasn’t been a difficult season because it has been, however, there is a tremendous unity our team has. Practice is fun and our guys love playing football. They enjoy doing this together and I think that is the key to our resilience.”

Garcia had 103 yards passing overall. Clement ran for 19 yards, and Trey Waller had 16 yards receiving. Waller also led the defense with five tackles and an interception; Phillip Hayes also had a pick.

With the Tigers facing an opponent that has faced just as long odds as they have this season, it’s the culture, Fortier said, that will be as important as anything else at determining this week’s outcome. On the field, he said blocking and tackling will be keys.

“It’s that kind of culture that is going to allow us to become more competitive in the future,” Fortier said. “The game of football is important. It has too much to teach us about ourselves and each other. The young people in this community need to be playing this game.”

On Hesperia’s end, inexperience, caused by injuries, has been the major issue. Coach David Smith said his team is starting four freshmen and three sophomores, a tough thing to overcome for a squad lacking in substitutes.

“The kids are playing hard,” Smith said. “Physically they are not ready to play varsity football, but they are giving it their all.”

On the upside, the Panthers (0-8) will bring back two linemen for this week’s game, which should give each side of the ball a boost.

It’ll be a boost that’s needed. Hesperia played reasonably competitive games each of the first three weeks, but injuries and a COVID-19 outbreak submarined things, and it’s lost by 41 points or more every game since. The Chippewas were able to string together explosive plays on offense and make Hesperia’s life miserable on defense last week.

The two county foes will take the field in Shelby Friday night and each look to create a positive memory heading into the off-season.