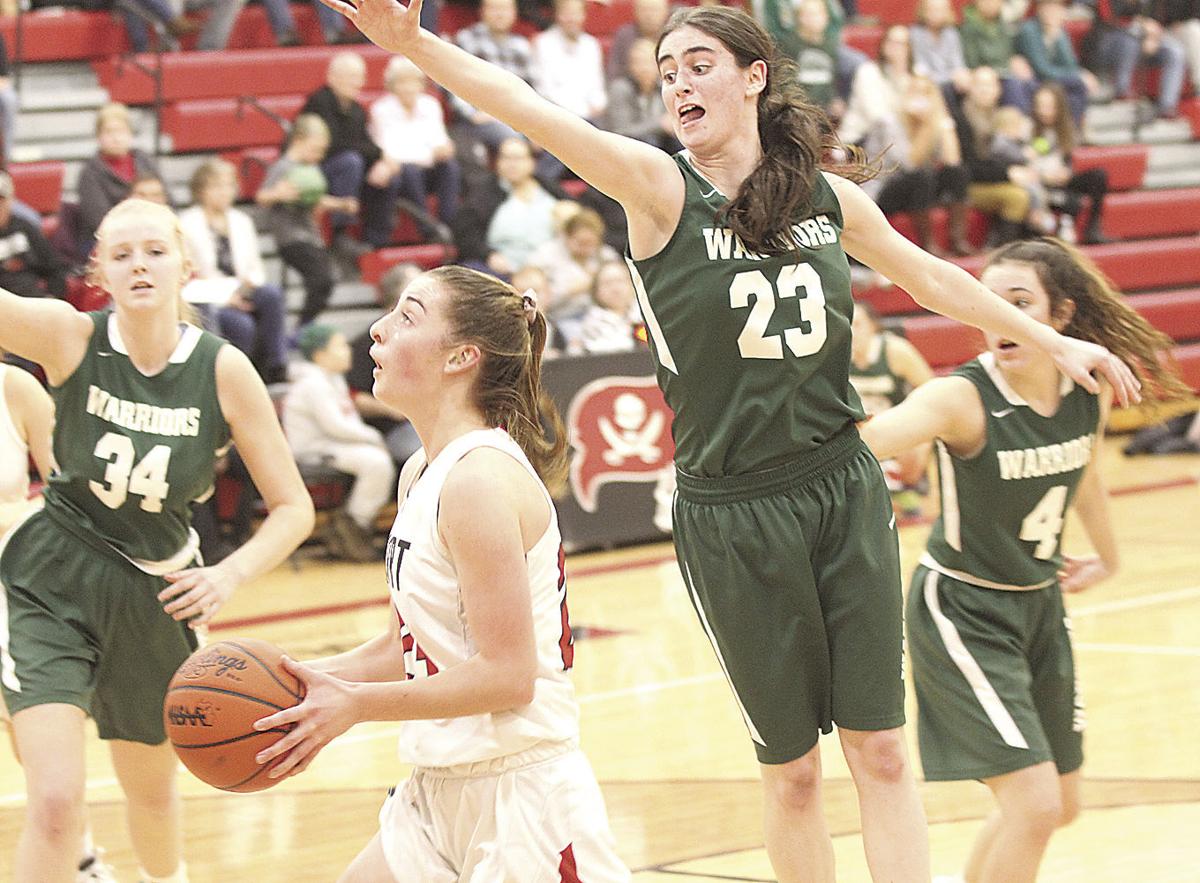 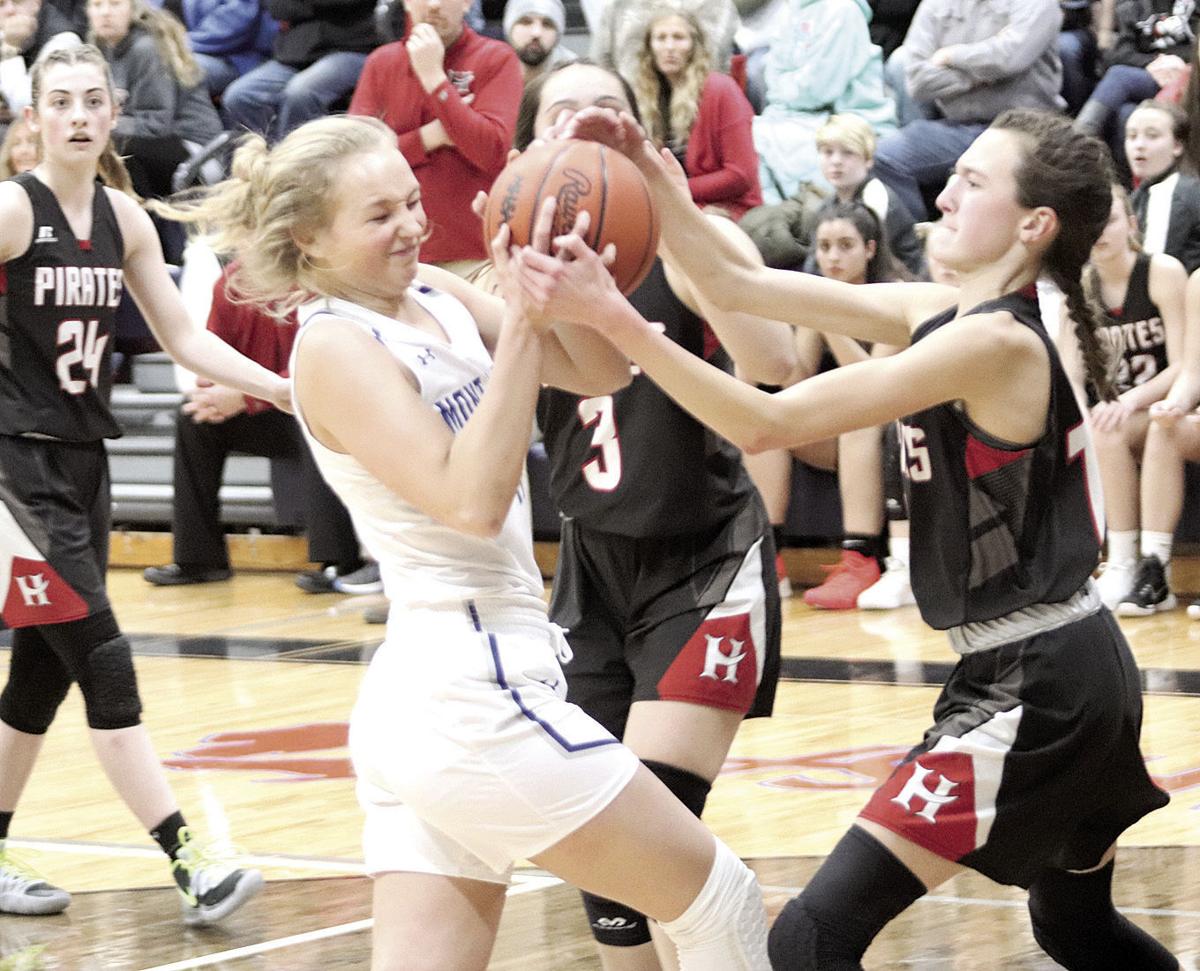 Hart’s Morgan Marvin (right) and Montague’s Ally Hall wrestle for a rebound during a game last season. Marvin looks to fill a key bench role for the Pirates this season. 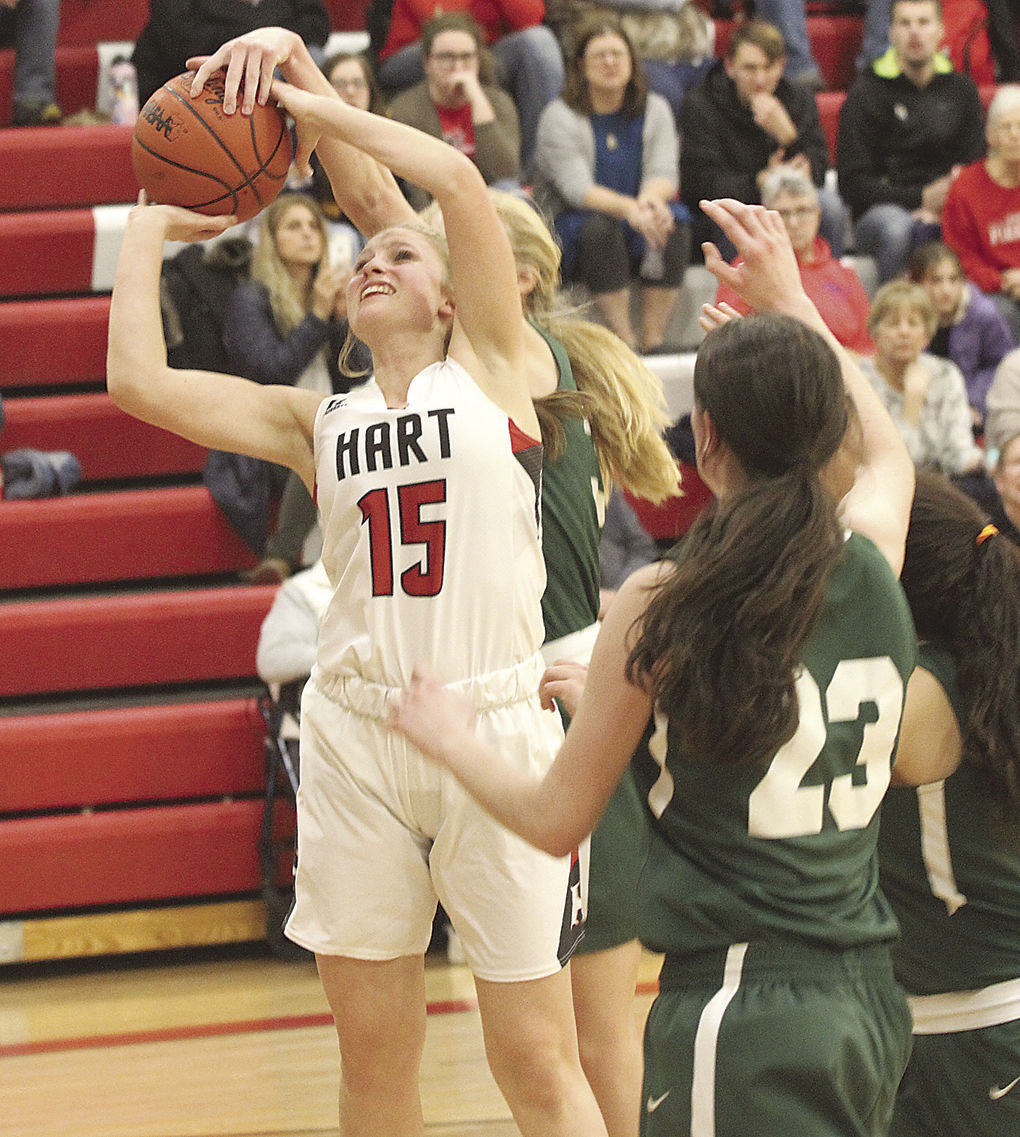 Hart’s Cassidy Copenhaver is fouled on a shot attempt during a game last season against Western Michigan Christian. Copenhaver is one of Hart’s leaders in the frontcourt.

Hart’s Morgan Marvin (right) and Montague’s Ally Hall wrestle for a rebound during a game last season. Marvin looks to fill a key bench role for the Pirates this season.

Hart’s Cassidy Copenhaver is fouled on a shot attempt during a game last season against Western Michigan Christian. Copenhaver is one of Hart’s leaders in the frontcourt.

Hart came within a whisker of swiping a West Michigan Conference title last year, and repeated as district champions. The Pirates hope they’re on course to bring home more trophies this season.

They have a great place to start in junior Jayd Hovey. The Pirates’ star has earned all-state mention each of her first two seasons and is the driving force behind Hart’s offense, while also being a very capable defender. She averaged 15 points, five rebounds and five assists per game last season despite drawing increased defensive attention.

Four other players who have started multiple games for Hart are also back, including Kendall Williamson, who missed most of last season with a knee injury but is now healthy. Last season’s freshman breakout player, Aspen Boutell, returns as well, as do steady performers Rylee Noggle and Cassidy Copenhaver.

The Pirates’ biggest issue is likely finding the person who will replace the all-around game Nicole Rockwell brought to the team. Rockwell is the team’s biggest of five graduation losses.

“Nicole played four years of varsity basketball, and her knowledge of the game and scoring ability will be missed,” Pirates’ coach Travis Rosema said. “That said. I am confident in the players who will be replacing the seniors we have lost.”

Williamson and Boutell seem the most likely candidates to fill in the gaps left behind. Williamson was an honorable mention all-WMC player last year despite missing much of the season, and Boutell is a gifted ballhandler and defender.

Noggle, who made several key plays in the postseason last year, will be looked to for consistent performance, and Copenhaver joins her in the post. Each forward is very athletic and plays with high energy, a perfect match for the Pirates’ speed in the backcourt.

Morgan Marvin, who played a big bench role after being called up from the JV to replace Williamson last year, will likely fill a similar role this year. Marianna VanAgtmael also comes up from the JV. Each player should see their moment to shine in 2021.

While the off-season was disrupted repeatedly by the coronavirus pandemic, Rosema said his players did a good job doing what they could, including some playing on summer travel teams.

“We have a great group of players who have bought in and taken ownership,” Rosema said.

Hart wants to get the WMC title it narrowly missed out on last year when it fell to Montague in triple overtime to end the regular season. The Wildcats will be a big obstacle again this year, and Shelby gave the Pirates good battles throughout last season. Whitehall is always a factor.

The Pirates have beefed up their schedule to the best of their ability, highlighted by a scheduled non-conference battle on the road against Division 3 powerhouse Kent City. Hart will also face Western Michigan Christian and Calvary Christian; the Pirates also tried to get Ludington on the schedule, but the game fell through.

Rosema said his team is trying to stay focused on what’s within its control amid the pandemic uncertainty — playing good basketball.

“The challenges presented by the COVID pandemic are not unique to Hart,” Rosema said. “We are facing the same challenges as every school throughout the state.”