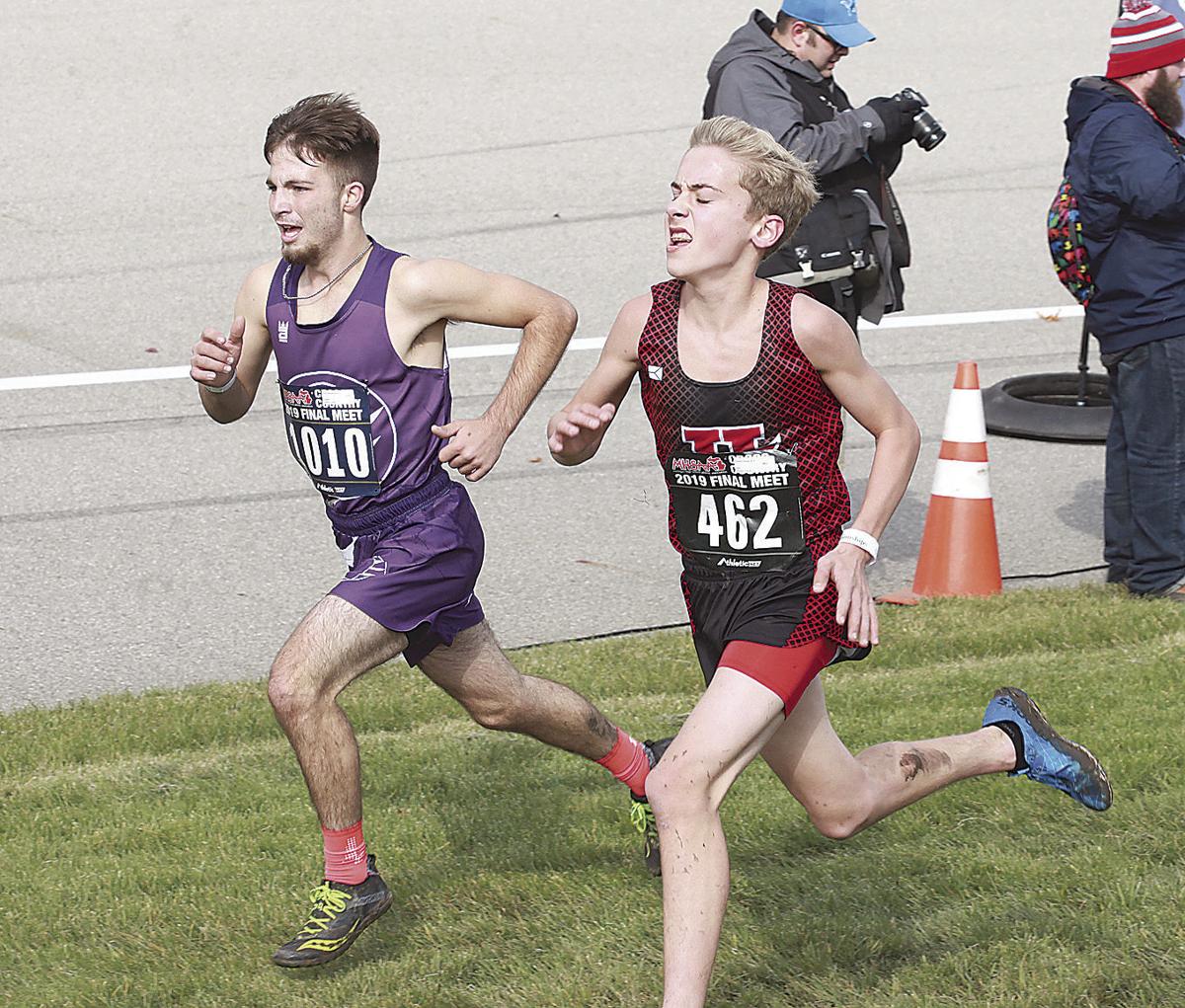 Hart's Clayton Ackley (right) tries to chase down Onsted's Ivan Westgate at the finish during Saturday's Division 3 state cross-country meet at Michigan International Speedway. Ackley passed Westgate and finished 54th for the Pirates, who placed fifth as a team. 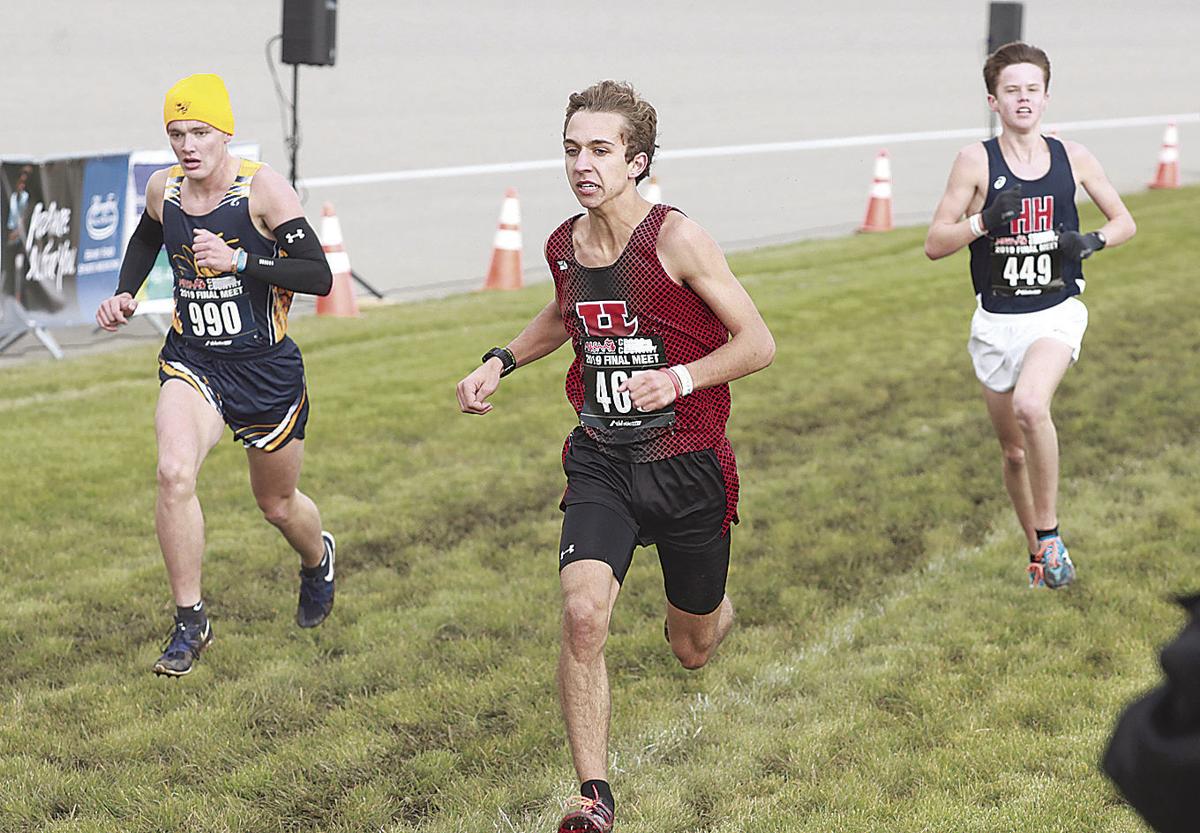 Hart’s Alex Enns (center) closes in on the finish line at Saturday’s Division 3 state cross-country meet at Michigan International Speedway. Pursuing are Ithaca's Braxton Lamey (left) and Hanover-Horton's Garrett Melling. The Pirates earned a fifth-place finish, their best ever, at the meet. 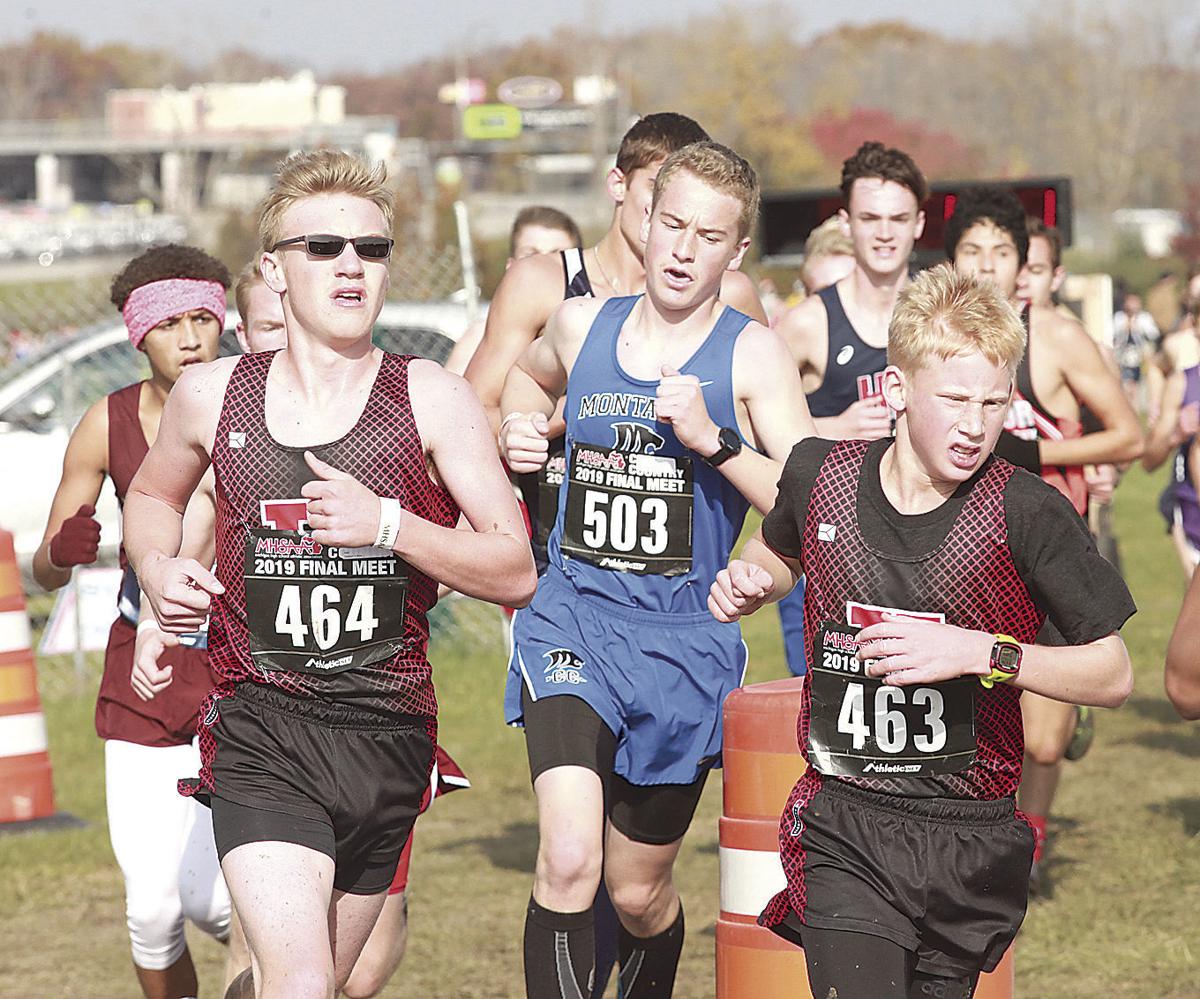 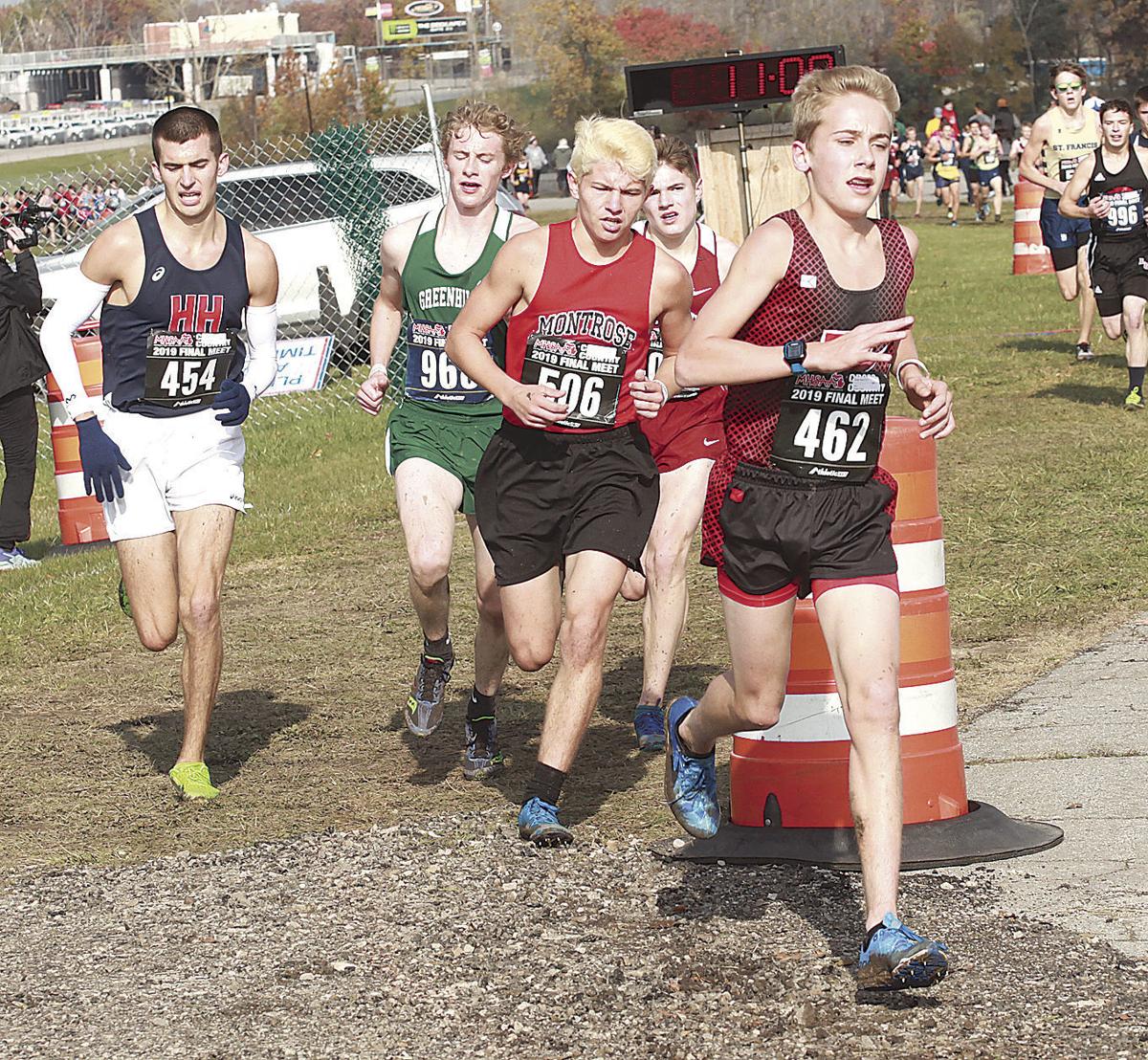 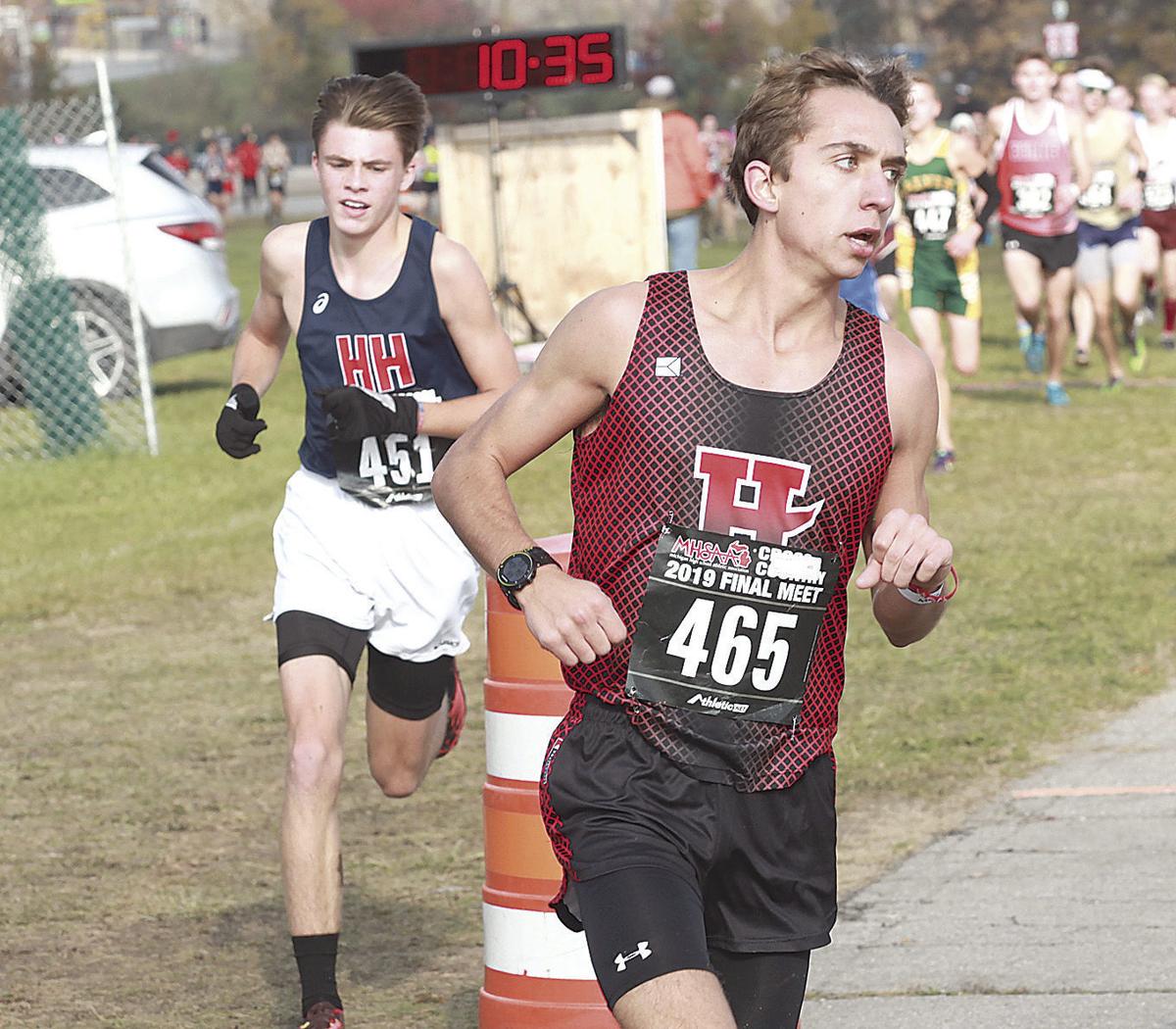 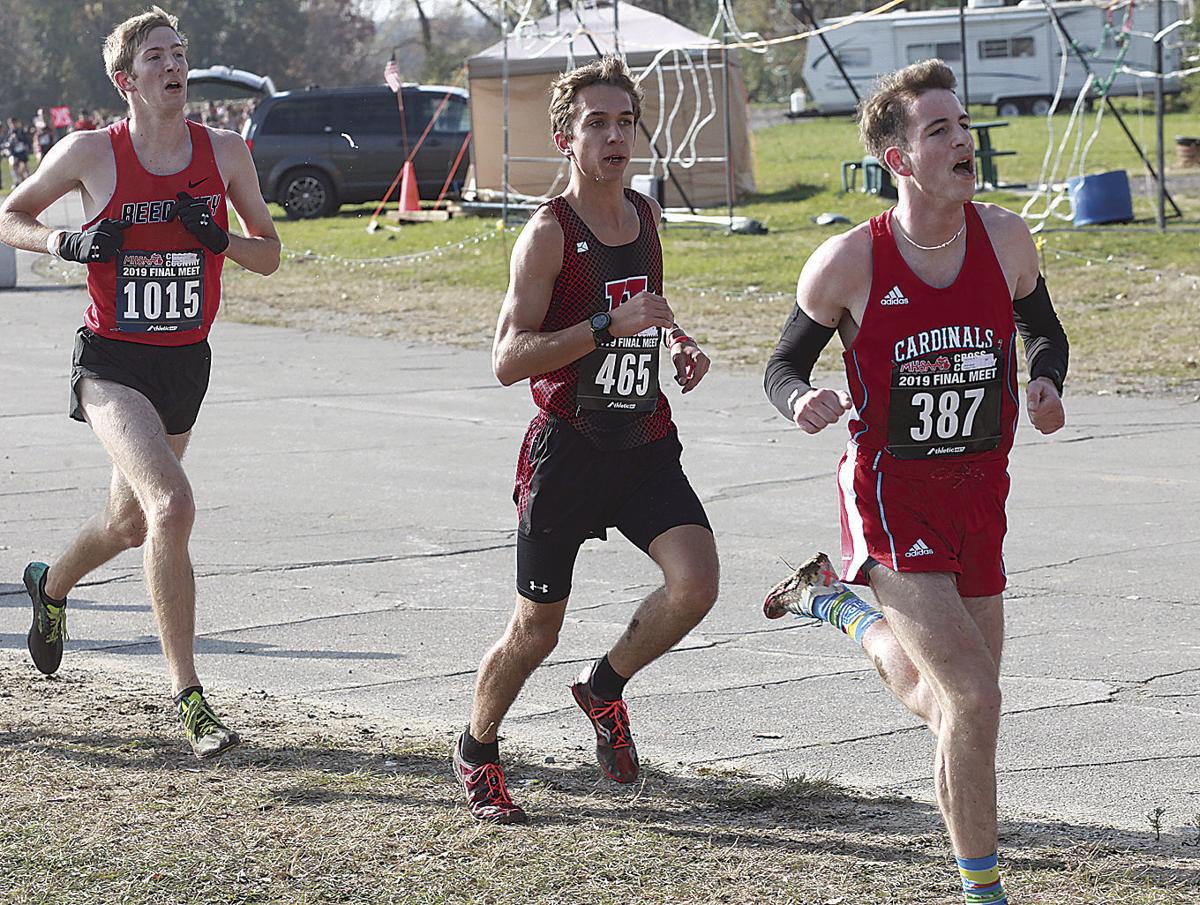 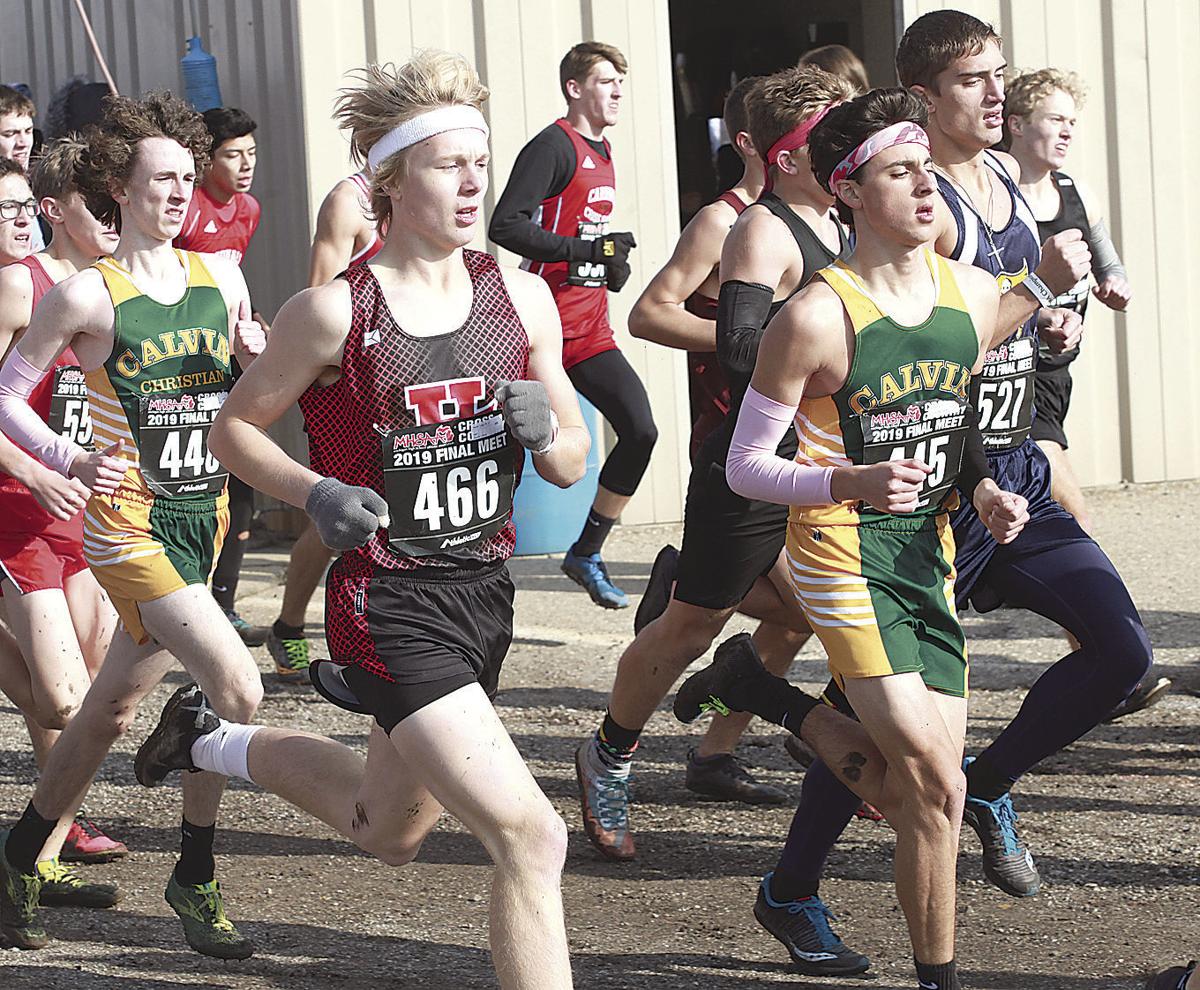 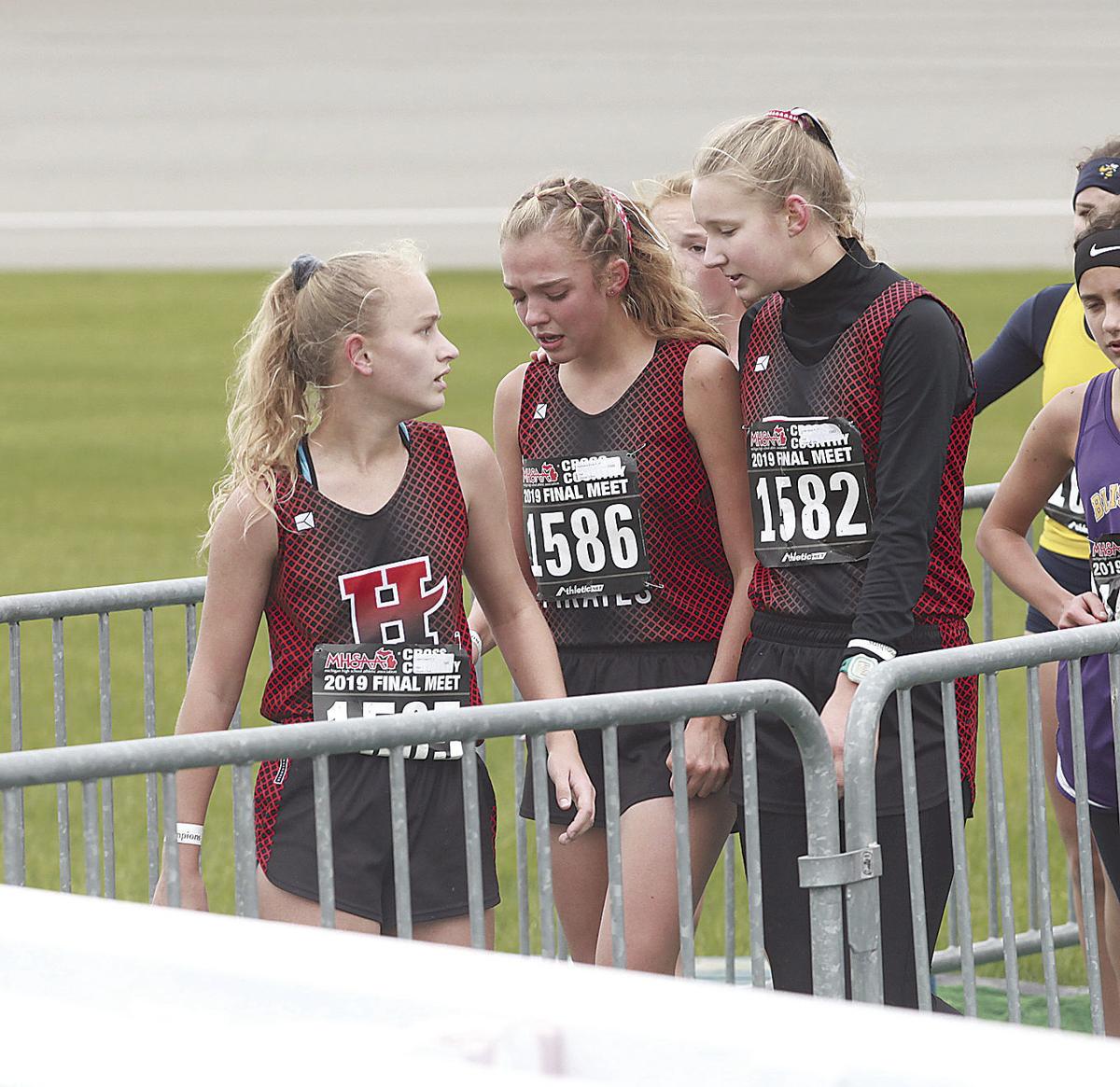 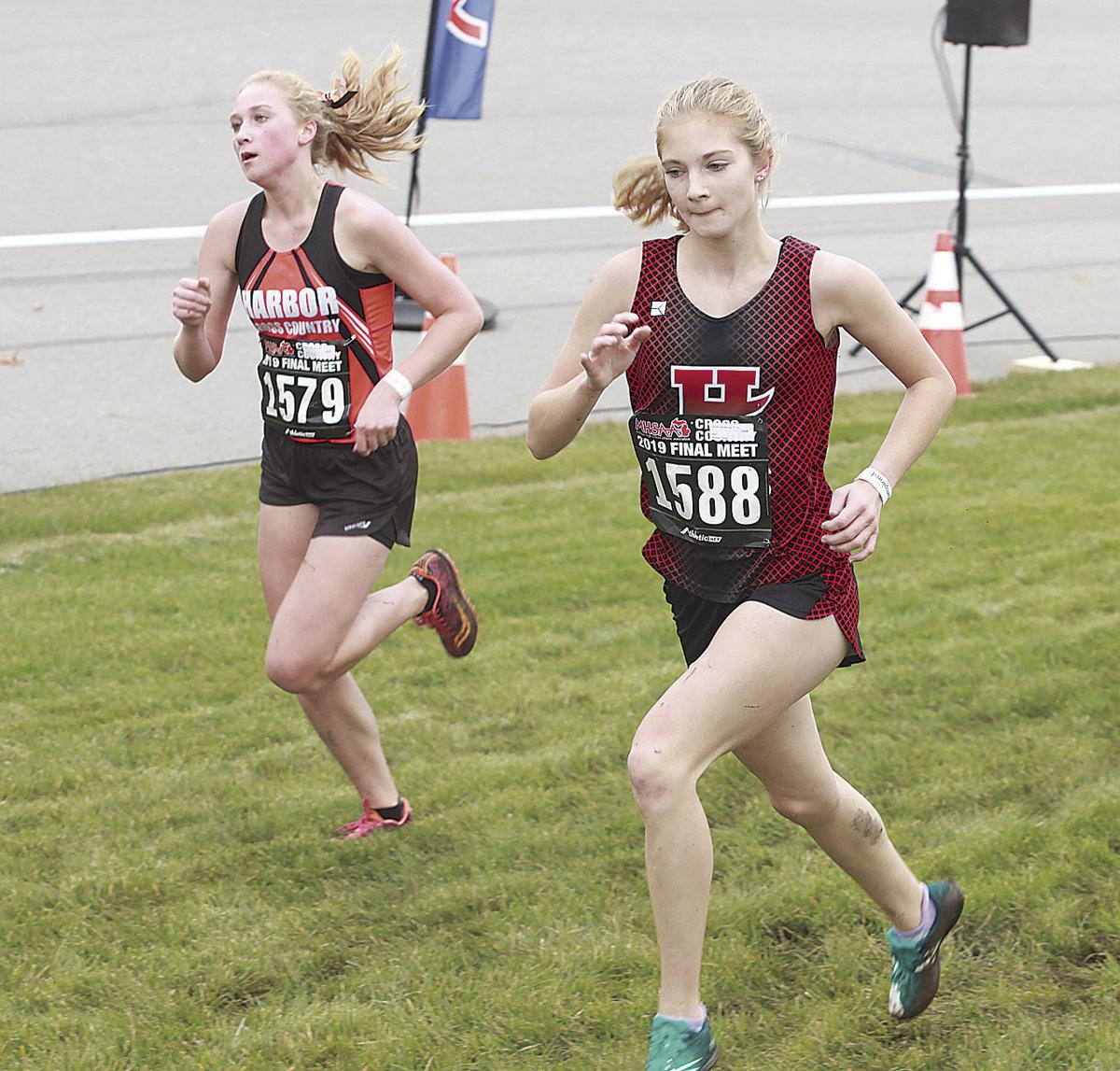 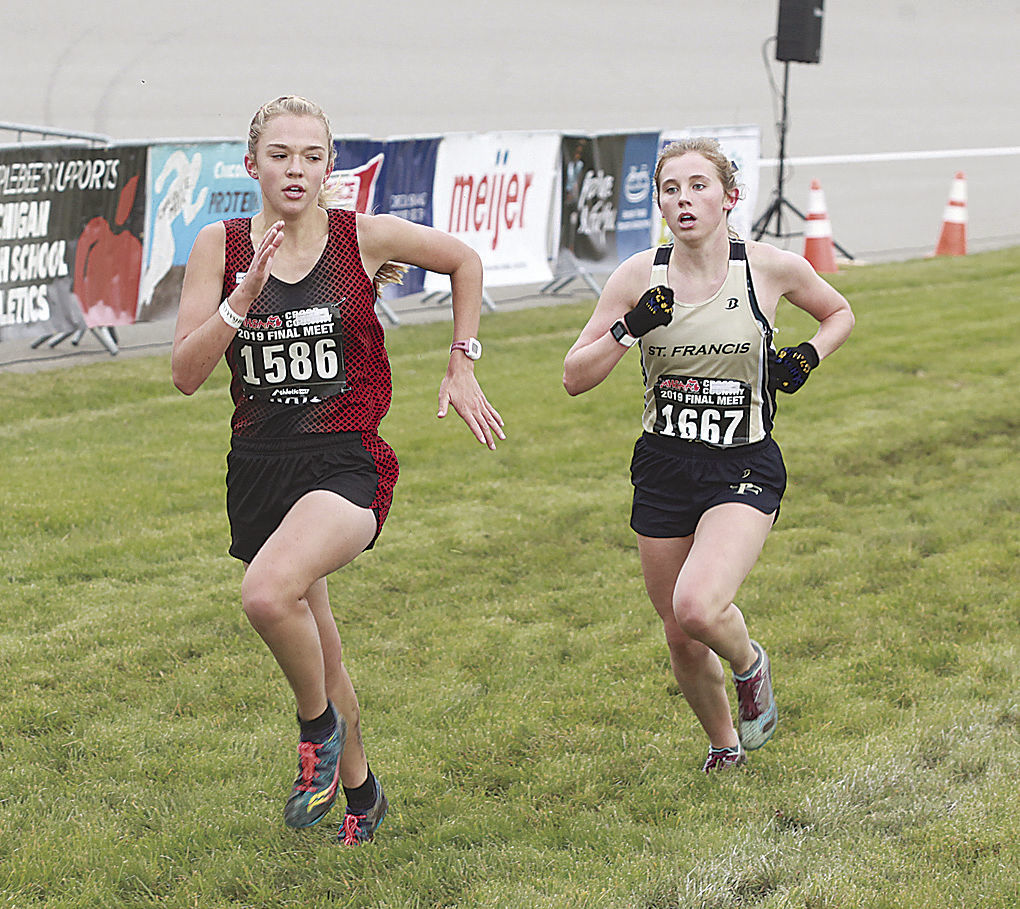 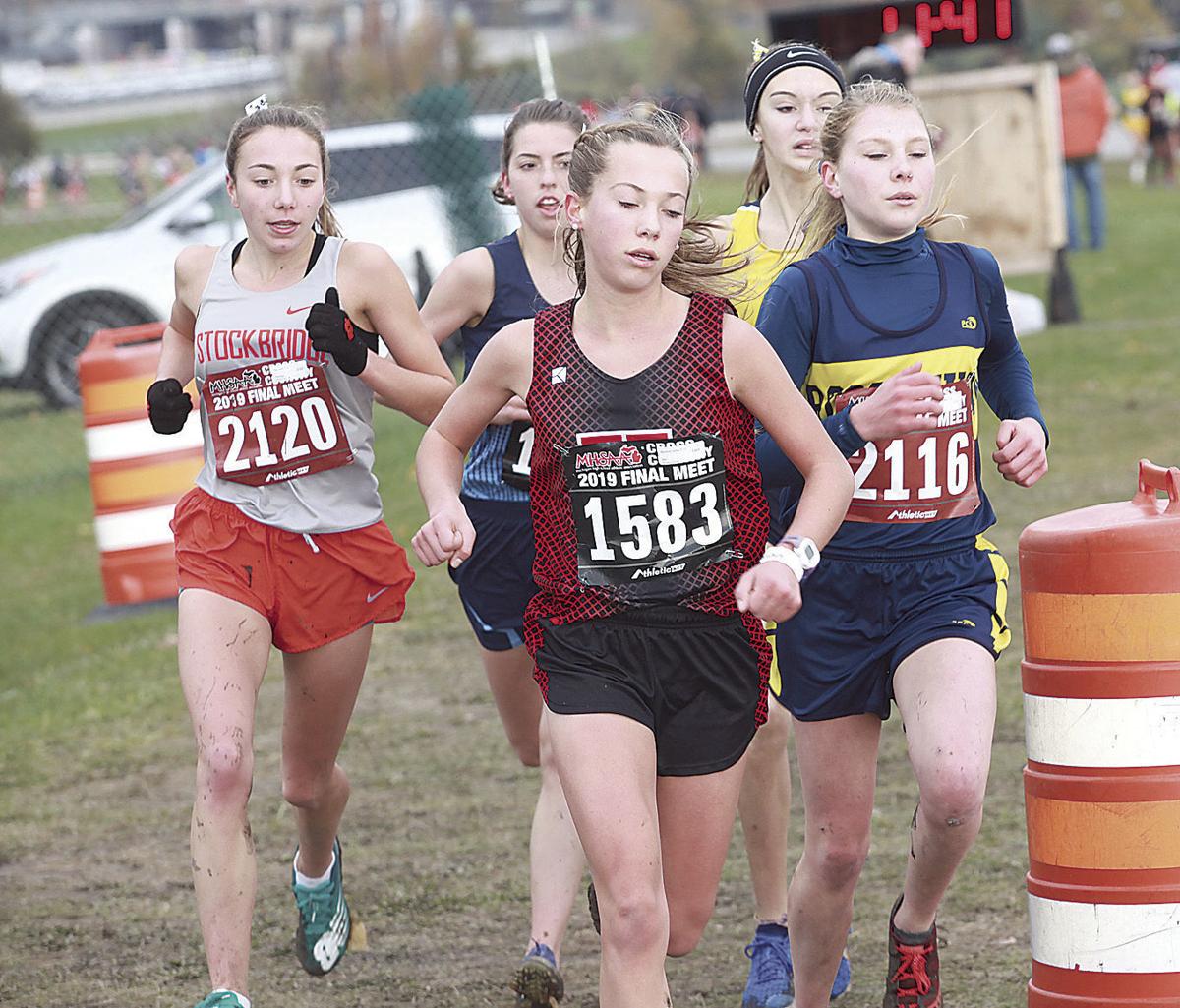 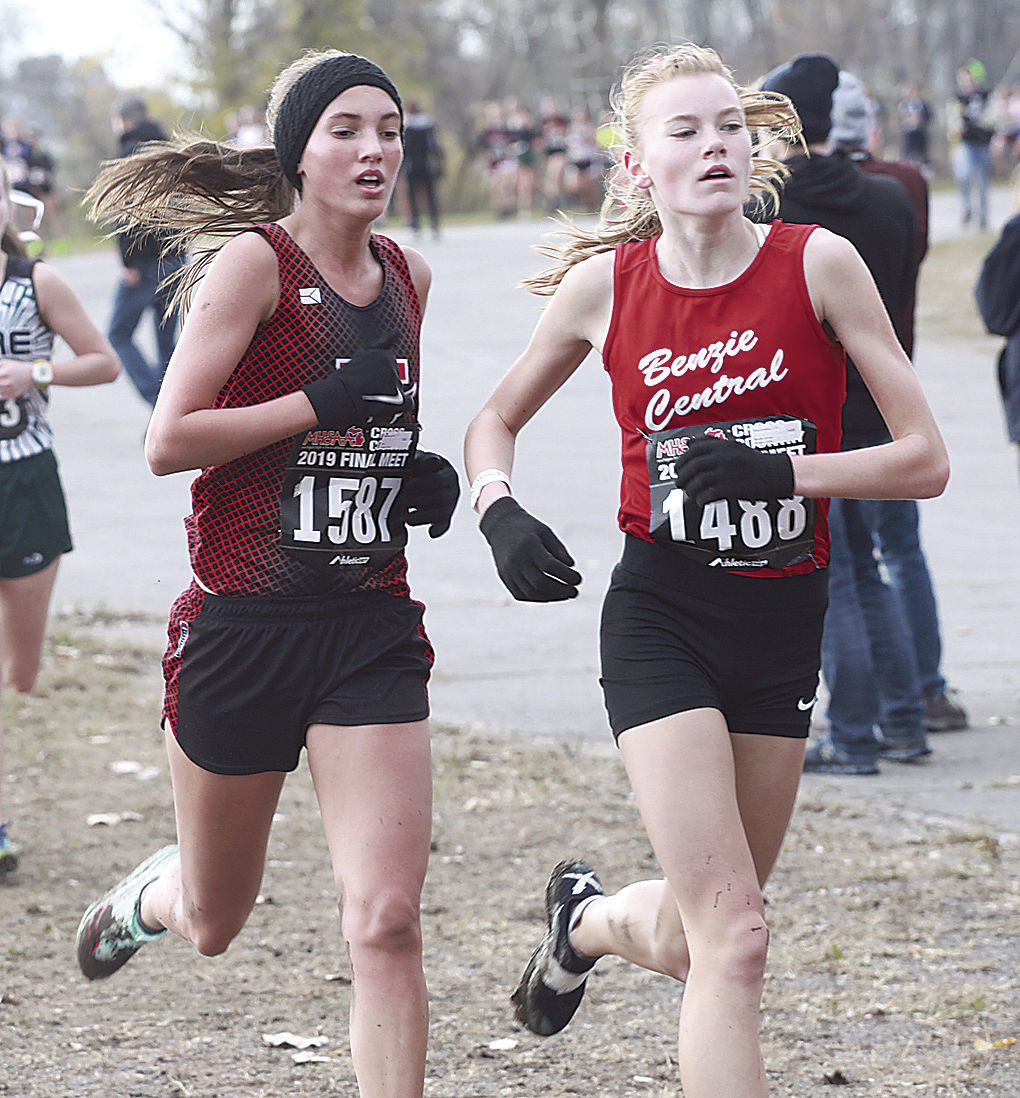 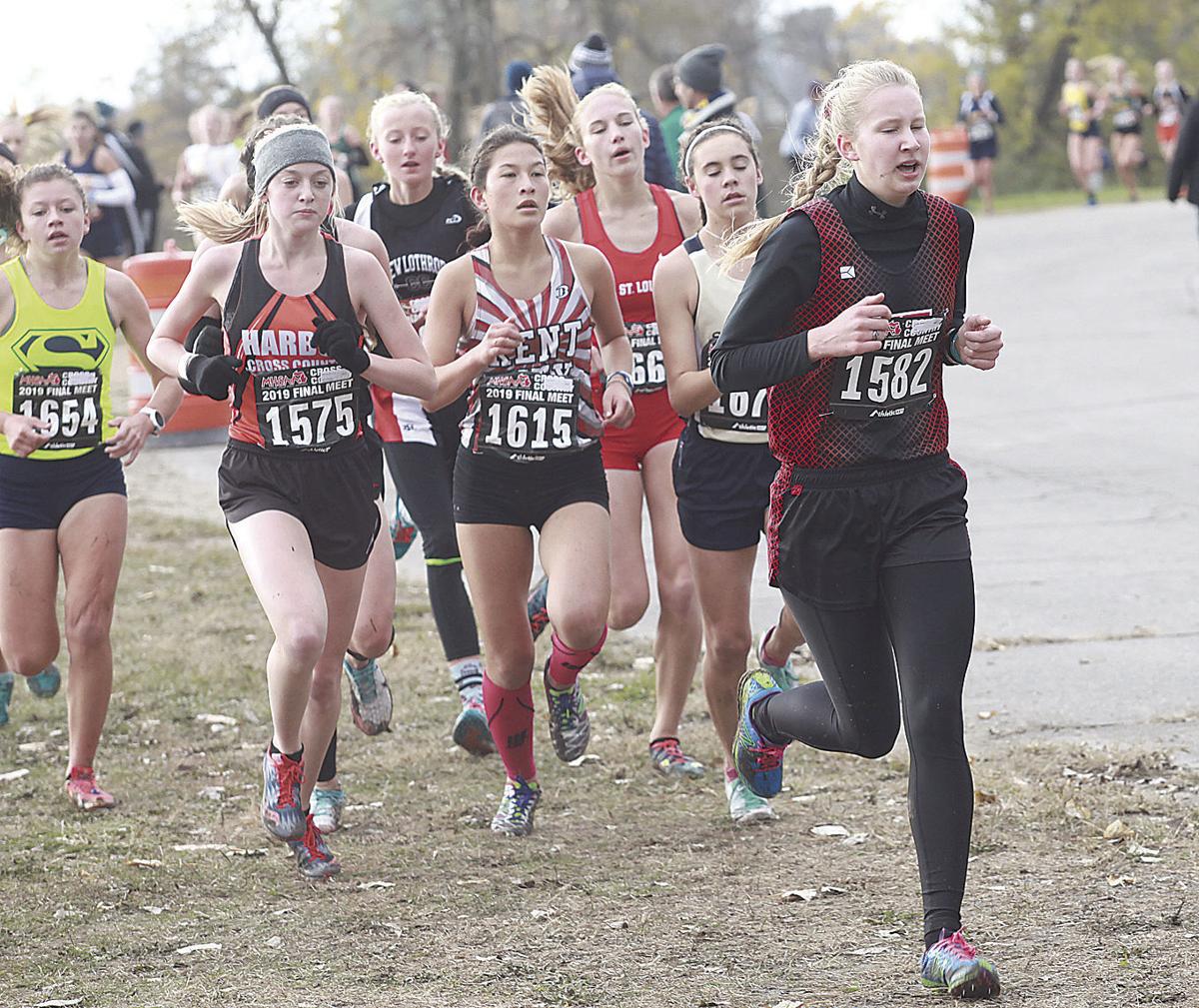 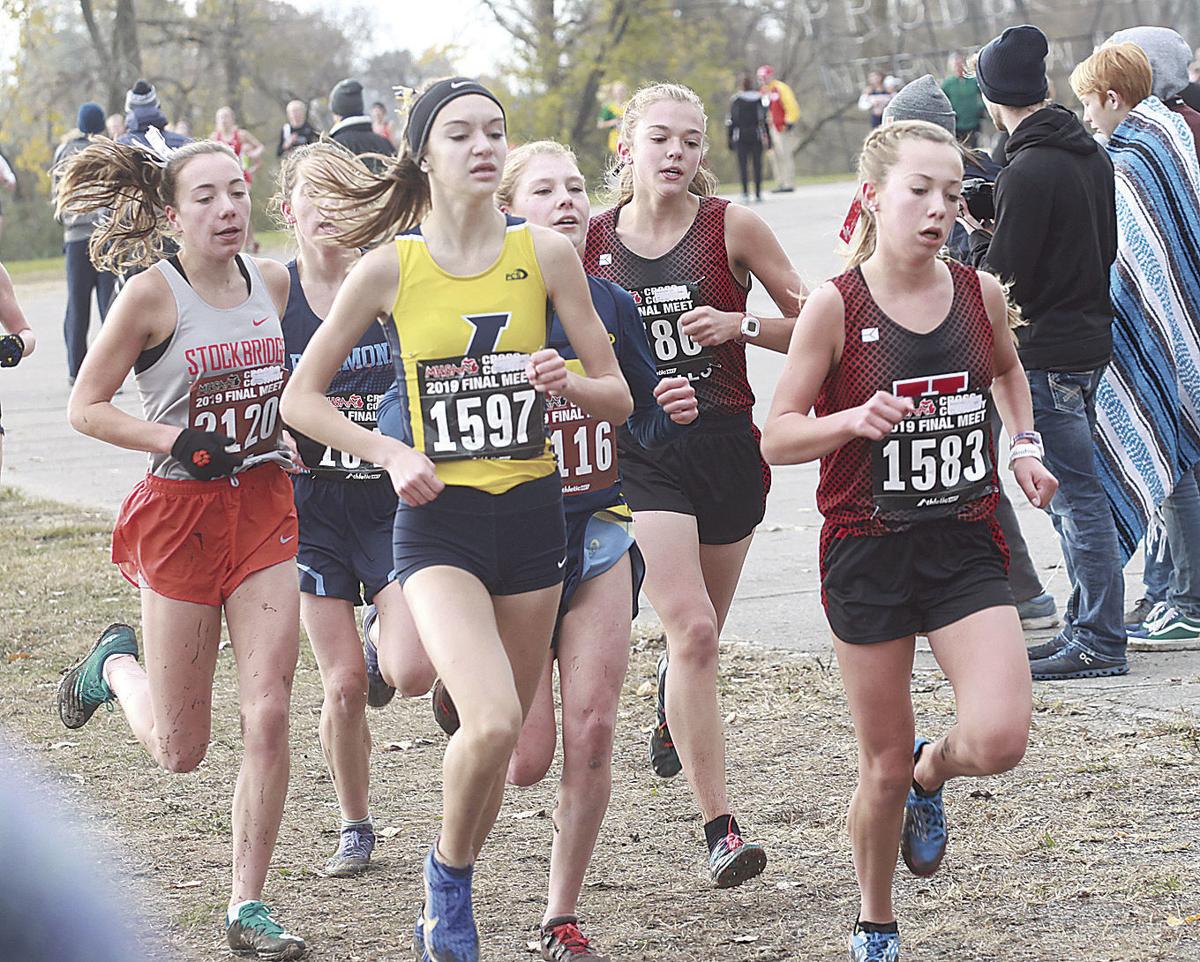 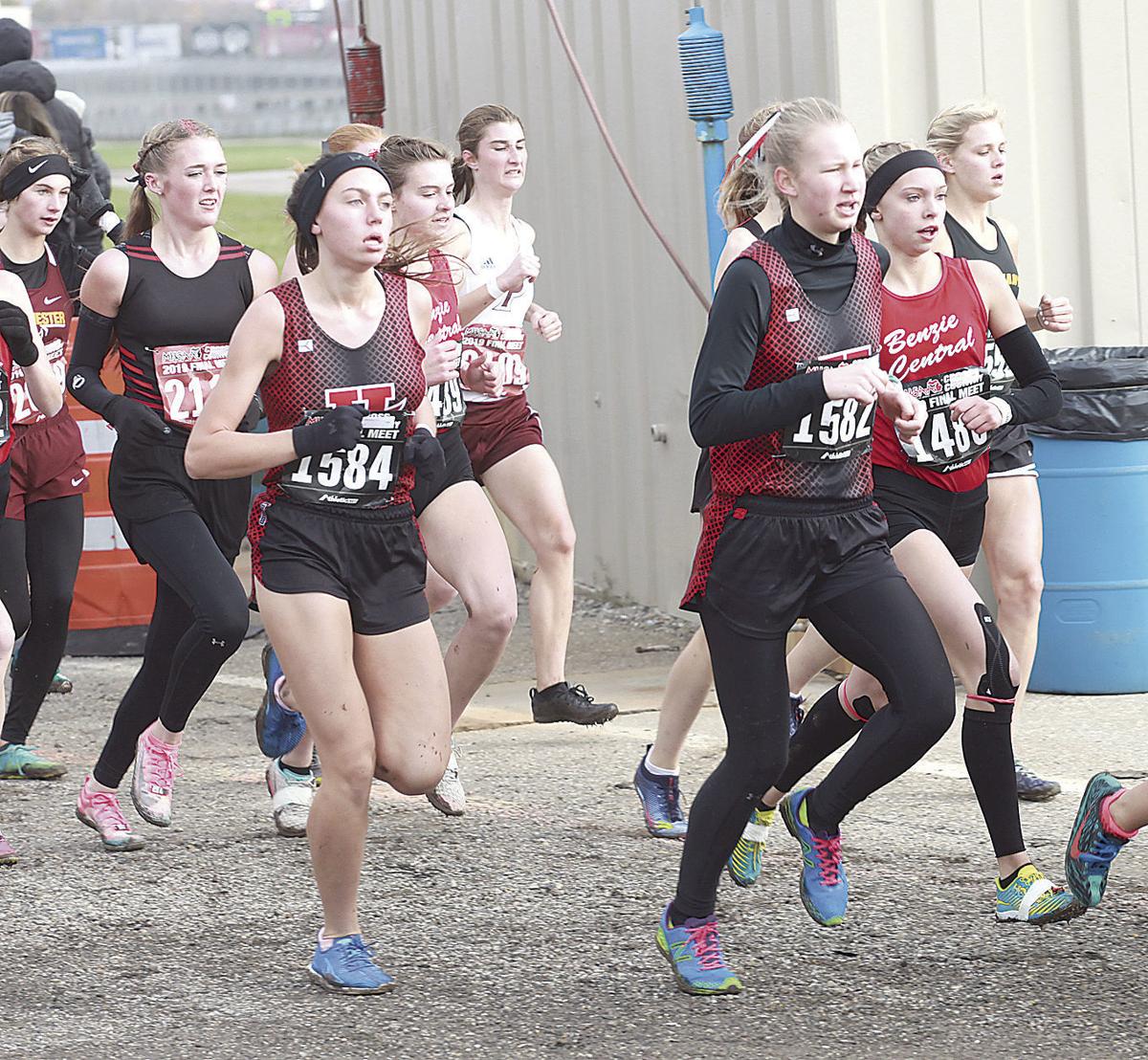 Hart's Clayton Ackley (right) tries to chase down Onsted's Ivan Westgate at the finish during Saturday's Division 3 state cross-country meet at Michigan International Speedway. Ackley passed Westgate and finished 54th for the Pirates, who placed fifth as a team.

Hart’s Alex Enns (center) closes in on the finish line at Saturday’s Division 3 state cross-country meet at Michigan International Speedway. Pursuing are Ithaca's Braxton Lamey (left) and Hanover-Horton's Garrett Melling. The Pirates earned a fifth-place finish, their best ever, at the meet.

BROOKLYN — If not for a malfunctioning scoreboard, Hart’s third straight state championship in girls cross-country, an incredible feat, would have been stress-free.

The Pirates easily took home the trophy Saturday at Michigan International Speedway, scoring 77 points to second-place Shepherd’s 133. But that wasn’t clear at the finish line, when the live scoreboard had a glitch that saw Hart tumble down the live standings, spooking coach Terry Tatro.

“It was the worst feeling I’ve ever had coaching in 20 years was that feeling of having thought that we lost that state championship,” Tatro said. “They had Shepherd first, Calvin Christian second, Hart kept dropping. We were like fourth, then fifth, then all of a sudden the board went blank. I thought, my goodness, we finished in fourth or fifth place.

“So I’m walking all the way back to our tent thinking, what am I going to tell these girls? How can I soothe them? I get back to the tent, and they said, ‘No, we won!’ And I was like, you’re kidding me.”

Hart’s win put it in exclusive company: In the 43-year history of the Lower Peninsula state meet, only 14 other schools have ever managed to win at least three titles in a row, seven each in the boys’ and girls’ meets. Most recently, Mount Pleasant Sacred Heart had won four straight D-4 girls’ titles from 2015-18 before that streak ended Saturday. (Only five schools, Sacred Heart included, have ever gone past three.)

The Pirates had three of the top 14 finishers to secure their victory. Savannah Ackley led the team in fourth place, with a time of 18:49.0, and Audrey Enns was next across in fifth, posting a time of 18:56.2. Lynae Ackley was Hart’s third all-state runner, placing 14th in a time of 19:26.2.

The trio, all cousins, have combined to earn all-state honors all seven possible times — Savannah is a junior and the other two are sophomores.

The MIS course, already taxing on the easiest of days, was muddy due to wet conditions most of the week, which slowed down most runners’ times. Still, the Pirate all-state runners were pleased with their performances.

“I was pretty happy with it,” Enns said. “I think I could’ve done better, but I think I had a good race considering all the mud. It’s a pretty hard course.”

Everything went relatively smoothly on race day, but Tatro said he sensed coming into the race that his team was more nervous than it had been for the previous two titles, as perhaps the enormity of their accomplishments began to sink in.

“I think they were more nervous this year than I’d ever seen them the last two championships,” Tatro said. “You could tell. The pressure was really on. Everybody expected them to win. I think that was just a lot of added pressure they hadn’t dealt with before. Before, it had been, ‘We could win the state championship. Yay! We won the state championship! We won it twice!’ But now it’s all of a sudden like, you guys have to do a three-peat or whatever.”

However, with that now accomplished, here’s a scary thought: Tatro said the 2020 team is lining up to potentially be his best team yet. Aerts is the only one of the seven girls who ran Saturday who will graduate, and the Pirates will bring in yet another dynamo from the Ackley family tree in eighth-grader Alyson Enns, Audrey and Alex’s sister, whose personal best at the two-mile distance is 11:22. Extrapolated to the 5K distance, that would likely put her among the top three of Hart’s 2019 team.

“Another Ackley cousin,” Tatro said with a smile. “Someone else was asking me to explain it and I was like, ‘Well, you’ve got two, no, three cousins, two sisters, I don’t know. There’s a bunch of them. They’re all related.’”

While the Hart girls’ team was making history, the boys’ squad made a little history of its own, placing fifth, up one spot from last year and setting a new benchmark for the best finish in program history.

Hart boys fall down early in loss to Montague

In a mark of how much the Pirate squads have accomplished, though, even that finish came with a little melancholy, as Hart was 19 points shy of the runner-up position, earned by Calvin Christian.

“You have to look at the bright side,” Tatro said. “That’s the best finish we’ve ever had for a boys’ team in cross-country. You always look at that 19 points, though. That’s nothing in this race. A couple of seconds here and there between the 1-5 runners and we could have had a second-place finish.”

Alex Enns led the Pirates for the third time in his three seasons, coming in sixth place to claim his second straight all-state finish. His time was 16:20.3.

“They all ran well, given the conditions and stuff,” Tatro said. “Obviously, if you were to ask them, they’d say they could have run better. But it is what it is. They ran great and I couldn’t be prouder of them.”

Like with the girls, the Pirates could be even better next year, as Tubbs is the only senior who ran Saturday. The team has largely been relegated to the back-burner as the girls have cemented their place as a dynasty, but perhaps next fall could be different.

“It’s tough running in the girls’ shadow, getting all the accolades and stuff,” Tatro said. “We have a really good group coming back, and we have young freshmen that are all doing really well.”

The Pirates were as hardworking this year as Tatro can ever remember, which he credited for their success.

“This group, I think, has just been probably, both boys and girls, one of the best groups we’ve ever had, as far as the hard work ethic, helping each other out in races and stuff,” Tatro said. “We always talk about grouping up real tight and trying to pull each other along and encouraging each other. They’re just all about that.”