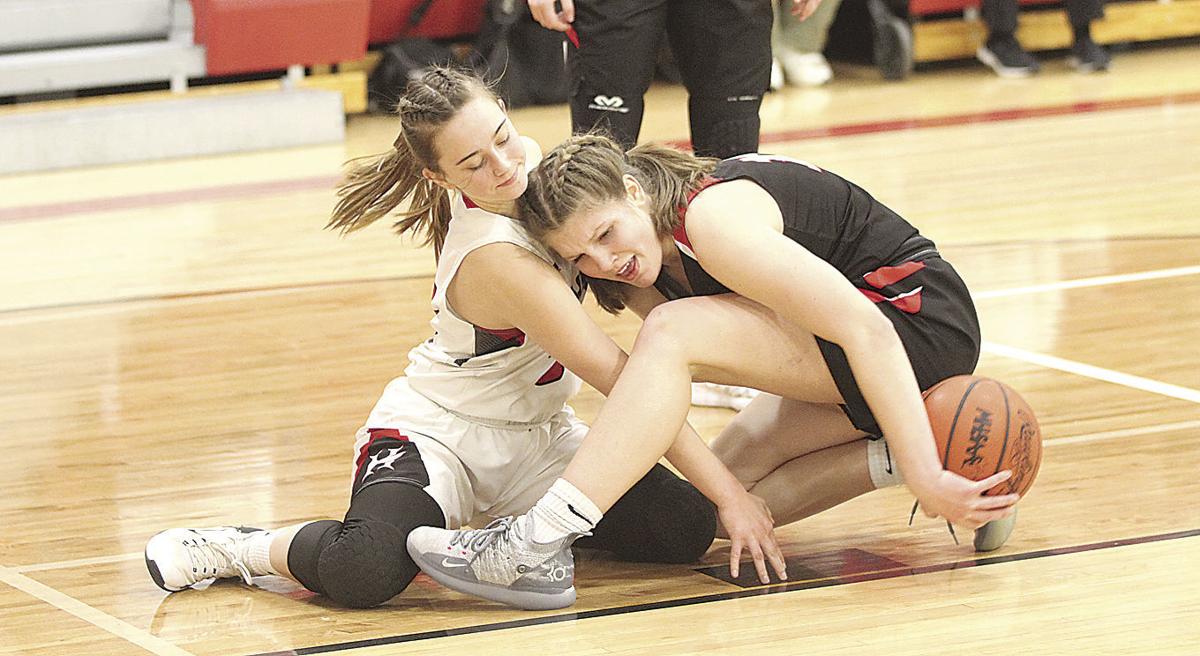 Hart’s Taylor Munoz (left) tries to wrestle the ball away from Whitehall’s Karoline Glamzi during Tuesday’s WMC game at Hart. The Pirates lost, 52-43. 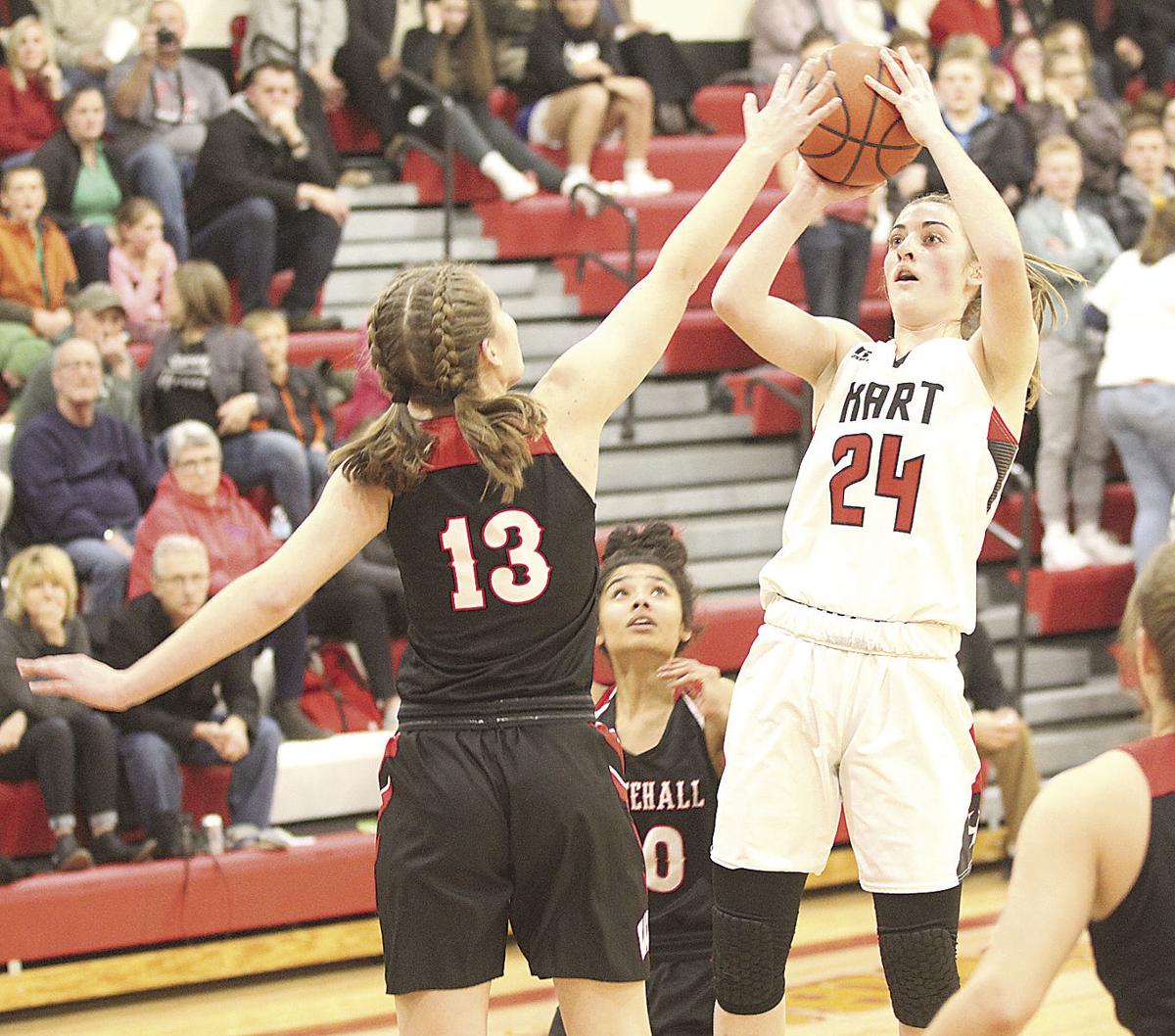 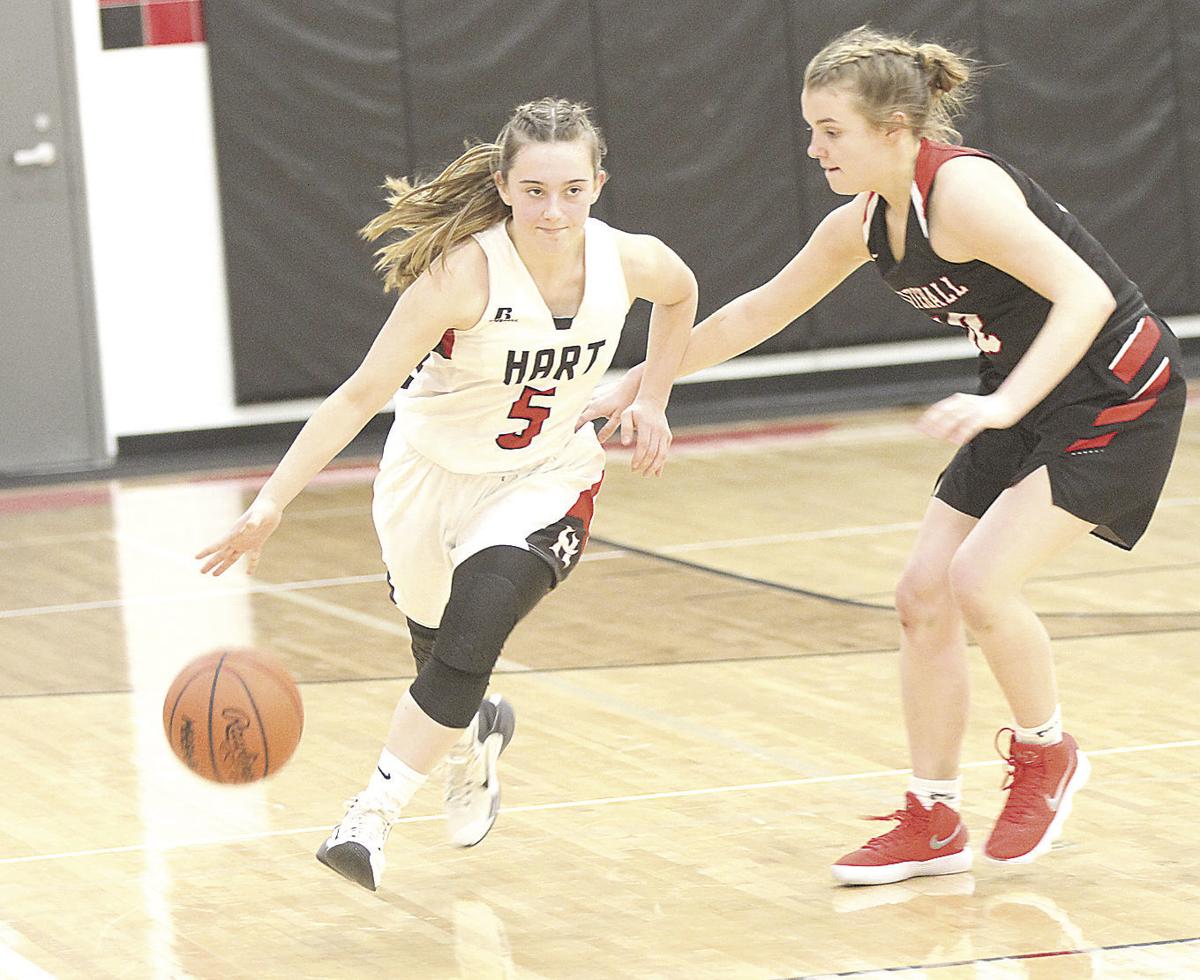 Hart’s Taylor Munoz dribbles the ball up the court against defense from Whitehall’s Camryn Evans during Tuesday’s WMC game at Hart. Munoz hit a couple of big shots for the Pirates, but Hart lost 52-43. 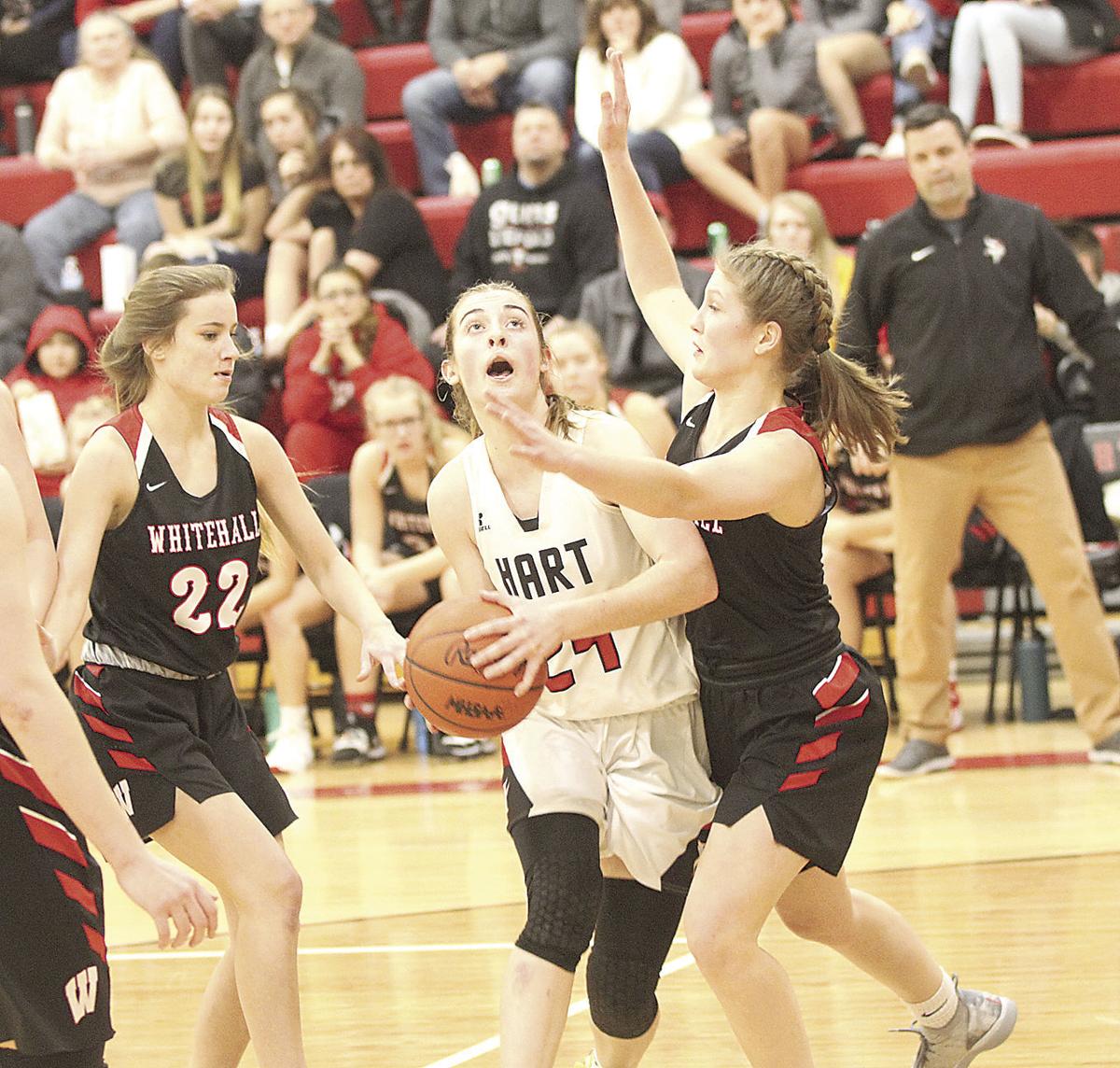 Hart’s Taylor Munoz (left) tries to wrestle the ball away from Whitehall’s Karoline Glamzi during Tuesday’s WMC game at Hart. The Pirates lost, 52-43.

Hart’s Taylor Munoz dribbles the ball up the court against defense from Whitehall’s Camryn Evans during Tuesday’s WMC game at Hart. Munoz hit a couple of big shots for the Pirates, but Hart lost 52-43.

HART — Hart’s seemingly smooth road to at least a share of the West Michigan Conference title hit a speed bump Tuesday in the form of the Whitehall Vikings.

The Pirates got off to a slow start against Whitehall and it cost them the victory in a 52-43 loss that knocked Hart into a tie with Montague in the league at 10-2. (Hart is 15-3 overall.)

Hart didn’t do a lot of scoring early in the game, which normally wouldn’t have been an issue for the Pirates with their lockdown defense. But the Vikings brought their hot hands north and hit some big early three-pointers, grabbing a 23-12 lead at halftime. Coach Travis Rosema ruefully pointed out that that first-half output matched Whitehall’s entire game total in the teams’ first meeting, an easy Hart win.

The Pirates began to surge back late in the third quarter, eating into the Whitehall lead, and when Taylor Munoz drilled a three-pointer at the quarter buzzer, Hart had the deficit down to 36-31. She hit another one early in the fourth, and Nicole Rockwell followed with yet another. When Rockwell hit a pair of free throws a moment later, the Pirates suddenly led 39-38. The senior guard led the team with 16 points.

“It was just nothing but the girls and their drive and their want to win,” Rosema said. “It was nothing I said, nothing any of the coaches said. The girls just want to win. They want to compete...It was just their will.”

With the momentum clearly in Hart’s favor, the Pirates were poised to continue their scoring run, until Whitehall turned the tide. Hart’s trapping half-court defense succeeded in pinning Karina Wade against the sideline a couple of possessions later, but Wade managed to find enough room to hit teammate Camryn Evans with a pass, and Evans drilled an open trey to put Whitehall back ahead. That sparked an 8-0 run, and the Pirates never got within one possession again.

“They made big shots when they needed to,” Rosema said of Whitehall. “That was a momentum-changer right there.”

A key factor for Hart was Whitehall’s ability to dominate the glass. Vikings’ forward Karleigh Jeffries led all scorers with 18 points, and Hart was unable to match the physicality Whitehall played with on the inside.

“Whitehall crashed the boards, and I kind of felt like they were knocking us over and it wasn’t being called,” Rosema said. “(After) one time, it’s, ok, girls, they knocked you over. Two times, you know they’re not going to call it. Three, four or five times, get stronger and start doing it on our end. It’s the same officials on both ends. We didn’t step up and play as they were calling it.”

Despite the defeat, Hart remains two wins from an outright WMC title, since its final league contest is at Montague a week from Thursday. It would be tempting to throw away Tuesday’s game, but Rosema said he hopes his team draws something from it.

“We’re not going to forget about it,” Rosema said. “We’re going to learn from it. We’ve got to come out better in the first half. We’re still there, where we want to be.”