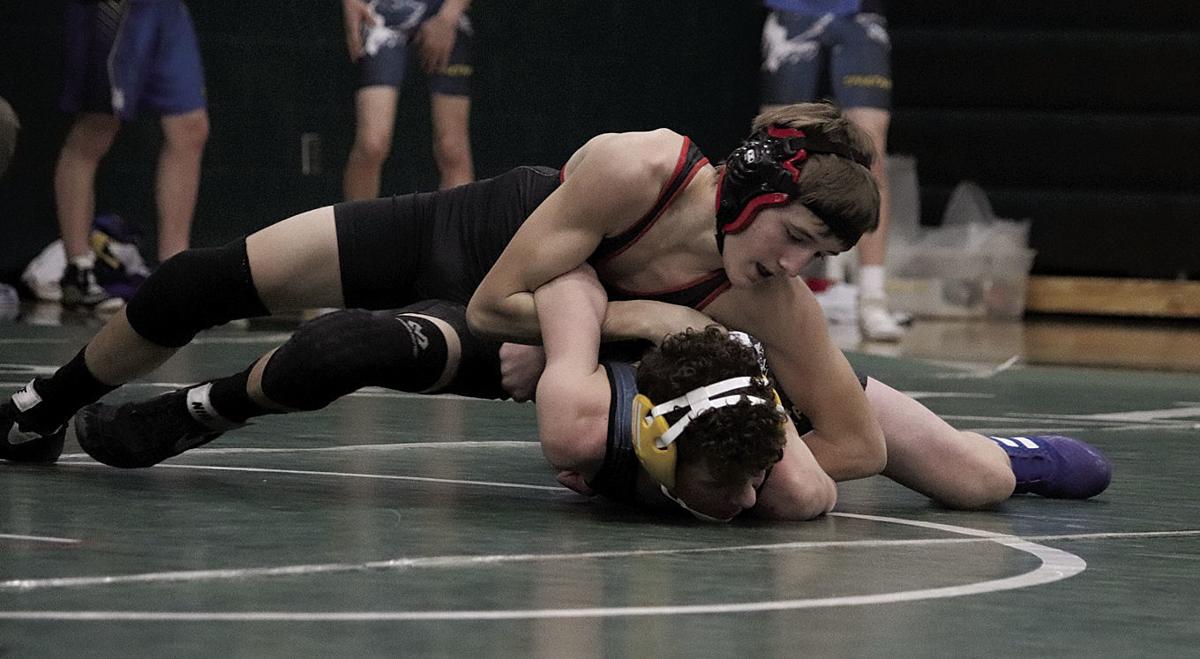 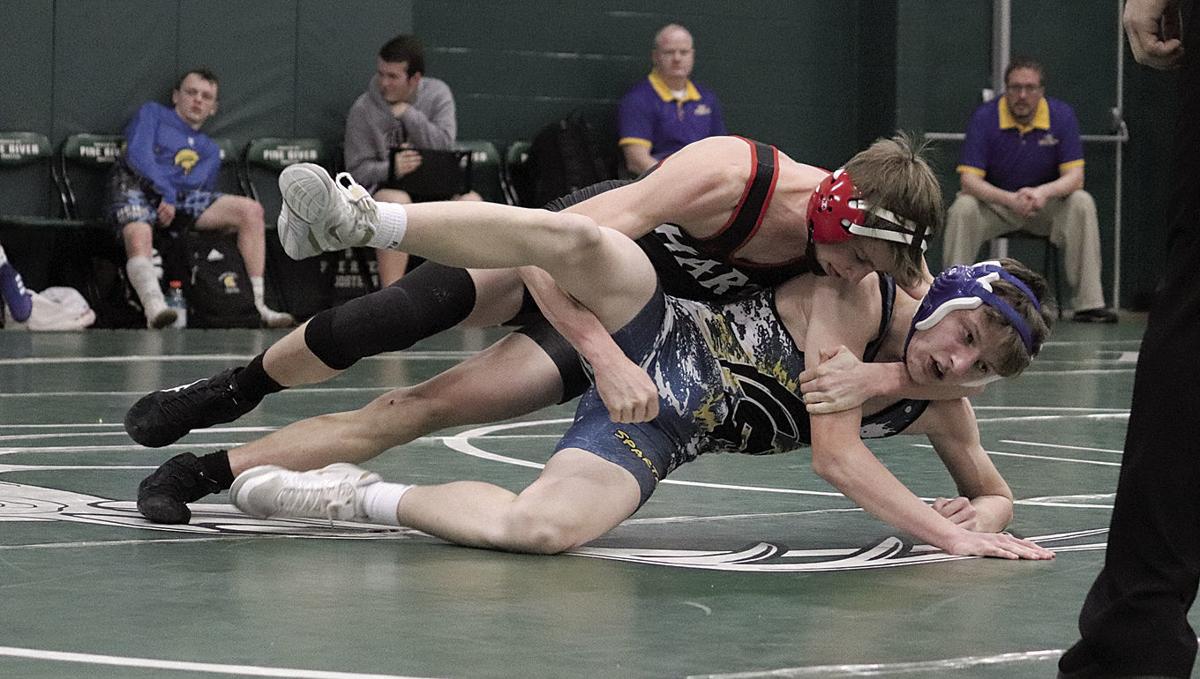 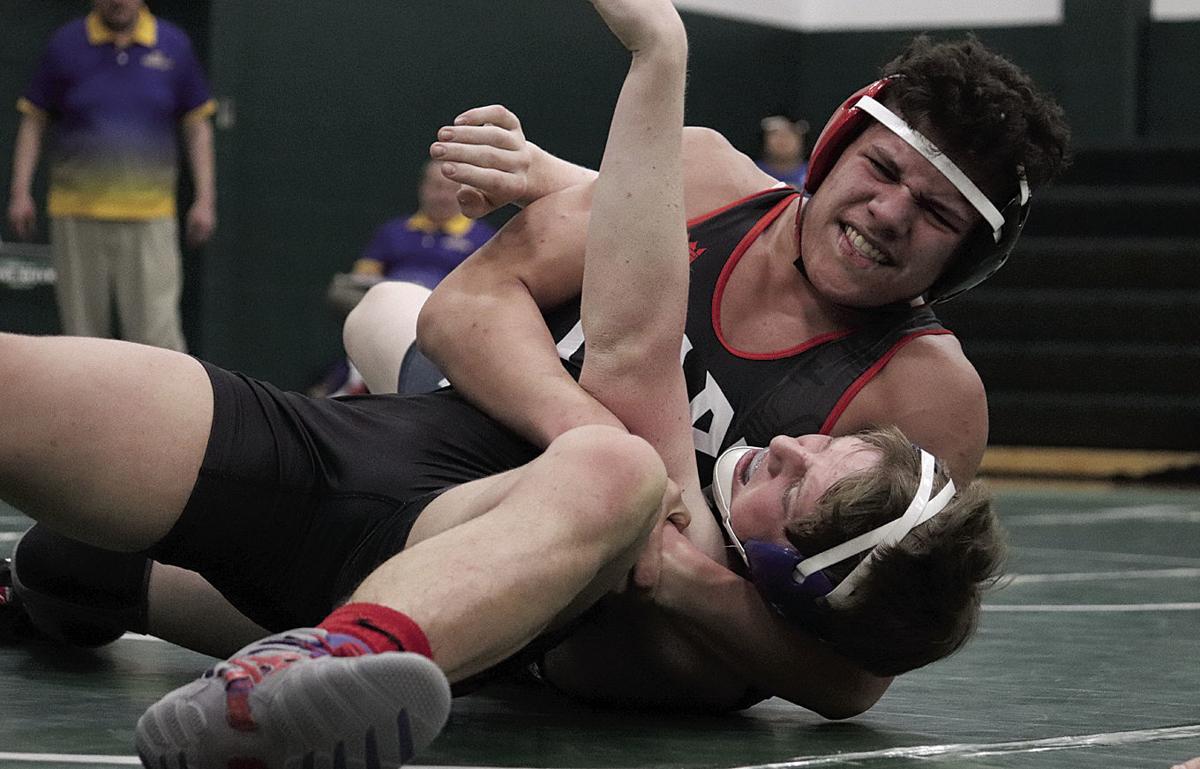 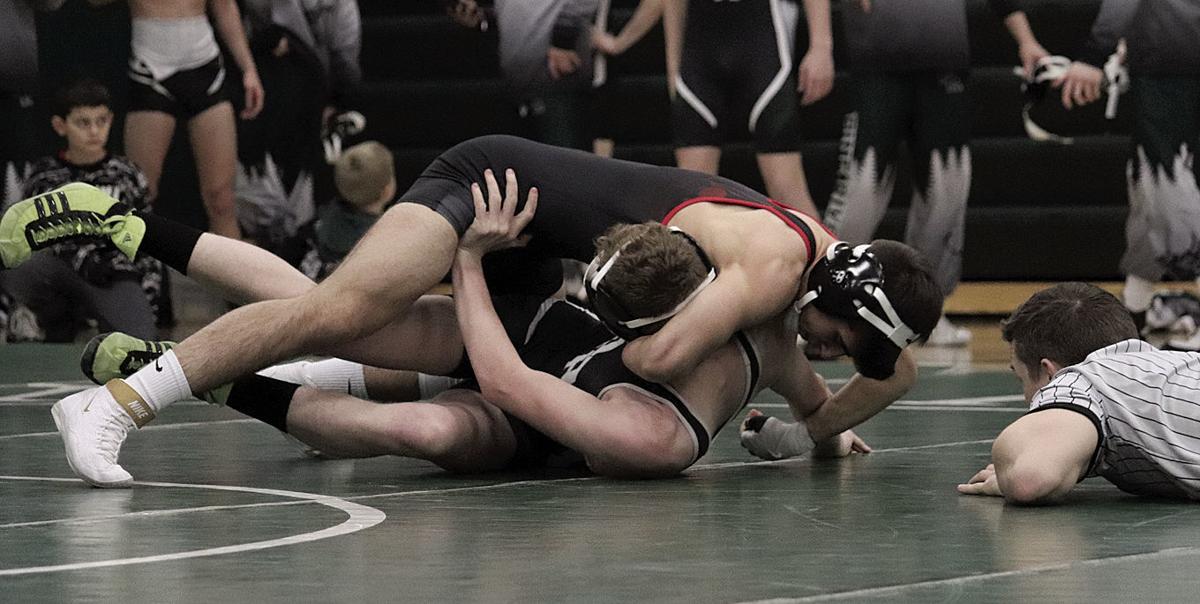 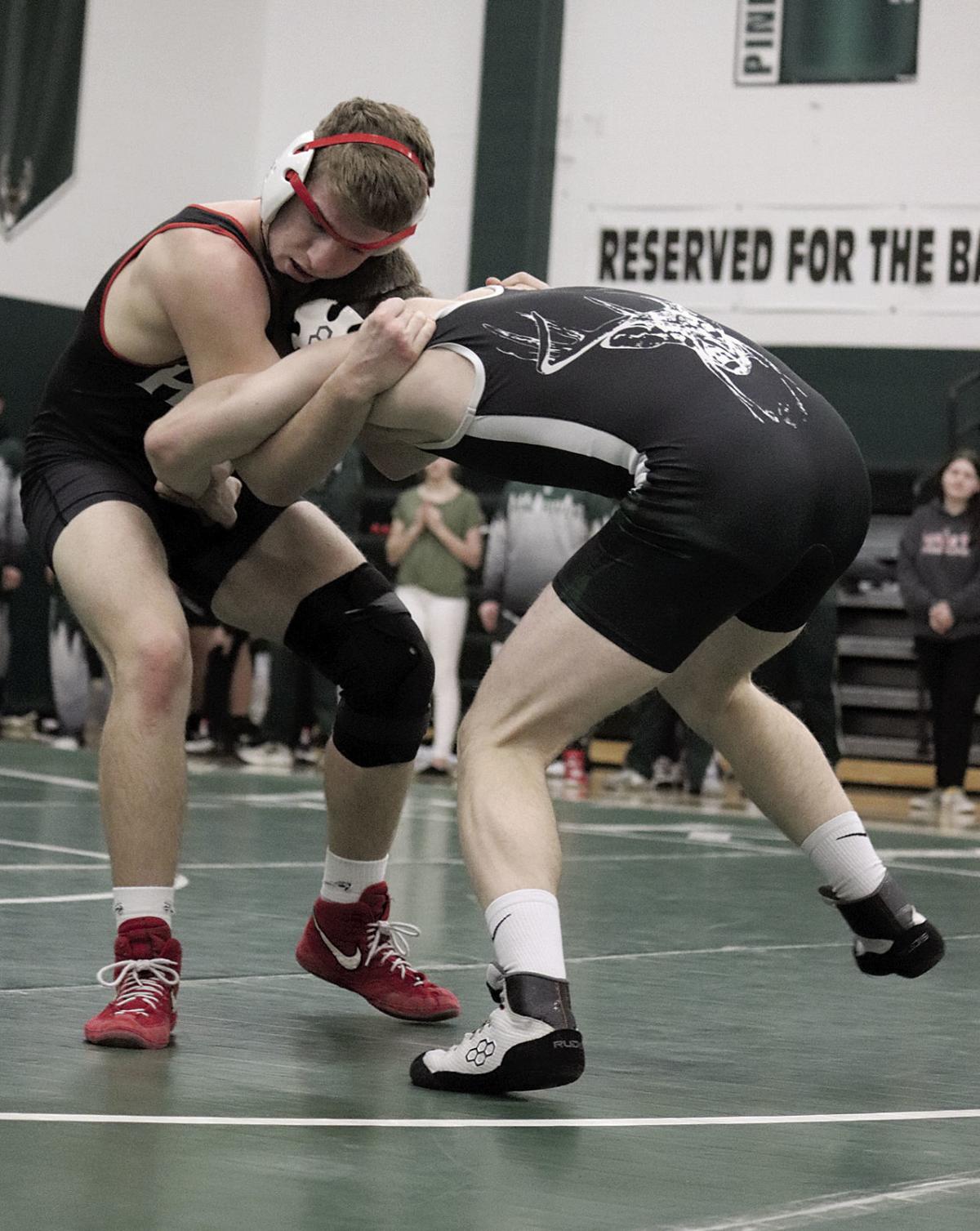 The semis provided the showcase match, pitting the #5-ranked Pirates against #7 Pine River. The match lived up to its billing.

Hart never trailed in the match after taking an early 10-0 lead on a major decision by Bryce Jorissen and a forfeit win for Trenton Swihart, but things got hairy late when Pine River scored 10 straight points to tie the match at 25 with two bouts to go.

WALKERVILLE, Feb. 12 — Walkerville opened the second half last Wednesday’s game against Bear Lake with a big scoring run, taking command of what became a 60-45 win.

The Wildcats had led by just three at halftime, but came out strong to open the third quarter.

PENTWATER, Feb. 12 — The Pentwater boys basketball team got back to their winning ways after falling to Brethren last week, topping Marion Wednesday night 57-46.

“It’s been great to play as well as we have on this home stretch,” said Falcon head coach Ashley Wojtas. “Especially the play we have been getting from our bench. Ethan (Wilkinson), Drew (Kolenda) and Blake (Bringedahl) gave us huge minutes tonight.”

The Falcons got hot early and never looked back, leading, 19-8, after the first quarter and keeping that lead throughout the contest.

While Pentwater is used to knocking down six to eight threes a night, they only converted on two of their eight three-point tries, but still played strong inside and shot 50 percent from the field to go along with 54 percent.

HESPERIA, Feb. 13 — Hesperia played one of its best first halves of the season Thursday night against Lakeview, but the Panthers couldn’t keep up that level of play and lost to the Wildcats, 62-31.

Hesperia (0-17, 0-8 Central State Activities Association Silver) played with discipline early, coach Andrew Worcester said, and the Panthers held a 3-2 lead after a low-scoring opening quarter. They were still close at halftime, down 19-13, but Lakeview pulled away in the second half.

Logan Balkema led Hesperia with 16 points, but Lucas Simon led all scorers with 19 for Lakeview.

“There was evidence of improvement despite the score, but also evidence of fatigue-induced decision making and turnovers,” Worcester said. “I hold my young team to high standards because I know their potential, so we will continue to work hard and improve.”

BEAR LAKE, Feb. 14 — The Pentwater Falcons were shorthanded on Friday night at Bear Lake in a West Michigan D League contest but were able to pull out a tough win, 49-41.

Two starters missed the game, Jack Stoneman because of an injury and Khole Hofmann because of a family vacation.

“We had a good rotation of seven players and received great contributions from players who are not used to starting,” said Pentwater head coach Ashley Wojtas. “It was a back-and-forth game throughout and we were able to break loose in the fourth quarter by hitting some clutch free throws that sealed the win.”

“We only shot 29 percent for the game,” added Wojtas. “We had the shots we wanted, they just were not falling, but the guys fought hard all night. Blake and Gannon were really solid at the free throw line at the end of the game and showed great composure.”

Jesus Santillan scored 11 points and Shane Achterhof added nine, but the Panthers were not to be denied on this night.

WHITEHALL, Feb. 18 — Hart shot well from long range Tuesday night, but it wasn’t enough for a win as host Whitehall beat the Pirates in a West Michigan Conference game, 77-54.

The Pirates (4-13, 0-12 WMC) hit 11 three-pointers, but couldn’t slow down the potent Vikings, who hit 12 of their own. The teams played mostly even after halftime, with Whitehall holding a 42-41 edge in that time, but Hart’s early offensive struggles were the difference.

SHELBY, Feb. 18 — Shelby played a solid defensive game and saw a lot to like, although it came up short to Mason County Central Tuesday night, 49-40.

“We competed for four quarters tonight,” Shelby coach Rick Zoulek said. “We took care of the ball better. We had a lot of good looks on offense and really played together defensively. (MCC’s) Jeff Carrier is the best all around player in the league and we knew where he was most of the night.”

The difference was on the boards, where the bigger Spartans grabbed 16 rebounds on the offensive glass alone while Shelby (2-13, 2-10 West Michigan Conference) totaled 20 boards.

The Panthers (7-8, 4-4 CSAA Silver) outscored the visiting Wildcats 18-7 in the opening quarter, with Emily Bayle scoring 12 of those points herself. Rachel Romero helped spark things further in the second quarter, and Hesperia built its lead to an insurmountable 53-18 margin by the end of the third.

WALKERVILLE, Feb. 13 — Behind 33 points from Mykaela Berumen and great effort on both ends of the court, Walkerville pounded Mesick Thursday night by a 67-43 score to retain the West Michigan D League lead.

“We finally played a complete game and really played with a lot of energy both on offense and defense,” Walkerville coach Marc Pascavis said. “All our players struggled mightily against Mesick at their home the last time we played (a 29-28 Wildcat win) so we knew we had to bring the energy and play mistake-free.”

“Hopefully we can keep this type of energy through till the end of the season,” Pascavis said.

The Falcons rallied from an early deficit to get within two points of the Cougars by the end of the third quarter trailing 32-30. However, the offense dried up for Pentwater in the final frame and Crossroads held a 15-4 scoring advantage in that time.

HART, Feb. 14 — Hart defeated North Muskegon Friday night, 51-38, setting up a winner-take-all battle for the West Michigan Conference when it travels to Montague next Thursday.

Hart (15-3, 10-2 WMC) started slowly on an emotional senior night. All five seniors started the game for the Pirates, and the scrappy Norse kept the game tied at nine after the first quarter.

The game remained close through three, as Hart led by seven with eight minutes to go, but Morgan Marvin hit a pair of key three-pointers to widen the lead in the fourth and the Pirates finished off the win.

The Panthers (8-8) only allowed 14 second-half points. The teams were tied at 28 at halftime before Hesperia’s strong defense made the difference.

“It was a good win against a solid team,” Hesperia coach Vince Grodus said.

The Wildcats are now 15-2 and 11-2 in WMD action. No statistics from the game had been reported at press time.

OSCODA, Feb. 15 — Hart had a terrific day at Saturday’s individual district tournament in Oscoda, advancing 11 of its 14 wrestlers on to the regionals.

Cantu improved his season record to 46-2 by picking up three victories at 135 pounds. He earned a pair of decision wins to close his day, defeating Oscoda’s Anthony Ward 7-3 in the finals.

Alvesteffer now holds a 45-3 record after earning three wins of his own at 130. Alvesteffer earned two pins to reach the finals and then fought off Pine River’s Jordan Koetje in a 2-0 overtime decision, claiming his district title.

Tate, now 36-6 on the season, only had to win twice to win the 112-pound title, scoring a pin and then defeating Mancelona’s Kyle Corcoran 8-0 in the title match. Breitwisch improved to 37-5 with three victories, scoring two pins and then edging Whittemore-Prescott’s Ronnie Boggs 2-0 in the finals.

Spencer VanderZwaag was Hart’s fourth finalist, coming in second place at 125. VanderZwaag went 3-1 on the day, earning a pin, a major decision and a decision before losing 9-0 to Oscoda’s Zach Ouillette in the district finals.

Fabian Vilches-Mendoza was Hart’s 11th placer, coming in fourth at 135. He had a 2-2 record for the day, with both wins coming by pin.

Hart’s three wrestlers that did not place each won one match before falling in the blood round. Zane Thomas (152), Nick Sawdy (119) and Bryce Jorissen (103) saw their individual seasons come to an end.

RAVENNA, Feb. 15 — Five Hesperia wrestlers advanced from Saturday’s Division 4 district meet at Ravenna to move on to the regionals.

The top Panther performer was 112-pounder Aydan Sturtevant-Roesly, who picked up a district championship with three straight wins. He earned two pins, one of them coming against his own teammate, Isaiah Gardner, before defeating Maple Valley’s Matthew Slaght by a 9-4 decision in the finals. Sturtevant-Roesly now holds a 32-7 record.

Mack Baird and Johnny Majersky each also reached the finals for the Panthers, taking second place. Baird, at 130, picked up two pin victories before dropping a hard-fought 3-1 decision to Maple Valley’s Jesse Brumm in the finals. Majersky also won a pair of pin victories before bowing to Carson City-Crystal’s Blain Mitchell in the title match.

Rounding out Hesperia’s placers at districts were two third-placers: River Roberson and Korbin Klaus. Roberson, at 130, posted a 3-1 record, with two wins by pin. Klaus went 4-1 scoring two pins, a major decision, and a decision in the third-place match.

Tyler Billings and Kamryn Rosencrans each reached the blood round for Hesperia at 215 and 145 respectively, but fell short of regional qualification.

Highlighting those three is 189-pound senior Jakob Whitlow, who picked up a district championship with three straight victories by pin in the tournament. His finals victory came over Tri-County’s Jacob Prestia.

At 285, Zachary Parker also reached the finals, coming in second place. Parker scored a pair of pin victories before falling to Orchard View’s Jordan Tuttle in the finals.

Lorenzo Rodriguez was Shelby’s third regional qualifier, coming in fourth place at 145. Rodriguez went 3-2 on the day, including wins in his first two matches. He narrowly defeated Comstock Park’s Julio Huerta, 2-1, in the blood round to secure his place at the regionals.

Miguel Guerra won a pair of matches at the districts at 112 and reached the blood round before falling short of qualification. Randall Parker and Zac Griffes each won one match for the Tigers.

SCOTTVILLE, Feb. 13 — Hart took the top spot last Wednesday at the Mason County Central Invitational, scoring 685.71 points to easily win the event by 65. Shelby took third place, with 604.7 points, with Marion in between the two schools at 620.43 points.

Full round results were not reported from the meet.

BRETHREN, Feb. 15 — Shelby claimed the championship Saturday at the Brethren Invitational, scoring 649 points to top the host Bobcats by 22.5 points.

The Tigers held a slight lead after the opening round with their score of 200.5 points, but opened it up a bit by posting 173.5 points in the second round. They were up by 10.8 points going into round three and cemented their win with an impressive score of 275 in the final round.