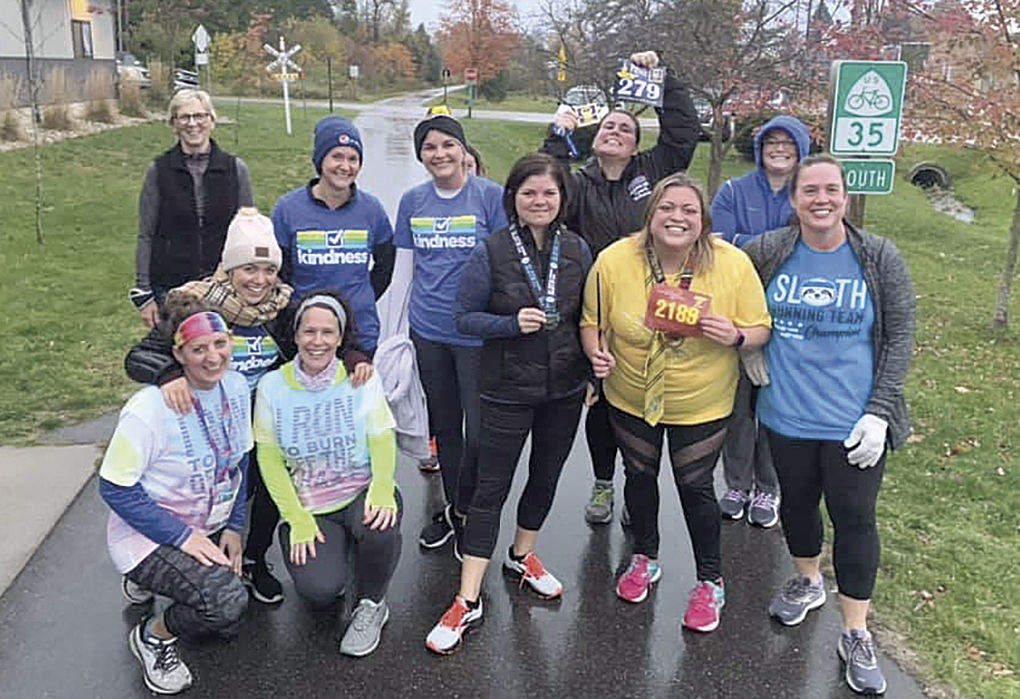 Members of the Heart and Sole running club pose for a photo after completing a run. 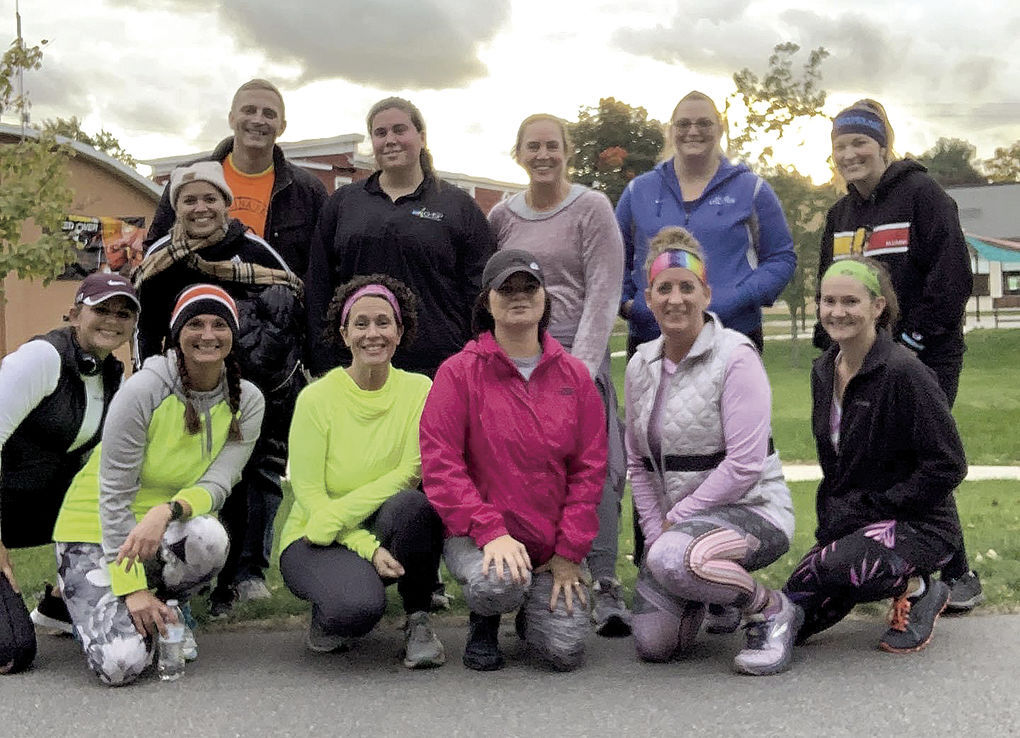 Members of the Heart and Sole running club pose for a photo on the Hart-Montague Trail. 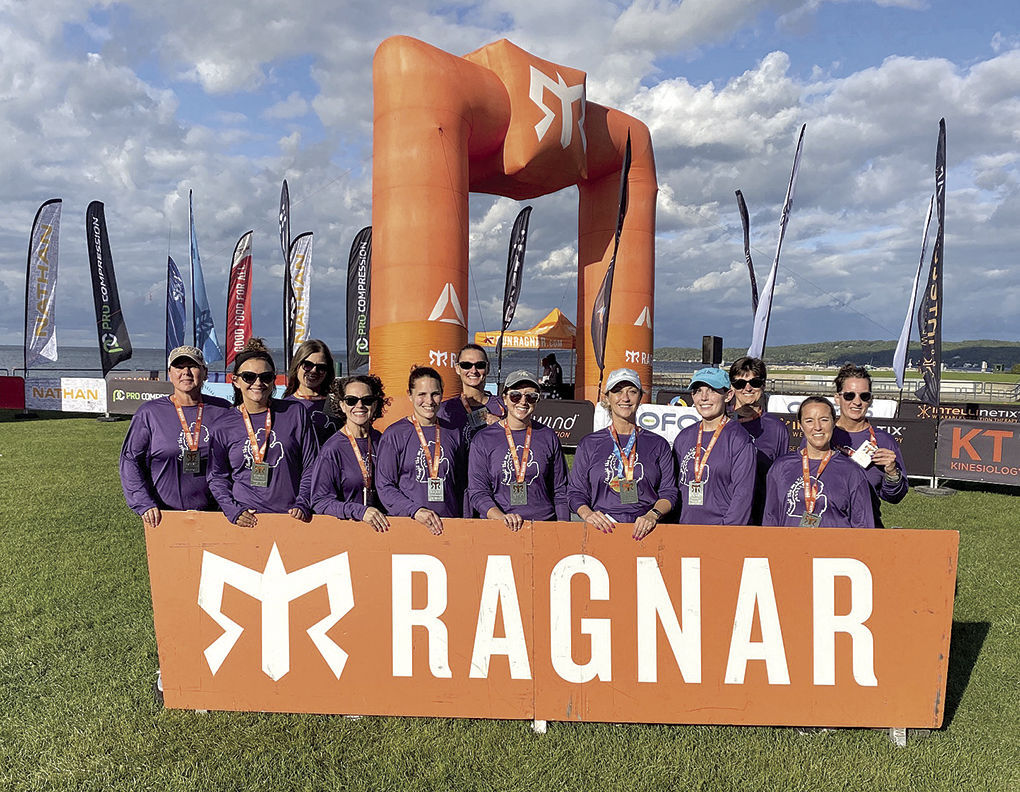 Members of the Heart and Sole running club pose for a photo after completing a Ragnar relay race that saw 12 of them team up to go from Muskegon to Traverse City.

The Heart and Sole running club and many others got together on Thanksgiving Day 2021 for a 5K that included donations to a local food bank.

Members of the Heart and Sole running club pose for a photo after completing a run.

Members of the Heart and Sole running club pose for a photo on the Hart-Montague Trail.

Members of the Heart and Sole running club pose for a photo after completing a Ragnar relay race that saw 12 of them team up to go from Muskegon to Traverse City.

The Heart and Sole running club and many others got together on Thanksgiving Day 2021 for a 5K that included donations to a local food bank.

When Jessica Parmalee started the Heart and Sole Run Club in 2019, she was “just looking for a way to get out of the house” and stay active amid the circus of raising four kids, the youngest of whom are three-year-old twins. Like many, she enjoyed runs on the Hart-Montague Trail, but thought if she could get a small group together it would be a safer proposition than running alone.

Little did she know she had started something that would draw interest from dozens of people all over the county.

“When I first thought about it, it was going to be me and I pictured two other people out there once in a while running together,” Parmalee said. “It just kind of grew and people are coming from (places like) Montague, Whitehall, Hart. That shows me there’s a need for it.”

Now, there are over 40 people that are in the private Facebook group for the club, and far more that participate in tangential events surrounding it, like a free 5K run the group organized this Thanksgiving to raise donations for a local food bank that brought in about 100 people. The club also sponsored this year’s Snowman Scramble 5K in Pentwater and donated books to every student in two different classes during a National Reading Month drive in March.

Twelve members of the club even participated in a Ragnar Relay this year that saw the group team up to complete a relay run from Muskegon all the way to Traverse City. It was “something none of us have ever done or ever imagined we could do,” Parmalee said.

The club started before the COVID-19 pandemic hit in early 2020, but its onset and the unusual summer that followed led to the club’s growth as more people, anxious to get outside, found an outlet.

The club organizes runs twice a week that start in New Era, where Parmalee lives, and head north on the Hart-Montague Trail. The group has marked the trail for a 5K distance, though members may run shorter distances if they choose by turning around where the trail meets M-20. Even those otherwise uneventful runs have led to a spirit of camaraderie within the group that Parmalee didn’t anticipate.

“The cool thing is whether it takes you 25 minutes or an hour, I expected people to finish and then leave,” Parmalee said. “But other people have stayed there and cheered other people coming across (the finish line). Every ability, every age, every size out there, we want everyone to feel welcome and comfortable.”

Shelby cheer coach Sarah Schaner, who became aware of the club early on after having taken a class Parmalee taught at EnerG Fitness, can attest to that. She has lost over 100 pounds with a fitness regimen that, among other things, included the run club, and the encouragement she received was a vital part of her success doing so.

“When I first started, I couldn’t even run a mile,” Schaner said. “As a plus-size person back then, I was terrified to jog in front of people because I didn’t want to get made fun of. Jessica created a club that was inclusive and open to everyone, including beginners. It sounds ridiculous, but she made it a safe space and no-judgment zone. Since we did the original run club and now in the 2021 run club, now I can confidently run five miles, which is insane for me.”

The club isn’t solely about running; Parmalee has live-streamed video workouts for the group, and Schaner said there have been group outdoor activities such as hiking as well.

In addition, Parmalee publicly posted a “2,021 in 2021” challenge on Facebook at the start of this year, encouraging anyone who wanted to join her in an effort to form teams and cumulatively complete 2,021 miles worth of exercise over the course of the year. Bicycling, walking, rollerblading or even workouts on an elliptical or treadmill could be included in the mileage, in addition to running.

Once again, interest exceeded Parmalee’s expectations. She said over 250 people participated, including many from out of town. A Facebook group formed for encouragement and accountability within the participants as they pursued their goal. After the 2021 success, she’s repeating the challenge for 2022 with the extra mile added. She hopes to have some local friends who participated in that challenge join the run club as well.

The run club is also more than happy to literally pick members up off the trail, and in fact has done so.

“Even when we’re out on the rail trail, we’ll have people stop us and ask what we’re doing out there,” Parmalee said. “We’ve had people join that way. I guess I never realized the need or the want for something like this out here.”

There’s also the possibility of spin-off groups forming. Parmalee said some club members from outside New Era have approached her for tips on starting clubs of their own to minimize travel.

The club, which is naturally on a winter hiatus right now but plans to return to its regular meet-ups when weather permits, has evolved from merely a way to stay active (and safe while doing it) to a friend group in its own right. Schaner said her husband joins her on runs, and the experience makes for a great way for couples to bond, parents to briefly get away from the kids if possible, and friends to support one another.

“Give yourself 30 minutes of time, of activity, being outside and away from your phone or work or extra activities you have going on,” Schaner said. It’s been a huge motivator for my weight loss program.

“It was a positive addition to our community, and not just for safety, but for overall health and wellness. In such a dreary time this past year, it’s given us all something to look forward to.”