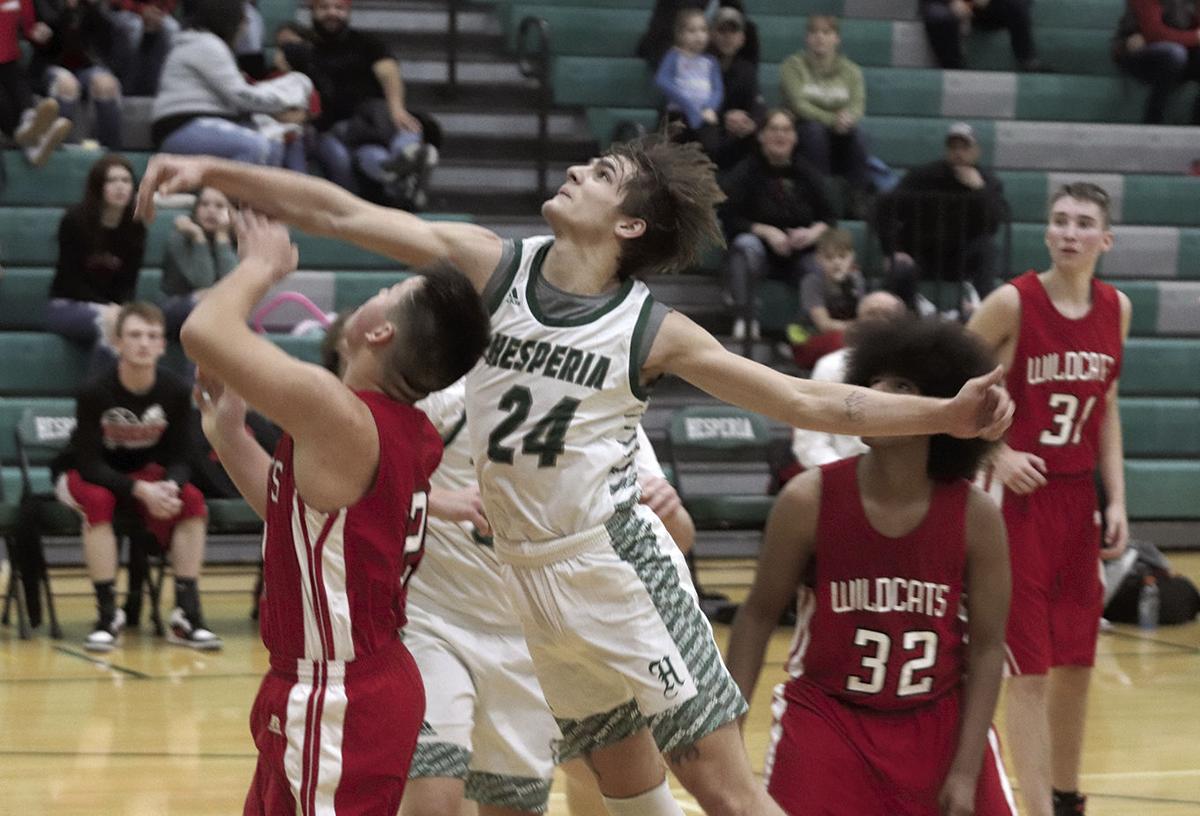 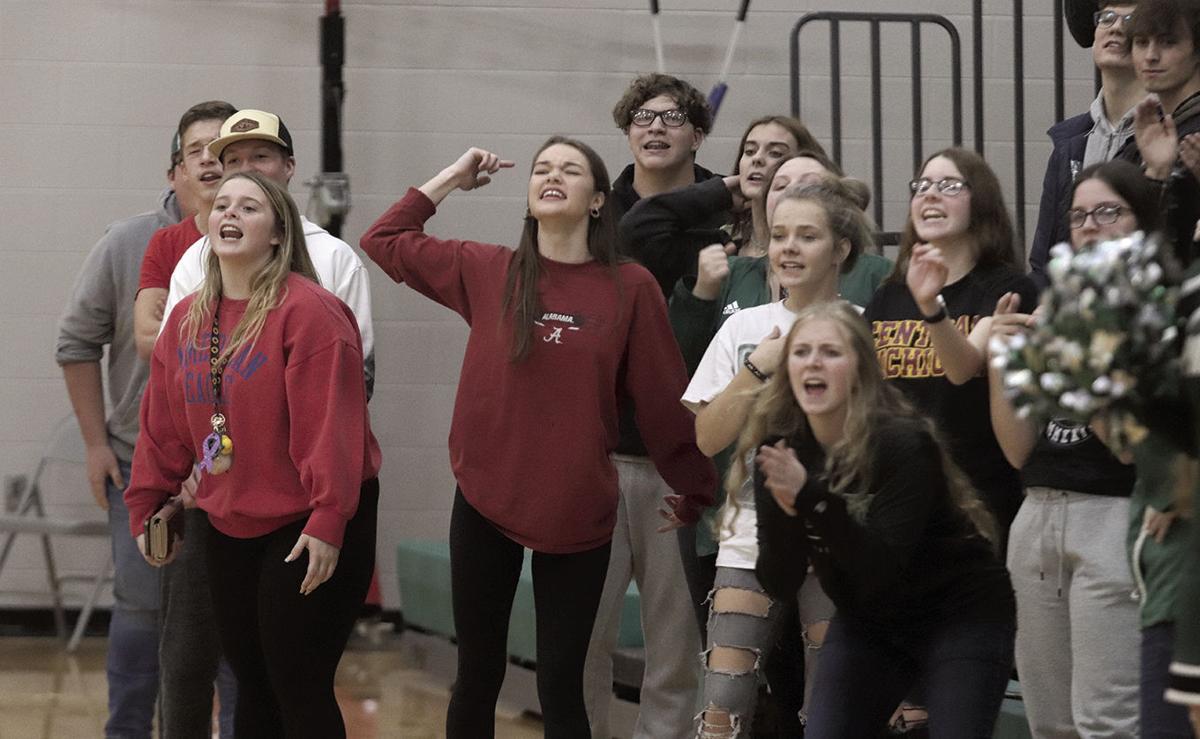 The Hesperia student section chants during a Walkerville free throw attempt Dec. 7 in a game at Hesperia. The MHSAA is bringing back its Battle of the Fans contest this year after not holding it in 2020-21 due to the pandemic. 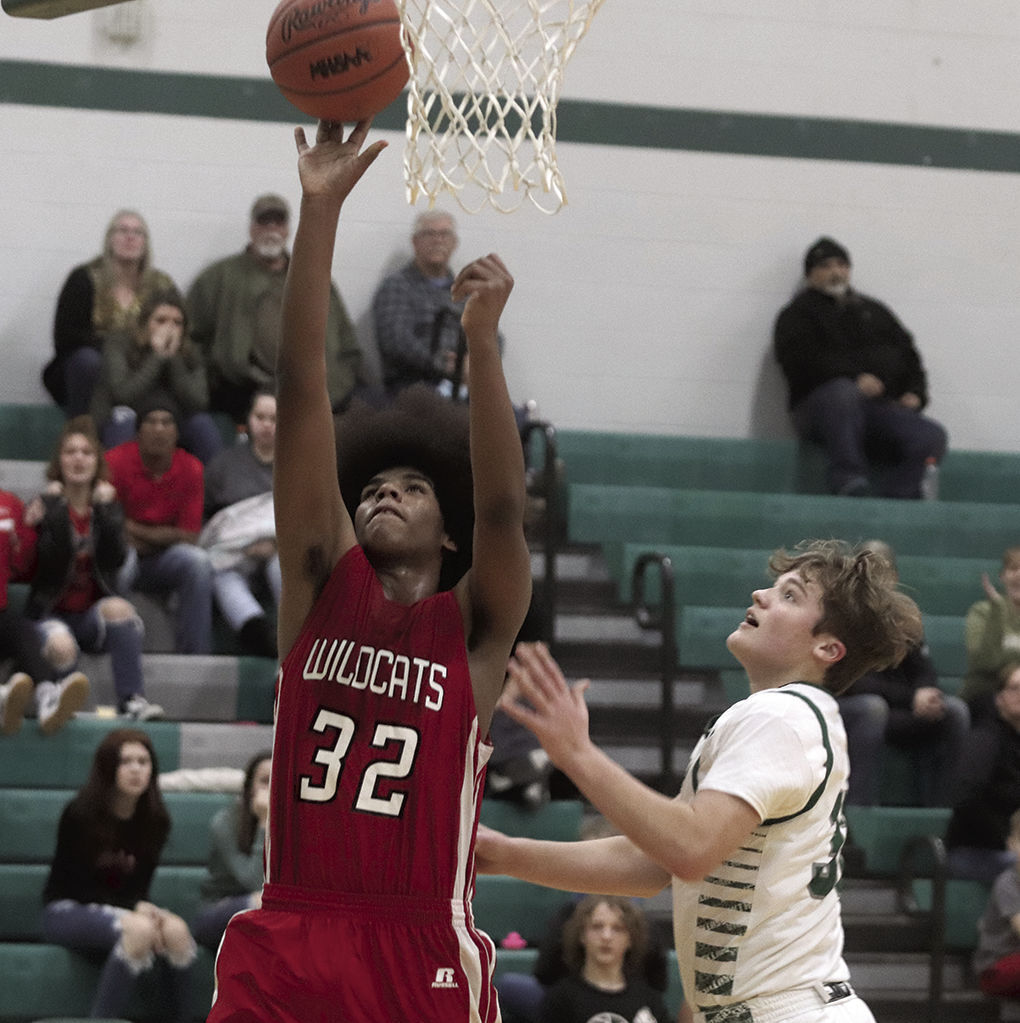 Walkerville’s Zeontae De La Paz drives in for a layup while Jared Tanner looks on for Hesperia during Tuesday’s game at Hesperia. The Panthers won, 51-47. 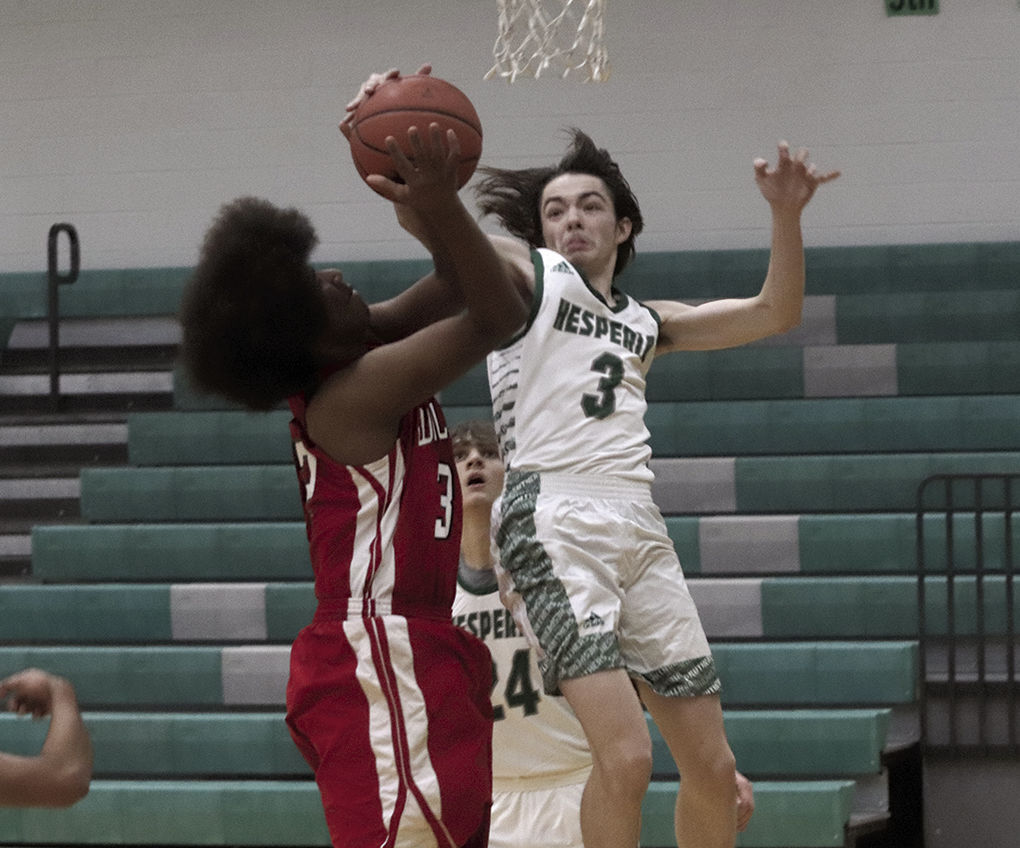 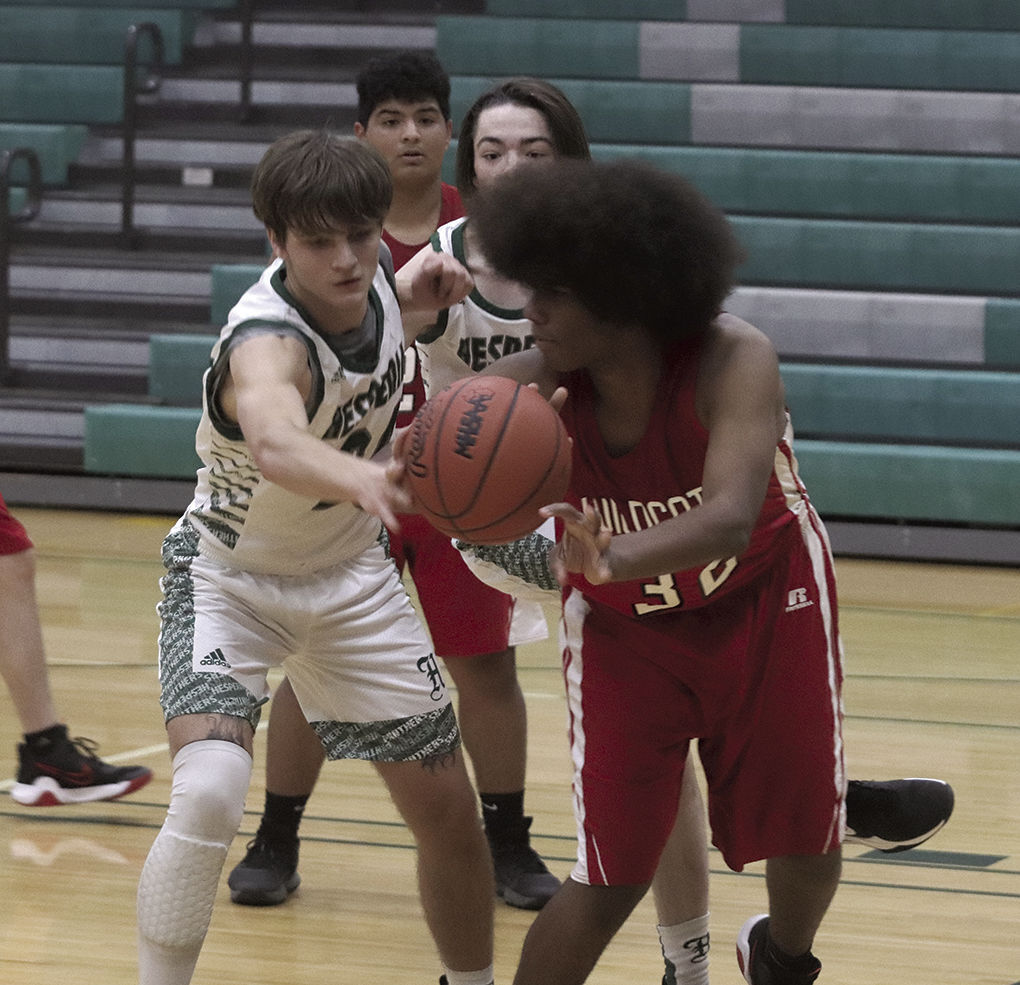 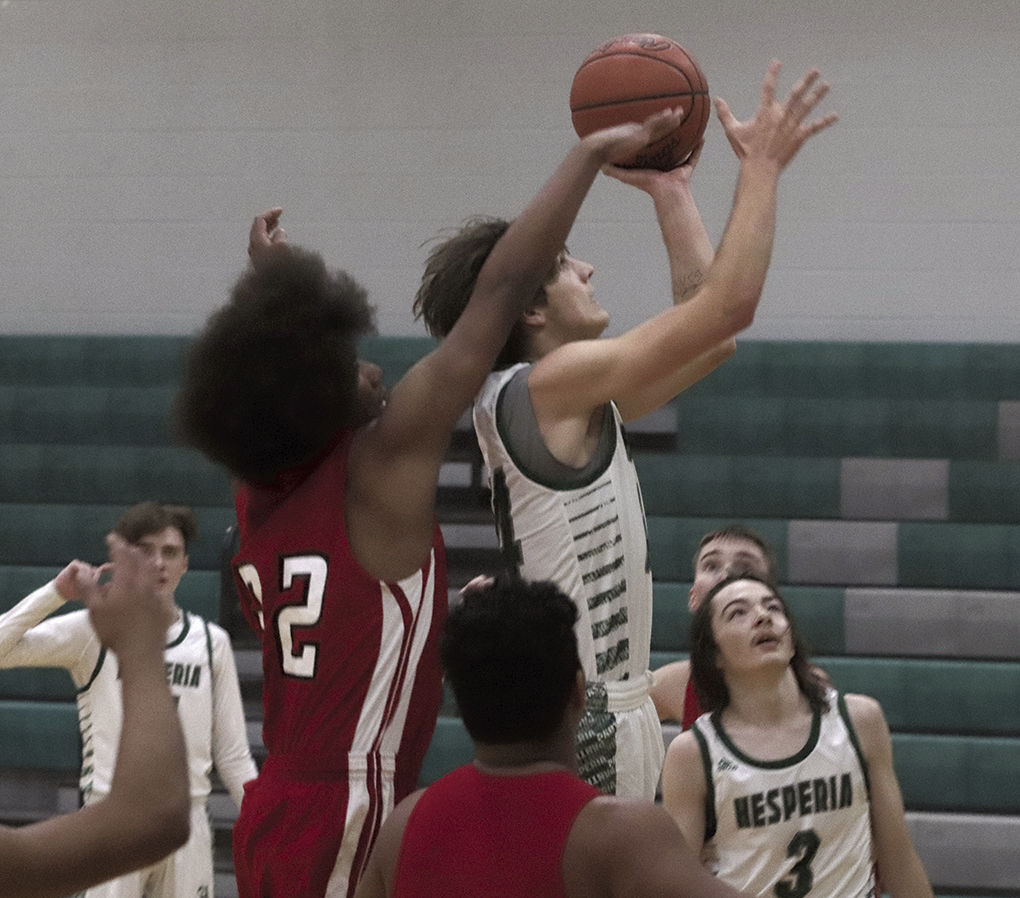 Hesperia's Maverick McKinnon (with ball) drives the lane for a shot while Walkerville's Zeontae De La Paz defends during Tuesday's game at Hesperia. McKinnon had 25 points in Hesperia's 51-47 win.

The Hesperia student section chants during a Walkerville free throw attempt Dec. 7 in a game at Hesperia. The MHSAA is bringing back its Battle of the Fans contest this year after not holding it in 2020-21 due to the pandemic.

Walkerville’s Zeontae De La Paz drives in for a layup while Jared Tanner looks on for Hesperia during Tuesday’s game at Hesperia. The Panthers won, 51-47.

Hesperia's Maverick McKinnon (with ball) drives the lane for a shot while Walkerville's Zeontae De La Paz defends during Tuesday's game at Hesperia. McKinnon had 25 points in Hesperia's 51-47 win.

HESPERIA — Ending lengthy losing streaks is never easy, and Hesperia had a doozy of a time putting a stop to its own skid Tuesday night, but in the end the Panthers were able to do it, hanging on to beat Walkerville 51-47.

The win was Hesperia’s first since a 2019 district semifinal game against White Cloud, ending a 35-game losing streak. It was the Panthers’ first regular-season win since edging Shelby in March 2018.

It looked like Hesperia might cruise when a Maddox Mosley three-pointer gave the Panthers a 43-29 edge early in the fourth quarter, but things quickly turned the Wildcats’ way after that as the visitors scored 11 straight points. Maverick McKinnon ended the run with a driving layup, but the Wildcats didn’t let up.

The pressure to get the victory seemed to get to the Panthers in the final minute when they scored on their own basket on an inbounds play, then committed a five-second violation because they didn’t realize it had happened in time and didn’t inbound the ball. At that point, it was 47-44 Panthers and Hesperia coach Andrew Worcester called timeout to refocus his players.

“The guys wanted to win so bad, it was kind of blinding them,” Worcester said. “They had to redirect their focus, and our coaching staff decided right then, let’s get this timeout and get them in here, tell them to just calm down and understand we only had, what, 41 seconds left, and to not give this away.”

Worcester also turned to McKinnon, who scored 25 points in the game, and delivered a simple message: Take over.

McKinnon listened, scoring quickly on the next possession, then doing it again for the team’s final points. His team was able to hang on from there.

“I could tell they weren’t playing (that well), and I took it for them,” McKinnon said. “I told them I had them, that I had their back.”

McKinnon played with boundless emotion down the stretch, which he said was at least in part due to some hard contact he had taken during the game. It’s a quality he’ll have to learn to harness — he was called for an intentional foul late in the game despite his team being ahead — but the determination not to let the Panthers lose was needed on this night.

“Sometimes we get into loose cannon mode, but it’s the coaches’ responsibility to make sure they get reeled in and understand what the game plan is and stick to it,” Worcester said.

For Walkerville’s part, impatience on offense was a big factor in defeat. Coach Lee Oomen said his team attempted far too many three-pointers, “40-plus” by his estimation. Point guard Collin Chase launched close to half of them but was unable to connect. All around, the team attempted too many shots without making an effort to create an offensive rhythm.

When things started turning in favor of Walkerville later in the game, Jesus Santillan was a big reason. Santillan is the team’s most experienced player, and for the most part he looked it. He scored 15 points, and Oomen’s only complaint was he should’ve shot more.

“Jesus had a good game,” Oomen said. “He hesitated a few times, on four or five threes, and I don’t know why. He was in a good rhythm. He had it going tonight.”

Zeontae De La Paz led the Wildcats with 16 points and played with great energy throughout the game, no small feat when the team only had six players take the court, and even the lone substitute played only in the third quarter.

It was a day to celebrate for the home team and the home crowd, though, and certainly the two fed off each other. The Panthers’ student section and cheerleaders were into each moment of the game in hopes their losing streak would end, and indeed it did.

Now the challenge for Hesperia will be to build on the result and collect a few more victories.

“I think we did a pretty good job until the second half of maintaining our perimeter defense, and it kind of got out of hand in the second half, and then we had to reel them all in and focus,” Worcester said. “Once that fiasco was over, I think they got their heads back in the game.

“I’m extremely proud of this team. We’ve got this team for two years and I’m thinking this is a great way to start off.”