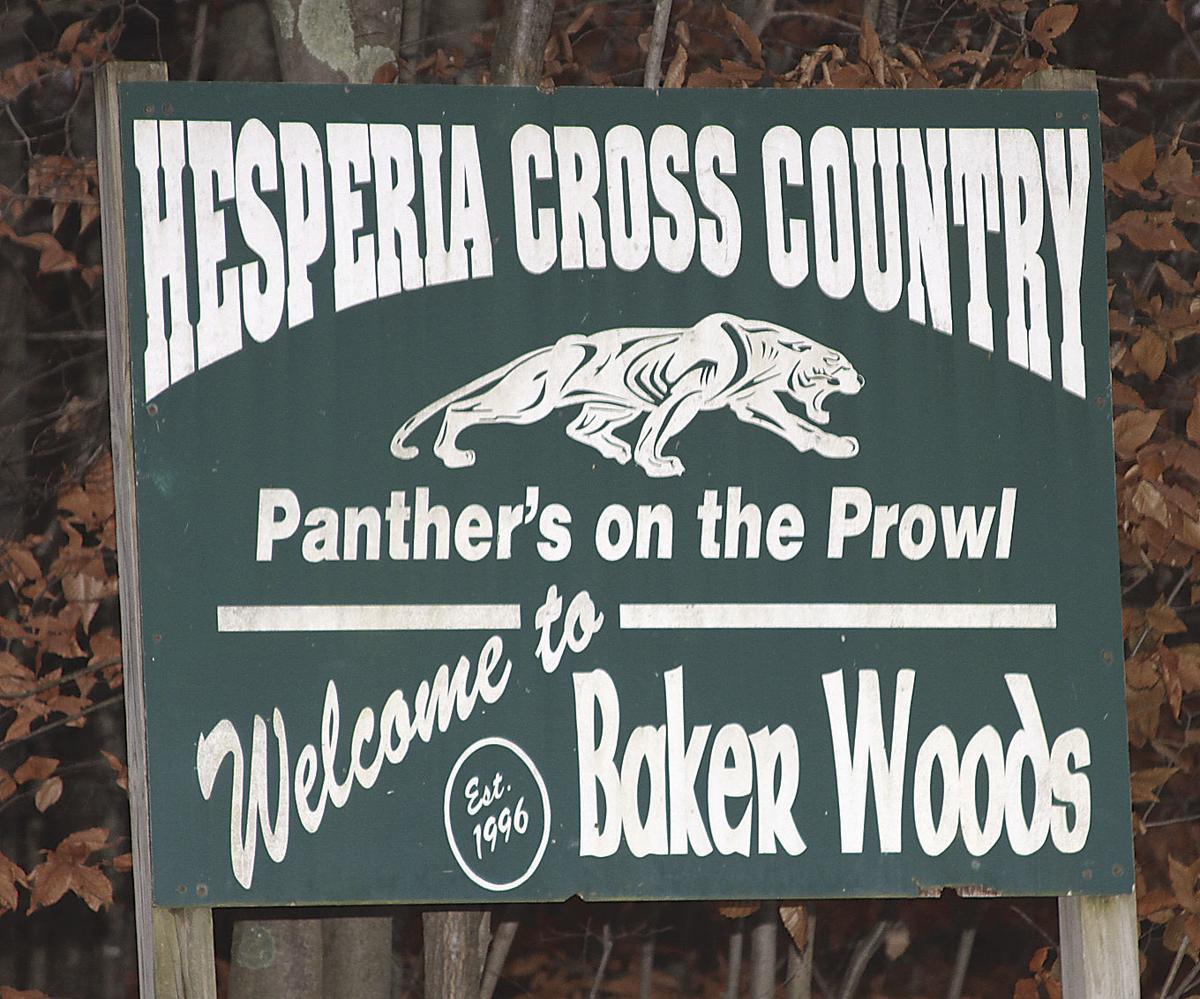 The entrance to Hesperia’s Baker Woods cross-country course. When coach Doug Baird, recently inducted into the state coaches’ Hall of Fame, first became head cross-country coach, the team did not have a home course. 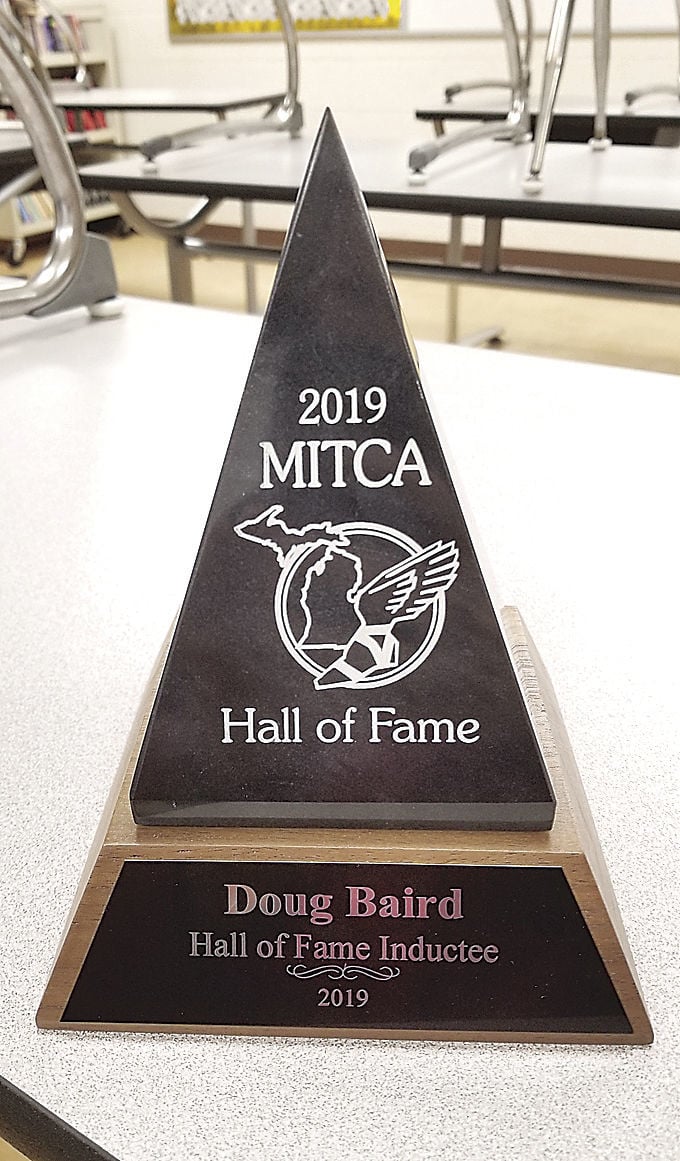 The MITCA Hall of Fame trophy given to Hesperia coach Doug Baird at his enshrinement ceremony Nov. 8.

The entrance to Hesperia’s Baker Woods cross-country course. When coach Doug Baird, recently inducted into the state coaches’ Hall of Fame, first became head cross-country coach, the team did not have a home course.

The MITCA Hall of Fame trophy given to Hesperia coach Doug Baird at his enshrinement ceremony Nov. 8.

HESPERIA — When Doug Baird was first handed the reins of Hesperia’s cross-country program in the mid-1990s, there wasn’t one.

There was no Baker Woods home course, no team; at the time, for most athletic types, it was football or bust in the fall. There wasn’t even a track; every spring meet was on the road.

Some 25 years later, things are a lot different. The Panthers have what Baird considers “one of the diamonds in Michigan cross-country”, the Baker Woods course. They have four state championships between the boys and girls teams. And now they have a Hall of Fame coach.

Getting inducted into the MITCA Hall of Fame is difficult even by the standards of such things; to be eligible, a coach must lead a team for at least 20 years and accumulate at least 60 points on a scale that rewards for championships. Baird, with four state titles, 15 different top-10 finishes, 24 conference titles and seven regional titles, blew well past that qualification.

“I want to make sure everyone realizes how thankful I am,” Baird said. “There’s so many people that have made contributions to our program. So many moms and dads have come to the course and helped to do this to put a new turn in or put some fencing in. Every contribution that we’ve gotten over the years has meant something to the kids and the program. All the successes we’ve had are well-earned. I’m just really thankful.

“I want to thank every kid that ever ran for me. Without them, I obviously wouldn’t have been recognized as one of these guys. It was very humbling to stand in front of 300-400 people at the banquet and accept that in front of my family and my parents.”

Baird emphasized the help he’s gotten from a handful of other coaches through the years, including Pat Broton, Scott Wenberg, Louise Troughton, Mark Arbogast and, most recently, Michelle Martin.

This wasn’t Baird’s first Hall of Fame induction, although it was his first formal one. The Panthers have their own version of a Hall of Fame on their Baker Woods course, where over the years Baird has named portions of the course after anyone who earns all-state status for the Panthers. A few years after the course debuted in 1996, Baird was surprised to find that the program had decided to dedicate the course to him.

“That was pretty cool,” Baird said with a smile. “I’d never had anything like that. Even though it was just a little piece of woods out in the middle of nowhere, it really meant something. Our contributions to the school meant a lot to me and our program.”

Hesperia won its first state title in 2004, on the boys’ side, in dramatic fashion. Having lost to Bear Lake, Baird said, five times over the course of the season, the Panthers remarkably managed to outduel the Lakers by just a point in the biggest meet of the year, 124-125. Baird said he remembered placing the trophy on his mantelpiece the next morning and wondering that age-old question: Now what?

“I really had to kind of decide what I was in it for, and the common answer is just the kids,” Baird said. “Obviously I could walk out right now and feel great about everything we ever achieved here at Hesperia and Mount Pleasant and all this. But I still go back to the kids that are coming through the program (now), they need just as much help and mentoring and all of that. When it really comes down to it, just building those lifelong friendships and relationships with the kids and their parents.”

Baird has done his best to maintain that focus through three more state titles, one by the boys in 2006 and back-to-back titles by the girls in 2010 and ‘11. The school’s on-course performance hasn’t been at that level since those titles were won, but still the coach expresses pride in what his teams have done.

“The idea isn’t to chase a conference title or state title,” Baird said. “The idea is to get the best out of the kids. If they’re giving you their best, and they’re fourth, third or second in the conference, that’s ok if they’ve given you their heart and soul. Because in the end, it’s supposed to be educational athletics, and that’s what I keep going back to. What I hope is that these things, these achievements we’ve come by, that the current kids coming through school, and today’s young people have their own challenges, I hope they can see those things and see that it’s achievable.

Hart boys fall down early in loss to Montague

“The kids we had this year were hardworking, and they represented our tradition well. I was just as proud of those kids as I was of any team that won state titles.”

One big factor Baird believes has led to Hesperia’s success on the course is the consistency in leadership. It’s not common for one coach to lead a team as long as Baird and his small group of assistants has led this one, even less common at a smaller school.

“I’ve remarkably only had about four or five people that have been with me for the long haul,” Baird said. “Usually there’s lots of turnover in our high school programs, and I think that consistency has really helped with those guys.”

Of course, the common thread in all these teams, besides Baird, has been hard work. The coach said the team has a motto of “soak our shirts every day in practice”.

“A lot of people ask, how did that all happen? A couple different things come to my mind,” Baird said. “We had a few groups of kids come through that were just enormously talented, and we capitalized on some moments that were memorable for our whole lives. I got really lucky. We had some great hardworking kids here...We just got really fortunate that through a lot of those years, we had a lot of really dedicated kids.”

Baird said he doesn’t know how long he’ll continue to coach — the younger of his two sons, Mack Baird, is a junior this year, and Connor graduated last spring — but smiled that he’d like to be “somebody’s good assistant” one day. No matter how long he lasts in his post, Baird hopes that what lasts are the relationships the teams have built with him and with each other.

“You hope everything will go positive,” Baird said. “It doesn’t always, but you sure hope a lot of things can go right, and a lot of things have went right for our cross-country program. When all that goes on, you’ve really got to make sure you’re not chasing trophies, that you’re chasing stuff that’s more meaningful. If all the trophies burned down in a house fire or get taken off the mantel here, whatever...you really are doing it for the relationships.”

Overcast. A few flurries or snow showers possible. Low around 30F. Winds NNW at 5 to 10 mph.

Overcast. A few flurries or snow showers possible. Low around 30F. Winds NNW at 5 to 10 mph.