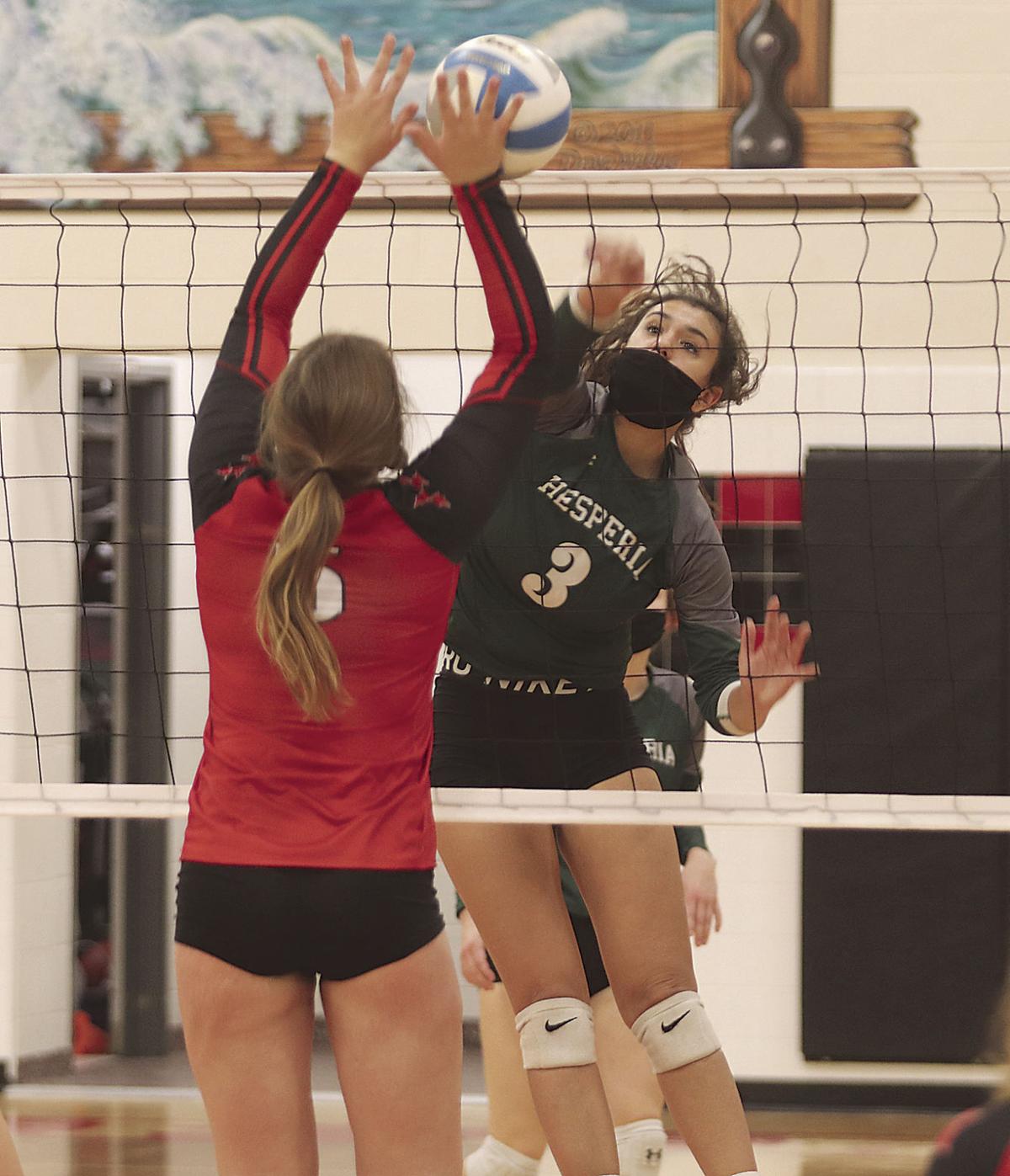 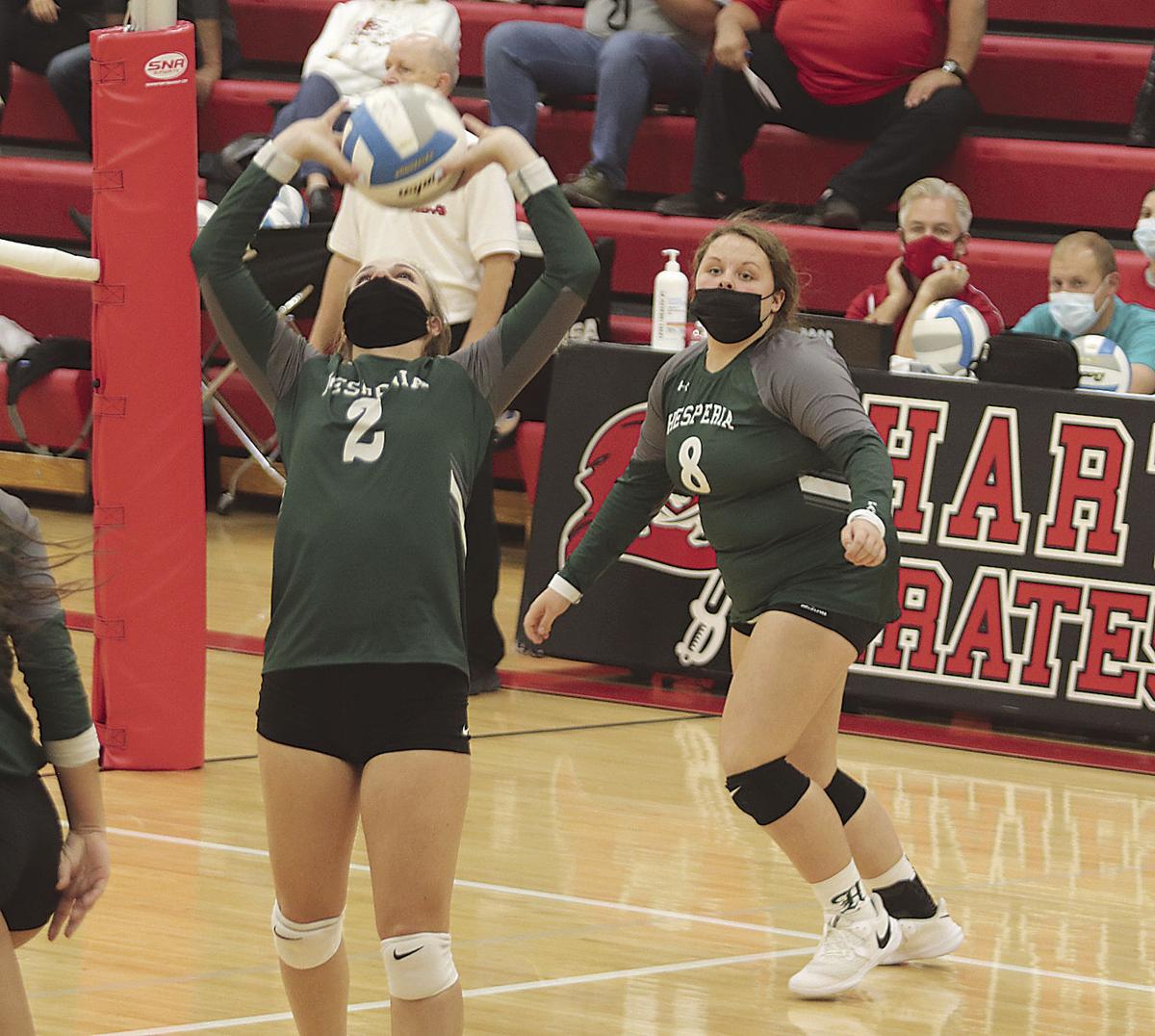 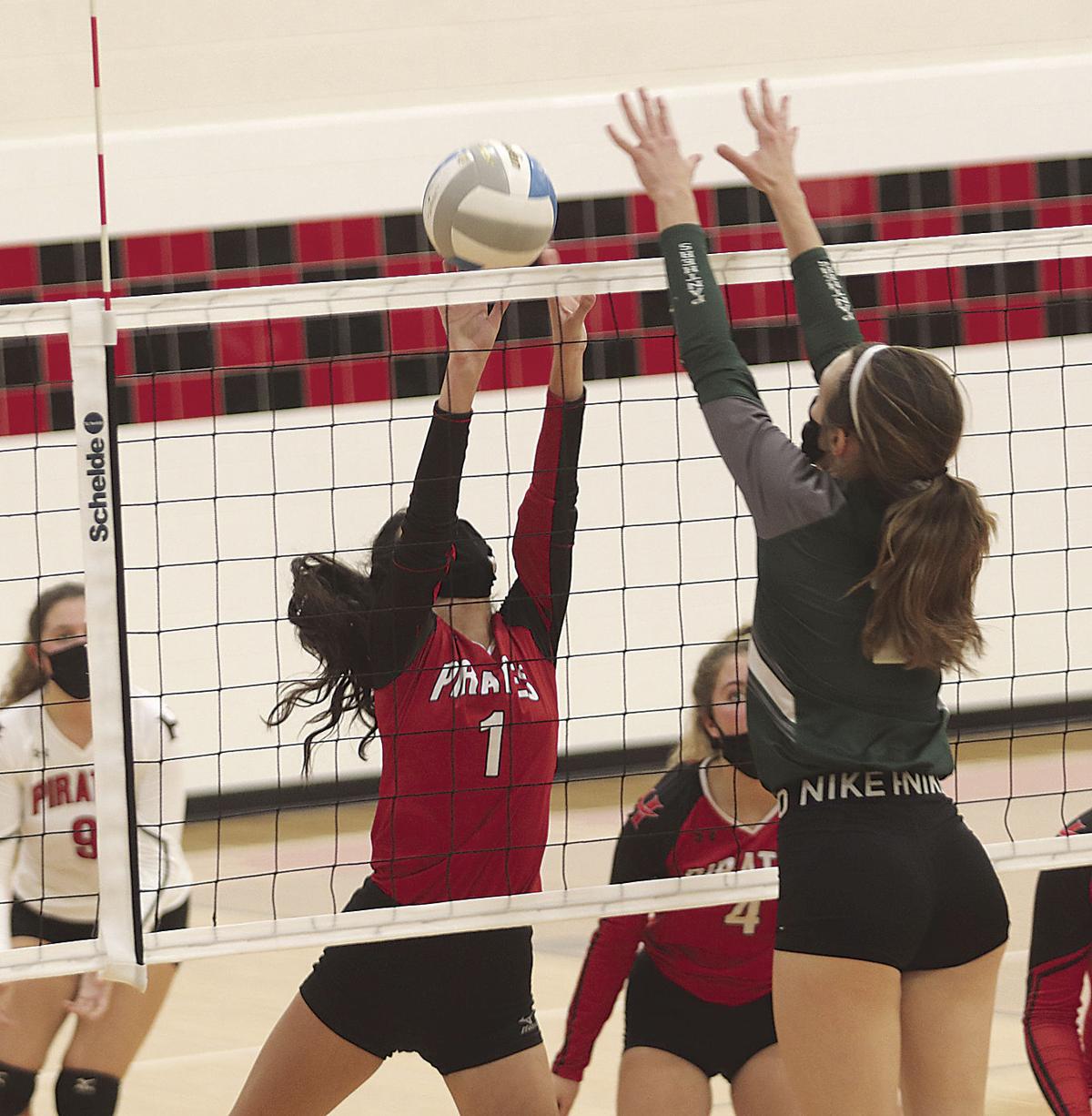 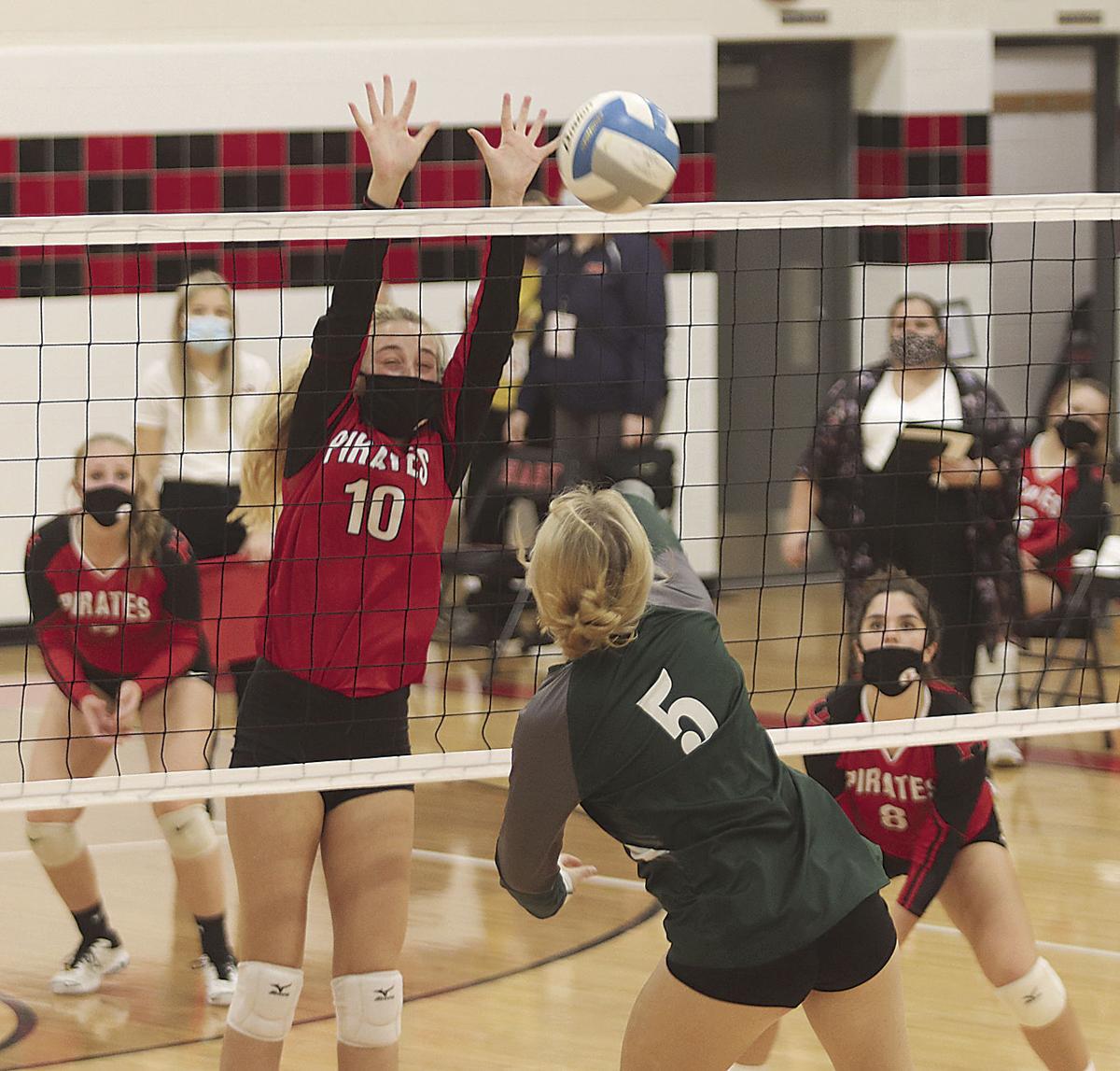 Hesperia's Rylee Gleason (5) sends the ball over the net during Wednesday's district semifinal match against Hart. The Panthers won, 3-0. 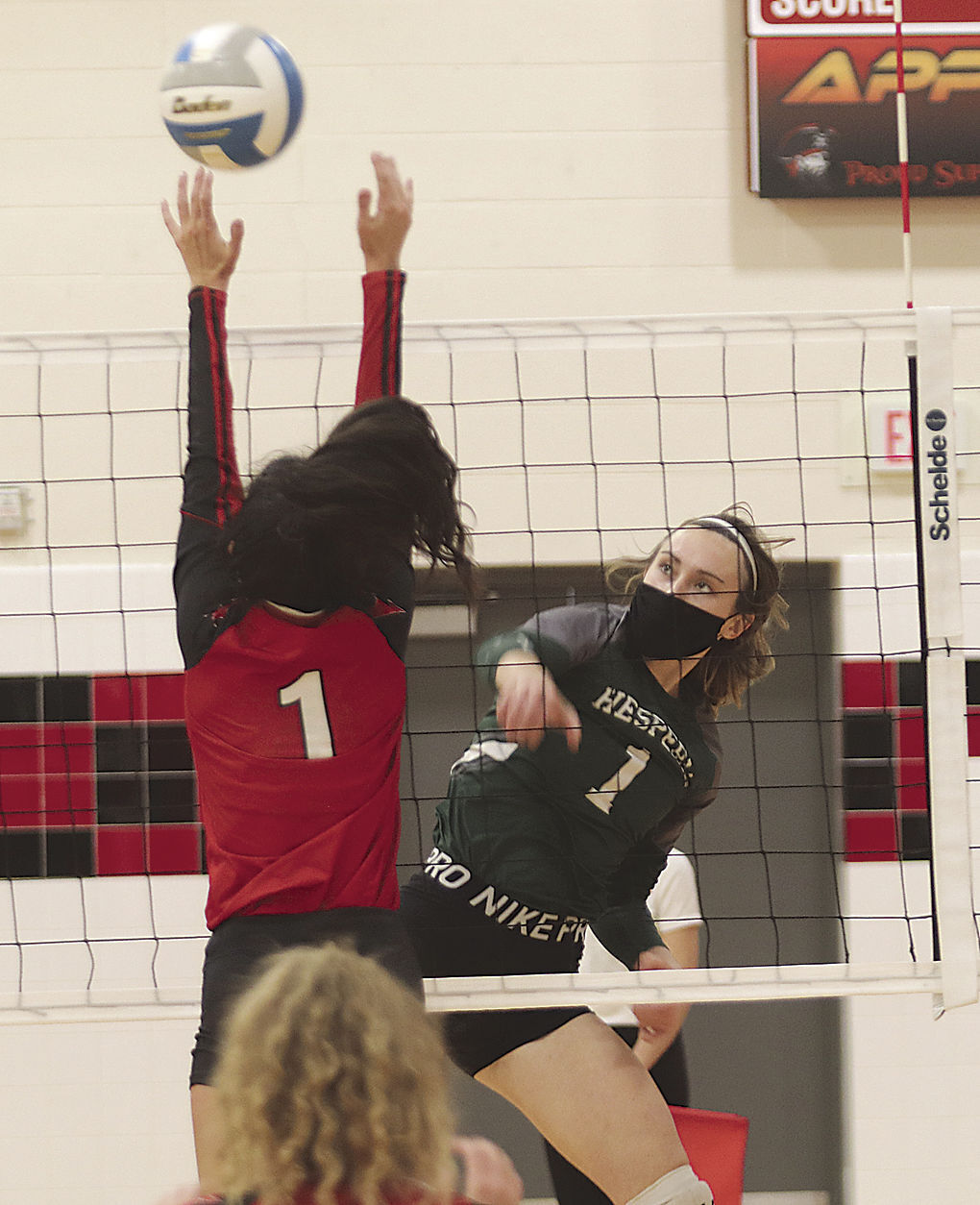 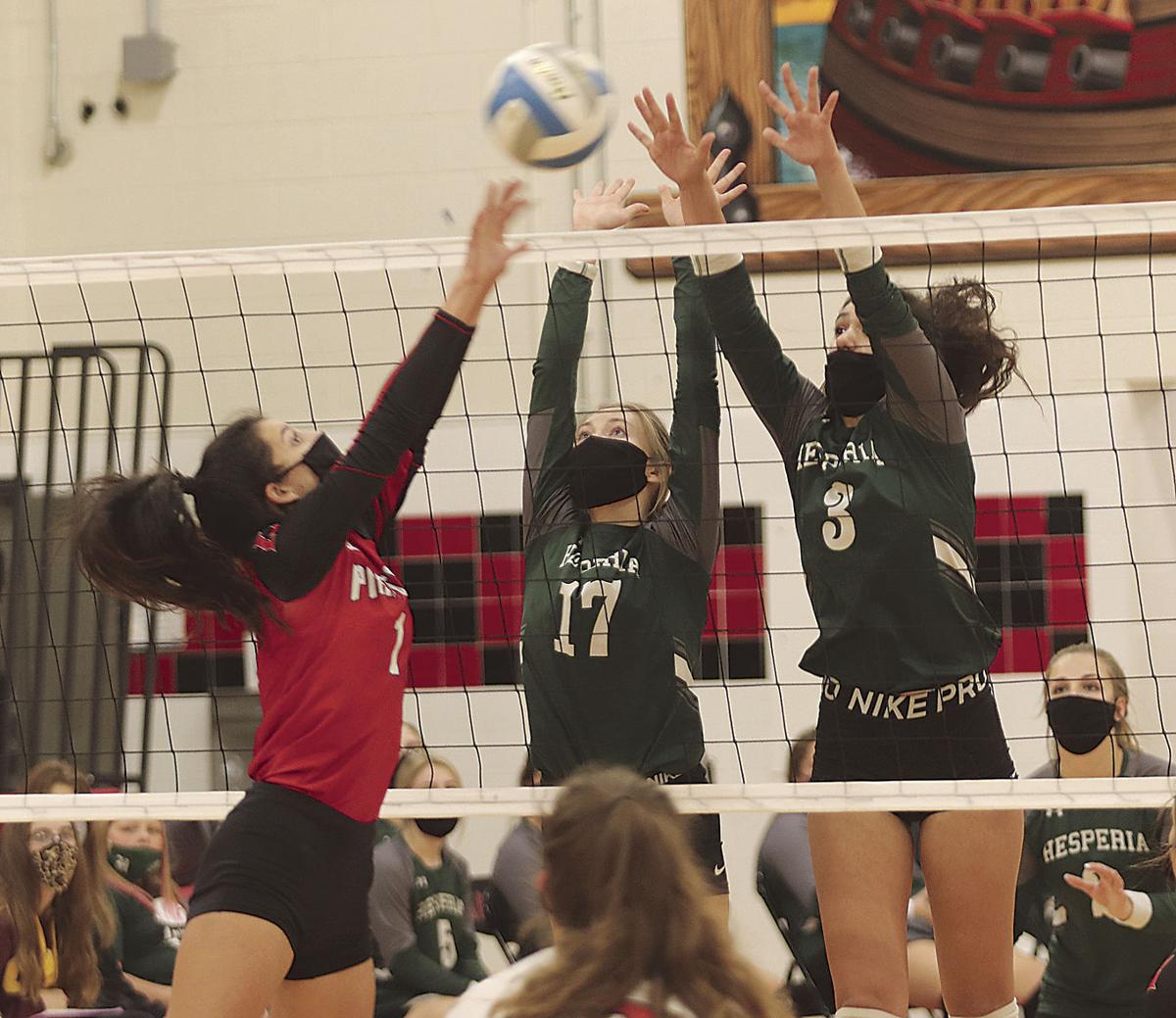 Hesperia's Rylee Gleason (5) sends the ball over the net during Wednesday's district semifinal match against Hart. The Panthers won, 3-0.

The Pirates faced long odds from the get-go; not only are the Panthers favored to win their third straight district title, but Hart was also down two of its key players, Ariana Borrego and Audrey Aerts. The Pirates put out a good effort without them, but even with them it would've been a tough task to knock off Hesperia.

"We were in a brand-new rotation, and we were out two key players today," Hart coach Amanda Van Sickle said. "It just wasn't clicking like they normally do, and when you're trying to dig out Emily (Bayle) and Rachel (Romero)...They played well. We just couldn't capitalize on those plays."

Despite those obstacles, Hart did manage to take early leads in games two and three, leading 6-3 in both games. However, each time the Panthers roared back behind a quick serving run by Aria Thomas to take the lead.

Hesperia, coach Monica Grimard said, is used to shaking off slow starts in games, so she wasn't concerned when her team had to do it again Wednesday.

"I wasn't too concerned, because, I hate to say it, but that's the way they play," Grimard said. "They make some mistakes, but they usually can come back and bring it back. This year, we've had a lot of ups and downs, but the teams we've had more trouble with have been the bigger teams, or the teams we've underestimated at the beginning."

Hesperia's offense again was led by Emily Bayle and Rachel Romero, who combined for 20 kills (Bayle had 11). The duo has led the way all year. The Panthers have relied heavily on them in the absence of big numbers from the middle, although Brooke Billings has been an occasional threat. Grimard said that Rylee Gleason has performed well when thrust into the offense too. However, with what height Hesperia does possess concentrated in the team's least experienced players, there's no question that Bayle and Romero are the engine.

"We do rely on the two a lot," Grimard said. "We don't have height...Generally, those are the two."

For Hart, Cassidy Copenhaver, a senior, recorded a team-high 17 digs, and Morland Gamble, filling in at libero, added 16. Finley Kistler chipped in 12 digs and had eight assists. On offense, it was Copenhaver and Avery Beachum with five kills each.

Van Sickle emphasized that she was pleased with her team's effort given the lineup rejiggering that was needed without Borrego and Aerts.

"Before we lost the two (players), we were just working on fine-tuning what we were working on all season," Van Sickle said. "Honestly, it was just a rotation. We just wanted to make sure we knew where we were going and trusting each other in those new roles."

Grimard said Hesperia would have to be at its best to beat White Cloud, against whom Hesperia won twice earlier this season in close matches. Alexis Strait, the Indians' star player, will be the focus.

"We definitely have to be on it," Grimard said. "We can't mess around. (Alexis) Strait is an excellent player all around. We've played them a couple of times this year. We have to beat them to the block. We have to be able to read Strait. We have to take them out of their system.

"We were in this situation two years ago with White Cloud, at Holton. I'm sure they want to beat us. It's kind of a rivalry. It should be a good match. We always have good matches with White Cloud. If we're not on, we'll struggle. But I'm excited."

However things turn out, Grimard said she was thankful her girls will have a chance to compete, noting that Shelby and Ludington, among other area squads, didn't get that chance because of COVID-19.

"That could've been us so easily," Grimard said. "Those are friends of mine who have daughters that play, and it's terrible. All season, I was worried that might happen to us. To get this far, I'm just glad we get to play and get a chance to get the three-peat."