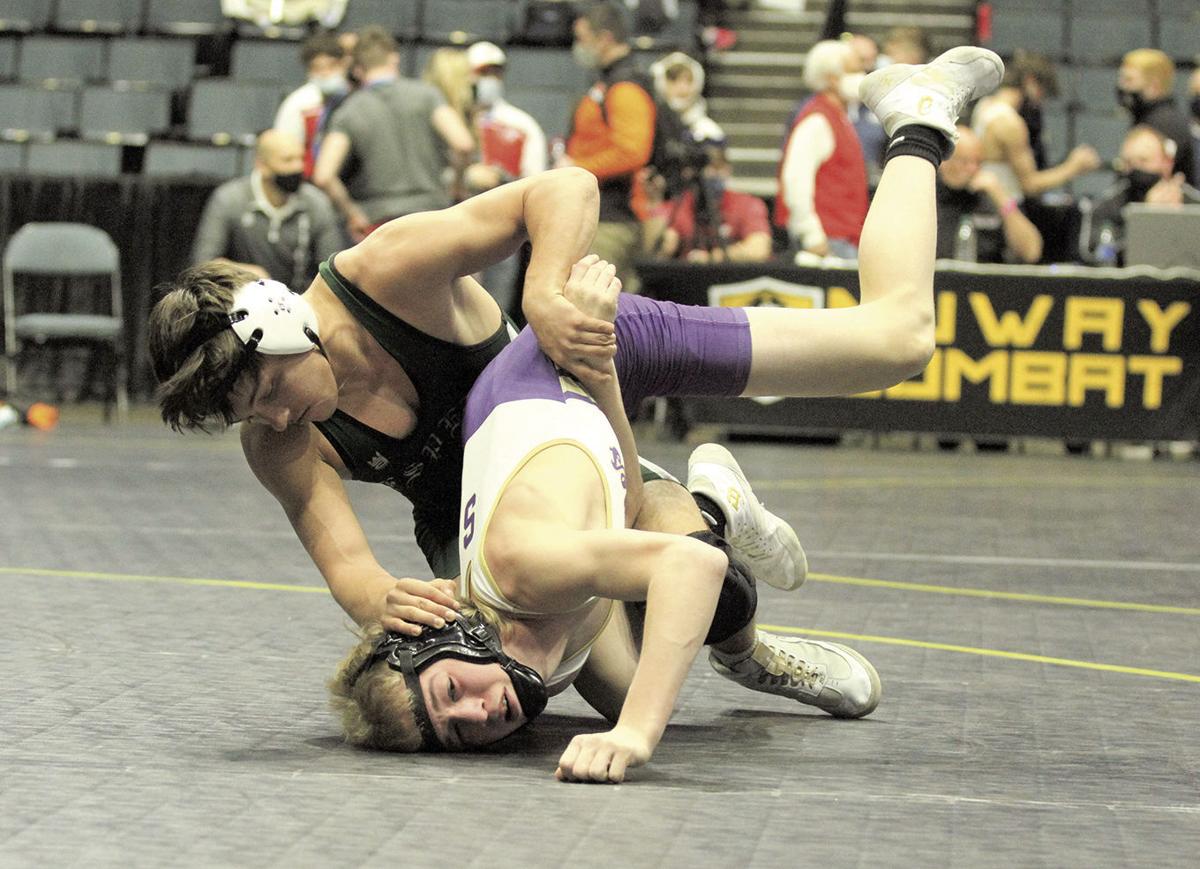 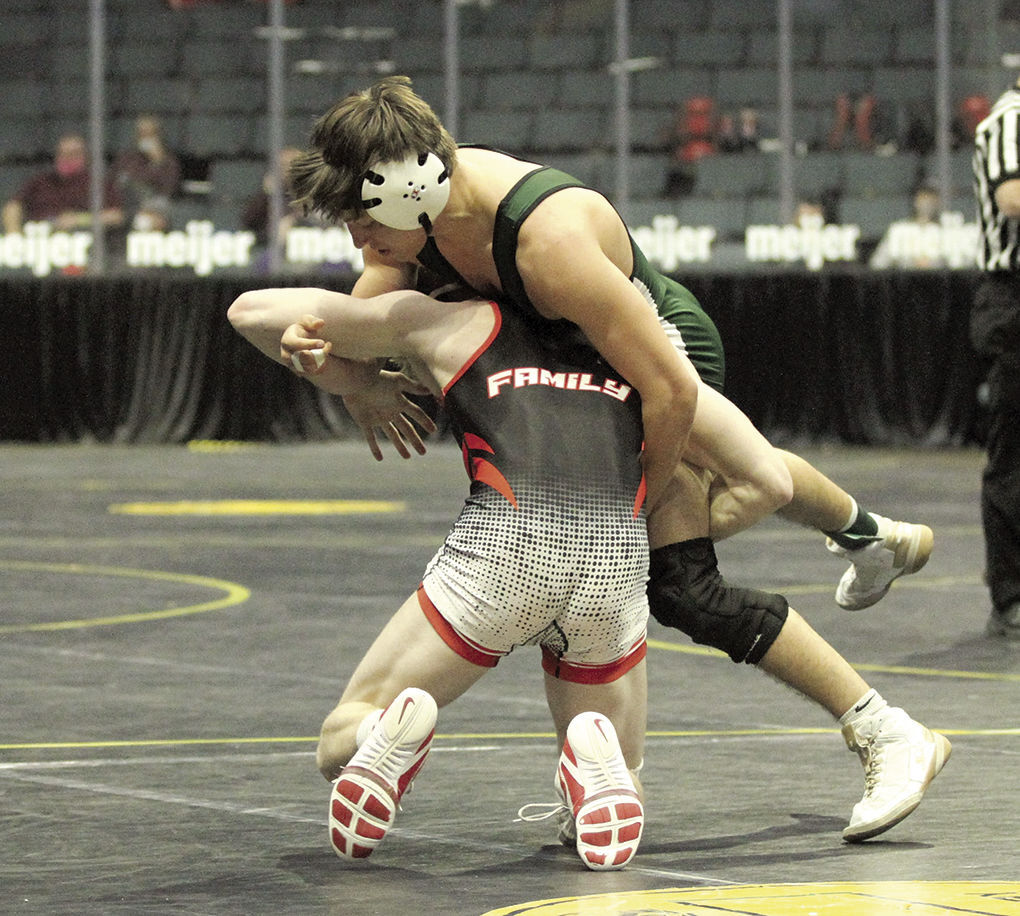 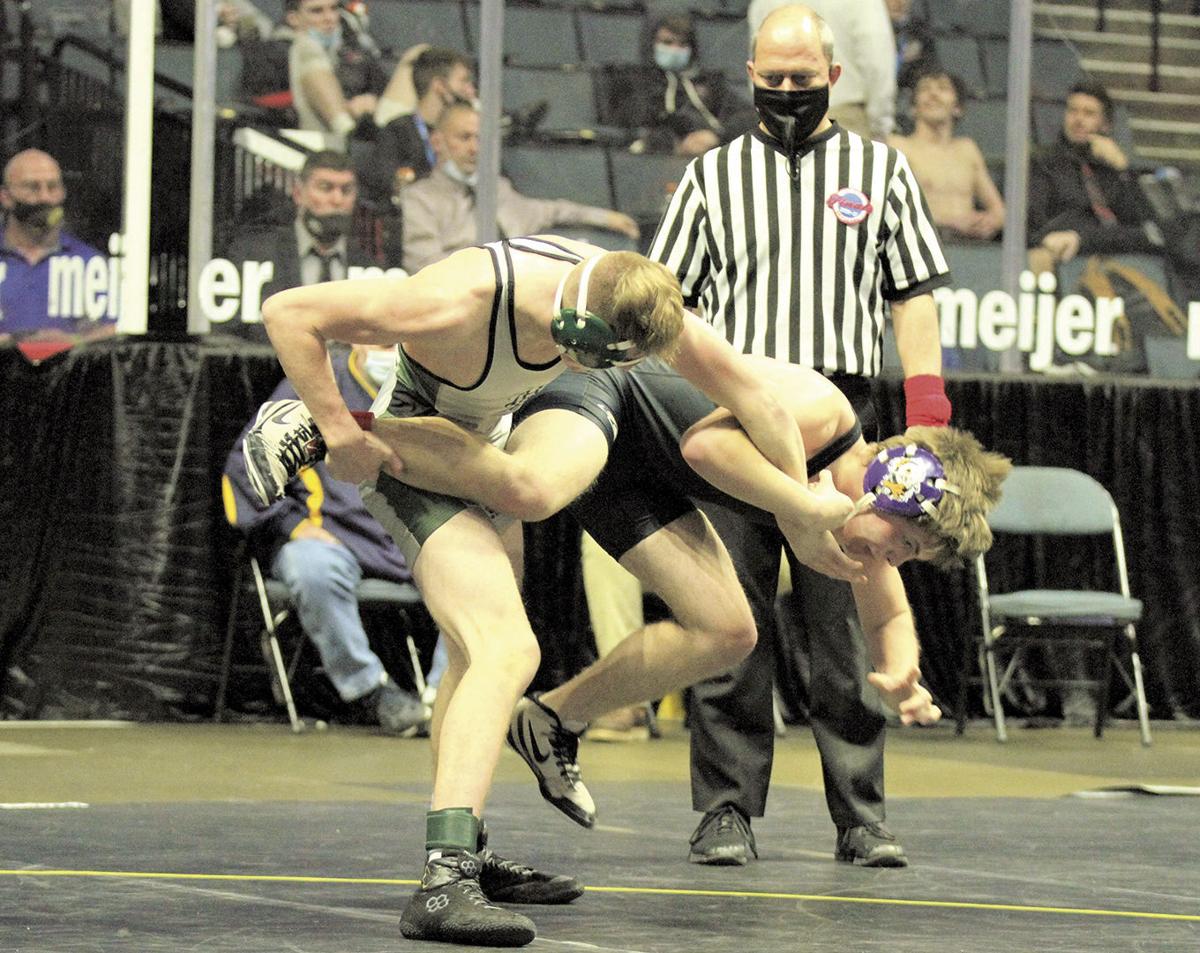 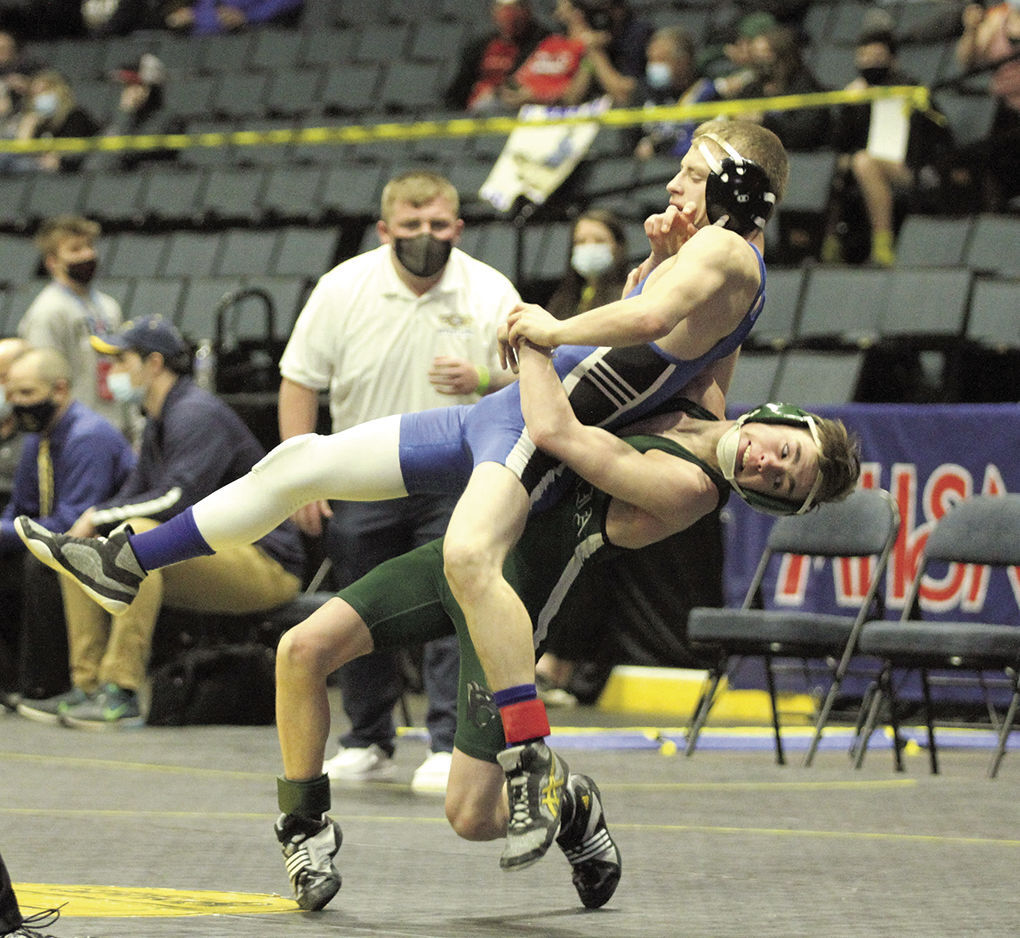 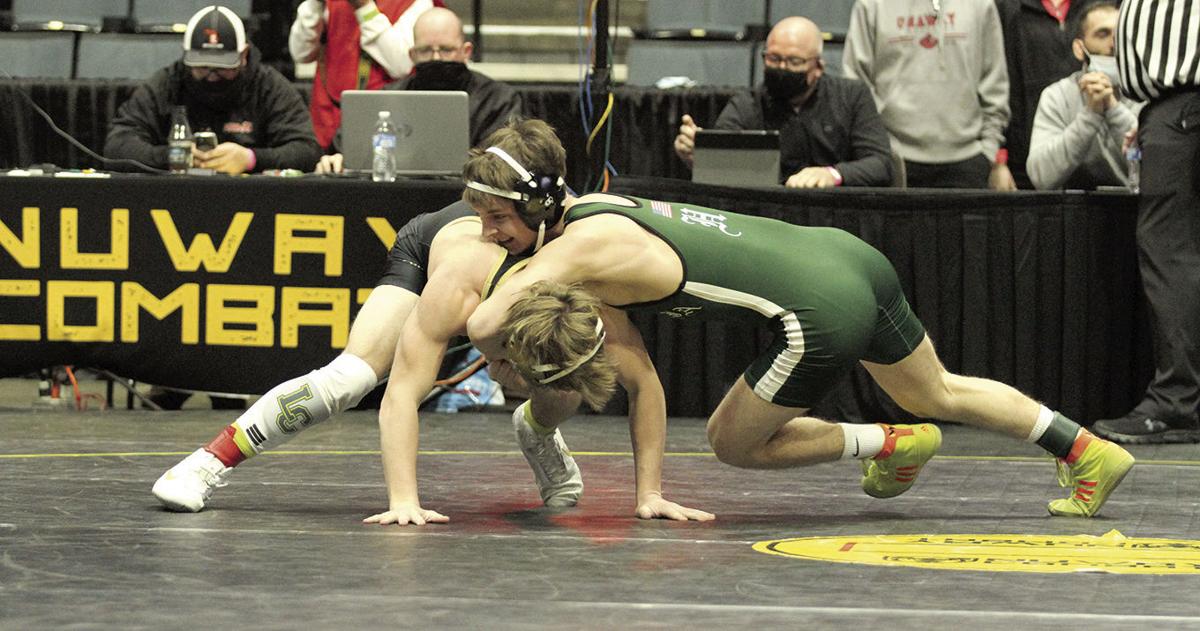 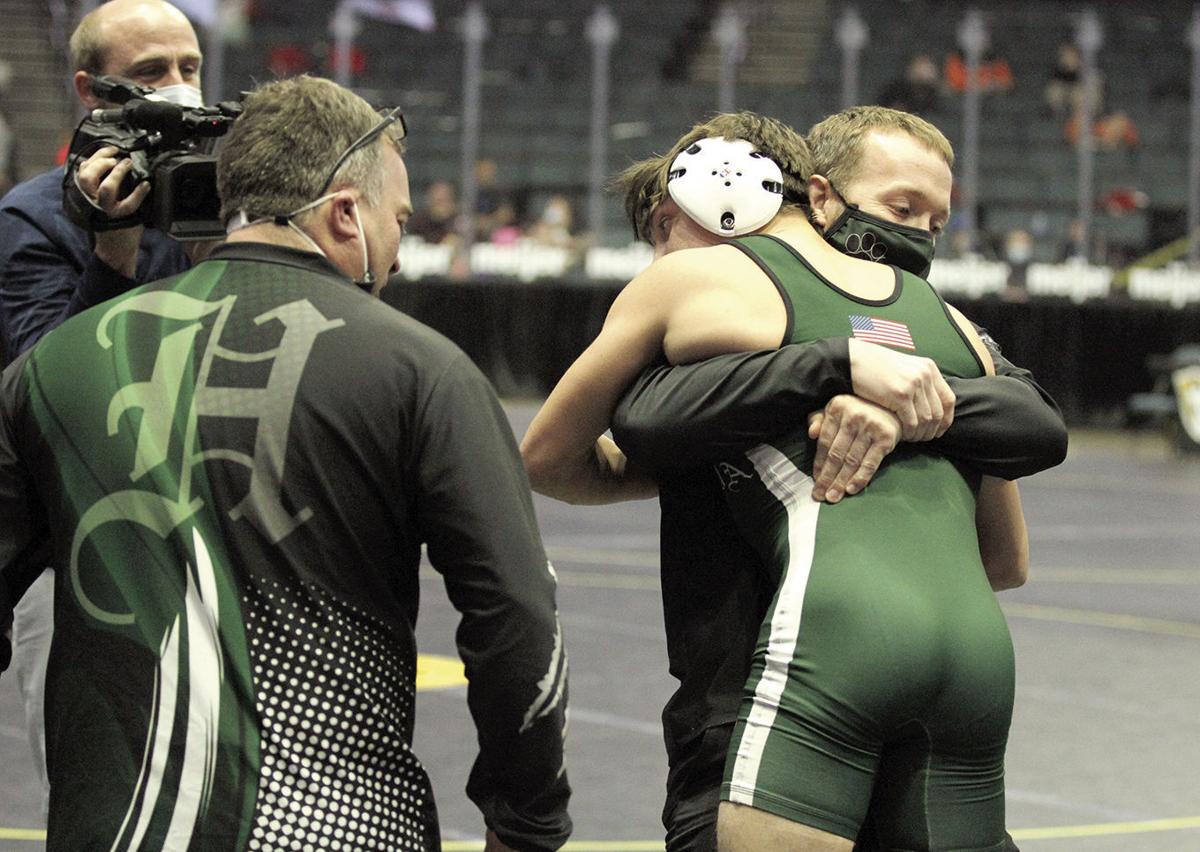 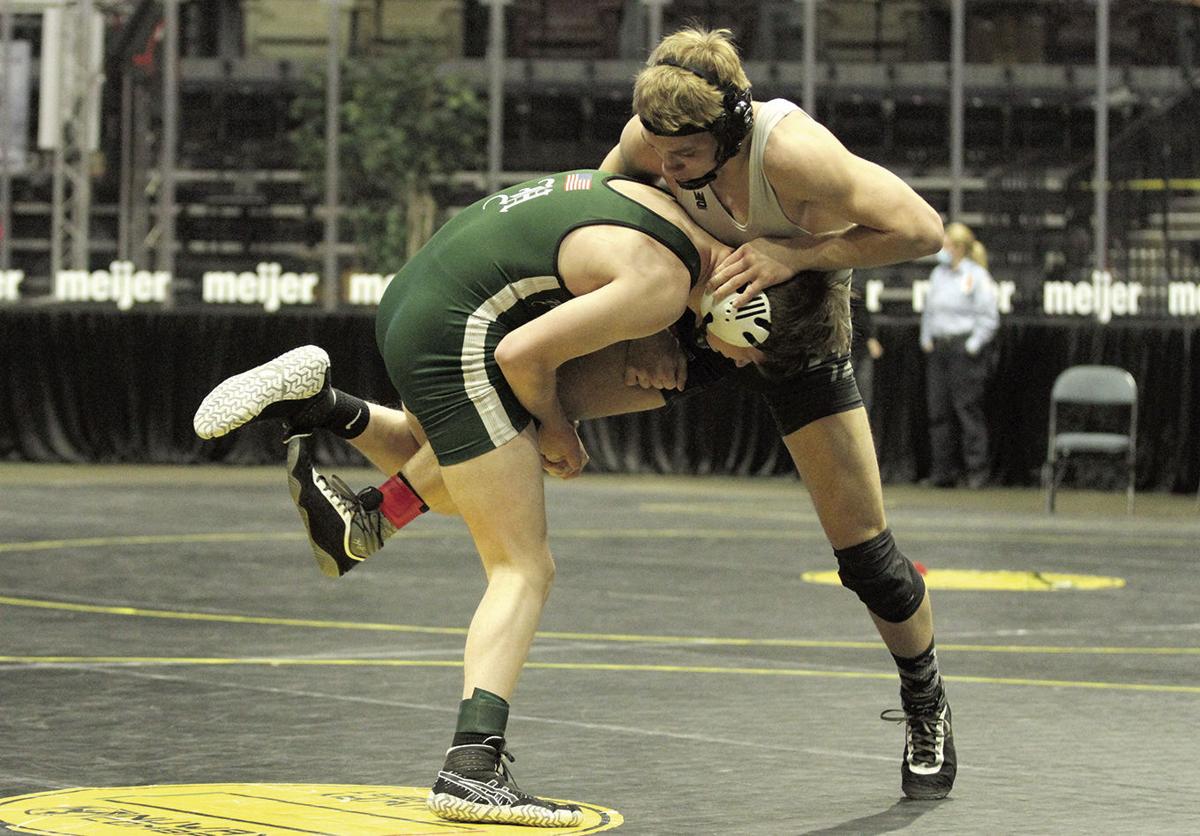 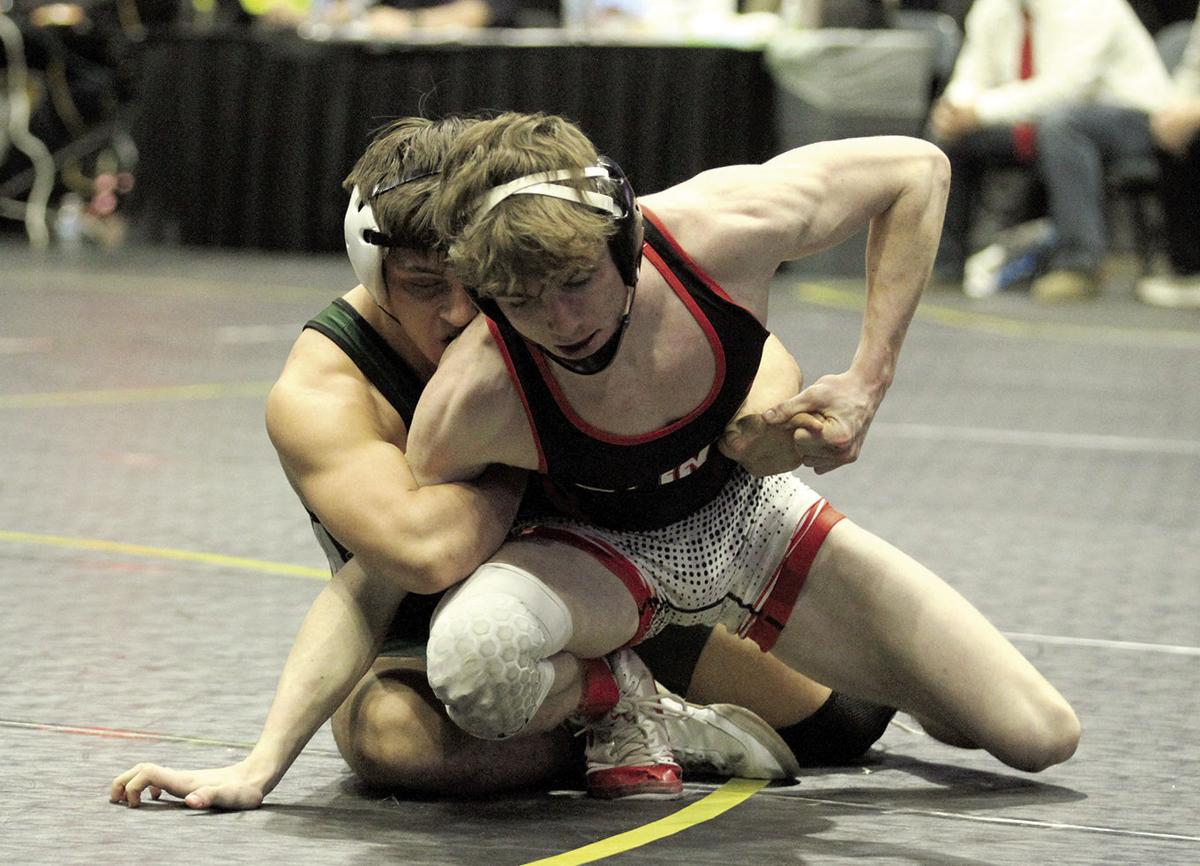 GRAND RAPIDS — Hesperia senior Aydan Sturtevant-Roesly never trailed in any match Saturday at the Division 4 individual state tournament, earning a title at 119 pounds to cap a tremendous career of 128 wins. He's the first Panther to reach the top of the podium since Gerrit Yates did so in 2017.

Sturtevant-Roesly, who picked up his third all-state honor in the process and will, coach Doug Baird said, be academic all-state as well, defeated Clinton's Zak Shadley in a hard-fought 2-1 decision in the state title match. Sturtevant-Roesly scored a two-point reversal early in the second period and held the lead at 2-0 until Shadley managed an escape point late in the final period. From that point, Sturtevant-Roesly held off several attempts by Shadley to score a go-ahead takedown.

Baird said Sturtevant-Roesly's run was even more impressive considering it happened all in one day, a departure from the usual two-day format of the individual finals.

"Never before since I've been alive has Michigan put on a one-day tournament," Baird said. "You've got to have a nice set of lungs, a lot of composure, and you have to be careful of your emotions.

"He really wrestled in control. He took advantage of his setups and wrestled a tough tournament. He not only used his physical abilities, but...really thought his way through the matches. He knew what he needed to have to stay ahead. He didn't push into things to take a risk. He wrestled like a good, gritty Hesperia senior."

Sturtevant-Roesly went all six minutes in all four of his matches, earning 9-0 major decisions in each of his first two matches, then defeating Payton Rogers of Hudson 8-2 in the semifinals to earn his matchup with Shadley. Rogers took third place last season to Sturtevant-Roesly's sixth.

Baird said what has stood out about Sturtevant-Roesly in his career is his consistency.

"He's just been steady Eddie for Hesperia," Baird said. "Hesperia wrestling has certainly had some three-time all-staters, and we welcome him into that category of wrestler in our school... It's been a couple years since we had a state champ and we're excited to have another guy achieve that status."

Sturtevant-Roesly was just one of four Hesperia wrestlers who were all-state at the individual finals. Mack Baird completed his career with a third all-state honor by placing fourth at 130, River Roberson was fifth at 135 and Stephen Priese took eighth at 103.

Baird's performance was a highlight for him but also certainly for his dad. It was a tough bracket for Mack, who fell to defending state champion Bronson Marry in the semifinals after two impressive wins - he held a lead in that match before getting pinned. He then scored a pin of his own to get to the third-place match. There, he lost a 12-11 scrapper to Zach Ouillette of Oscoda.

Although Baird didn't get another shot at Jesse Brumm of Maple Valley, who won the state title, coach Baird noted that his son wrestled Brumm about as tough as anybody in previous rounds; Mack dropped 5-1 and 3-0 decisions to Brumm in the regional and district finals respectively.

"He went to state four year sin a row and put a lot of wins on the board," coach Baird said of Mack. "He probably would've been close to 200 (without the shortened season)."

Roberson had a strong 4-2 day at the finals, earning two wins by pin and another by major decision while losing close decisions in both defeats. He ended the day with an overtime victory over Gary Cramer of Schoolcraft in the fifth-place match and joined his dad, Panthers' assistant coach Bruce Roberson, as Hesperia all-staters.

"He just continues to improve," Baird said of Roberson. "He wrestles with any kid in the state in our division. He's got as good a chance as anyone next year to have a happy ending at the finals if he's healthy and works hard. He got put out by that Schoolcraft kid for all-state last year, and this year he beat that kid for fifth place.

"To have a family wrestling like that, that's exciting."

Priese rounded out the Panther all-staters. Although the freshman didn't actually win any matches on the mat, as both of his wins came due to withdrawals by opponents, that outcome was representative of how the coronavirus became an invisible second opponent for all wrestlers this year, in addition to the ones they faced on the mats. Priese went against the eventual state runner-up, Capac's Loreto Frangedakis, in his first finals match.

"I think he earned that eighth place," Baird said. "He had a tremendous season. He's also made tremendous gains as a human being. That's what sports are for."

Korbin Klaus was the only Panther to wrestle at state without earning a medal, but even that had its own victory, as the bye Klaus received in the consolation bracket was his 100th career win.

Klaus had some bracket misfortune, drawing eventual state champ Gavin Wilmoth of Traverse City St. Francis in his first match and facing eventual third-placer Melvin Minniear in the blood round. Still, he wrestled hard against both. Baird said he was particularly impressed with Klaus' toughness after getting thrown to the mat hard late in the third period against Minniear in a match that was all but decided by that point.

"He got up with 10 seconds to go and had some courage," Baird said. "He got up and duked it out after that slam...I'm proud of the kid."

Baird himself earned some hardware too, being voted regional coach of the year. Almost sheepishly, Baird noted that the vote was likely a result of his picking up his 500th career victory as the Panthers' coach this season.

Although the team success wasn't there as Hesperia would've liked, Baird said the wrestlers he had enjoyed a great year.

"Most of the year, we only had eight guys at practice, and we medaled half of them," Baird said. "Our guys tested 35 times this year (for coronavirus). along with the Hart and Shelby kids. The county should take their hats off to these guys...We were blessed to get into those tournaments and have those lifelong memories."