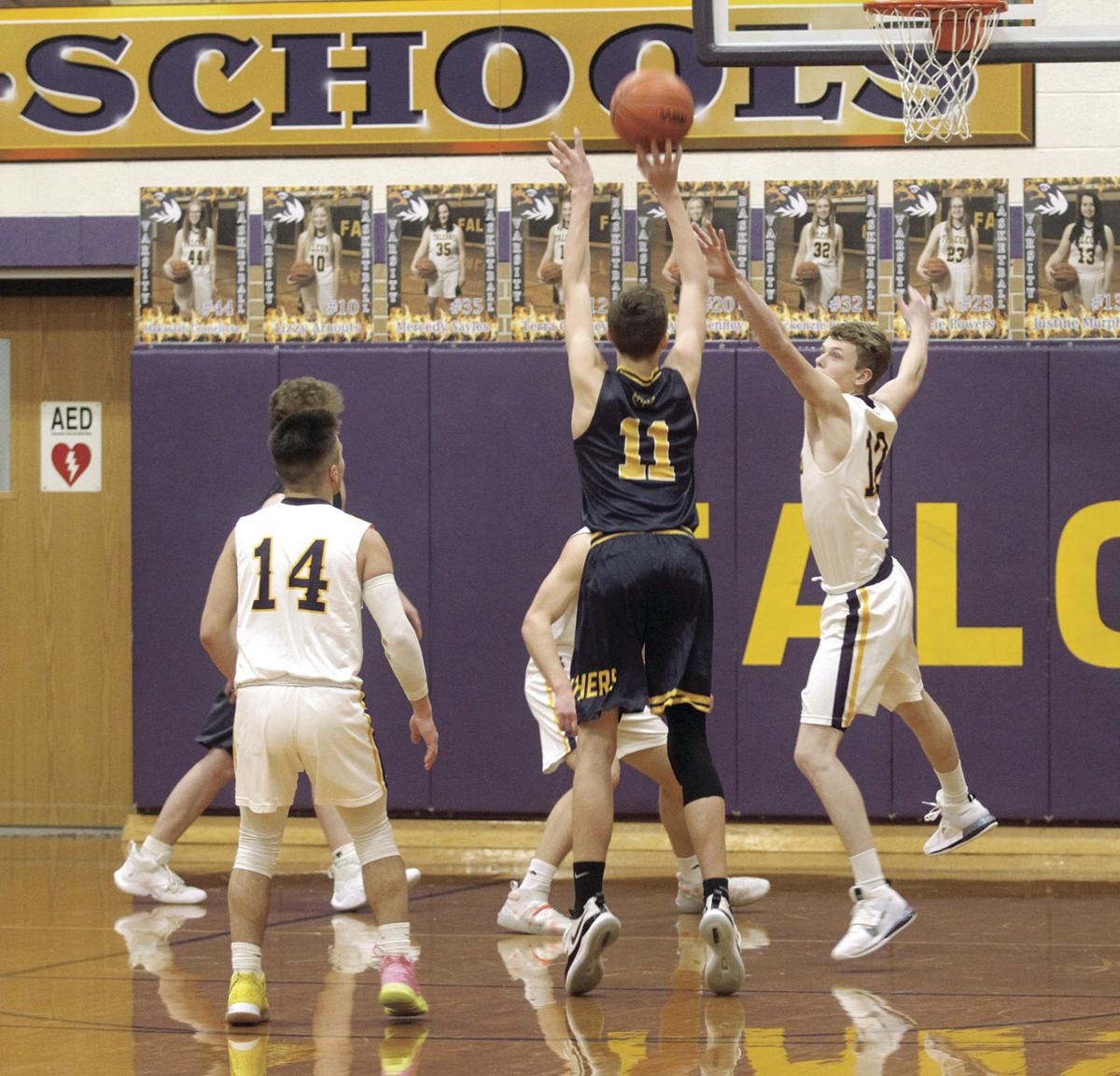 Baldwin’s Dylan Hibma puts up a shot as Pentwater’s Ethan Wilkinson rises to try to block it Wednesday at Pentwater. 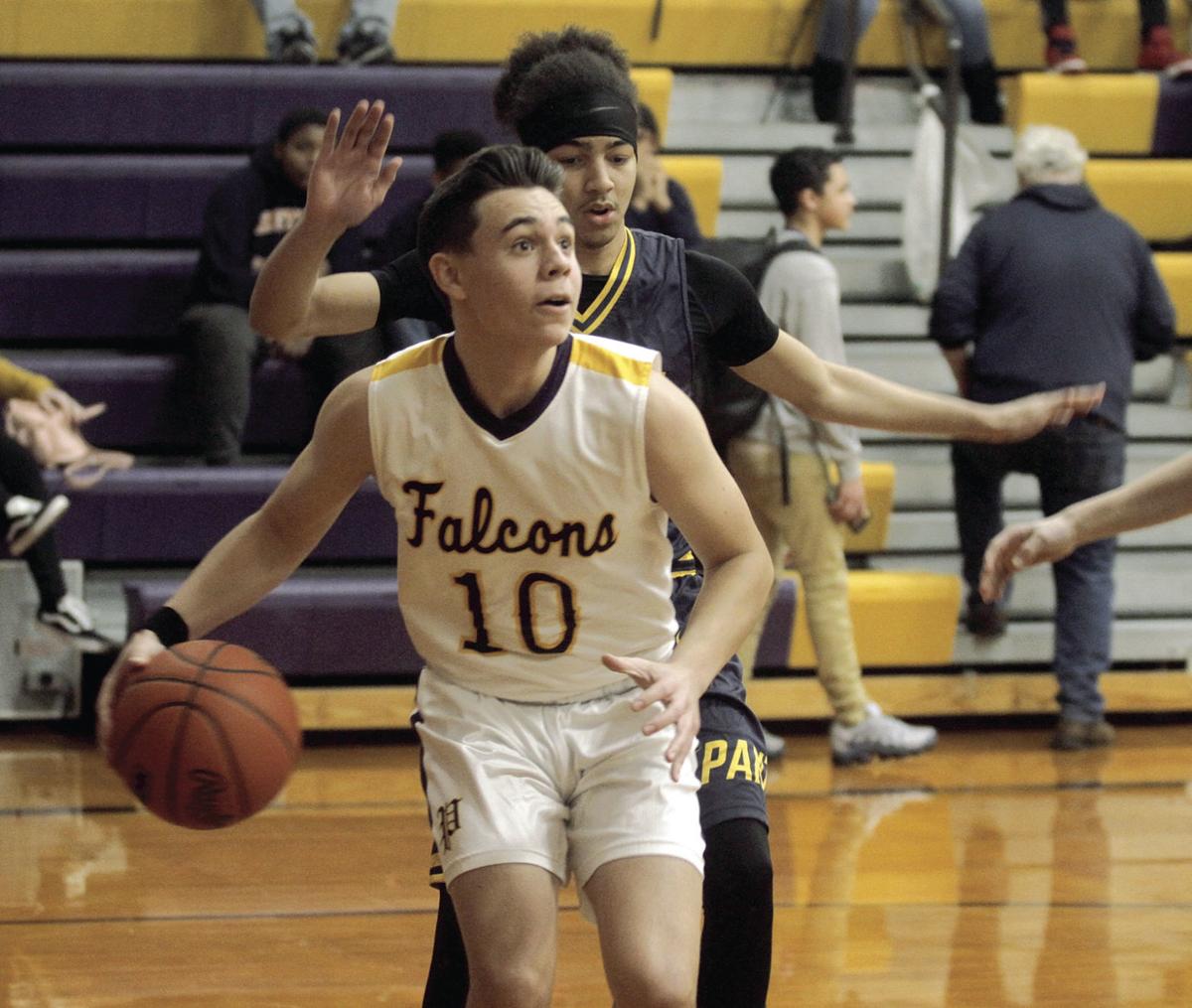 Pentwater’s Gannon McDonough looks to put up a shot after getting past a Baldwin defender last Wednesday.

Baldwin’s Dylan Hibma puts up a shot as Pentwater’s Ethan Wilkinson rises to try to block it Wednesday at Pentwater.

Pentwater’s Gannon McDonough looks to put up a shot after getting past a Baldwin defender last Wednesday.

Coming into his third year on varsity, Pentwater head coach Ashley Wojtas knew even without the label of a senior, he would lead and play like one.

“His athleticism and knowledge of the game, it shows with some of the sophomores we have. You can see him pulling them along and he’s really turning into a great captain for us.”

Hofmann’s 20-point and 18-rebound night last Wednesday helped propel the Falcons to yet another West Michigan D League win, this time over Baldwin, 57-45.

The Falcons (9-1, 8-0 WMD) jumped out quickly to an early 7-2 lead but a run by the Panthers capped off by a Carmelo Lindsey three with 4:30 left in the first quarter gave Baldwin a 8-7 lead. After the Panthers extended that lead to 11-7, Hofmann went on a personal 5-0 run to help regain the lead for the Falcons, leading, 12-11, with two minutes remaining in the quarter.

The lead would change hands three times before a buzzer beating three by Julien Nyberg ended the first as the Falcons came away with a 17-15 lead after one.

It was the Panthers (6-5, 5-5 WMD) turn to jump out quick offensively in the second quarter, jumping out to an 8-1 run, and grabbing a 23-18 lead with five minutes to play in the half.

The Falcons didn’t waste much time extending their halftime lead, as Hofmann hit a corner three 15 seconds into the third quarter to extend their lead to four, then a 6-3 run helped stretch that lead to 36-29 with under five minutes to play in the quarter.

Back-to-back threes by Gannon McDonough capped off a 12-5 run by the Falcons to end the third quarter with their largest lead of the night, 48-34.

Walkerville boys basketball anxious to get on the court

After a Hofmann layup to start the fourth quarter made it 50-34 Falcons, the Panthers instituted a full court press to force pressure onto the Falcons, which paid off as it led to an 8-1 run, cutting the Pentwater lead to just nine with four minutes to play in the final stanza.

Following a timeout, the Falcons came out in somewhat of a stalling offense to try and burn some time off the clock during their possessions. It worked in Pentwater’s favor, with an Aveon Hobbs three being the only points they were able to allow in the final four minutes, as they were able to hold on for the win.

Despite being on a nine game winning streak and undefeated in league play, Wojtas still doesn’t think this team has reached its peak.

“We have growth to make in the post and rebounding. Khole’s been great on the boards for us but I’d like to see more guards getting in there and grabbing a few. Transition could get cleaned up a bit too, I just think there is some growth to be seen still.”

Along with Hofmann’s big night, McDonough added 15 points while Tyler Plummer-Eisenlohr chipped in with nine.