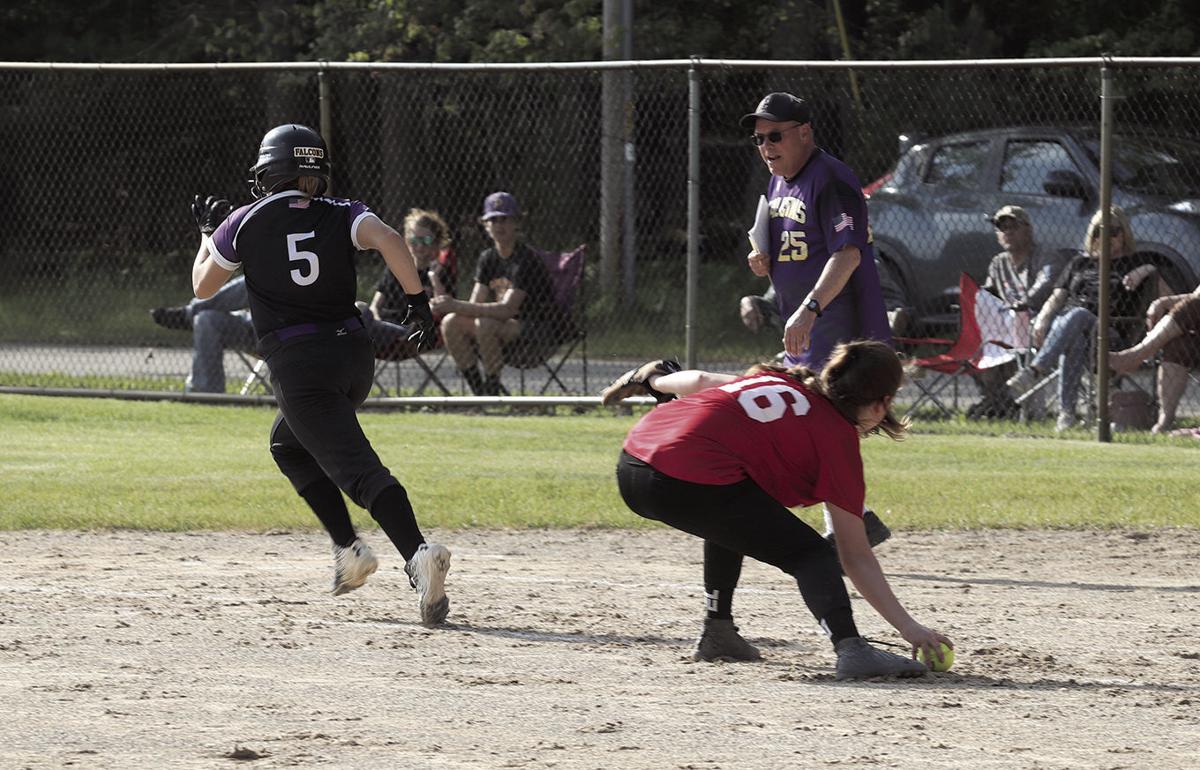 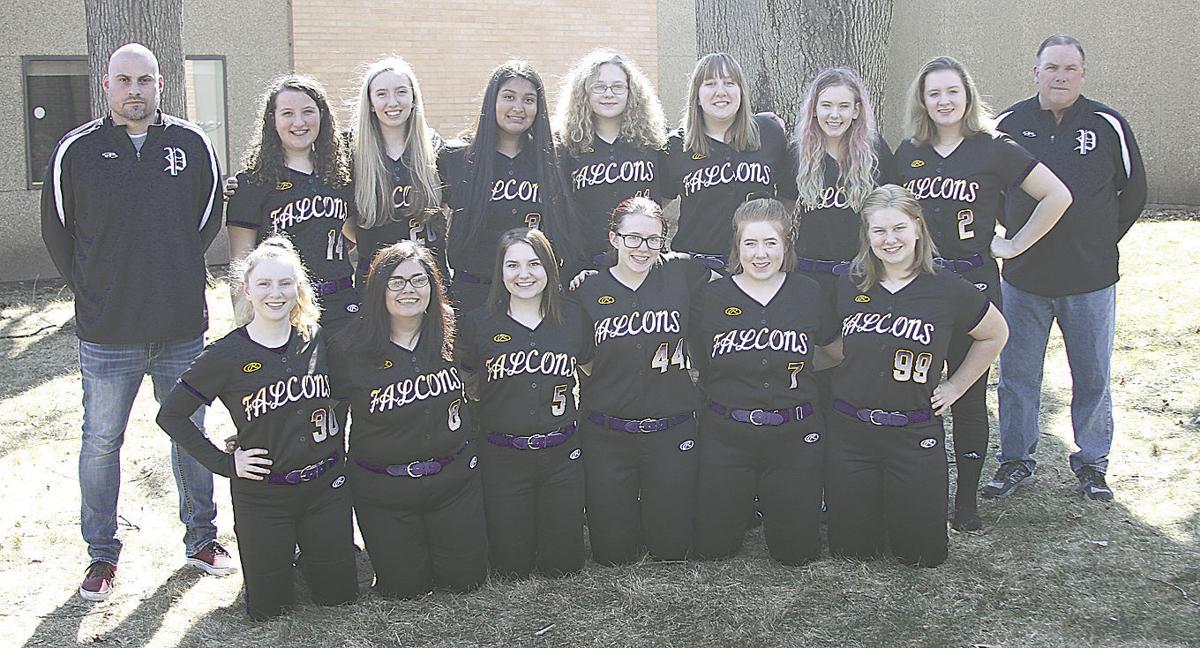 Pentwater’s 2019 softball team photo included Makaylah Cornelisse (fourth from left, front row). Cornelisse was denied her senior season of 2020 due to the spring sports shutdown, but returned in 2021 to coach many of her former teammates as an assistant to Falcon head coach Steve Rossiter (left of second row).

Pentwater’s 2019 softball team photo included Makaylah Cornelisse (fourth from left, front row). Cornelisse was denied her senior season of 2020 due to the spring sports shutdown, but returned in 2021 to coach many of her former teammates as an assistant to Falcon head coach Steve Rossiter (left of second row).

When so many senior athletes had their final seasons wiped out by the COVID-19 pandemic in spring 2020, it was a tough pill to swallow. Ultimately, graduating seniors had no real option but to move on to the next stage of their lives.

Rossiter said the idea to join the staff was Cornelisse’s, but he and his dad, assistant coach Steve Rossiter, Sr., enthusiastically supported it.

“She’s every coach’s dream player, you know?” Rossiter said. “Missing her senior year was really tough on her, and she wanted to find a way to connect to softball even though she couldn’t play.”

Cornelisse said she’d probably have been interested in coaching the team anyway, but the loss of her own senior year playing made her desire to continue to be around the sport even stronger.

The big obstacle that often comes up when a player returns to coach their former teammates is whether they are able to assert the authority they need to, but Cornelisse said that as the season continued, that became less and less of a problem.

“I was a little nervous about it, because I’m not that much older than the girls,” Cornelisse said. “(I thought) that it would be like playing all over again, but I like having a different perspective on the girls and talking about their growth and watching them grow as girls as well as softball players.”

Cornelisse felt she got better and better about setting the line between ‘former teammate’ and ‘coach’, although she allowed for one exception.

“When I was in the dugout, I was cheering with them instead of going from a coach’s perspective,” Cornelisse said. “When I coached first base, I was into how the girls were under pressure and comparing how I did when I was under pressure. There were some tough ones and they took it like champs, so it was pretty awesome.”

Cornelisse was available for her new venture after leaving Grand Valley State after a semester; she’s now working multiple jobs in Pentwater while also trying to grow her budding photography business. Even amid all that, though, she was ready and willing to make softball a priority. Rossiter said that he had to convince her to prioritize her day jobs on occasion.

Having a younger presence on the staff, and especially someone who had played with the Falcons just two years prior, was an asset to Rossiter and the team.

“She still has such a great connection with the girls,” Rossiter said. “She can relate to the girls. The biggest thing is knowing if a girl’s having a rough day. As a coach, you can see it if it’s really clear, but if it’s someone with an extremely close connection with the players, she can offer some insight well ahead of time. That’s huge.

“You want to push, but you have to know your limits. That was one thing I liked. I’d constantly ask her, ‘Do you think I’m being too hard on these girls today?’ And if I did get a little pushy or set my expectations too high, she’d help rein me in.”

By the time the season was winding down, Rossiter was turning his new assistant’s work into something of a coach apprenticeship, explaining in-game decisions. By the time the Falcons played their last regular season game — an exciting 4-3 defeat to Mason County Central — Rossiter was pleased with Cornelisse’s growth.

“It was a game of chess,” Rossiter said. “I kept explaining to her each inning, here’s why I’m trying to have this girl steal or this girl bunt. In a game like this, one base here or there can be the difference in the game. You have to know your batters and know what they’re capable of to make something happen.

“To play up against MCC, and they had a phenomenal pitcher and a great catcher, you have to be paying attention at all moments of the game. Her ability to know the situation, that we’re playing a tougher team, that we have to do the small things to give us a chance to win, that was the standout in my mind.”

There seems to be no question that Cornelisse will continue to be an assistant coach. In fact, she seems to have such a bright coaching future that Rossiter said he’s half-joked with her about becoming the team’s head coach someday. Even if it didn’t end up being at Pentwater, Rossiter sees the spark of a future head coach in his former player.

“Potentially, at some point, this will (have) an end date,” Rossiter said of his own softball coaching tenure. “I’d love for (her) to be someone to take over this program. She’d joke, ‘Oh, you’re never going to leave.’ I’d feel super comfortable handing the program over to her. She likes being around the girls, and she especially loves softball.”

“Taking over is definitely in the back of my mind depending on where my future career takes me,” Cornelisse said. “If I’m still doing it in the future, and I still want to do it, it’s definitely something I think about.”

However that particular dream plays out, Cornelisse’s impact on the Pentwater program should only get better the longer she’s helping coach the Falcons. With many top players expected back next season, the Falcons, who had a strong 2021 season, should be in position for an even better campaign next spring.

“As the season progressed, anything you could ask for, she did,” Rossiter said. “It was just an excellent experience and it was nice to inspire someone like her to hopefully continue coaching. It’s getting harder to find coaches anymore, and getting her started now would be a great stepping stone to continue. I’m very appreciative that she made this happen for herself.”

“Watching the girls get as far as they did, I was really proud of how they played this year,” Cornelisse said. “I’m really excited to get back at it next year. I think we’ll develop more than we already have.”