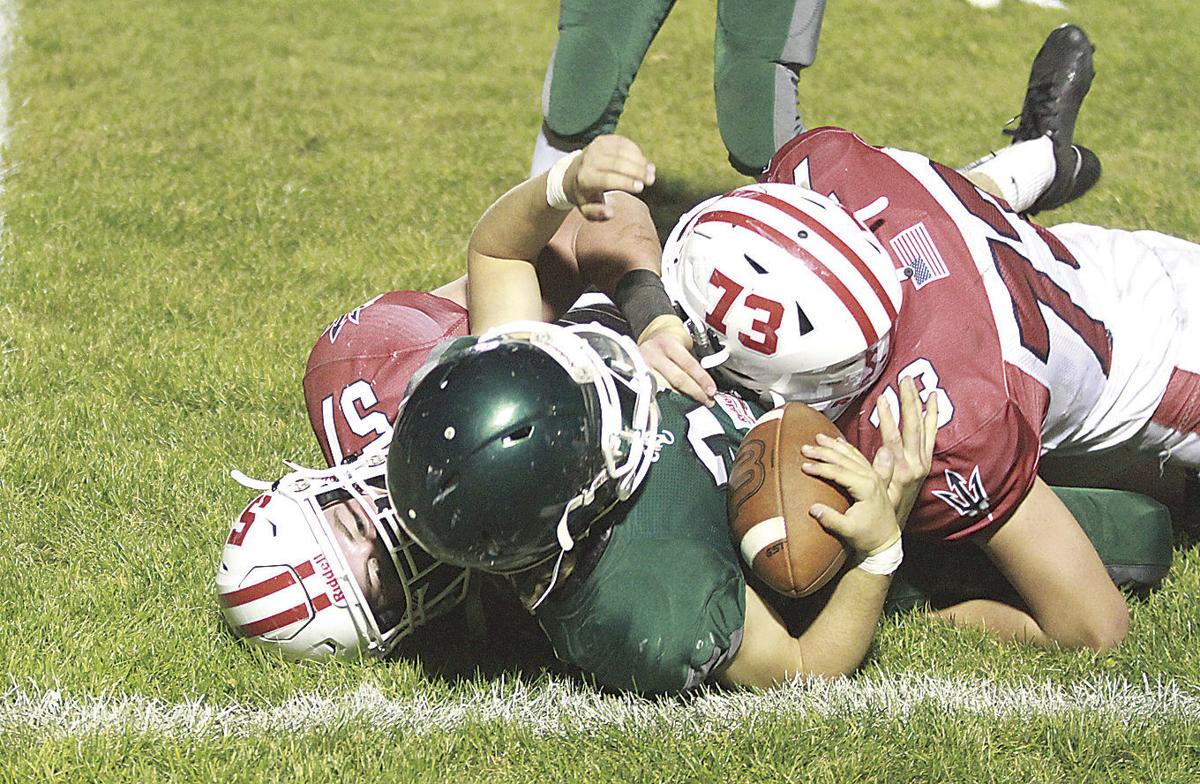 Hesperia's Mack Baird (with ball) is brought down by Holton defenders Jaden Israel (57) and Jarid Coburn during Friday's rivalry game at Hesperia. The Panthers won, 21-14. 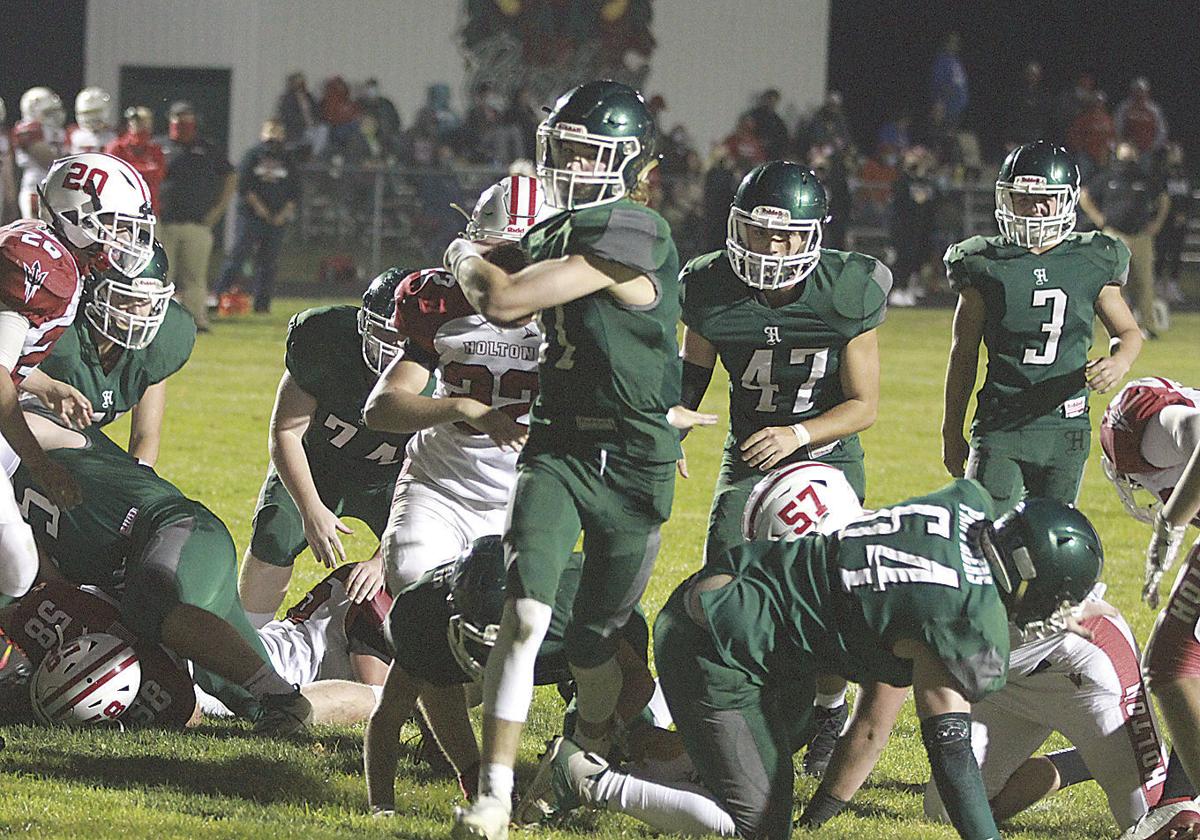 Hesperia quarterback Johnny Majersky (center) bulls his way into the end zone for a Panther touchdown during Friday’s game against Holton. Hesperia held off a Holton rally to win, 21-14. 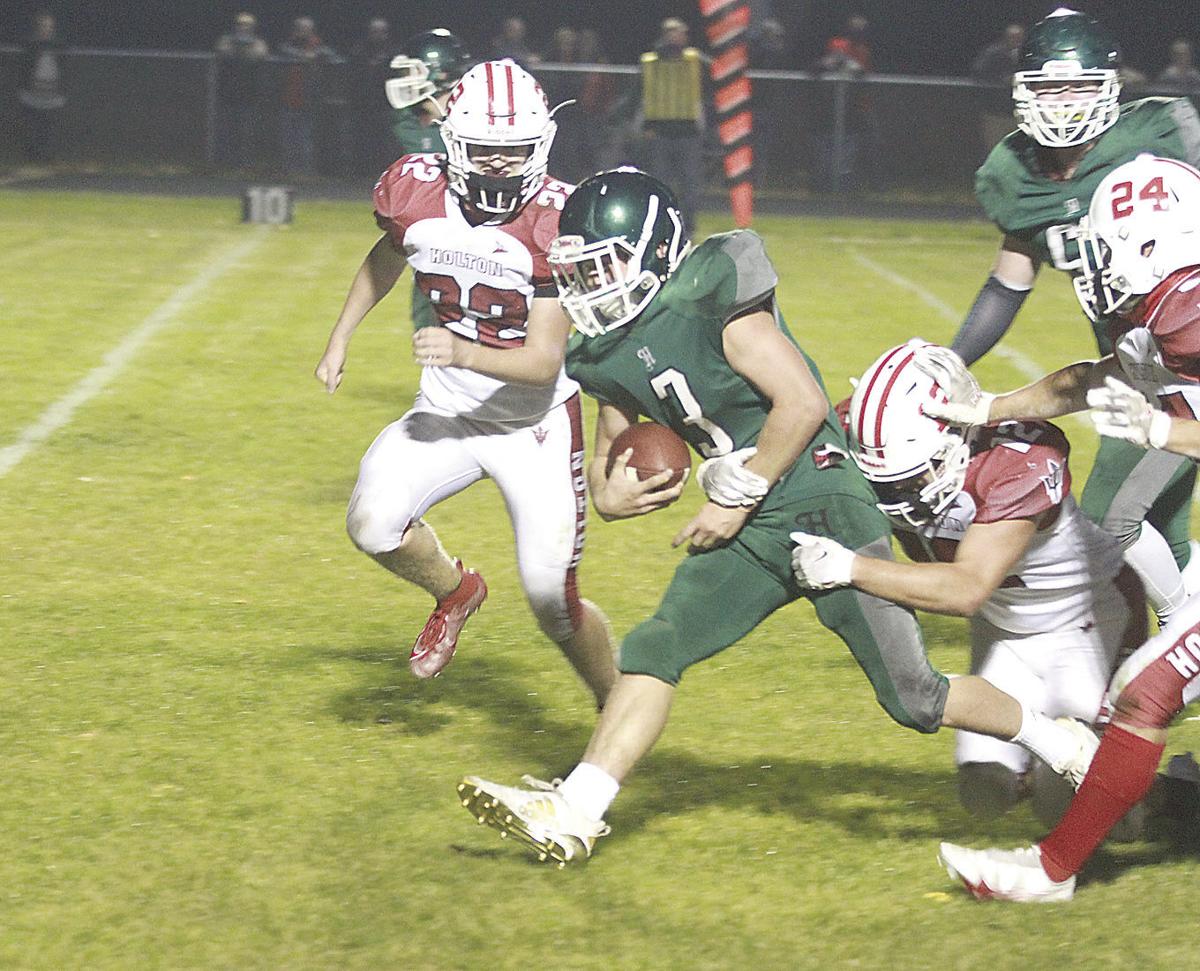 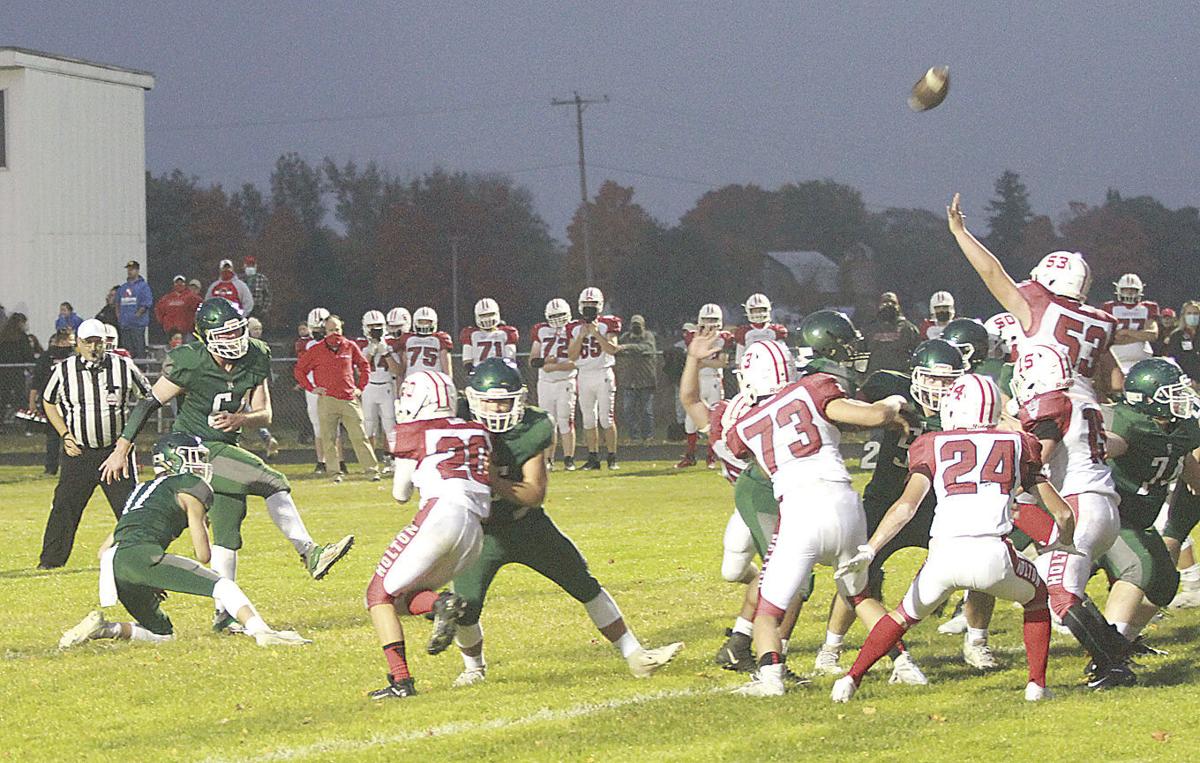 Hesperia kicker Jarrett Budde (64) puts an extra point through the uprights during Friday’s game against Holton. The Panthers won, 21-14.

Hesperia's Mack Baird (with ball) is brought down by Holton defenders Jaden Israel (57) and Jarid Coburn during Friday's rivalry game at Hesperia. The Panthers won, 21-14.

Hesperia quarterback Johnny Majersky (center) bulls his way into the end zone for a Panther touchdown during Friday’s game against Holton. Hesperia held off a Holton rally to win, 21-14.

Hesperia kicker Jarrett Budde (64) puts an extra point through the uprights during Friday’s game against Holton. The Panthers won, 21-14.

The headline matchup this week in Oceana County football, of course, is the rivalry showdown between Hart and Shelby, who will each enter the game with 0-4 records and thirsting for their first win. Before getting into that matchup, though, it’s worth taking a look at Hesperia’s second win of the season, which it earned over its own archrival, Holton. The Panthers will make a long trip for a non-conference game this week, taking on the Perry Ramblers on Saturday afternoon.

Hesperia hung on Friday night with a late defensive stop in its own territory to defeat rival Holton, 21-14.

The Panthers (2-2, 2-2 Central State Activities Association Silver) largely dominated play in the first half, scoring all their points in that span, before Holton came back with two second-half scores. The Red Devils held possession nearly the entire third quarter, as Hesperia fumbled on its only offensive play of those eight minutes.

The key series, though, came late in the fourth quarter when a botched punt snap resulted in Holton taking possession deep in Panthers’ territory. However, the Panthers were able to collect themselves and come up with the game-clinching stop.

“My guys had a gut check,” Hesperia coach Doug Bolles said in reference to the winning stop.

Mack Baird had a huge game for Hesperia, gaining 200 yards on 23 carries with two touchdowns. Johnny Majersky added 46 yards and another score on the ground. On defense, Gabe Prado recorded seven tackles, and Baird had four takedowns plus an interception.

Hesperia now hits the road for a game at Perry. The game will be played Saturday due to a lack of available officials for a Friday game. The Ramblers enter the game at 0-4 and have scored only 19 points all year, 13 of them in last week’s 38-13 loss to Stockbridge. However, they do play in a tough Greater Lansing Athletic Conference, and Bolles said his team won’t take Perry lightly.

“They’re 0-4, but they’ve played some good opponents,” Bolles said. “It’s going to be a challenge. But we need wins in these last two games to finish strong as we head into the playoffs.

“It’s going to be tough going on a 2 1/2 hour bus trip on a Saturday to play an opponent we’ve never played before.”

Another week came and went without a win for either Hart or Shelby, as the Pirates fell to Ravenna 55-8 and Shelby lost to Montague 63-0.

Hart got off to a good start, even taking an early lead, in its game against Ravenna, but the visiting Bulldogs took over from there, winning the game 55-8.

The Pirates (0-4, 0-4 West Michigan Conference) answered an early Ravenna touchdown drive with an impressive drive of their own, led by quarterback Braeden Carskadon. The senior punched in a nine-yard touchdown run and ran in a two-point conversion to give Hart an 8-7 lead.

However, the Bulldogs responded to that with touchdowns on their next four possessions, and Hart couldn’t recover.

Carskadon led the Pirates with 81 yards on the ground and 44 in the air. Hart turned the ball over five times in the game. Ravenna’s Kyle Beebe had 98 rushing yards and 147 passing yards, with six total touchdowns.

Hart coach Eric Anderson, whose team continues to deal with injuries, did point out that Hart was on its way to potentially scoring again after Ravenna had gone up 14-8, before an untimely penalty helped submarine the drive.

“We were marching the ball down the field and got inside the 10, and it was 3rd and 3, and we had a five-yard llegal motion penalty, and that put us back at 3rd and 8,” Anderson said. “We weren’t able to get the first down. Otherwise we’d probably have scored. They end up getting the ball, march down, they scored.”

Even down 21-8, Hart moved the ball again on its next drive, but a fumble stopped that possession, and the Bulldogs handled the rest of the game, helped by six Pirate turnovers.

Although Hart’s season unfortunately looks a lot like past seasons to date, with only 24 points scored, Anderson has been impressed by his team’s toughness and willingness to face down opponents even with a size disadvantage. And although the points haven’t been there, the Pirates have been moving the football fairly well.

Shelby, on the other hand, faced an impossible matchup against Division 6 #1 Montague, and trailed 56-0 at halftime before losing 63-0. The Tigers got very little done offensively and struggled again with turnovers.

“We tried to wrinkle up some blocking assignments and tried to make it to where we could match up physically,” Shelby coach Lorenzo Rodriguez said. “They were able to overcome what we did. There was no way we could match those guys pound for pound as far as physical size.”

The Tigers (0-4, 0-4 West Michigan Conference) managed only 27 total offensive yards, led by 12 from Xavier Wallace on the ground. Shelby fumbled six times, although it recovered them all, and threw two interceptions.

Rodriguez said despite the daunting stats, he tries to focus on positives in order to keep his team working hard, which he says they’re doing.

“We did have a couple of times where we made some nice plays,” Rodriguez said. “I thought we ran the ball decent when we got a hat on a hat. Later in the game, the second quarter, we did some things. You have to find positives. That’s the only way you grow. I thought we were better on the assignments, but you have to execute better on the assignments.”

The annual rivalry clash has been close in the past four seasons. Shelby won last year’s meeting 36-20, and before that Hart won one-possession battles in three consecutive years. This one could go the same way.

Anderson said Shelby’s wing-T offense is tough to defend because it’s not a common one among local schools. That will present a challenge to his Pirates, especially dealing with the injury bug.

“That’s one area we have to improve,” Anderson said of his defense. “When you start going with freshmen and sophomores in those positions, the lack of strength and size can catch up with you on defense. Offensively, you can work around that...to some degree. But defensively, if you lack size and strength, which we do, it’s hard to overcome that.

“I think their offense is unique. You don’t see that very often.”

On Shelby’s side, the focus will be on containing Carskadon, who’s provided the bulk of Hart’s offense to date.

“Braeden Carskadon runs the ball left, right, up the middle,” Rodriguez said. “He’s tough to bring down. He’s playing against quality competition and still getting four or five yards a pop.

“I feel we match up a little better with Hart (than with our other opponents to date),” Rodriguez said. “Speed-wise I think we match up well. We can’t make it bigger than what it is. We have to make sure our kids stay focused and continue on the path.”

“The kids really look forward to this game,” Anderson added. “It’s like the Michigan/Ohio State game in this area. The challenge is getting to the game with the fewest amount of injuries. We have a number of players, not just injured, but out for the season..You hope you have enough horses left to compete.”