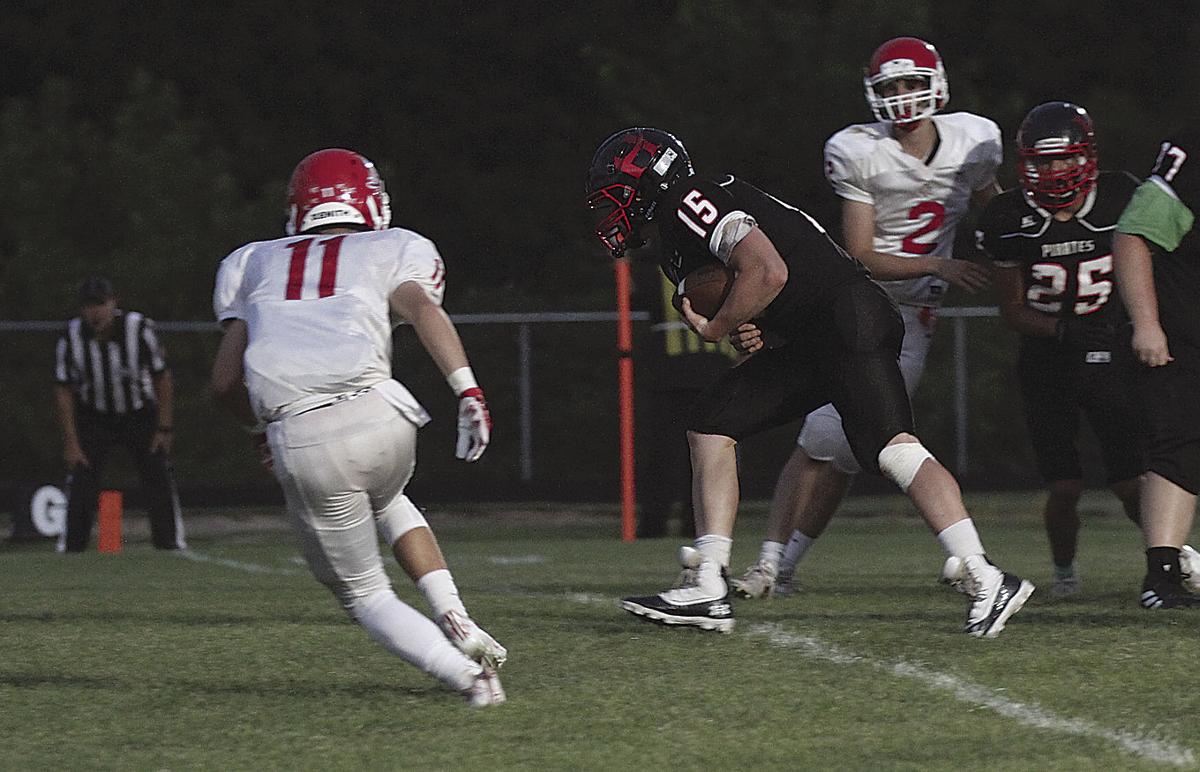 Hart quarterback Kellen Kimes (15) goes in for a touchdown during Thursday’s game against Kent City. Hayden Carlson defends for the Eagles. Hart won, 30-22. 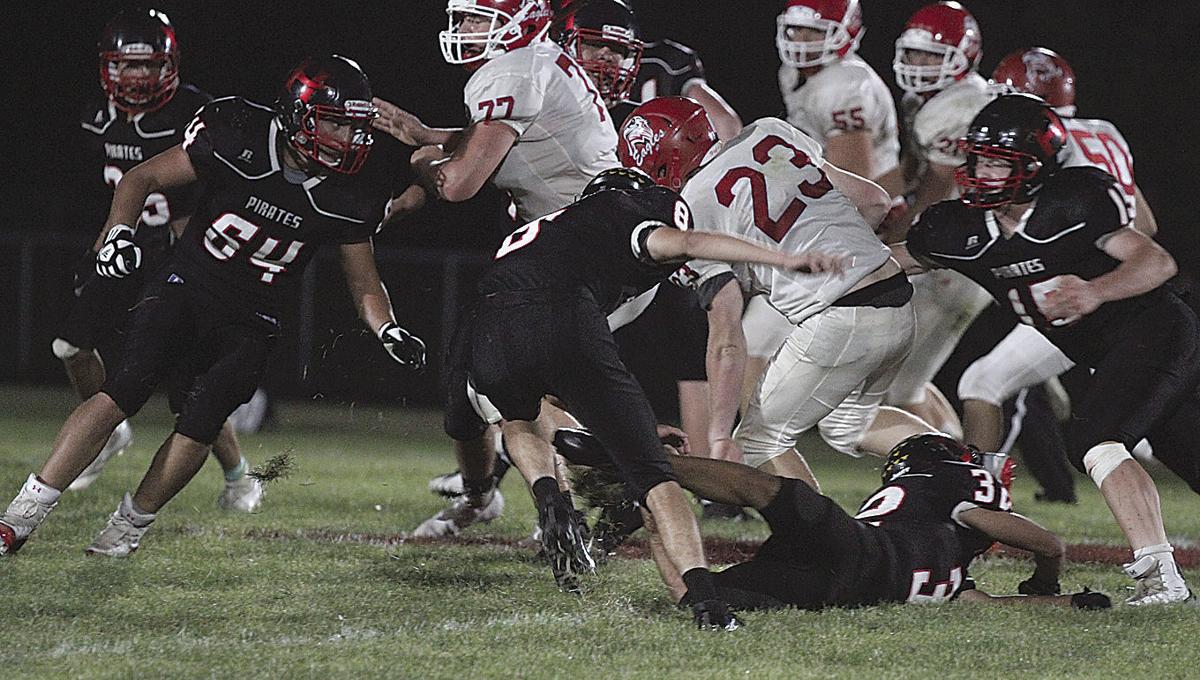 Hart defenders surround a Kent City running back during Thursday’s game at Hart. The Pirates won, 30-22. 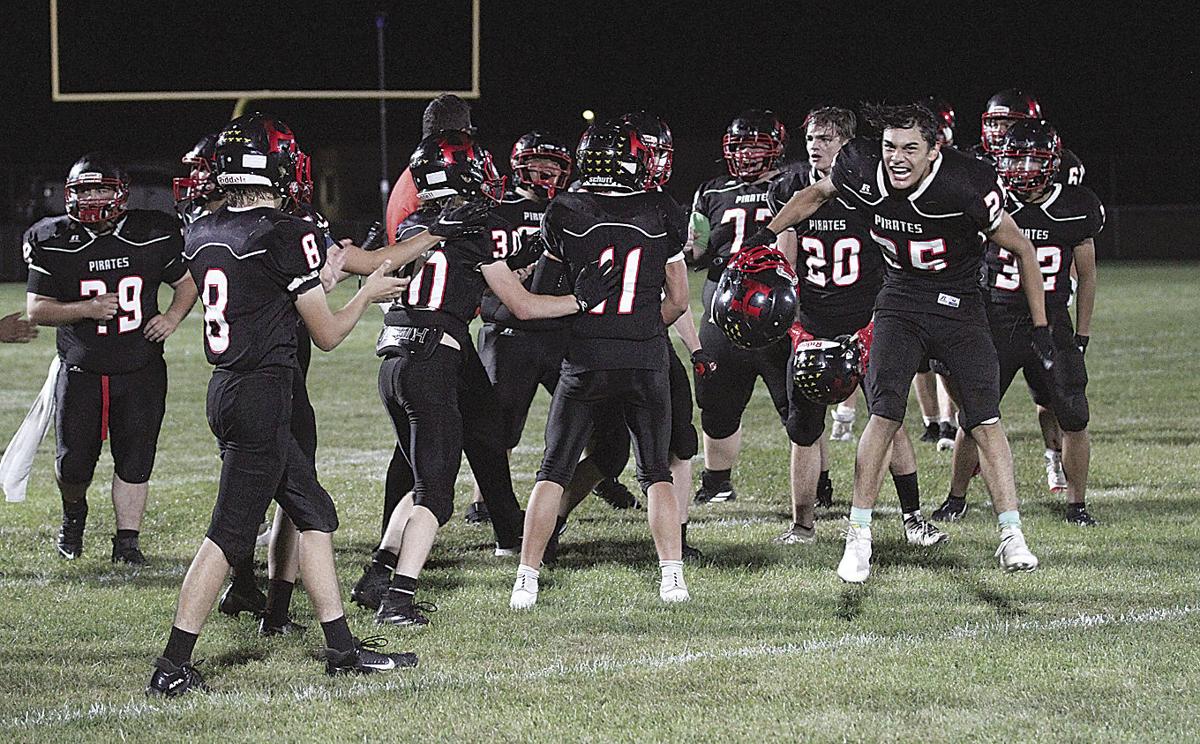 Hart players celebrate after clinching a 30-22 victory over Kent City Thursday night. The win made the Pirates 2-0 for the first time since 2004. 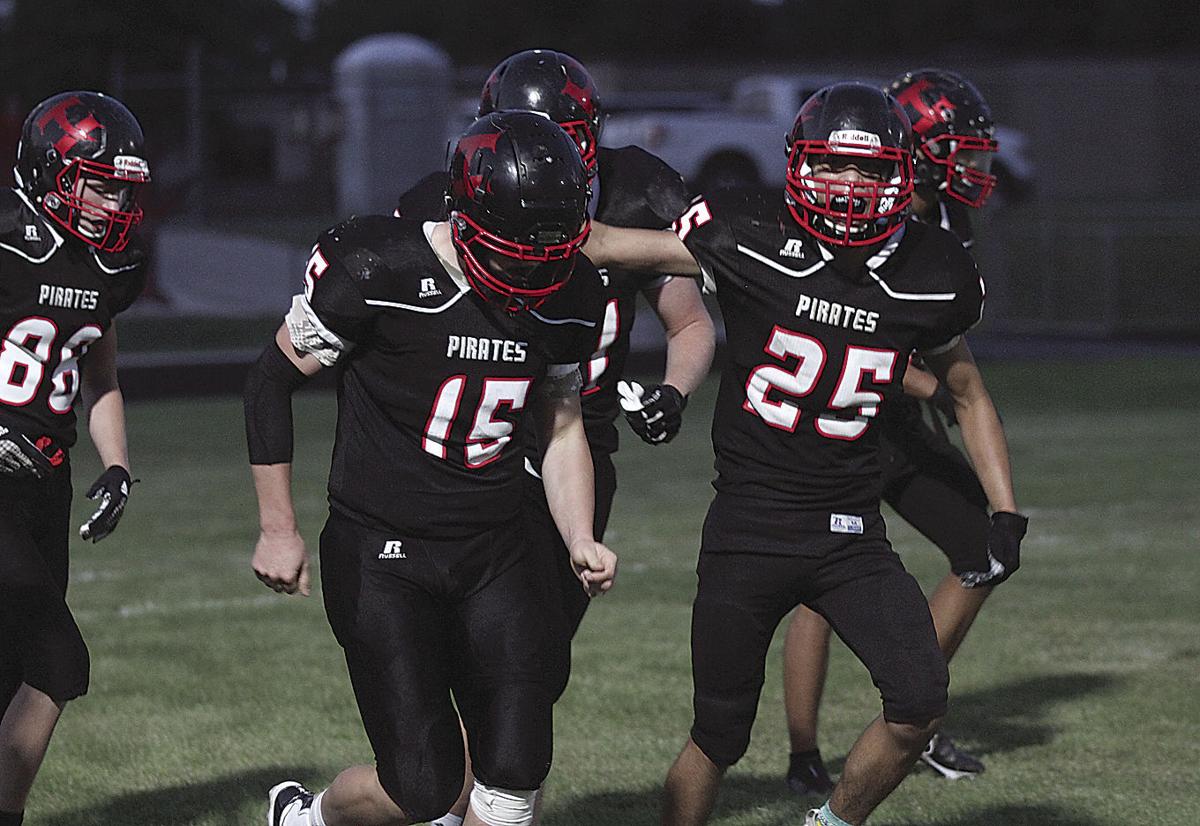 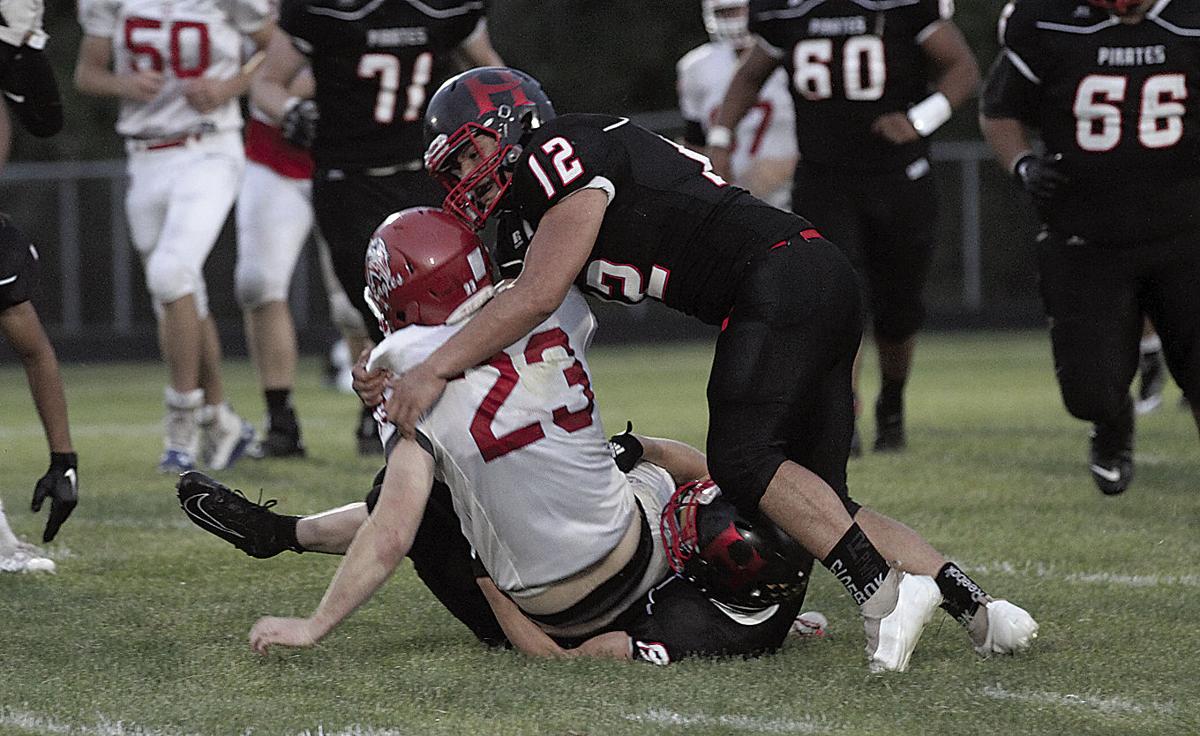 Hart’s Leo Guadarrama (12) wraps up a Kent City ballcarrier during Thursday’s game at Hart. Guadarrama led the Pirates in tackles in a 30-22 win.

Hart quarterback Kellen Kimes (15) goes in for a touchdown during Thursday’s game against Kent City. Hayden Carlson defends for the Eagles. Hart won, 30-22.

Hart defenders surround a Kent City running back during Thursday’s game at Hart. The Pirates won, 30-22.

Hart players celebrate after clinching a 30-22 victory over Kent City Thursday night. The win made the Pirates 2-0 for the first time since 2004.

Hart’s Leo Guadarrama (12) wraps up a Kent City ballcarrier during Thursday’s game at Hart. Guadarrama led the Pirates in tackles in a 30-22 win.

Two weeks into the Oceana County football season, Hart has snatched the headlines as the area’s top team, with Thursday’s upset win over Kent City giving the Pirates their first 2-0 start since 2004.

Hart will face easily its biggest challenge to date in week three as its first road game of the year comes against defending Division 6 state champion Montague, but the Pirates have already made clear that their ambitions are not all talk.

Shelby and Hesperia are both now 0-2 with uphill climbs ahead of them, but each coach is striking an optimistic tone as the season moves to its next act this week.

Hart sent a message across the area Thursday night: These Pirates are different.

Hosting a consistently strong Kent City program, the Pirates dominated the game early on, building a huge lead, before holding on for a 30-22 win. The victory gave Hart its first 2-0 start since 2004.

The Pirates never trailed in the game and led by as much as 30-6 before the Eagles rallied to make it interesting down the stretch.

“We kind of had a focus of three things if we were going to have a chance to win the game,” Hart coach Joe Tanis said. “Taking care of the football, winning the special teams battle and out-toughing them. The third one, they were pretty dang tough, but it was a battle all night. Those are the things that played out the way we talked about.”

The Pirates got many key contributions. Kellen Kimes was responsible for three touchdowns, two in the air and one on the ground, and Trenton Swihart also threw a scoring pass. Chris Clark-Smith, Chance Alvesteffer and Joseluis Andaverde each caught a touchdown. On defense, Leo Guadarrama had 12 tackles and Kimes and Austin Martinez each had 11.

The Hart offense has been a pleasant surprise this season, and the 74 points the Pirates have scored in two games is their most in any two-game span of the same season in a decade; they scored 76 points against Mason County Central and Kingsley in the final two games of 2011.

“I really think we’ve had to make it very simple for our kids, installing it late and all that kind of stuff,” Tanis said. “We’re making it very simple for our guys but making it look like a lot. It’s given us a chance to have some success. We have some really good players, not just one guy. We’re able to spread it around and that’s one of the biggest things for us.”

Tanis said his team consistently won big moments, which was the biggest factor in coming out on top.

“There were so many critical moments in the game,” Tanis said. “It would be hard to pinpoint any (one) thing. When the big moments came, the fourth downs, the two-point conversions that helped us extend the lead, when those plays came up, we made more of them than they did.”

Excitement is at a high for the program right now, but the Pirates’ quest for 3-0 will be even more difficult than the one for 2-0. Hart travels to Montague this week to face a Wildcats’ squad that rebounded strongly from a week one defeat by blanking North Muskegon, 35-0.

Montague will be a tall task, with star running back Dylan Everett off to a terrific start and the Wildcats having looked strong on defense a week ago. Tanis said everyone involved knows what the Pirates are facing this week, but the first two victories have given his players confidence that they can measure up to the challenge.

“We feel like we can compete with anybody at this point,” Tanis said. “That’s not saying we can win every game by any stretch, but we have some good players that are going to fight and are incredibly tough and mentally tough. To be able to turn the corner, we have to do things right, and our kids are doing that right now.”

Hesperia played a solid first half Thursday night at St. Louis, but wasn’t able to convert it into a good second half, as turnovers and miscues doomed the Panthers to a 39-18 loss.

Hesperia (0-2) led 18-14 in the second quarter of the game before the Sharks went ahead with a late touchdown before halftime. In the second half, Hesperia was on its way to taking the lead, having charged into the Sharks’ red zone, when consecutive fumbled snaps sent the Panthers into a third-and-long situation, stunting the drive.

“It was a different game after that,” Hesperia coach David Smith said. “If we could’ve scored there, the outcome might have been different.”

The Sharks dominated from there, scoring 19 unanswered points in the second half.

Brandon Quinn had a big game for Hesperia despite the outcome, rushing for 160 yards and a touchdown on 24 carries. Armando Escobedo had a lengthy scoring run, and Hunter Billman also got in the end zone. Sam Koch led the defense with eight tackles.

The Panthers have a theoretically winnable game on deck in White Cloud. Hesperia has taken 10 of the last 11 in the series. However, the Indians did defeat Shelby in week one and will have the advantage of being rested because they defeated Wyoming Lee by forfeit last week.

Smith said the Panthers need to be focused on themselves this week in practice if they’re to defeat White Cloud for their first win of 2021.

“It’s just fixing our own stuff,” Smith said. “If we take out the bad snaps and miscues, we probably win (last week’s) game. It’s a lot of stuff we have to fix with ourselves.”

Shelby couldn’t get much going or stop an explosive Ravenna offense Thursday night, and the Tigers dropped a 63-6 decision to open West Michigan Conference play.

“Give Ravenna a bunch of credit,” Shelby coach Phil Fortier said. “They were big, fast and aggressive and played a great game. They have some things going on there. We were a little overmatched and that was reflected in the score and how things went.”

The Tigers (0-2, 0-1 WMC) couldn’t string together drives and were held to 112 yards of offense in the game. Travis Boughan threw for 32 yards and ran for 52 to lead the Shelby offense. Cade Clement added 33 yards on the ground. Boughan scored the Tigers’ lone touchdown late in the game after Ravenna had achieved a running clock, although Fortier said his team was on its way in for a score in the final moments of the first half as well and blamed himself for poor clock management on that drive.

“Our guys continued to battle,” Fortier said. “Our guys did not give up. They were overmatched, no question, but I didn’t see us giving up out there.”

The result didn’t faze Fortier’s long-term outlook for Shelby; he said he knew the Tigers couldn’t immediately flip the switch into contention after the last several seasons have been rough for the program.

“We want to make sure we progress as a team,” Fortier said. “The scoreboard’s there and that’s a measuring stick, but it can’t be the only measuring stick for us. We came close to sticking one in before halftime, and we didn’t because of bad clock management on my part, and we stuck one in late. We moved forward as a team today and we saw the character of our kids today.”

The Tigers next get North Muskegon in their home opener. The Norsemen will be smarting after a blowout loss to Montague, but in week one they battled impressively against a powerhouse Muskegon Catholic group before losing 27-13.

North Muskegon often looks to get the ball in Denny Belmonte’s hands; he’s led the team in yards from scrimmage in each of the first two weeks of the season. Bo Nedeau and Ben Meyers both had big defensive games against Montague despite the final outcome — each had 6.5 tackles and picked off a pass — so they will be hoping to be ballhawks again in Friday’s game.