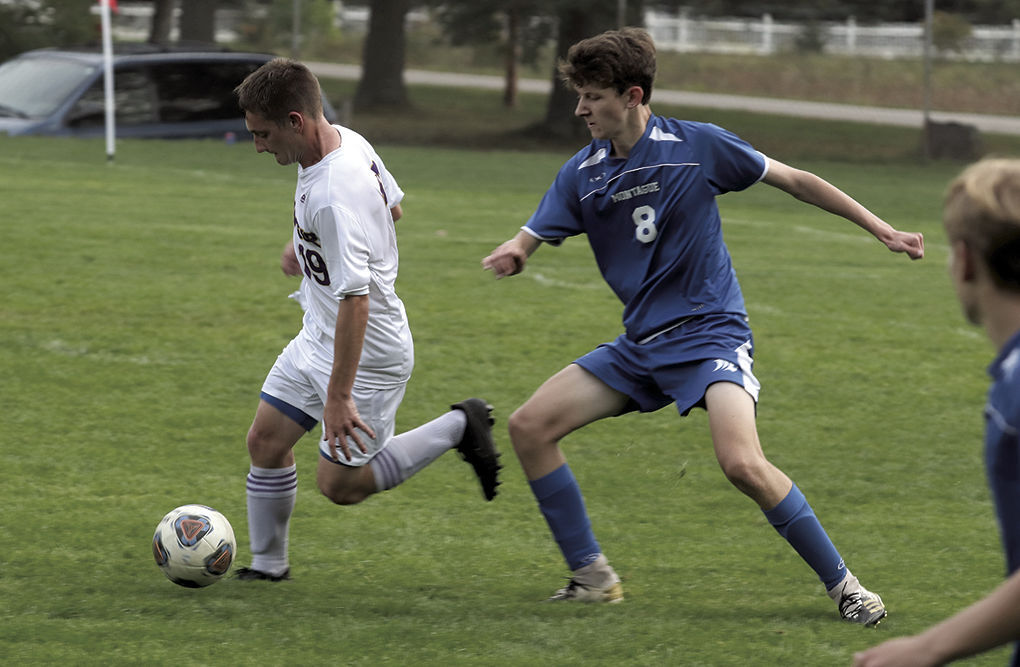 Pentwater’s Lane Rood (19) tries to get free from Montague’s Carter Mahoney during Monday’s game at Montague. The Falcons lost, 4-3. 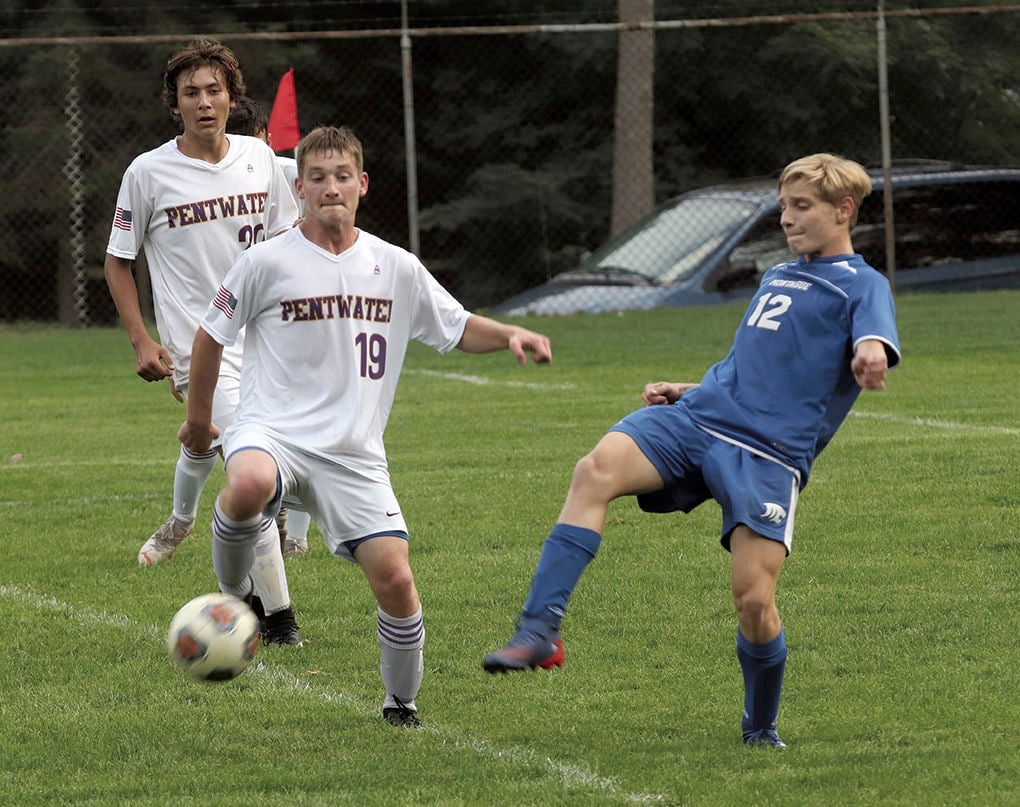 Pentwater’s Lane Rood (19) tries to reel in a loose ball while Montague’s Owen Raeth gets in on the play during Monday’s game at Montague. The Falcons lost, 4-3. 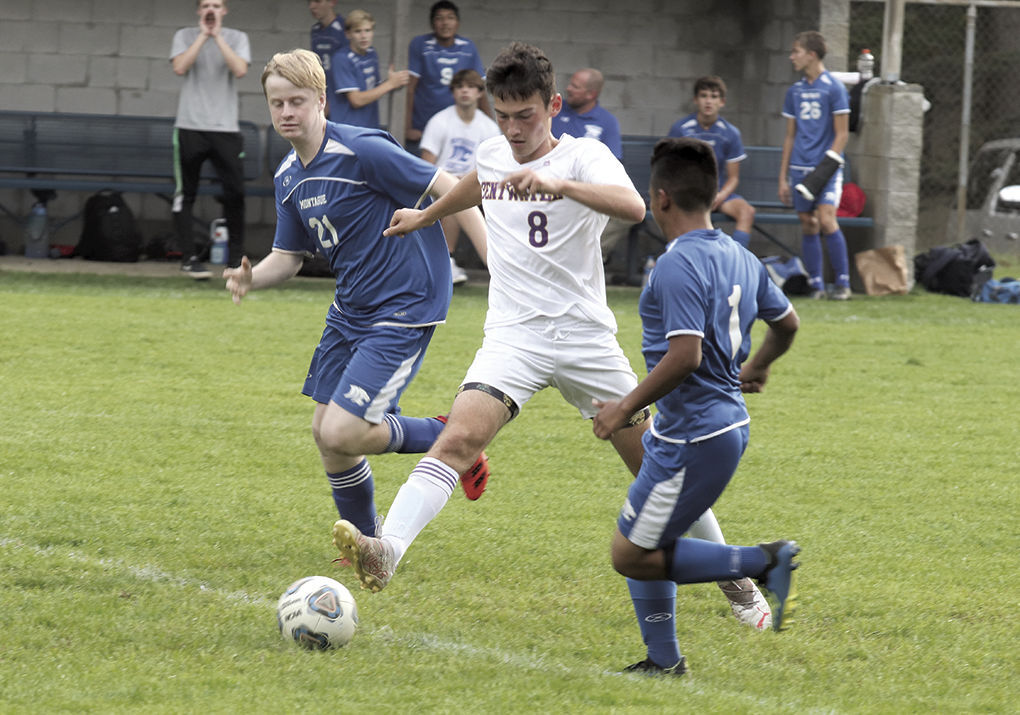 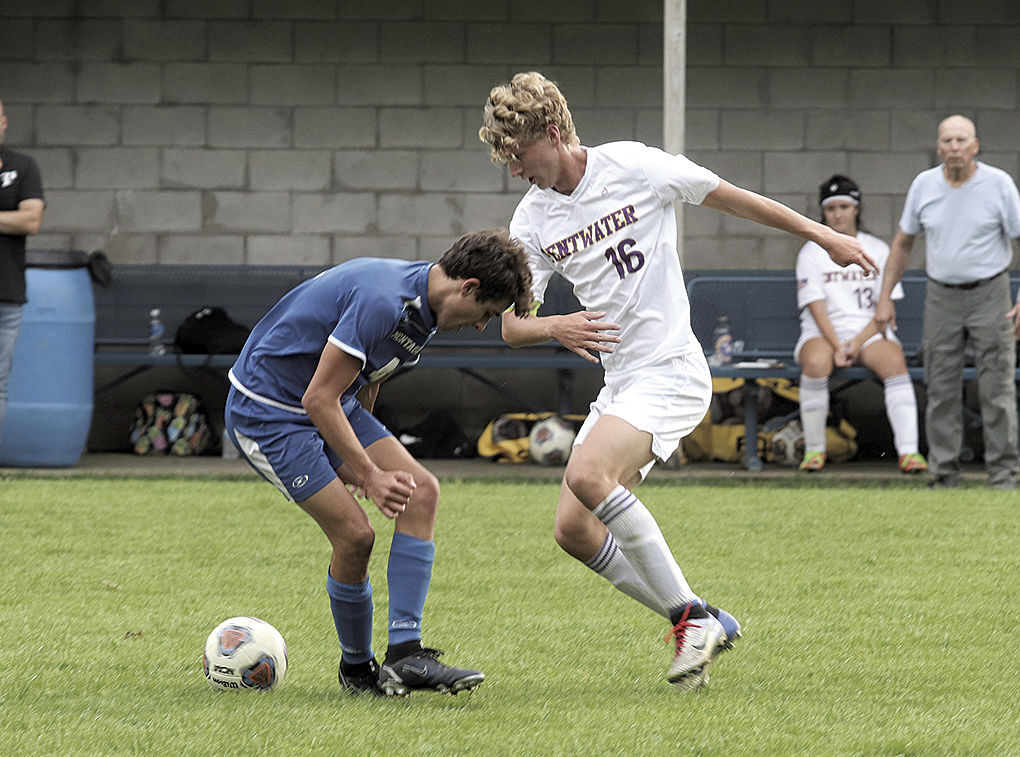 Pentwater’s Lane Rood (19) tries to get free from Montague’s Carter Mahoney during Monday’s game at Montague. The Falcons lost, 4-3.

Pentwater’s Lane Rood (19) tries to reel in a loose ball while Montague’s Owen Raeth gets in on the play during Monday’s game at Montague. The Falcons lost, 4-3.

MONTAGUE — Moral victories don’t count on the ledger, but if they did, Pentwater definitely would’ve earned one for its effort Monday in a 4-3 loss against Montague.

The Falcons (3-5-1), who didn’t hold possession in Montague’s end much throughout the game and almost never in the second half, nevertheless didn’t let up and remained in the game until a long free kick sailed into the Wildcat keeper’s gloves as time ran out.

“There’s no way I ever could’ve predicted this,” Pentwater coach Steve Rossiter said. “I was impressed. We played Orchard View last week and they put it to us. They’re a good team, a Class B school. With our 81 kids in the high school, it’s amazing to come down here to a big school with these programs and compete. It shows you the future is there, the players are there. If we can give a team like this a good run for their money...It’s good for our program, definitely.”

Montague appeared to have things locked up when it scored a rebound goal with 3:33 to go, moving ahead 4-2. However, freshman Will Werkema-Grondsma quickly knifed through the Montague defense for a goal only 13 seconds after the ensuing kickoff to cut the deficit to three once more. It was Werkema-Grondsma’s second goal of the game.

The freshman’s all-out effort throughout the game, and the season, has impressed Rossiter, who noted that Werkema-Grondsma got sick at halftime due to his tireless effort.

“If you could clone him 11 times, you’ve got a state championship team,” Rossiter said. “If you ever talk about a kid giving you 110 percent, that’s Will to a T. He’s 110 percent. He doesn’t get frustrated, he just puts his head down and go, go, go.”

Werkema-Grondsma’s first goal came on a penalty kick after a Montague foul in the box, tying the score at one early on. Tyler Plummer-Eisenlohr found the net on an impressive shot from distance with two minutes left in the half, again knotting the score up at two.

The Falcons will travel to Muskegon Catholic for their pre-district game Thursday, and Rossiter couldn’t have asked for a better chance. Pentwater already knows Catholic from the teams’ matchup earlier this season, a game Pentwater lost 3-2. It was, however, the first varsity game for freshman Falcon keeper Kaleb Brown, and Rossiter said Brown has come a long way since then. It was on display Monday, as Brown repeatedly made tough saves and ably directed traffic near the net.

“He’s kind of a shier kid, and he doesn’t like to talk,” Rossiter said. “But I could hear him, as people are rushing through the line, he’s calling shots, he’s communicating. It was a big day for him. Without his ability back there today, that game is 8-0 and we’re done before the second half starts.

“Obviously they’ve gotten better through the season and I’d like to think we’re there too...I’m excited to get a chance at a district win for Pentwater.”