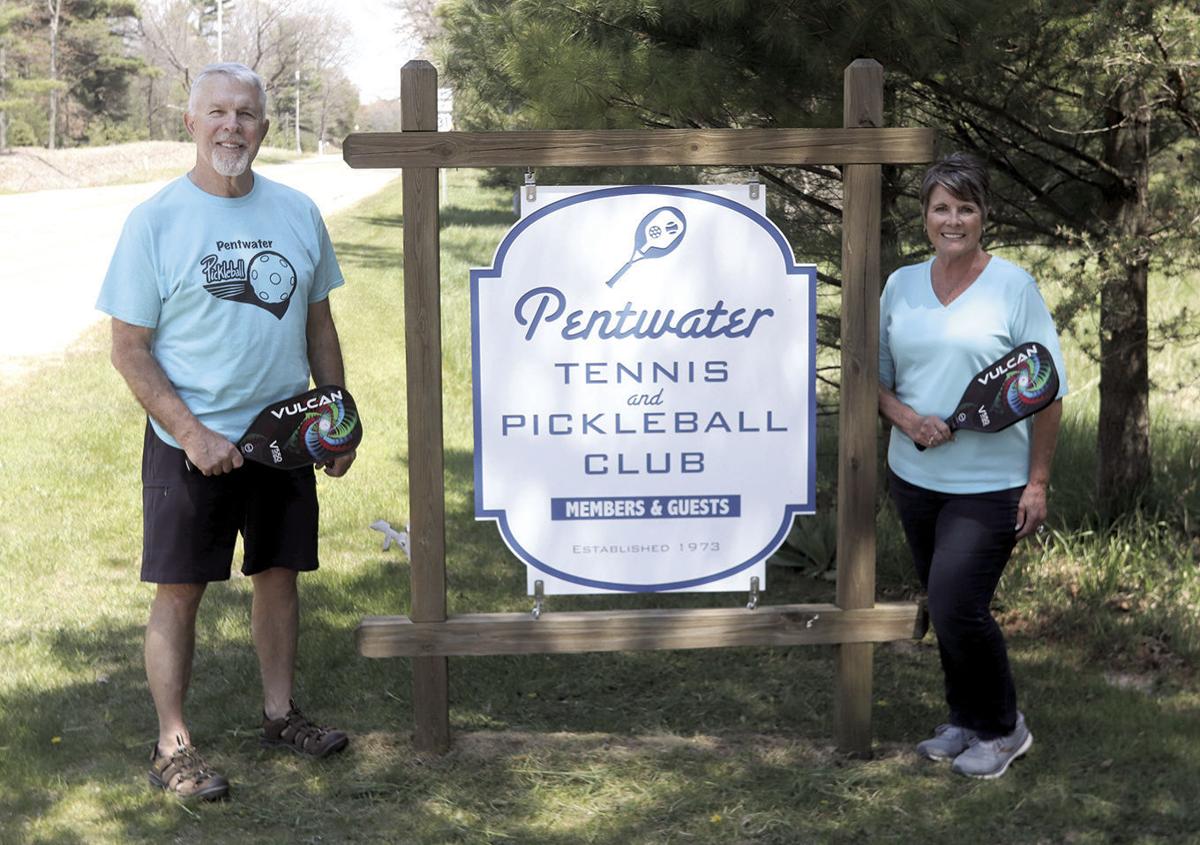 Pentwater Tennis and Pickleball Club members Ron and Jan Gooding pose for a photo next to the new welcome sign for the club. The Goodings were instrumental in the growth of pickleball among members of the club. 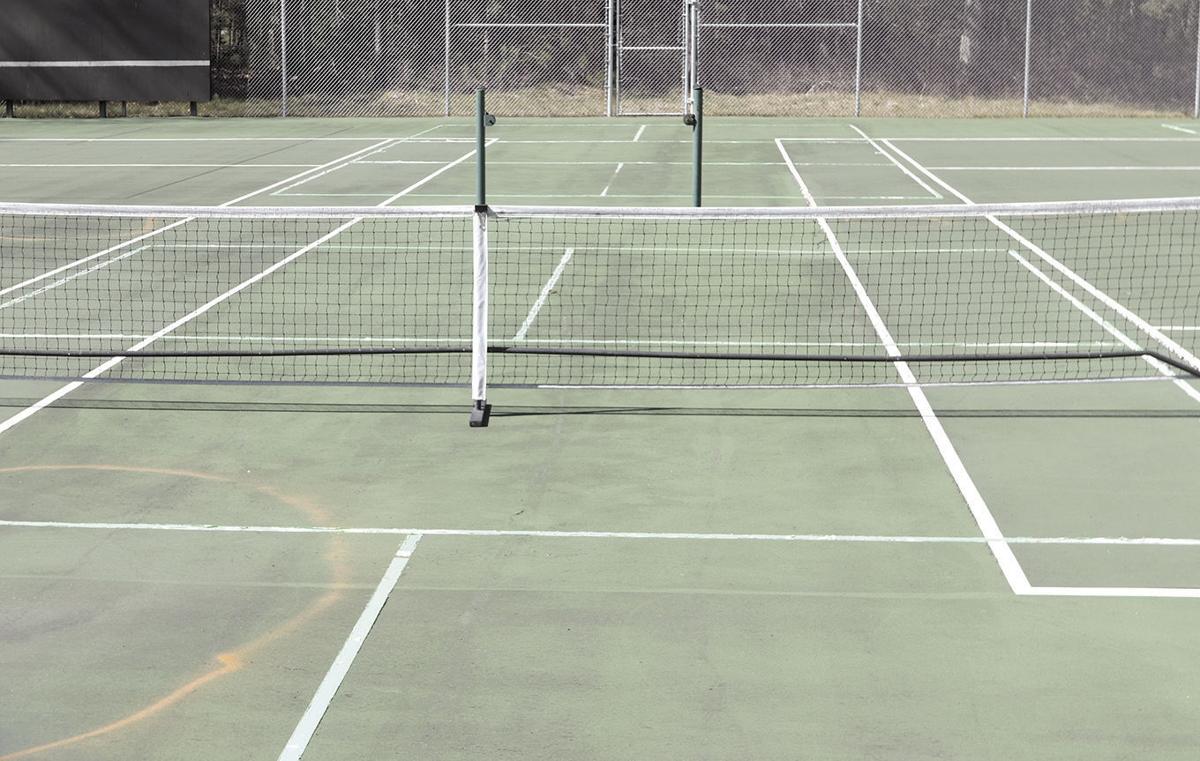 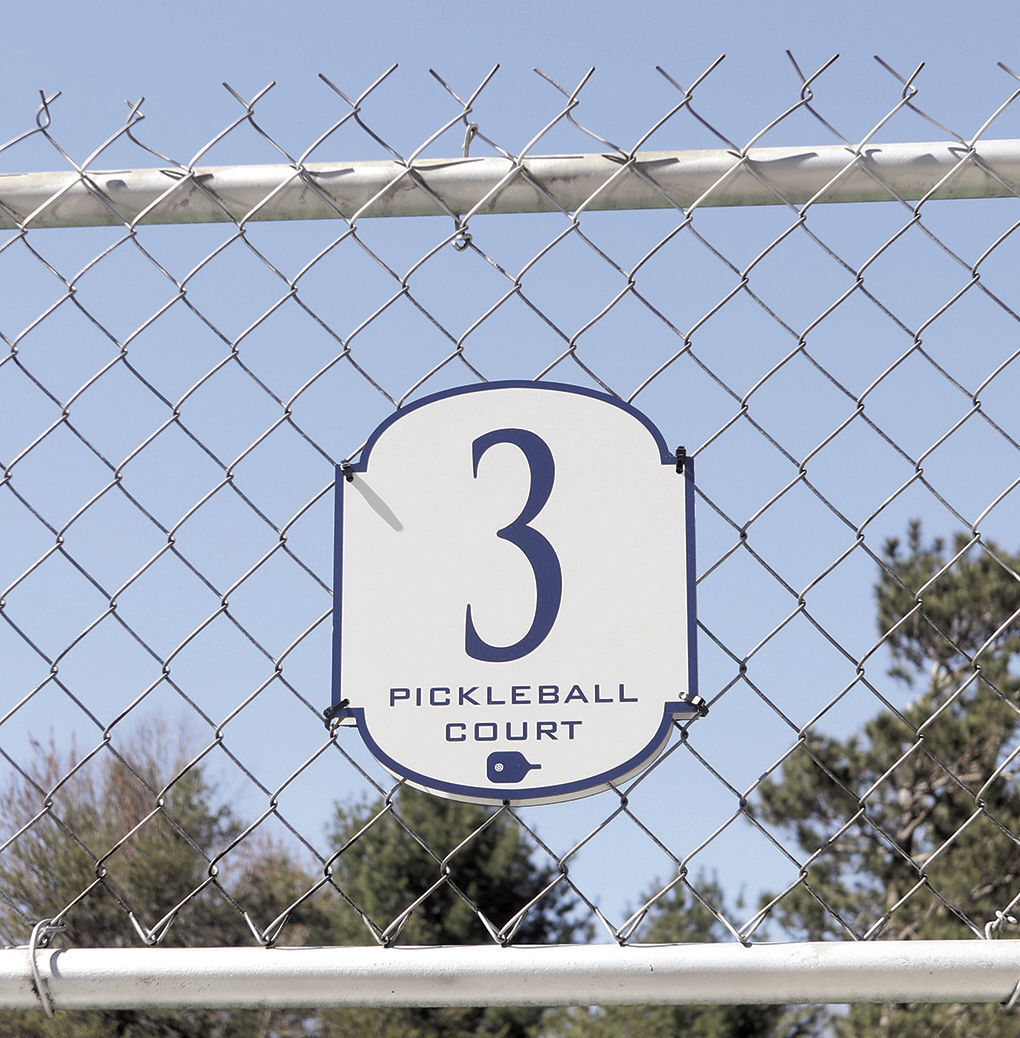 New pickleball courts have been completed at the Pentwater Tennis and Pickleball Club. A few pickleball-specific events are scheduled at the club throughout the summer.

Pentwater Tennis and Pickleball Club members Ron and Jan Gooding pose for a photo next to the new welcome sign for the club. The Goodings were instrumental in the growth of pickleball among members of the club.

New pickleball courts have been completed at the Pentwater Tennis and Pickleball Club. A few pickleball-specific events are scheduled at the club throughout the summer.

As summer-only residents of Pentwater have begun descending on the village over the last month, they may have noticed a sizable change to the Pentwater Tennis Club.

The change comes as a result of the club getting six permanent pickleball courts installed on its grounds, a process that the club’s site says is targeted for completion next Thursday, July 1. Early-May rain delayed the process, which the club had initially hoped would be complete earlier this month.

(A quick aside for those who may still be uninitiated: Pickleball is essentially a miniature version of tennis, played by groups of four on a much smaller court. It’s considered ideal for tennis enthusiasts who may not be able to cover as much ground as they used to, or for players who just prefer a lighter workout or a more casual experience than tennis provides.)

The pickleball courts are the capper to a multi-year process of getting the game enshrined alongside tennis at the club, say PTC members Jan and Ron Gooding. It started in summer of 2017, when the Goodings petitioned the PTC board to add pickleball after being introduced to the game on a vacation to Fort Myers, Fla. earlier that year. Unbeknownst to them, Terry and Mary Franke, longtime PTC members whose uncle Rich was a charter member of the club, had made the same petition.

Some members of the club were somewhat skeptical of the new game, but enough interest was there that the board permitted temporary courts to be installed on two of the tennis courts via tape and portable nets. (An early attempt to chalk a temporary court wound up being fruitless as rain came and wiped out the markings.)

“That first year, we had 12 or 16 players, and we just played mixed doubles,” Jan Gooding said. “It was a lot of fun. Each year, it’s grown. The next year, we added four taped courts, and now we’re going to have six permanent courts, with the divider fencing and permanent nets. It will be beautiful.”

That move wouldn’t have been possible without the growth of interest in the game. There are now over 60 players at the club who play pickleball. At first, the Goodings taught lessons to members who wanted to know how to play — some hadn’t heard of the game until then — and eventually other members were able to join in the teaching rotation. The game got big enough among the club that it led to the official name change last summer to acknowledge pickleball.

“When I saw the enthusiasm among some of our members and the general public for the sport, I realized that our club needed to embrace pickleball and make it part of our playing facilities,” longtime club operator Walt Urick said. “I made comments to that effect at our annual meeting two years ago and believe it helped obtain membership approval to go forward with our pickleball improvement proposals.”

The permanent courts are also the result of support from club members and area businesses. The Goodings proudly report that the club received over $85,000 from members in a fundraising campaign whose goals included the new courts; the first priority was resurfacing two of the tennis courts, which should be completed by the end of the month, but the donations were so sizable that the club was able to move right on to the permanent pickleball courts as well.

In addition, Great Lakes Fencing in Hart donated its time to take down the fencing on the courts to allow for the surfacing, which is being done by Hentco out of Traverse City.

This summer will feature three pickleball tournaments; one, a round-robin event that moved players around between different partners in each match, took place Sunday, June 14; men’s and women’s doubles tournaments are scheduled for July 12; and a mixed doubles event is set for Aug. 7. Also, a pickleball clinic for those interested in learning the game is scheduled for July 12, in the late afternoon following the doubles tournaments.

In addition, the club holds monthly tennis and pickleball socials throughout the summer, on the last Wednesday of each month at 7 p.m. (June 30, July 28 and Aug. 25). Visitors are welcomed to take a look at the new and upgraded facilities.

Expect pickleball to continue to grow, and as it does, the Goodings will face more challenges — including from their own kin.

“We have 13 grandkids and they’re learning to play pickleball,” Jan said. “The older ones are very competitive and their whole goal is to beat Grandma and Grandpa.”