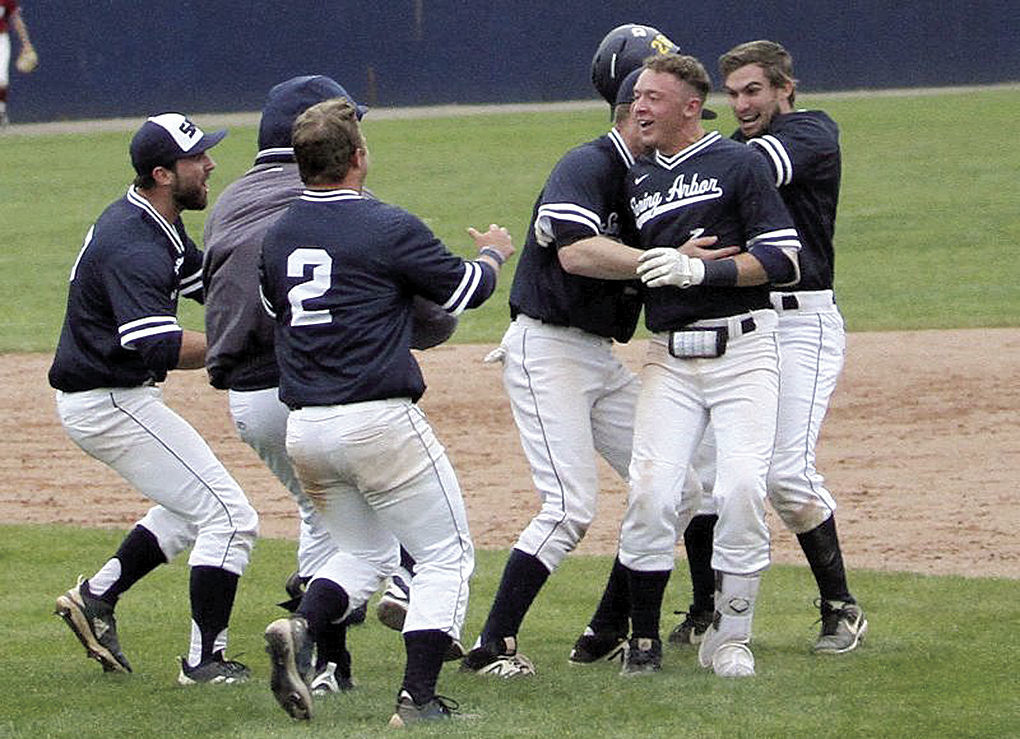 Pentwater High School alum Glenn Miller (second from right) is mobbed by Spring Arbor University teammates after delivering a game-winning hit earlier this season. Miller, who was tabbed as a long-term project at the plate when he first signed, was excelling offensively before COVID-19 ended SAU’s season. 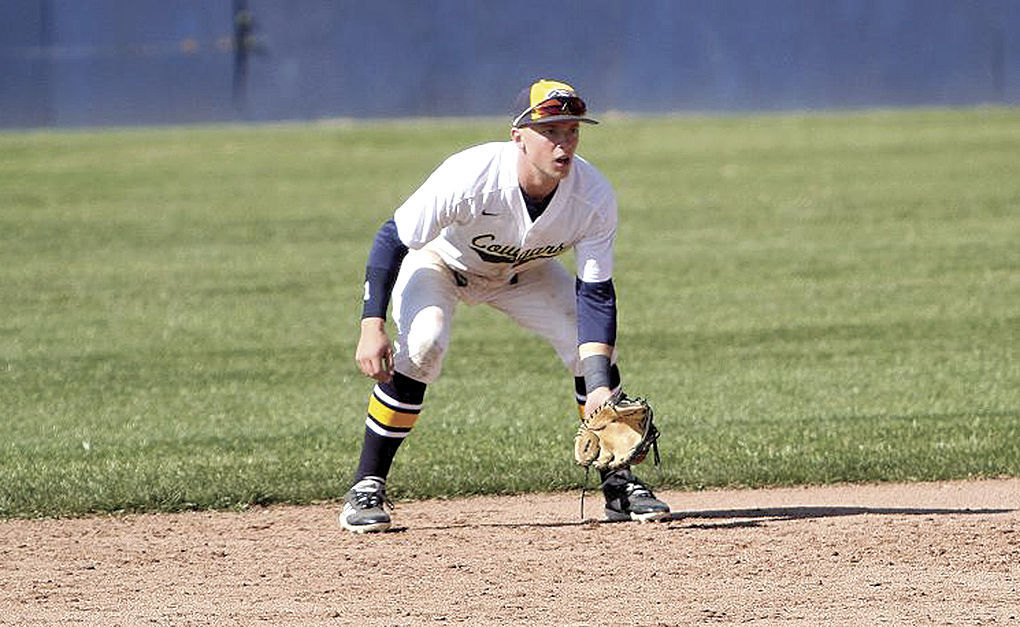 Pentwater High School alum Glenn Miller readies himself at his shortstop position during a Spring Arbor University game earlier this season. Miller was a day-one starter at the position at SAU and has impressed with his work ethic.

Pentwater High School alum Glenn Miller (second from right) is mobbed by Spring Arbor University teammates after delivering a game-winning hit earlier this season. Miller, who was tabbed as a long-term project at the plate when he first signed, was excelling offensively before COVID-19 ended SAU’s season.

Pentwater High School alum Glenn Miller readies himself at his shortstop position during a Spring Arbor University game earlier this season. Miller was a day-one starter at the position at SAU and has impressed with his work ethic.

It’s not often a freshman baseball player impresses on the level Pentwater alum Glenn Miller did in his first year at Spring Arbor University, but he left little doubt in his 18 games to date that he’s a force to be reckoned with.

Miller was brought in, third-year SAU coach Ryan Marken said, as a guy the team expected to be a defensive ace and ultimately would develop into a positive at the plate as well. Instead, Miller quite literally came out swinging as a Cougar, In his first game, a doubleheader that they played last October against Rochester University, Miller had two hits and four RBI. In that twinbill’s nightcap, he ripped a game-winning line shot into the gap for a walk-off hit. In his first spring game, in February against Brescia (Ky.) University, Miller whacked his first career home run.

“In high school, I was always trying to hit a home run, and if anyone’s played baseball, they know that’s not how you’re going to hit a home run,” Miller said. “There were guys at first and second, and my coach told me, ‘Don’t press, and try to hit it in the gap.’ Instead of going into the gap, it went over the wall...That was one thing that helped me chill out, have some confidence and know I was ready to compete at that level.”

By the time the COVID-19 pandemic shut down the Spring Arbor season in March, Miller had shown himself to be a middle-of-the-order threat at the plate, hitting .393 with a .500 on-base percentage in 61 at-bats, with 12 RBI.

His Cougars, meanwhile, had mirrored Miller’s rapid rise. A fairly young team that Marken felt was built for long-term success ripped off victories during the Warner University Invitational in Florida — they won all five games, including a 5-2 upset over #2-ranked St. Thomas — and had drastically moved up its internal timeline for success by the time it was over.

“My expectations (before that trip) were, we’re built to be good this year, but we’re built to win a championship next year or the year after,” Marken said. “By the time we got back from Florida, everything had changed...By the time we got back, you could ask, to a man, our expectations were to win the conference and play in the national tournament, or it wasn’t a successful season.”

Marken, a Cougars’ alum himself who was extremely high on Miller when he signed him last spring, credited him with putting in the work to swiftly improve.

“We knew coming in he’d start at shortstop for us, but we (thought) he’d hit at the bottom of the order and we were just working him along,” Marken said. “That was true through most of the fall. Defensively, he was the best guy out there, and offensively, it was some work. Credit Glenn. By the end of the fall — he has an incredible work rate — he’d figured things out offensively to the degree he was hitting in the three hole.

“(We’re) very surprised by how quick he developed offensively and how successful offensively he was for us that early in his career. I knew it was there, because he’s an incredible athlete, but for him to catch up so quick and be successful this early, it was probably surprising to everyone but Glenn.”

Miller said losing out on the remainder of his first campaign was tough. He said initially the season was suspended for two weeks, but it didn’t take long after that for the bad news of a full cancellation to become official.

While obviously it took work in the cage and at the plate for Miller to quickly morph into a key part of the Cougars’ offense, he said a huge part of his improvement was a refusal to doubt himself.

“At the end of the day, the pitcher is still 60 feet away, and the plate is still 17 inches (wide),” Miller said. “Every time I go to the plate, I know I’m going to get a hit and win the battle. The big thing is self-belief and knowing you can do it.”

If any area of Miller’s game has been a struggle so far, it’s the area he’s considered best at: Defense. He was charged with nine errors in his 18 games playing that challenging shortstop spot. He said he had to shake off some nerves early in his season.

“My coach and I found out I was too caught up in the game being faster than in high school,” Miller said. “I was trying to throw the ball before I fielded it. I just wasn’t taking my time with ground balls, and that led to some errors. I think next year going in, I’ll be able to trust my arms, trust my hands and I won’t have to rush anything.”

Since the cancellation, Miller has kept busy as best he can to stay ready to play. He said he’s received workout plans from the team’s strength coach, has hit off a tee daily at the Pentwater baseball field, and occasionally gets his mom or sister to toss him live baseballs to hit as well.

The team stays in touch, Miller said, and the returning Cougars are optimistic that they can pick up in 2021 where they left off. According to Marken, the team had only four seniors heading into 2020. Each spring sports athlete was given another year of eligibility in response to the season’s cancellation. Two of SAU’s seniors, Marken said, have elected to move on to law school rather than return in 2021, but the other two will be back.

“We’re all pretty optimistic about next year,” Miller said. “The year before I got there, they were (23-29). This year, we brought in a ton of new freshmen and got some junior college transfers, and it just started clicking...I think that was just a glimpse into how we’re going to be the next few years. I’m really anxious to get out on the field with the guys and show that we’re here for the long haul.”

Marken added that the coaching staff was excited about its incoming freshman class for next year as well, and with two returning seniors in the mix as well, that will create enviable depth within the program.

The guy that could bring it all together, though, is Miller. Marken has been so impressed with Miller’s work that he said he and his coaches believe the former Falcon could one day play professionally.

“My personal take on Glenn is that he has the ability to be one of the very few position players we have at our level across the board in the NAIA to play pro baseball,” Marken said. “He’s a plus-plus defender, a plus arm, and he can now swing it. That was the one skill set we weren’t sure about. He’s going to show up next year as a freshman, play shortstop, and hit third. His goal is to win the conference player of the year (award), and that’s a legitimate hope for him, a legitimate goal...He’s an exceptional baseball player with a high ceiling, and he loves to work at it. That separates most guys at this level.”

Some of that work, Miller hopes, will take place this summer. He’s poised to play for the Grand Rapids Brewers of the Great Lakes United Baseball League. While many summer wood-bat leagues around the country have canceled their 2020 seasons, the UBL is shooting to begin play on June 13. Miller said a couple of his Spring Arbor teammates, along with players from Davenport and a few Division I players, are also slated to be on the team.

However the next few months play out, Marken is excited to get Miller back to Spring Arbor and continue his development as a player.

“He’s one of my favorite kids to coach, bar none,” Marken said. “We’ve talked about his work ethic and all that stuff. He’s humble and he’s super hungry. That makes a dangerous combination. I coach my infielders, so I get to work with him every day. The way he approaches his teammates and the game of baseball is second to none....To see the way he attacks every day, it’s inspiring. I love that kid to death.”