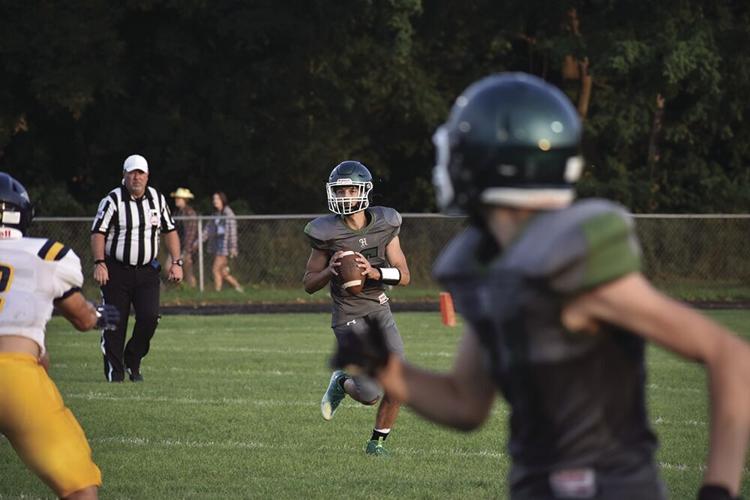 Hesperia’s Alex Gleason rolls out to his right as he eyes potential receivers downfield. Ian Fox (right) looks to get open for his quarterback. 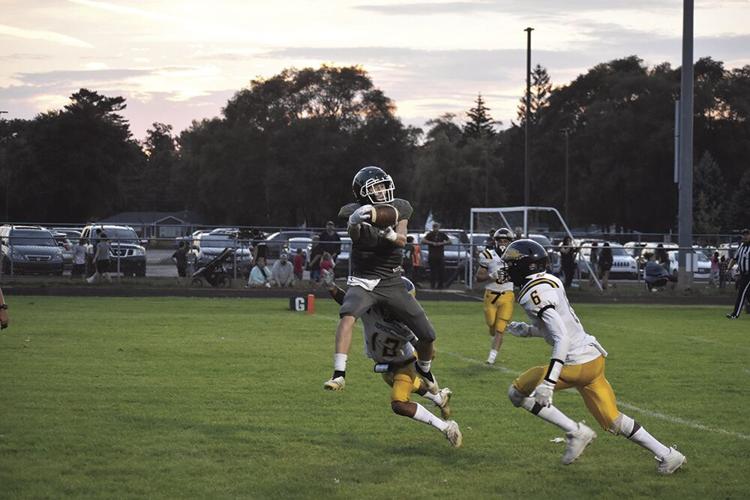 Hesperia's Bryce Billings attempts to haul in a touchdown pass with North Muskegon defenders draped around him. The pass would ultimately fall incomplete after Billings took a big hit in the end zone.

Hesperia’s Alex Gleason rolls out to his right as he eyes potential receivers downfield. Ian Fox (right) looks to get open for his quarterback.

Hesperia's Bryce Billings attempts to haul in a touchdown pass with North Muskegon defenders draped around him. The pass would ultimately fall incomplete after Billings took a big hit in the end zone.

With conference play beginning for a couple of Oceana County football teams last Friday, finding a way to win is becoming more important. Shelby and Hesperia both experienced losses to familiar opponents, while Hart took down Muskegon Heights Academy for their third-straight victory.

Shelby and Hart are in the midst of extended road trips, with each boarding the buses for three consecutive weekends. Hesperia on the other hand, is trying to right the ship during a homecoming matchup.

HESPERIA – The Panthers knew they’d have to play perfect in order to come out on top of North Muskegon, and even that may not have been enough with the Norsemen boasting one of the WMC’s best offenses led by sophomore quarterback James Young.

Hesperia’s defense struggled mightily – as evidenced by a 50-0 loss and 385 yards given up. Orchard View and Mason County Central faced a similar fate when North Muskegon put 350 yards of total offense on the board in weeks one and two.

The night kicked off with fireworks from the Norsemen, as Young (10/10 passing for 311 yards, 5 touchdowns) completed two deep touchdown passes to sophomore receiver TJ Byard (3 catches, 136 yards, 2 touchdowns). The Panthers, now down 15-0, tried to get junior Skyler Stalbaum going on the ground, but instead allowed North Muskegon to recover a fumble and take the ball the other way for points. Hesperia trailed 21-0 just three minutes into the game.

“We had a game plan and a strategy coming in, but we just didn’t do it or bring it to them. I trust my players to be physical and make plays and reads,” Panthers Head Coach Tyler Fehler said. “We’re a little young and inexperienced but I thought we fought hard the entire time. I definitely think it could have been better if we’d have gotten started quicker with some more energy. We got punched in the mouth from the start and we just kind of took it.”

The Panthers were able to find their footing offensively in the second half, as senior quarterback Alex Gleason put the team on his back. Gleason found holes in the defense with his arm and legs, often breaking tackles in a near-herculean effort to find the first down yardage. Unfortunately, that drive would end on a failed fourth down conversion and the Panthers were sent into the locker room, down 40-0.

Gleason has led the Panthers in passing and rushing for the entirety of the 2022 season. His contributions to the team are a large part of what has kept Hesperia in a majority of their games to this point.

“Alex fights hard and he has a lot of heart on top of being a very good athlete,” Fehler said. “We have some inexperience in general, but there’s also a lack of chemistry. We have two freshman starting on our line, two sophomores playing at receiver and even though Alex (Gleason) is a senior, he was at Fremont last year. We want to do our best and send those seniors out the right way.”

Per MHSAA rules, a running clock was implemented in the second half, but that didn’t stop Young and the Norsemen from adding insult to injury. At a time where most teams would insert their backups and opt to run the ball, North Muskegon dialed up the pass game one more time. Young cocked back his arm on the first play of the Norsemen’s second half opening drive and launched a 57-yard touchdown pass to senior Carson Moat (2 catches, 67 yards, 2 touchdowns). While some on the Hesperia sideline were visibly bothered by the call, Fehler wasn’t too concerned.

“I’m coaching my team and we’re doing what we can do, that’s not my call,” Fehler said of the second half touchdown pass. “I don’t care if the score is 150-0, if we don’t want them doing that, than we’d better stop them. That team has playoffs coming up I’m sure and they have to get better too and get as many reps as they can, that’s how I look at it.”

The Panthers (1-3) look ahead to their Homecoming matchup with Shelby (0-4) on Friday, a team that has had struggles of their own, and is in the midst of some positional changes. Fehler knows playing a winless team can often be a trap, but he won’t be so quick to write off the Tigers.

“That’s the worst part about coaching, is you look on film and think you have a perfect gameplan to beat a team by 30. I’m not taking anything for granted, we know every team is going to come out and play tough,” Fehler said. “They (Shelby) have coaches and players putting in the same amount of time we are. It’s as simple as finding out who on our side is going to come out and play harder.”

Shelby traveled to Ravenna on Friday night, searching for a win against the Bulldogs. Instead, they were sent home with a 56-13 loss and an 0-4 start to the year.

Junior quarterback Lalo Garcia earned his first start of the year, after taking over in the second half for senior Travis Boughan in last week’s loss to Hart. Garcia (6/16 for 83 yards) produced a mixed bag performance, which is to be expected from a guy who likely hasn’t spent much time with the starting offense to this point. Garcia’s largest struggle was giving the ball away to Ravenna, as he threw 3 interceptions.

Garcia found most of his success on the ground (17 carries, 59 yards, 2 touchdowns), but Boughan was the one who was relied on as the Tigers’ new leader in the backfield. Boughan (13 carries, 68 yards) was moved to running back by Head Coach Phil Fortier last week and he made the most of it against the Bulldogs.

Dual-threat quarterbacks continue to hurt Shelby’s defense, as Ravenna’s Chase Hogan (9/10 passing for 232 yards, 3 touchdowns; 8 carries, 173 yards and 4 rushing touchdowns) lit up the scoreboard to the tune of seven total touchdowns. Boughan (4 tackles) and Treyjin Waller (5 tackles) led the Tigers on that side of the ball. Junior Ben Cederquist also pulled an interception.

Shelby will now look to play spoiler to Hesperia’s Homecoming festivities as they travel east to take on the Panthers.

The Pirates are coming off a historic week of football for the program, taking down Muskegon Heights Academy in convincing fashion, 36-14.

Hart (3-1) now has won three straight games since losing their home-opener to Fremont. The win marks the first time the Pirates have started the year with a 3-1 record since 2004, which also happens to be the last time a Hart team eclipsed three wins in a season.

Swihart was extremely efficient through the air (5/6 passing for 100 yards, 2 touchdowns), connecting on touchdown passes with both Hertzler (3 catches, 35 yards) and Revin Gale (2 catches, 38 yards).

Defensively, the Pirates were effective getting after the quarterback. Martinez (5 tackles) was able to sack the Muskegon Heights quarterback twice while Tice, Zane Thomas and Blake Weirich were able to record one sack each. Hart was also able to take the ball away from their opponent, as Thomas was credited with a fumble recovery and Edwards hauled in an interception.

Hart will hit the road for the second time in as many weeks, taking on undefeated North Muskegon. As Hesperia found out this week, the Norsemen are no joke with James Young at quarterback as the sophomore has already surpassed 1,000 passing yards and 16 touchdowns.

The key for the Pirates will be shutting down the opposing offense and the best way to do so is to keep running the ball, effectively chewing away time that the Norsemen could use to hurt them.