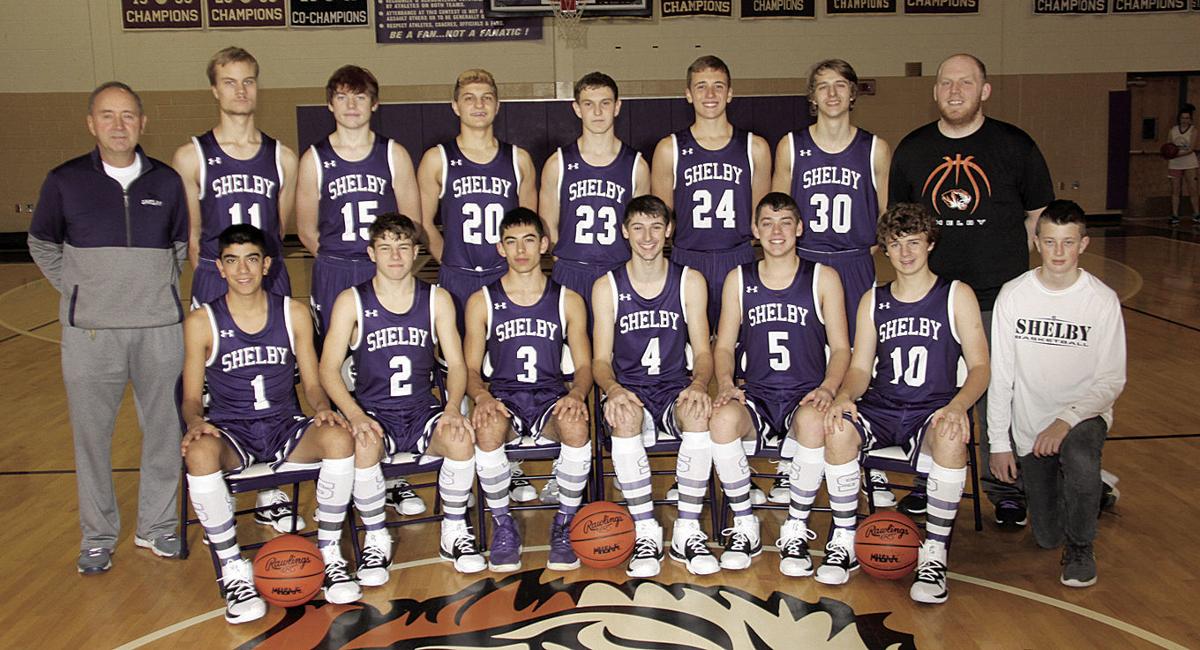 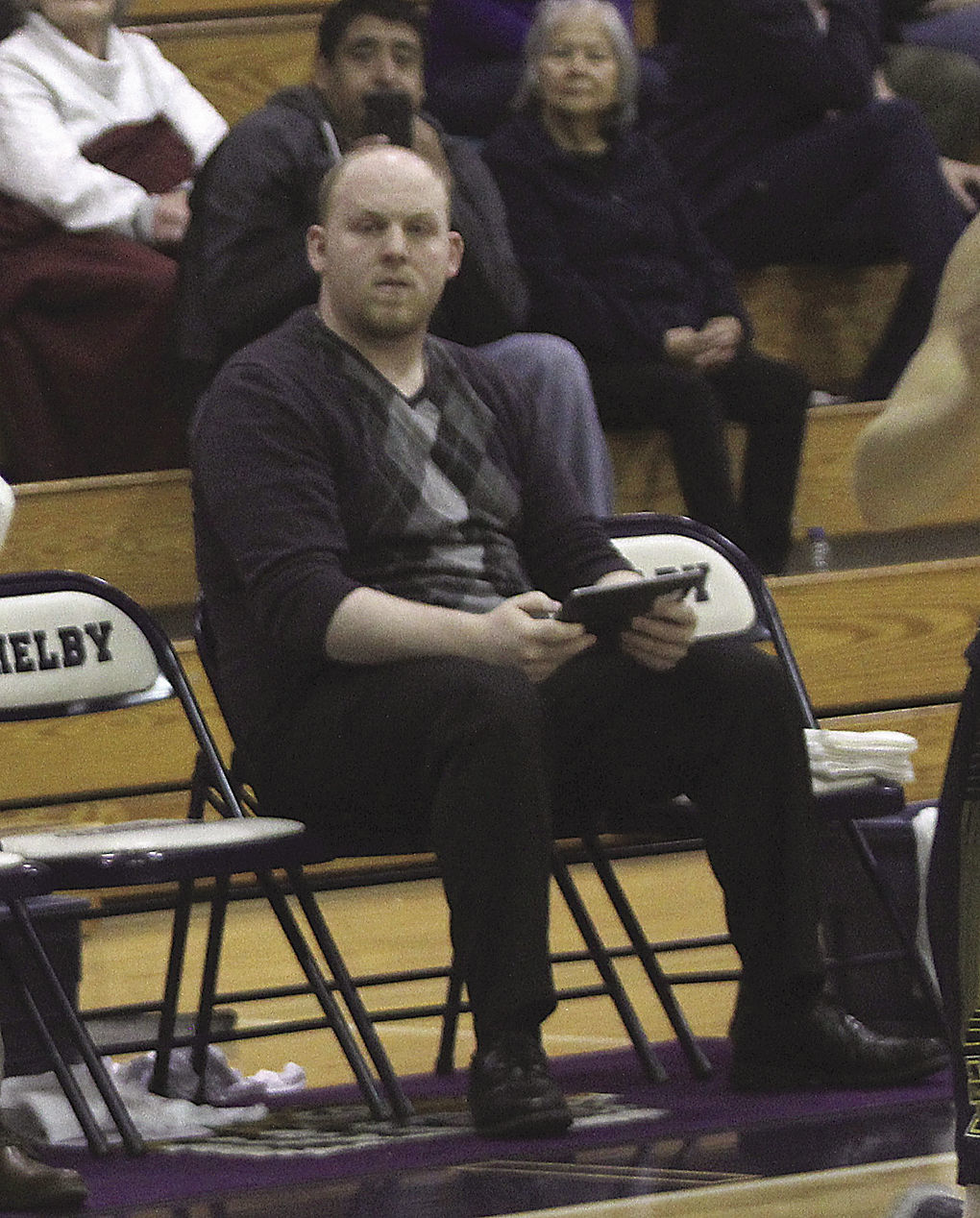 Shelby assistant coach James Dowty holds a tablet while watching the action during a game against Manistee in January 2019. Dowty performs lots of tasks in his work as assistant coach. 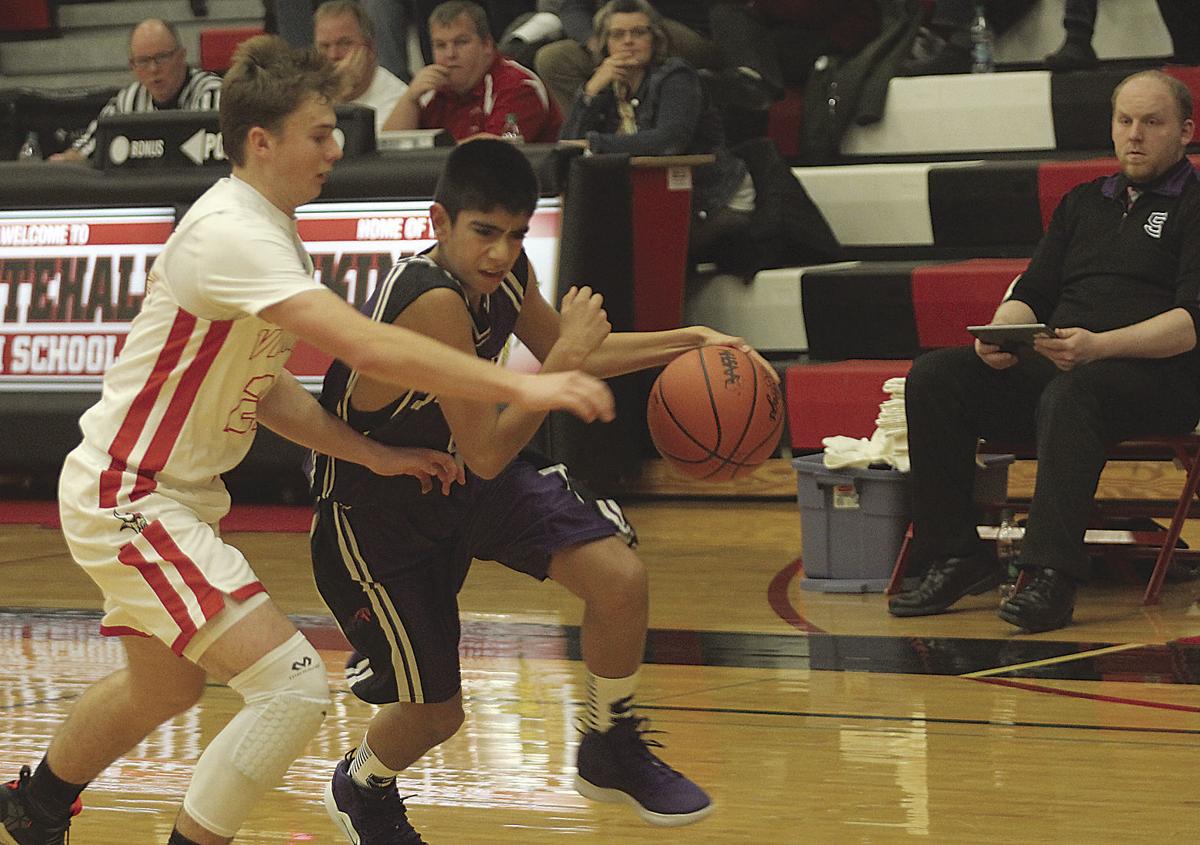 Shelby assistant coach James Dowty (far right) keeps an eye on the action during a game against Whitehall in December 2018. Dowty's contributions have been plentiful during his eight seasons working with the Tigers.

Shelby assistant coach James Dowty holds a tablet while watching the action during a game against Manistee in January 2019. Dowty performs lots of tasks in his work as assistant coach.

Shelby assistant coach James Dowty (far right) keeps an eye on the action during a game against Whitehall in December 2018. Dowty's contributions have been plentiful during his eight seasons working with the Tigers.

One of those assistants is James Dowty, who assists Rick Zoulek for the boys basketball team at Shelby. Dowty has been working on a volunteer basis for the Shelby program for eight seasons.

“He does just about anything that needs to be done,” Zoulek said of Dowty. “He makes sure camera people have things set up, that we have uniforms ready, that players before the game have their stuff ready. Just a lot of things that need to get done that if he didn’t do it, someone else would have to. He’s really caught on to what we need to have done. It really allows me to concentrate on game days and practices.”

Dowty joined the Shelby program not long after his playing career came to an end. After playing for the freshman team his first year in high school, Dowty was unable to make the cut for the JV team the following year. However, anyone who didn’t make the team was welcomed to be a manager if they chose, and Dowty wanted to remain part of the program.

“I just enjoyed it,” Dowty said. “I wanted to keep playing but I wasn’t good enough. I gravitated more towards basketball than anything else during school.”

Dowty remained a manager the rest of his time at Shelby, and after attending college at Ferris State for two years, returned to Shelby just in time to rejoin the program as an assistant by request.

That request, though, hadn’t come from an expected source. It came from Danny Beckman — not when he was poised to become a varsity player, but when Beckman was in elementary school. He knew Dowty well and wanted to be coached by him when his turn came.

Dowty kept his word and joined the Tigers’ staff for the 2012-13 season, with the program fresh off an appearance in the state semifinals and Danny a freshman on the JV squad. Danny’s brother Jason was one of the Tiger stars on that first team, which advanced to the regional finals.

Despite being an unpaid volunteer, Dowty has continued to return year after year, well after Danny graduated in 2016.

Dowty’s presence is extremely valuable to Zoulek. Unlike some larger schools, Shelby doesn’t have budget money for a paid assistant coach, so the work of volunteers like Dowty makes life much easier on Zoulek than it would otherwise be.

“We have to have people like James,” Zoulek said. “And it makes a huge difference. From a head coach’s standpoint, it makes things so much better. If I have to do a pregame interview with the radio guys or something like that, he’ll make sure the uniforms are ready and all the pregame stuff is done and ready to go. He just loves being around the kids and around the program. It’s a win-win situation.”

Shelby has enjoyed remarkable stability in this respect over the years. In all Zoulek’s seasons coaching boys basketball — and, back when it was a fall sport, girls basketball — he said he has had only three JV coaches: Brian Wright, who currently coaches varsity baseball; Chuck Persenaire, the Shelby athletic director, who has coached both the JV boys and girls; and current Tigers’ JV coach Kyle Klotz.

In that time, there have been several volunteer assistants as well. Zoulek said he hopes “I haven’t forgotten somebody” and listed Donnie Anderson, Gordon VanderSlice and James Kurdziel as past assistants who have had an impact.

“I’ve had some great, loyal people that put in time and are willing to help with kids,” Zoulek said. “That’s the key, is I have people that want to be around the kids. It keeps things consistent.”

It could be intimidating for a young coach to work with Zoulek, who has led the Tigers so many years and with so much success. However, Zoulek said he welcomes input from his assistants; it also helps that, Dowty said, he grew up down the street from Zoulek and already knew him pretty well before becoming an assistant coach.

“I probably met him in the late 1990s, so I’ve probably known him 20 years,” Dowty said. “I’ll tell him something, and he values my opinion. If he doesn’t agree he’ll let me know, and if he does, he’ll try to put that into what he does.”

Dowty’s contributions aren’t limited to giving the occasional opinion. Armed with a copy of the practice schedule each day, Dowty is able to keep things on track if Zoulek gets honed in on a particular item and it’s time to move to the next part of a practice.

“He knows what we’re doing next and can help us jump into it,” Zoulek said. “If I don’t do something for a while, he might suggest, ‘Coach, we should do this drill’. It helps the program and helps the kids. It’s an extra set of ears. If I’m talking to a referee or another kid, (someone with a question) can go talk to the other coach.

“I’m not the guy with all the answers. I’m just the guy that sits on the bench and makes decisions.”

In-game communication is also a big plus of Dowty’s presence. He can check in with a player after he’s subbed out of a game to explain why, if necessary, while Zoulek keeps his attention trained on the action. He can provide some quick words of encouragement that can keep a player engaged in a game if things are going poorly.

Dowty has also done a lot of work over the years with the Tiger post players; he explained that in many practices, guards and forwards work separately on their different skill sets. In his first few years in the role, Dowty worked with former stars like Michael James and Jeff Beckman, and he said he continues to pass on things he picked up from those two to the current generation of Shelby forwards.

Being a volunteer with a day job at Dollar General in Shelby, Dowty isn’t always able to be at every single practice or event. However, Zoulek marvels at how much time Dowty is able to put in.

“It’s not their job. but it’s amazing how much time they do put into it,” Zoulek said. “It’s exciting to see the growth in kids, and it’s exciting to see the wins they have. Little victories, like making a shot you’ve been working on in practice. It’s something that’s awesome to be part of. Developing the camaraderie and developing the chemistry in the team; it’s a lot of enjoyment.

“It’s a lot of hard work, but the bottom line is we still have fun doing it, or else you wouldn’t come out and play or coach. I think they get the same things out of it that I get out of it.”

While the Tigers have had some on-court struggles in recent years after the final Beckman boys graduated, Dowty said in some ways he’s learned more about coaching in that time than he did during the seasons that ended with long postseason runs.

“You can see their passion and wanting to win, and I try to bring that out of them as much as possible,” Dowty said of the recent crop of Tiger teams. “Even though we might not be, quote-unquote, as talented as the top teams, if we focus on offense and defense, I think we (have shown we) can beat anyone the past few years.”

Struggles to win games can sometimes demoralize a team into working less hard, but the past few years have yielded, if anything, the opposite problem, from Dowty’s point of view. He said the Tigers practice so hard and so well that he finds himself hoping to see that level of work in the games.

“They always compete hard in practice, and that’s what I love,” Dowty said. “I wish they’d play as hard in games as in practice sometimes. If we can get that concentration from practice into games, it would be a whole different story in games for us.”

The Tigers’ season was cut short in March by the COVID-19 pandemic, with their scheduled district championship game against Pine River one of many casualties of the MHSAA shutdown. Dowty said he’s looking forward to returning to action next season.

“Getting back with them and seeing the camaraderie between the players, that’s really all I want,” Dowty said.

Zoulek said that the assistants he’s worked with over the years, most recently Dowty, deserve a good deal of credit for Shelby’s successes.

“We wouldn’t have had the success we’ve had without the assistants and JV coaches I have,” Zoulek said. “It’s a good working relationship I have with them.”