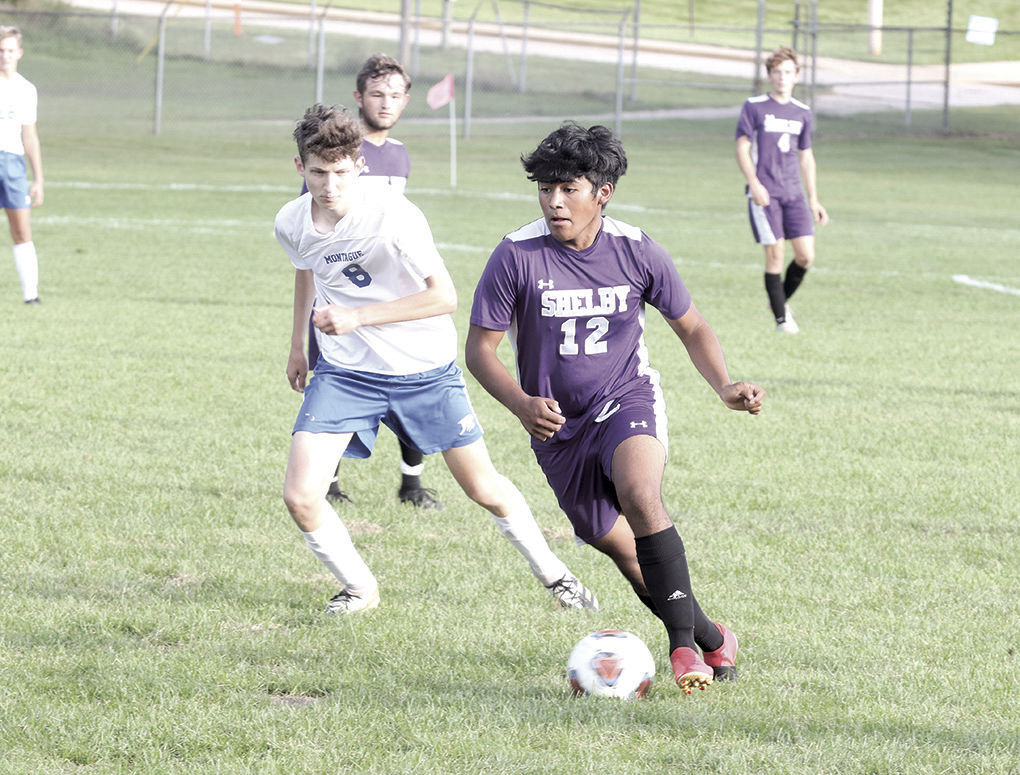 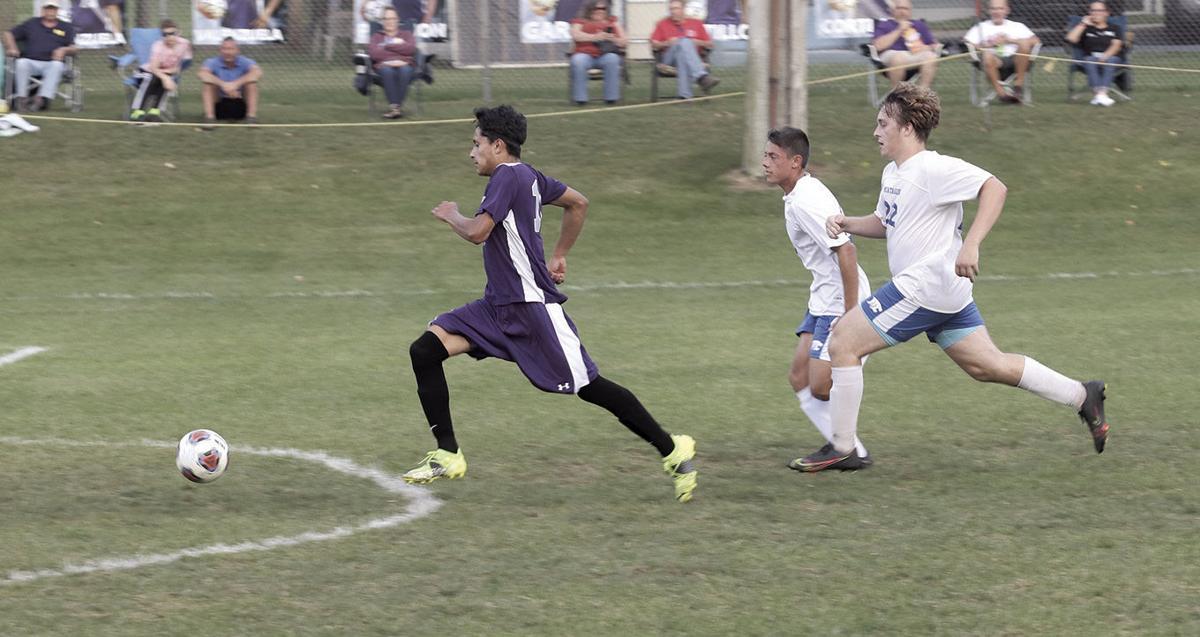 Shelby’s Ricardo Bahena (left) closes in on the goal while a pair of Montague defenders try to chase him down during Monday’s WMC game at Shelby. Bahena scored a goal in his team’s 3-0 win. 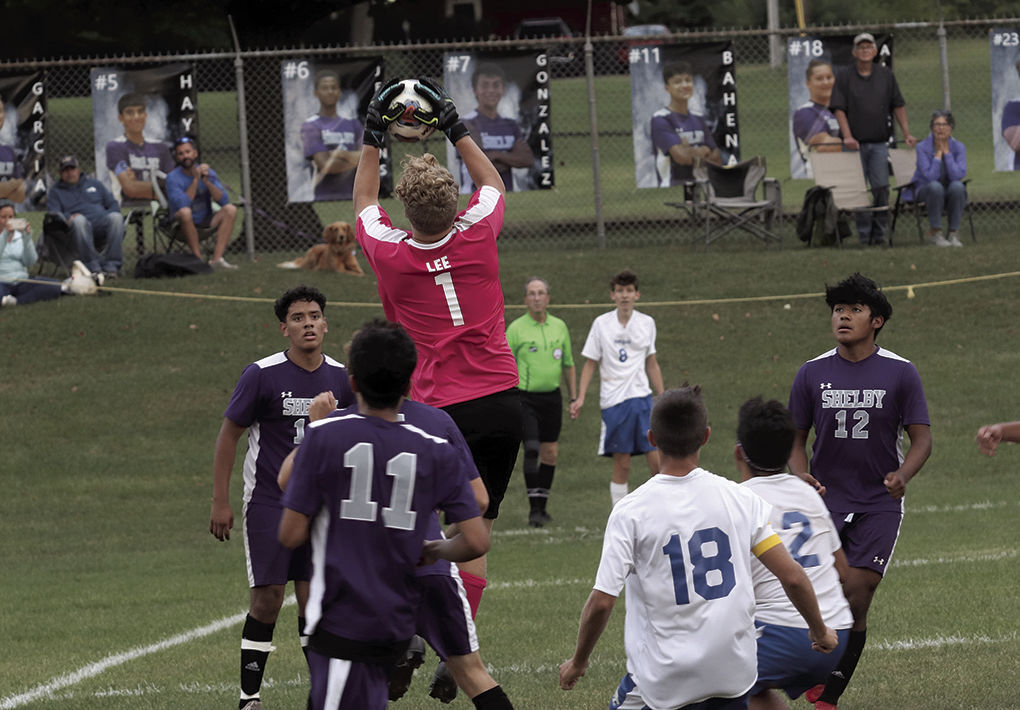 Shelby keeper Bishop Lee (1) leaps to pull in a Montague corner kick attempt during Monday’s WMC game at Shelby. Lee made two pivotal saves early in the second half of Shelby’s 3-0 win.

Shelby’s Ricardo Bahena (left) closes in on the goal while a pair of Montague defenders try to chase him down during Monday’s WMC game at Shelby. Bahena scored a goal in his team’s 3-0 win.

Shelby keeper Bishop Lee (1) leaps to pull in a Montague corner kick attempt during Monday’s WMC game at Shelby. Lee made two pivotal saves early in the second half of Shelby’s 3-0 win.

SHELBY — Shelby took another important step toward its season goal of a West Michigan Conference title Monday, blanking Montague 3-0 in a close battle.

The teams were scoreless at the half, and Montague had a great scoring chance early in the second half on two different long shots. However, Tigers’ keeper Bishop Lee managed to deflect both shots, and soon after, teammate Ryan Jenkins opened the scoring with a great shot on an assist from Miguel Guerra.

“It was a very nice shot by one of the Montague players, and he was able to get it,” Shelby coach Jairo Coronado said, noting that Lee had some key saves in the team’s 1-0 win over Oakridge last week as well. “It would’ve changed the entire game. I’m so thankful for him. It was a very nice save. He kept driving, whenever we needed it.”

From there, Shelby (7-2-1, 3-0 WMC) kept up the pressure, and six minutes later it scored again, this time on a great solo run by Ricardo Bahena, who beat a Montague defender to a spot and fired a shot past the Wildcat keeper.

The Tigers added a third goal on a shot from the edge of the box by Mason Garcia with 5:54 to go.

The team spoke after the scoreless first half about how vital winning the game was to its WMC championship goal. The Tigers haven’t won an outright WMC title, Lee said, since 2000 (they shared the title with North Muskegon in 2016).

“I told them at halftime, we needed the win,” Coronado said. “We want everything to depend on us. We don’t want to depend on anyone else.”

Shelby was without one of its offensive threats, Harrison Jenkins, for the game. Jenkins was near the Tiger sideline and watched the game, and Coronado said he’s expected back for Wednesday’s game against Ravenna.

“Our team doesn’t depend on one player, but he’s a very good player and it’ll be nice to have him,” Coronado said. “That’s why I love this team. They have good chemistry, very good communication. They know if we make a mistake we’re going to fix it as a team.”

Lee, who played defense alongside teammates Carson Claeys and Mauricio Castillo, among others, last season, said their on-field chemistry made it easier for him to make the transition to the keeper spot. The Tigers have proven to be just as effective on defense this year as they were in their district championship season of 2020.

“We’re talking, letting us know who’s on, if they have time and stuff like that,” Lee, who is vocal on the field, said of his team’s on-field communication. “Me, Carson and Mauricio, we all played defense last year. We work together really well, so that helped us move forward this year.”

Coronado said Lee’s play has been integral to the team’s success.

“Bishop is just a phenomenal goalie,” Coronado said. “He has experience from last year and in the summer...He had a very good season and played very well. We fixed what we needed to fix, and now he’s more comfortable with the ball. He can just dive everywhere.

“There are some times our defense cannot do everything, and he’s there for us on those nice long shots. He kept us in the game for sure...He blocked those shots. He’s a phenomenal goalkeeper. I hope colleges are looking at him because he’s college-ready.”

Following Ravenna Wednesday, the Tigers will host WMC powerhouse North Muskegon next week in a game that could serve as a de facto conference title game depending on other results leading up to it.

However, Coronado said after the team’s win over Whitehall that “every conference game will be a final for us,” and the Tigers will surely not take Ravenna, which tied North Muskegon last week, lightly.