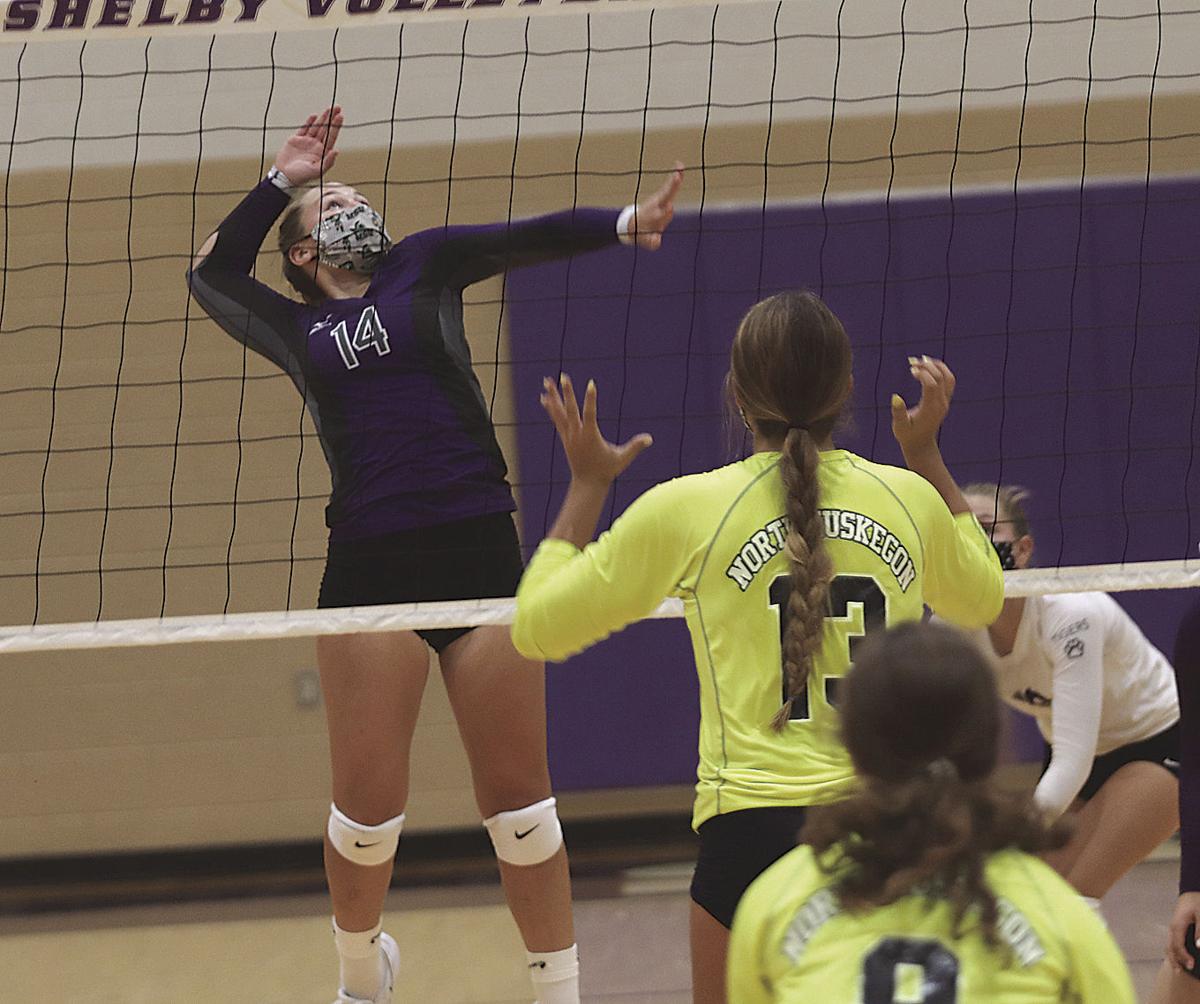 Shelby’s Kendall Zoulek (left) rises up for an attack against North Muskegon’s Syann Fairfield during a September WMC match at Shelby. Zoulek picked up all-WMC honors this fall. 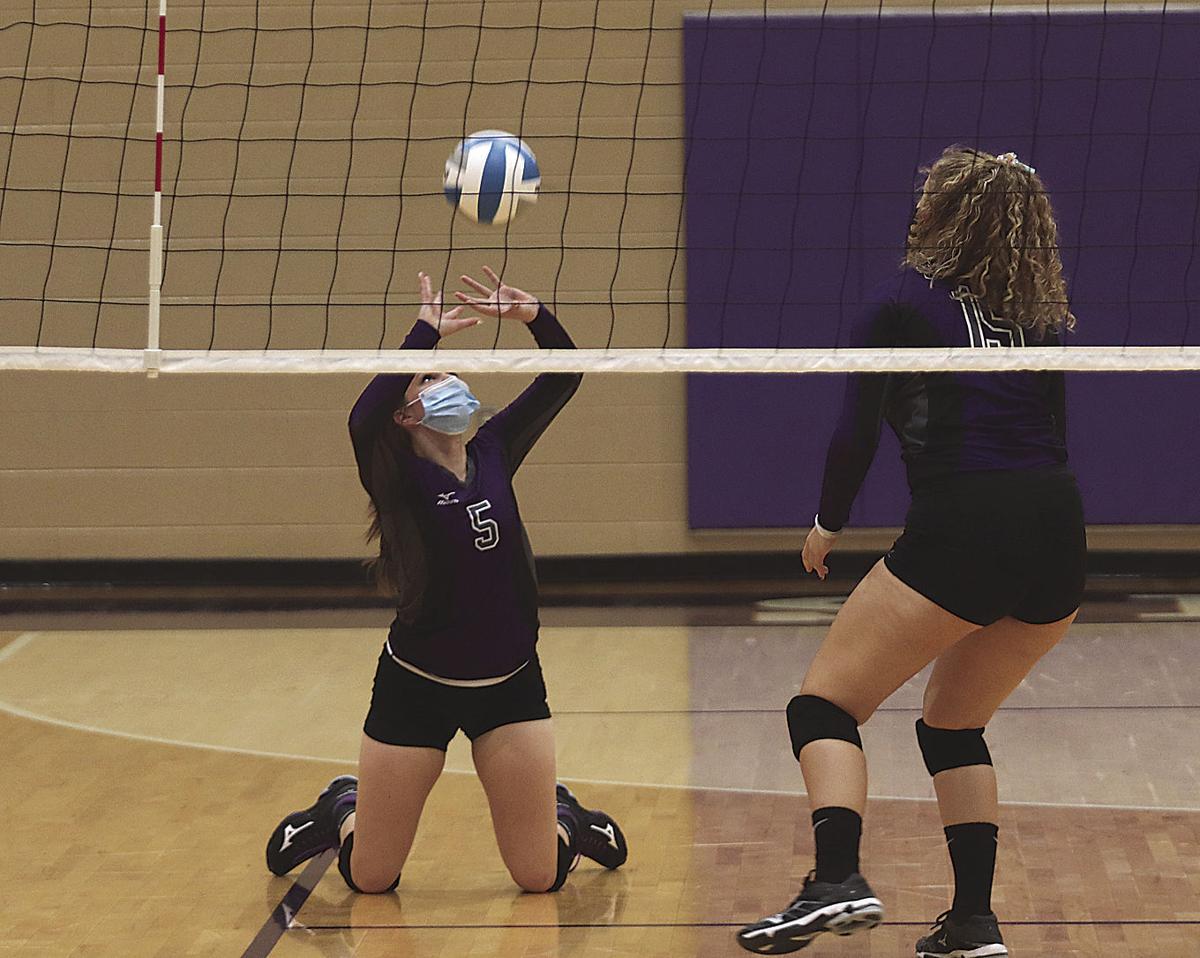 Shelby’s Daphne Clark (5) goes to the floor to save a ball while teammate Courtney Brown looks on during the Tigers’ match against North Muskegon Tuesday. Shelby lost, 3-0. 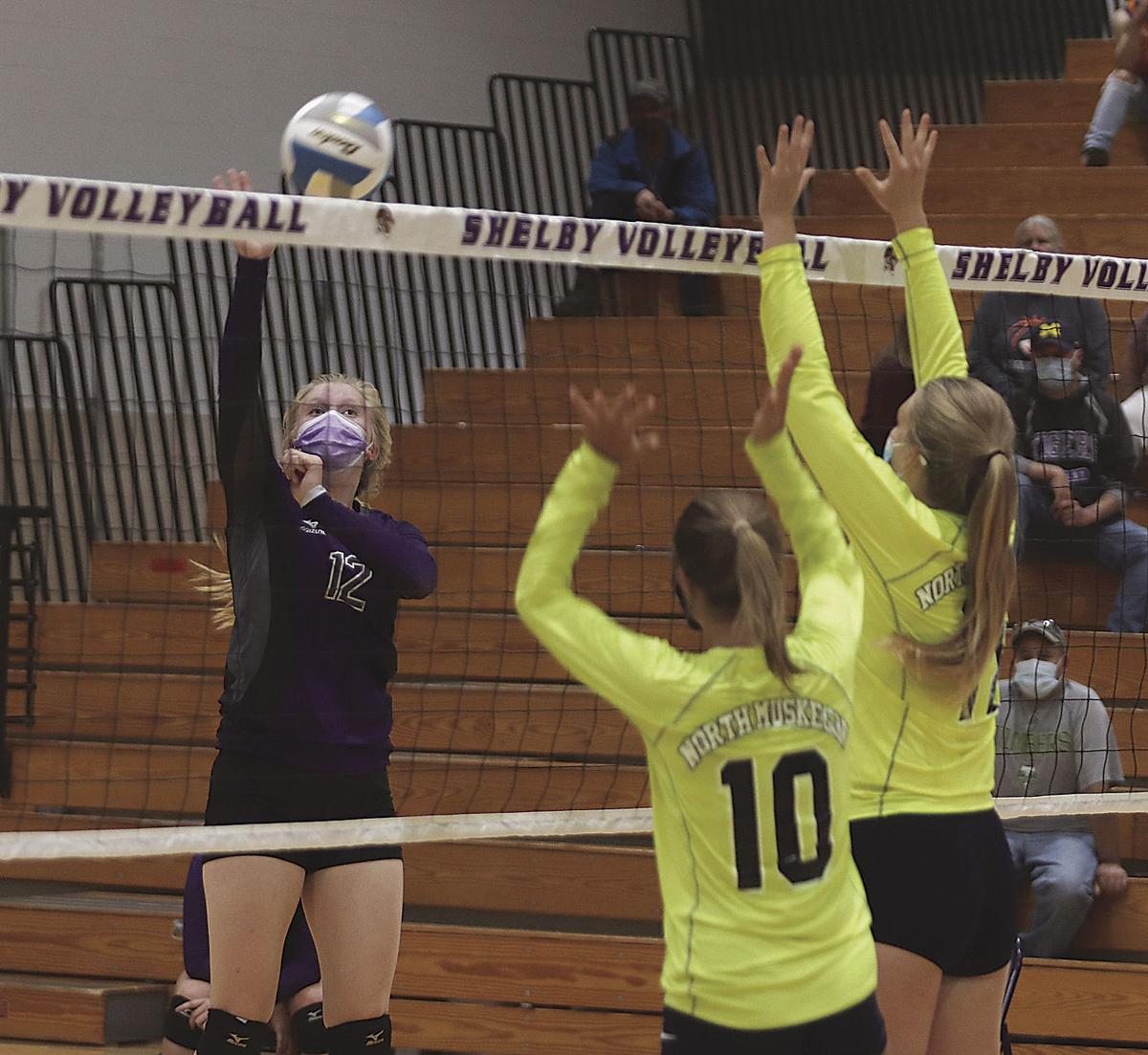 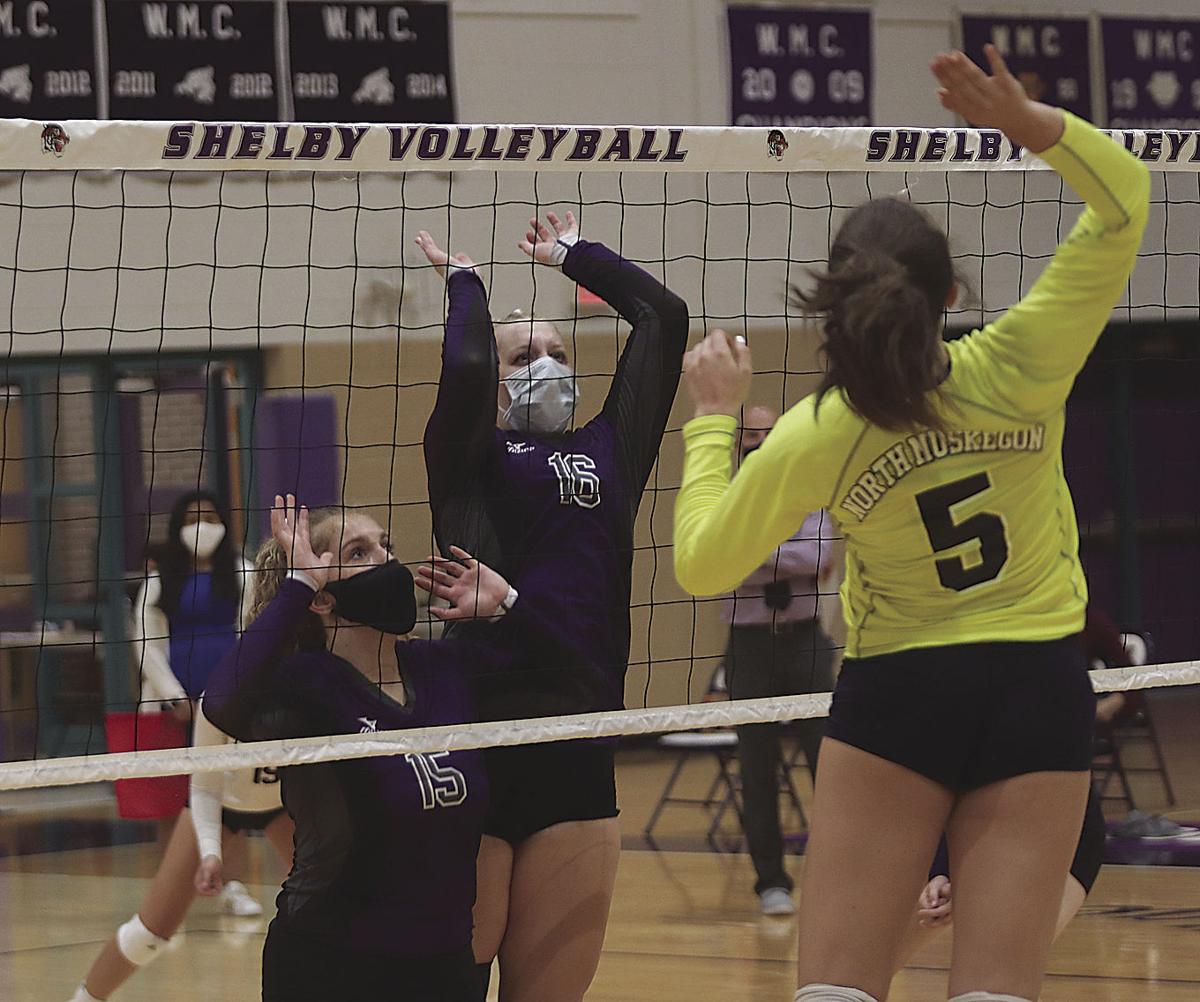 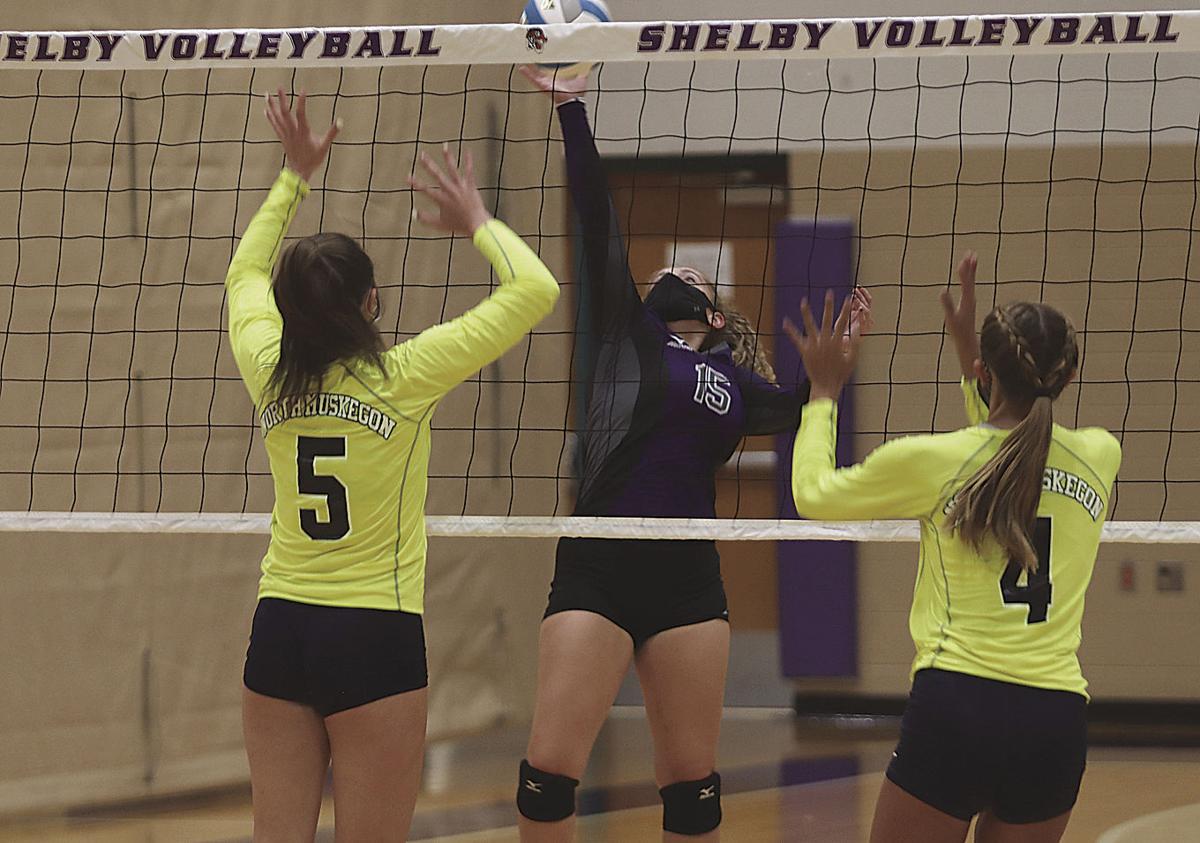 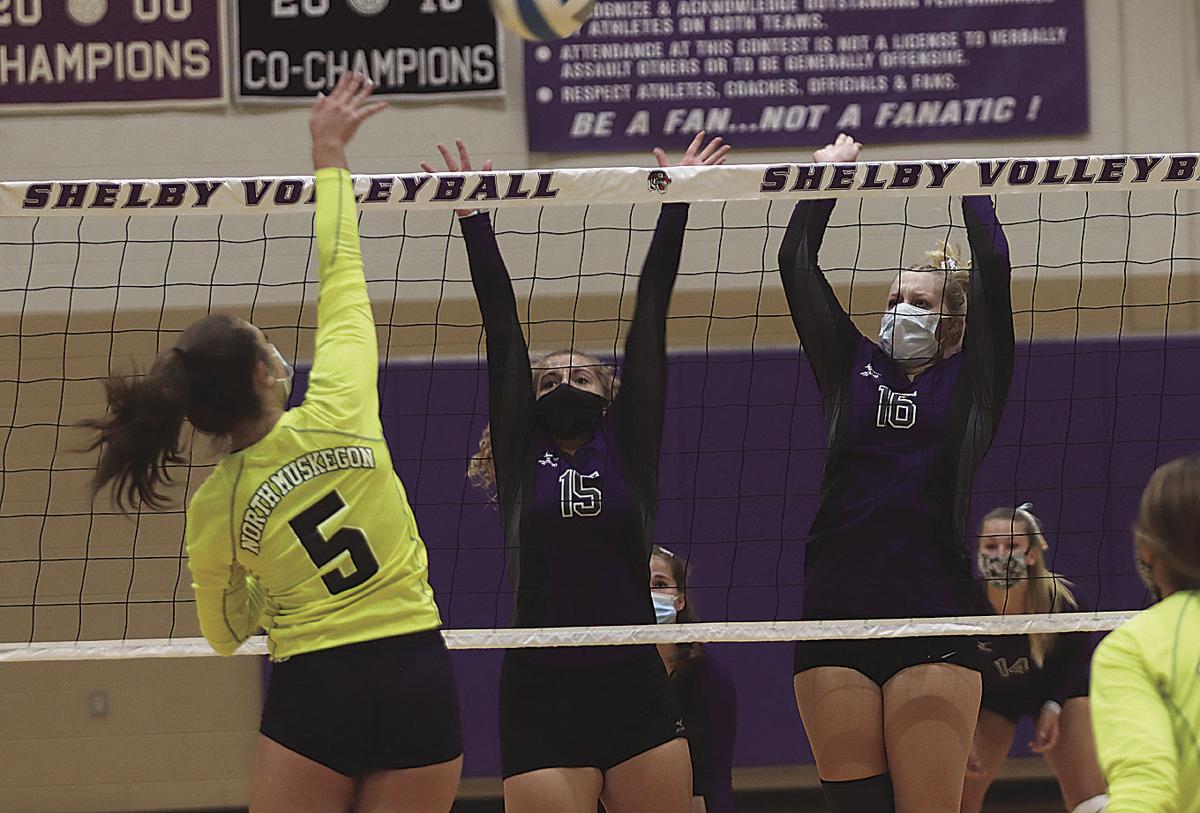 Shelby’s Kendall Zoulek (left) rises up for an attack against North Muskegon’s Syann Fairfield during a September WMC match at Shelby. Zoulek picked up all-WMC honors this fall.

Shelby’s Daphne Clark (5) goes to the floor to save a ball while teammate Courtney Brown looks on during the Tigers’ match against North Muskegon Tuesday. Shelby lost, 3-0.

SHELBY — Shelby is still a young team, and a young team without the benefit of a full off-season. The Tigers looked like it Tuesday, dropping a three-game match to North Muskegon to open West Michigan Conference play, 25-9, 25-8, 25-19.

Offensive struggles in particular were the culprit; coach Tom Weirich said none of the Tigers’ regular hitters posted a positive hitting percentage, meaning they made more attack errors than successful kills.

“We’ll never win a match that way,” Weirich said. “We spent most of the night trying to beat ourselves, and it turned out we did.

“What’s nice is I saw this team Friday night play way better than this against two other really good teams (Hesperia and Newaygo). I know they have it in them...We’re better than that. Until I see them play like that again, I’ll stand by the fact that they’re going to play better next time.”

Shelby (1-2, 0-1 WMC) got off to a good start in game one, holding a 6-3 lead and forcing a Norse timeout. However, the visitors stormed out of that break with an 18-1 run, taking command of the match.

Things weren’t much different in game two, as the Norse jumped ahead 8-3 and then 15-5, cruising to the win there.

Shelby cheer looking forward to any season it can get

In game three, North Muskegon put some reserves in, and Shelby took advantage, erasing an early 8-1 deficit and going on a nice serving run behind Morgan Weirich. The Tigers had a 16-15 lead before the Norse hit consecutive aces and pulled away to complete the sweep.

Weirich said his team’s struggles were mental as well as physical.

“If we play that way in game one, we can tweak little things,” Weirich said. “But when you have to do wholesale changes or start talking about effort and working and stuff like that, those are wasted timeouts for me if I have to tell them to do that. It’s already too late.

“We didn’t serve receive particularly well, and that makes our setting struggle at times. That just doesn’t give our hitters a chance. When we did have a chance, we didn’t make North Muskegon touch the ball hardly at all tonight.”

If there was a silver lining, it was that the Tigers won’t have to dwell on this one long. They play Ravenna Thursday in another league match.

“We have to grow,” Weirich said. “I told them, we’ll see either our Friday night or our Tuesday night team on Thursday, and I know the one I want to see.”