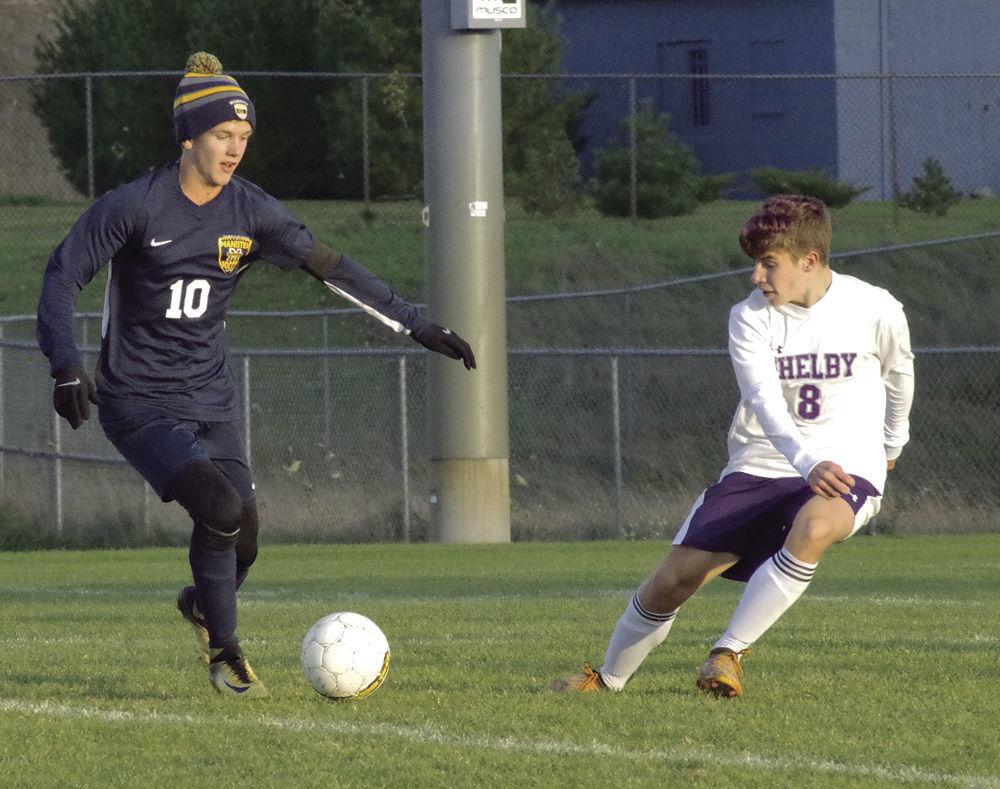 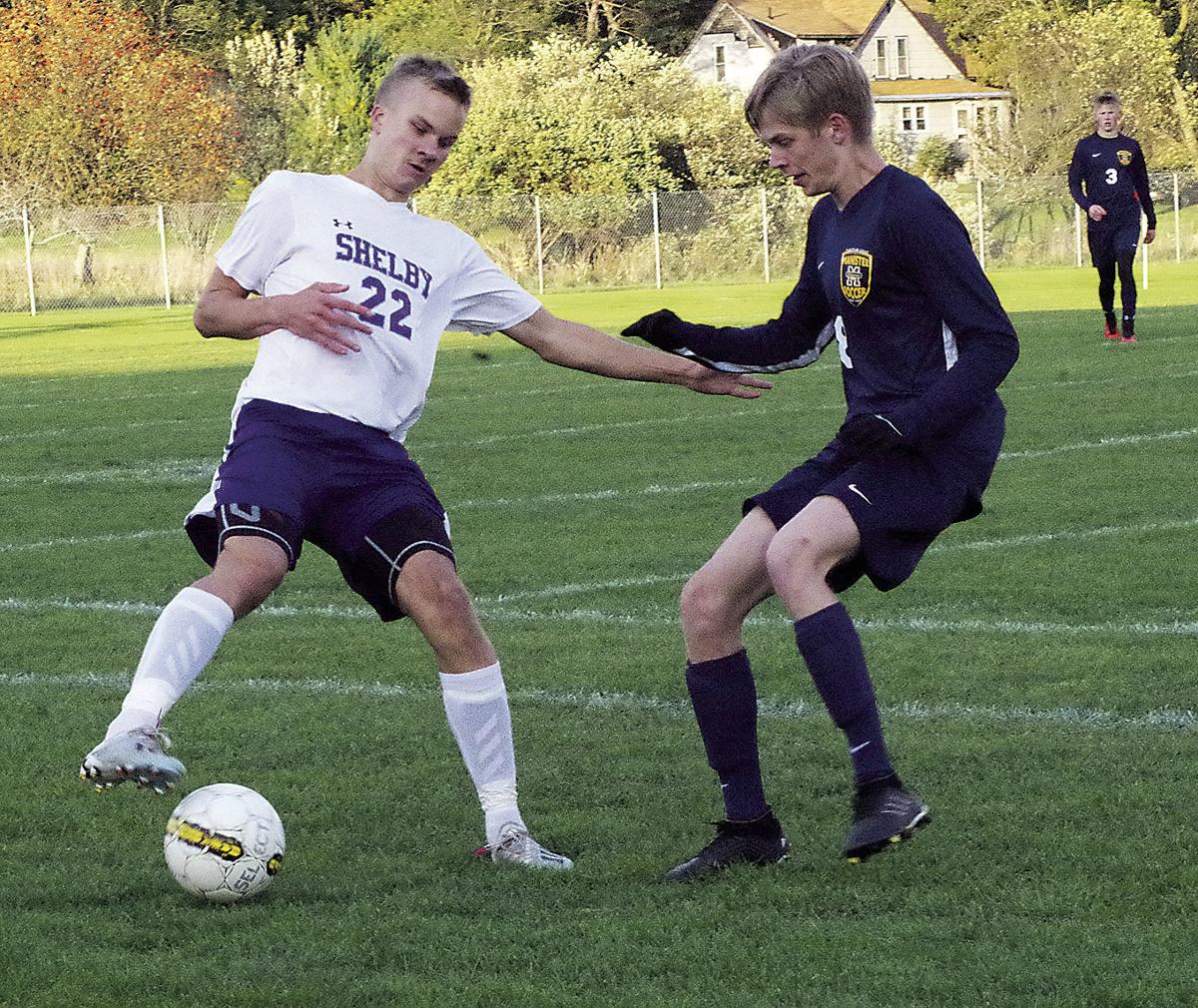 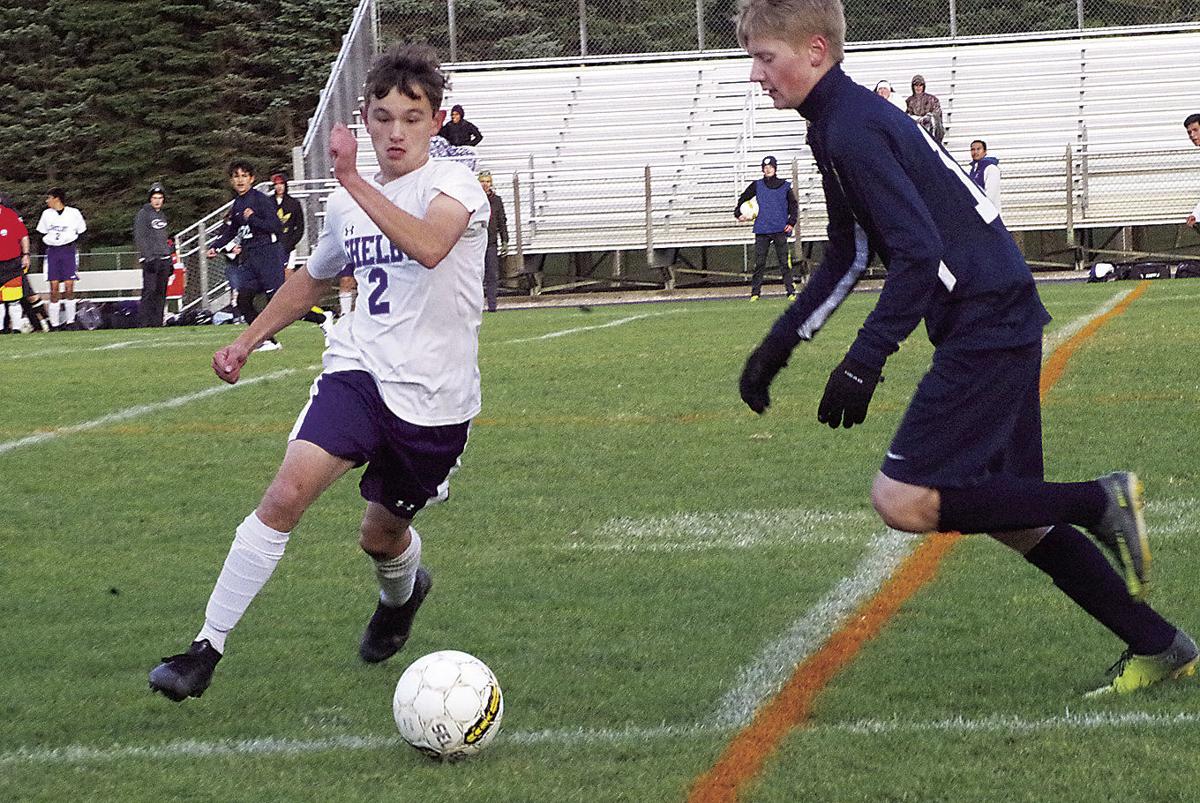 Shelby sophomore Riley Garcia (2) looks to dribble the ball past Manistee senior AJ Anderson (right) in Monday night's district semifinal game at Chippewa Field. The Tigers avenged an earlier loss to the Chippewas with a 3-1 victory.

Shelby sophomore Riley Garcia (2) looks to dribble the ball past Manistee senior AJ Anderson (right) in Monday night's district semifinal game at Chippewa Field. The Tigers avenged an earlier loss to the Chippewas with a 3-1 victory.

MANISTEE — Shelby scored the first goal of the game four minutes in, and never trailed in defeating Manistee, 3-1, in a district semifinal game at Chippewa Field Monday night. That sent Shelby on to the finals Wednesday, also at Manistee, against Ludington.

“We wanted to play our best game today, and we did,” Shelby head coach Jairo Coronado said. “I told the guys we were going to start from the very first second, and I asked them to give me their best.

“There might not be a tomorrow, so we talked about that. We got a goal early, and we were able to play with that. We knew how they (the Chippewas) play, so we came out with different ideas, and it worked.

“I’m so proud of my guys. We wanted to get to the district finals, and here we are.”

Manistee had been on a decent run of its own, coming into the game having won four of their last six games, including a convincing 7-0 shut out of Hart in the pre-district round last Friday.

But the Chippewas struggled against the Tigers, who stifled their attack at every turn and had an answer for anything Manistee tried on the offensive end.

“We couldn’t grasp our possession and move quick enough through the midfield,” said Manistee head coach Brandon Prince. “Shelby did a nice job filling space in the places we wanted to play, and even when we adjusted to it we just couldn’t find it.”

Shelby had Manistee doubled up on shots on goal, 8-4, until late in the game when the Chippewas made a furious push to tie the score, or perhaps pull out the win.

Manistee was outshot, 9-6, for the game.

“Our defense didn’t give up a lot,” Prince said. “They (the Tigers) did have some pushes. We allowed too many set pieces in the first half. We talked about that at halftime, keeping their corners away. That’s where a lot of their attack came.”

Senior forward Layton Jennings put the Tigers up, 1-0, only 4:31 into the game, drawing Manistee keeper Drew Schlaff to the left and then drilling the ball into the left corner of the net.

The Chippewas scored the equalizer with 8:15 left in the half when Will Elbers on a pass from AJ Anderson. But the Tigers answered with 4:24 remaining in the first period when senior Diego Gonzalez drilled in a shot off an assist from junior Logan Claeys for a 2-1 halftime lead for Shelby.

“Garcia did a great job today, and our stoppers Henry Kidder and Logan Claeys did a very good job today,” Coronado said. “I’m very proud of the job the guys did on defense.”

Shelby scored its third and final goal with 27:35 left in regulation when senior Ville Kantonen charged down the right side and curled a shot inside the left post past a diving Schlaff.

Mainly cloudy with snow showers around in the morning. Temps nearly steady in the low to mid 30s. Winds NNW at 5 to 10 mph. Chance of snow 40%.