You are the owner of this article.
Edit Article Add New Article
You have permission to edit this article.
Edit
Welcome, Guest
Home
COVID-19
News
Sports
Obits
Multimedia
Viewpoint
Living
Classifieds
+ More
1 of 2 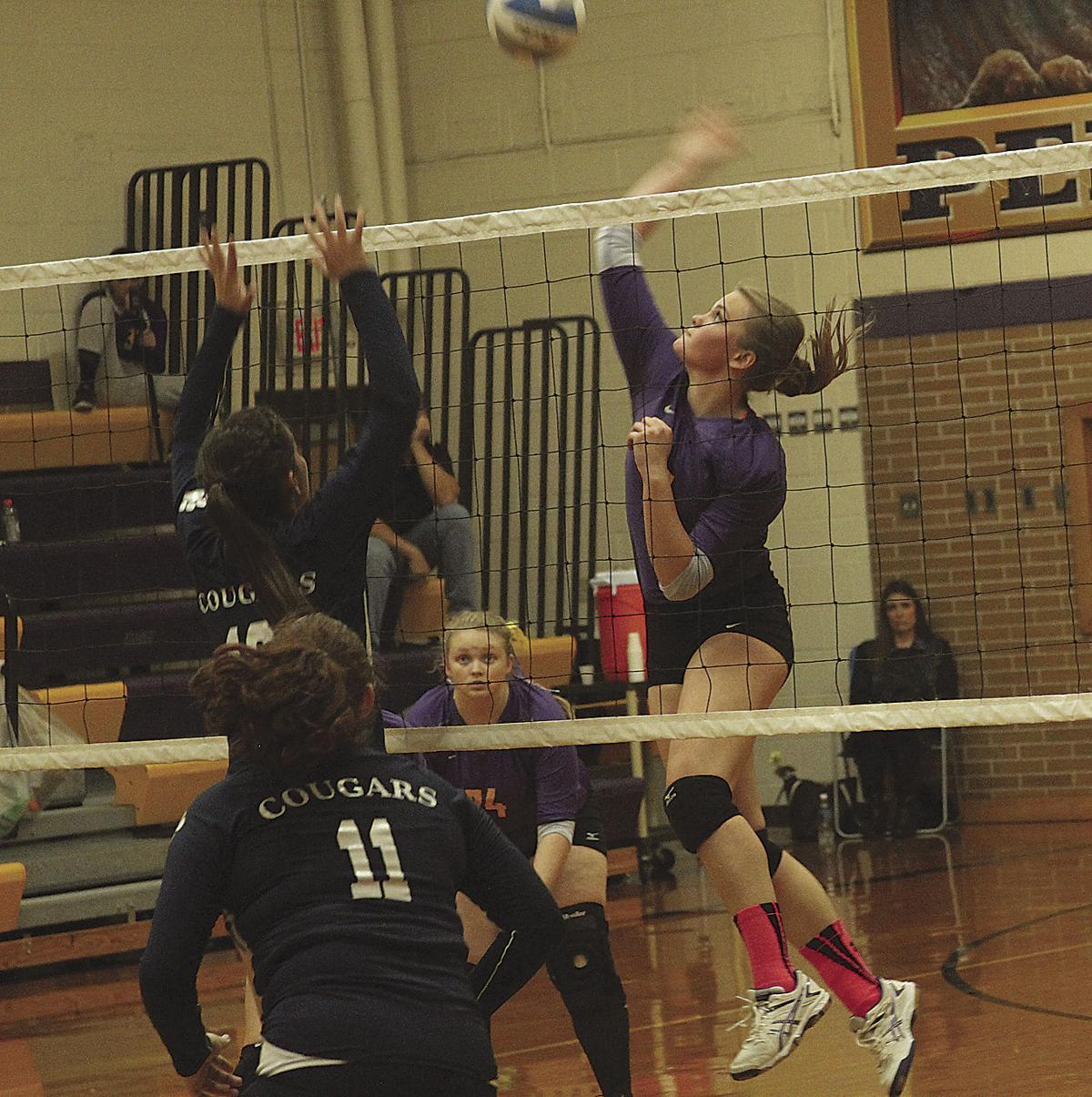 Pentwater’s Taylor Wilkinson fires an attack during a 2016 match against Big Rapids Crossroads. Wilkinson’s excellence in both basketball and volleyball made her among the most memorable Falcon athletes since 2012.

Pentwater’s Glenn Miller (10) slides into second base with a steal during a 2018 contest against Brethren. Miller’s baseball brilliance was a leading factor in his being one of the most memorable Pentwater athletes since 2012.

Pentwater’s Taylor Wilkinson fires an attack during a 2016 match against Big Rapids Crossroads. Wilkinson’s excellence in both basketball and volleyball made her among the most memorable Falcon athletes since 2012.

Pentwater’s Glenn Miller (10) slides into second base with a steal during a 2018 contest against Brethren. Miller’s baseball brilliance was a leading factor in his being one of the most memorable Pentwater athletes since 2012.

This week, our best-of series continues, and this time we’re looking at one of the smaller schools, not just in the county, but in the whole state — Pentwater. The Falcons, however, have regularly punched above their weight class, and have produced more than their share of memorable athletes. Here’s a sampling of some of the best that have walked their halls since 2012.

Linnea McDonough - If it felt like Linnea McDonough was playing sports for Pentwater forever, you can’t be blamed. Starting as an eighth-grader, the former Falcon was a fixture in Pentwater lineups in volleyball, basketball and golf. McDonough, along with teammate Emily Gebhart, spearheaded the Falcons’ incredible turnaround from four combined wins in 2011 and 2012 to 23 victories and a district championship in 2013 — the first in a string of titles that is still ongoing. She earned all-West Michigan D League first team honors that year, and would repeat those honors three more times. In hoops, Linnea led the Falcons in scoring, assists, steals and blocked shots as an eighth-grader and a freshman. McDonough also helped the Falcon golfers to the state meet and later joined the Calvin College links team.

Julia Hall - Like so many other great Falcons, Julia Hall was a three-sport star. Hall was a team leader in volleyball, basketball and especially track. Hall was a two-time regional champion and all-state performer in long jump, and also claimed a regional title in the 200 meters as a senior and earned all-state honors in the 100 meters as a freshman, among numerous state qualifications. She helped the Falcons earn a conference title in 2018, won a slew of individual league titles, led the team in scoring in all four of her seasons, and holds seven school records (four outdoor, three indoor). On the courts, she helped the Falcons win five district volleyball titles — earning a pair of all-WMD first team honors — as well as a district basketball title and a conference basketball title, scoring an all-WMD first team spot as a senior.

Emily Gebhart - Emily Gebhart was everywhere for Pentwater during her time. Along with her teammates, she led the Falcon volleyball program’s turnaround. She picked up a pair of all-WMD first team honors, winning three district titles, and was named team MVP in 2014. She played softball as a freshman in 2013, and when that team went on hiatus, she joined the baseball team in 2015 and ‘16. In her first season on the baseball diamond, she proved adept at working walks, posting an on-base percentage of nearly .500 while playing the challenging third base position. She was also a strong basketball player and went on to play that sport at Grace Bible College.

Glenn Miller - Few Falcons have played a sport better than Glenn Miller played baseball. Miller led Pentwater to three district titles and two conference championships while playing the dual roles of ace pitcher and middle-of-the-order shortstop. As a senior, Miller had his finest season yet, hitting .579 and posting a 1.31 earned run average on the mound, earning a first team all-state nod. Miller went on to burst on the scene at Spring Arbor as a freshman, focusing on the shortstop position, before his season was cut short by the COVID-19 pandemic, creating optimism he could potentially even play as a professional someday. Miller was also a steady and strong performer on the basketball court, making second team all-conference as a senior.

However it works out, give MHSAA credit for trying to give athletes their sports

Sam Wagner - Sam Wagner starred across four sports at Pentwater, excelling in basketball, where he helped the Falcons to a 2012 district title and was first team all-conference in 2015, and soccer, where he was the engine that made the Falcons go most of the time, and also contributing to the baseball team. His best sport, though, was golf, where he picked up from where his older brother Alex, who had a fine Falcons’ career in his own right, left off. As a sophomore, he led the Falcons to the program’s first regional title and a sixth-place finish at state, tying for 13th as an individual. In his junior season, he tied for second at state, and as a senior he claimed a regional title. Wagner also earned four straight individual county tournament titles.

Taylor Wilkinson - Taylor Wilkinson is another Falcon that seemed like she was around a very long time. She was an eighth-grader on the 2013 Pentwater volleyball team that turned the program around, and racked up over 1,000 career kills before her five-year run, all of which ended with district titles, was over. She made three all-WMD first teams. Wilkinson was also a star on the Falcons’ basketball team from day one — as an eighth-grader, she recorded a 16-point, 10-rebound double-double in her first-ever game. She earned three straight all-WMD first teams in that sport, too. Wilkinson also contributed to the Falcons’ strong golf program.

Terra Cluchey & Jhordan Miller-Rowe - It would be hard to separate these two players, who led the charge for the Falcons in two different sports — volleyball and basketball. (Miller-Rowe still has another year to go at Pentwater, while Cluchey graduated this spring.) Cluchey and Miller-Rowe took the torch from their spiker forebears on this list and continued the team’s run of conference and district championships, earning a pair of first team all-WMD nods apiece. They also contributed to the Falcons’ 2018 conference title and 2019 district title in basketball and helped them to a strong season this past year, with Cluchey getting first team all-league as the team’s leading scorer and Miller-Rowe picking up a second team nod. Both girls also played softball during their Pentwater careers.

Austin Hofmann - Hofmann was a Pentwater star in two sports — track and basketball — but added a third outside the school’s walls. Hofmann was the first to take advantage of the school’s co-op with Mason County Central for football, putting up spectacular numbers against West Michigan Conference competition in 2017 and 2018. Hofmann memorably exploded for over 300 rushing yards in a 2017 victory over Shelby, and parlayed his success into an offer to play at Division II Davenport, where he’s in line to play linebacker whenever the Panthers can return to action. Hofmann also excelled in track, where he qualified for state in three sprint events as a senior and helped the Falcons to a conference championship. Hofmann, a rebounding ace, also averaged a 12/12 as a senior to earn all-league first team honors on the court.