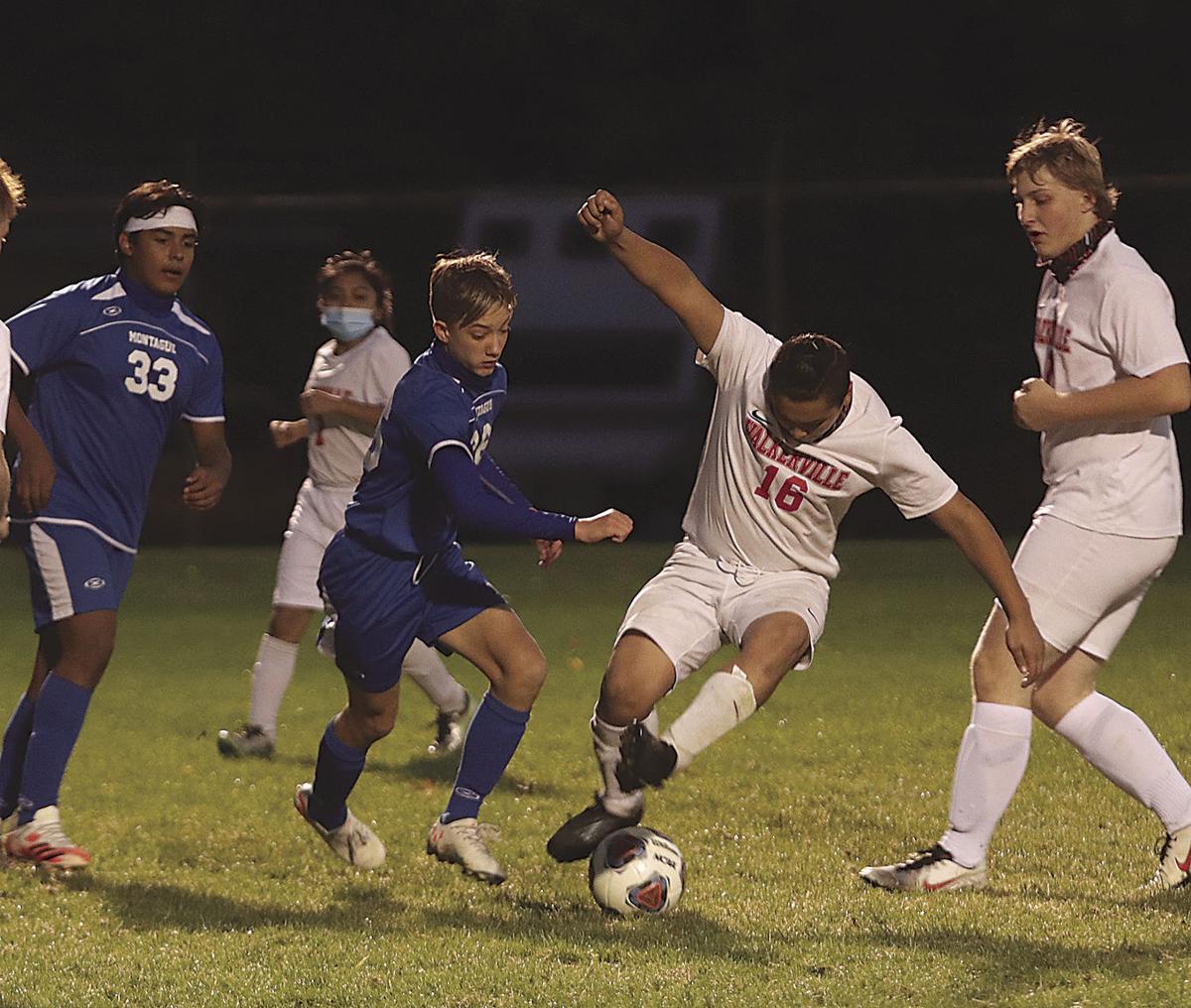 Walkerville’s Lorenzo Martinez (16) is tripped up while trying to play the ball against Montague’s Christopher Aebig during Monday’s game at Montague. Montague won the game, 7-1. 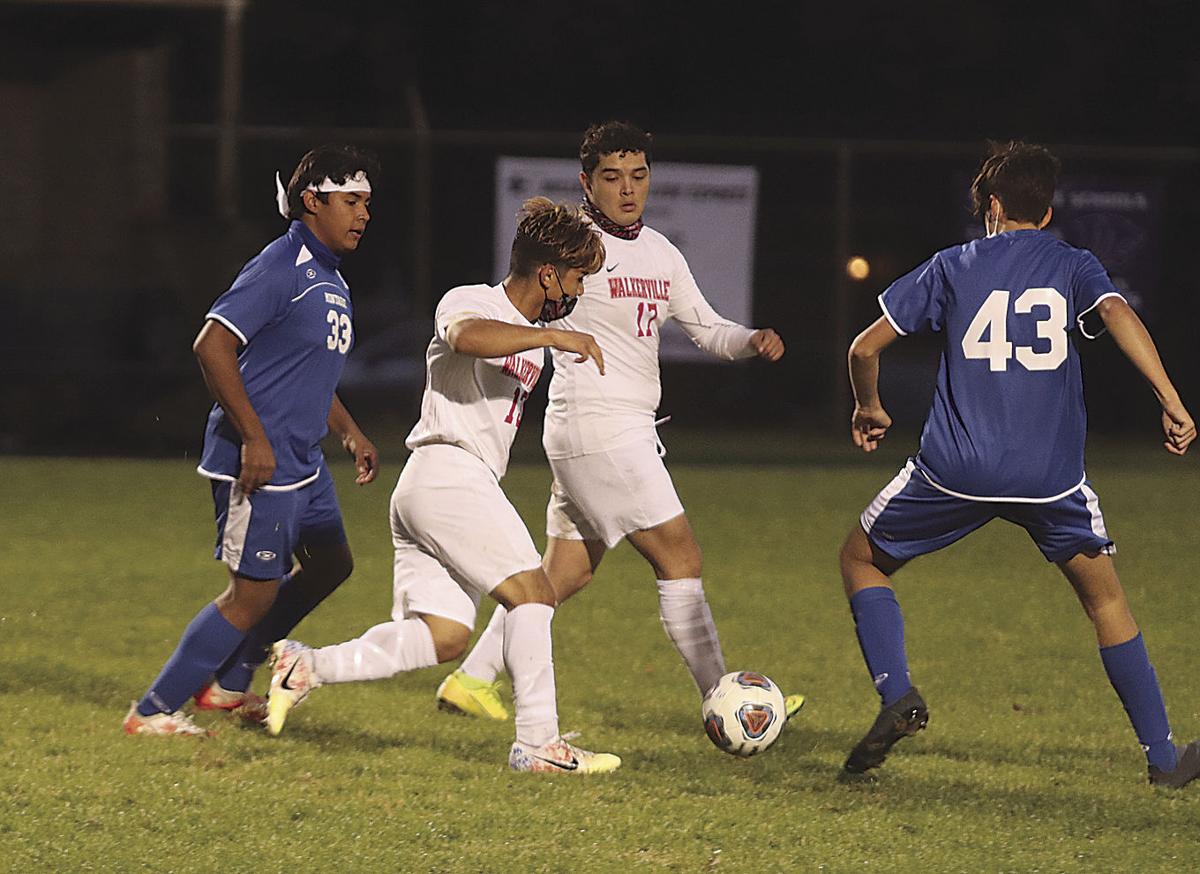 Walkerville’s Lorenzo Martinez (16) is tripped up while trying to play the ball against Montague’s Christopher Aebig during Monday’s game at Montague. Montague won the game, 7-1.

MONTAGUE — Walkerville played its best half of the season in the first half of Monday’s game against Montague, but the Wildcats still fell short in a 7-1 defeat.

More concerning, coach Ralph Achterhof said the future of the program is uncertain at the moment due to low numbers. If not for a handful of girls on the team this year, Walkerville wouldn’t have been able to field one, and turnout among the underclassmen has been low. Nine of the 15 players listed on the team roster are seniors.

“There are lots of boys at school who could play soccer, but they just don’t want to for one reason or another,” Achterhof said. “I was a little disappointed not to get more in. When the kids come in in ninth grade, they’ve been out of soccer for two or three years, because of the fact that we basically have rec soccer and then they’re basically done until they get to ninth grade.”

Achterhof added that another factor in the lack of turnout has been the school’s football co-op with Hesperia, as a few Wildcat students are playing on the Panthers’ team instead of playing soccer. Injuries have also been an issue, with two of the girls players out for the season.

Meanwhile, on the field, things went extremely well early on for the Wildcats (0-7). They even opened the scoring on a goal by Alex Mendoza, who fired a shot off the left post and into the net. It was only Walkerville’s second goal of the season; the first came against Kent City in the season opener Sept. 8.

Mendoza, a senior, is described as the team’s best player by Achterhof, and he said Mendoza has had to play out of position by necessity most of the season. Monday was the first time he was able to play forward.

“He was always playing in the middle in front of Mason (Simpson) and did all the defensive and middle work,” Achterhof said. “Then he didn’t have more energy to do anything up front. Today, he played up front. In the first half he did pretty good, even up front.

“It’s been tough. I feel bad for Alex, but I kind of misuse Alex at other spots because I have to, instead of him being a forward.”

Walkerville held its early lead for nearly nine minutes before Montague pushed a goal past keeper Jared Lopez. The host Wildcats took the lead with 2:43 to play in the half and led 2-1 at halftime.

Walkerville’s lack of depth hurt it in the second half, as Montague poured in five goals, adjusting to the Wildcats’ pack-it-in style of defense by lobbing long shots into the goal. Montague’s Brenden Mahoney scored three of those five goals.

Achterhof said the team’s depth is further impacted by most of the team having other sports they have to play and therefore sometimes not making it to practice. Most of the team plays at least one other sport, and Zamorah De La Paz plays two.

The Wildcats play Calvary Christian Monday in the pre-district game, and barring an upset it will conclude the Walkerville season. Achterhof hopes the off-season will only last into 2021, but with only six players on the roster who won’t be graduating, it will take an influx of manpower to continue the program.