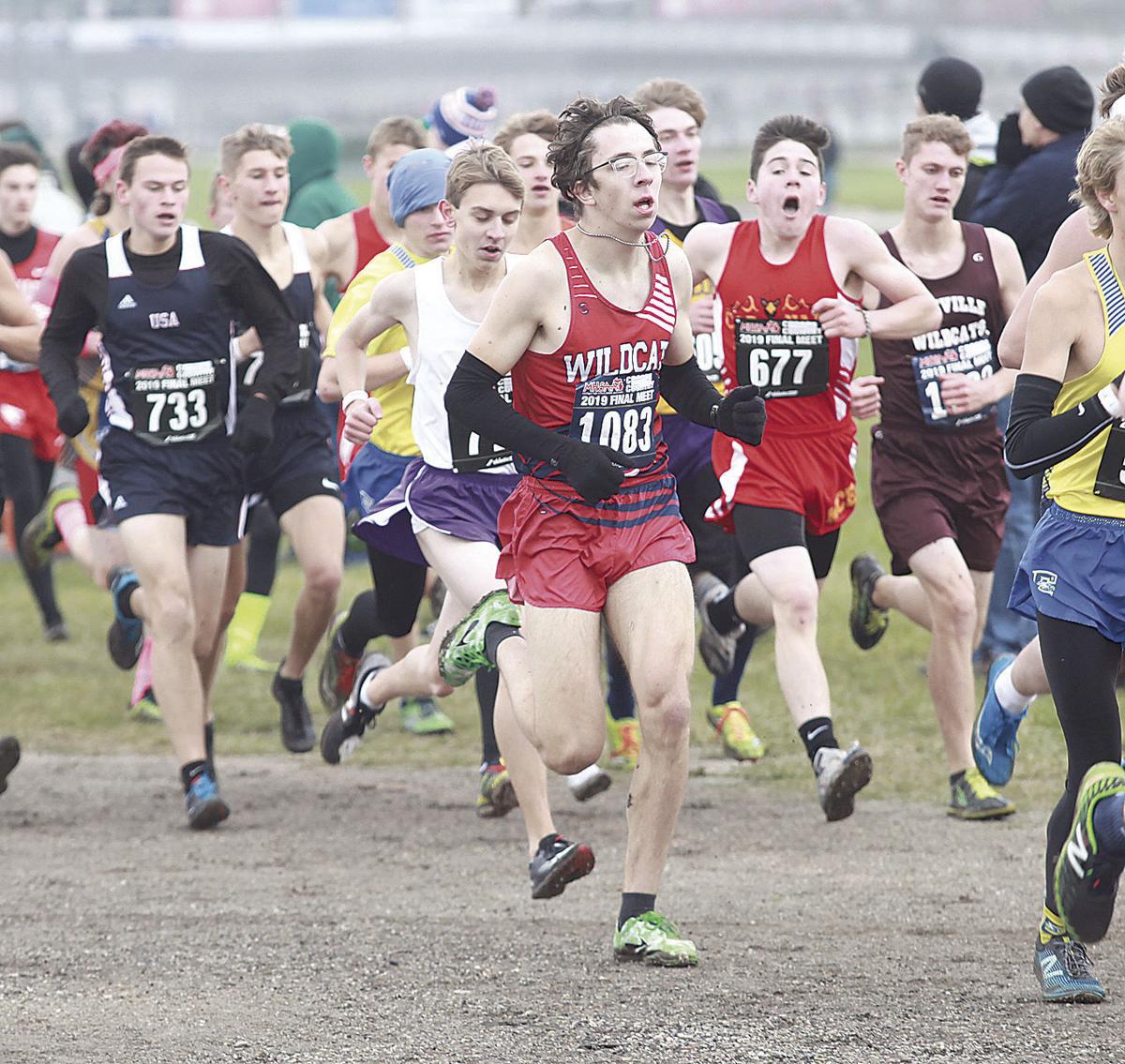 Walkerville’s Shane Achterhof (center) works his way towards the front of the pack during last fall’s Division 4 state finals meet at Michigan International Speedway. Achterhof was a running star at the school, earning three Class D state titles and three all-state honors, making him among the most memorable Wildcats since 2012. 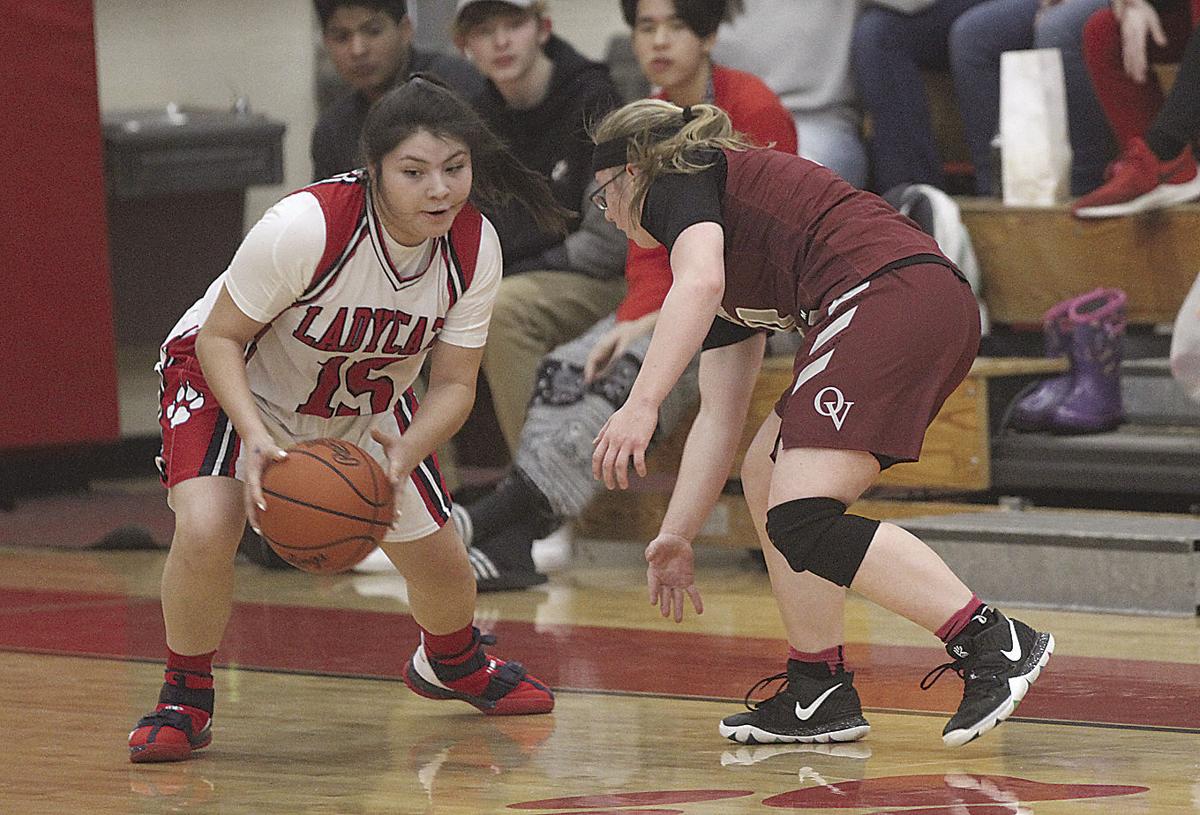 Walkerville’s Mykaela Berumen (left) steals the ball from Orchard View’s Mackenzie Filipiak during a January game at Walkerville. Berumen led the Wildcats to a WMD championship in 2020 and had a dominant season, with over 300 points and 200 rebounds.

Walkerville’s Shane Achterhof (center) works his way towards the front of the pack during last fall’s Division 4 state finals meet at Michigan International Speedway. Achterhof was a running star at the school, earning three Class D state titles and three all-state honors, making him among the most memorable Wildcats since 2012.

Walkerville’s Mykaela Berumen (left) steals the ball from Orchard View’s Mackenzie Filipiak during a January game at Walkerville. Berumen led the Wildcats to a WMD championship in 2020 and had a dominant season, with over 300 points and 200 rebounds.

Walkerville, through no fault of its own, often slips through the cracks around here. It’s the smallest school by enrollment in the area — 67 is the Wildcats’ official number for 2020-21 MHSAA purposes — and because of it, its teams often face an uphill battle. However, the school has had some strong moments over my tenure here, and on an individual basis, they’ve had some special athletes. Here, we run down some of the most eye-catching Wildcats who have taken the field since 2012.

Emily Merten - Emily Merten never once ran in a cross-country meet in which her team could score, but that didn’t stop her from assembling an impressive list of accomplishments at Walkerville. The Wildcat star qualified for state five times, including winning a pair of regional championships, and picked up all-state honors in three of those five runs. Merten also starred, naturally, on the track, winning the West Michigan D League title in the 3,200-meter run four times. In between running, Merten was also an effective basketball player, leading the Wildcats in scoring as a senior en route to all-conference first team honors.

Sam Sweet - It’s unlikely anyone’s ever played more varsity sports than Sam Sweet did at Walkerville. At one point, Sweet was playing five sports for the Wildcats — cross-country, soccer, basketball, baseball and track. He was good at all of them, but especially so in basketball, where he averaged 18 points and 10 rebounds per game as a senior. So impressive was his work on the court that he was named first team all-conference despite the Wildcats’ winless record in his senior year. He eclipsed the 1,000-point career mark as well. Sweet was also a force early in the Wildcats’ soccer program’s infancy and was a strong cross-country runner, although a foot injury in a soccer game ended up costing him most of his junior season in both sports.

Mykaela Berumen - Berumen’s Walkerville career is hopefully not over, with her senior season still to go, but her place in Walkerville history is already secure. Berumen plays softball, track and basketball at the school, but it’s the latter where she shines brightest. This past season, she put together a season that coach Marc Pascavis called one of the most dominant he had ever seen; Berumen had over 300 points and 200 rebounds for the season, piloting the Wildcats to an outright WMD title, the team’s first since 2005. Berumen stuffs the stat sheet every night, including when she notched a quadruple-double — 13 points, 14 rebounds, 11 assists and 11 steals — in a huge double-overtime win over Big Rapids Crossroads. She also can score in bunches, as evidenced by a 33-point outburst in a win over Mesick. In track, Berumen also won the WMD title in the 400 meters as a sophomore in 2019.

Dillon Brown - Dillon Brown teamed with classmate Adrian Haligus to lead the Walkerville boys basketball team to a district title in 2019, a triumph for a program that had gone without one for 16 years. Brown eclipsed the 1,000-point career mark late in his senior year in a 34-point performance against Brethren, just a couple of weeks after Haligus had done so. Brown was first team all-league as a senior and second team as a junior, averaging a 16/10 his junior season. Brown also was a three-time state qualifier in cross-country and two-time qualifier in track as part of the 3,200-meter relay team. Brown was also a key part of the Wildcats’ soccer team.

Adrian Haligus - Along with Brown, Adrian Haligus was a driving force behind Walkerville’s basketball turnaround and ultimately its district title in 2019. Haligus was a 1,000-point career scorer and reached the milestone in style by exploding for 52 points in a win over Marion. A two-time all-league performer, Haligus averaged over 20 points per game as a junior. Haligus was also a very good soccer player, earning first team all-league, and nearly qualified for state in long jump on the track as well.

Shane Achterhof - Doing something no one has ever done before is a good way to make it onto a best-of list, and Shane Achterhof did just that at Walkerville, becoming the first runner ever to win the Class D state championship cross-country meet three times. (The Class D meet has existed since the mid-2000s.) Achterhof also won three regional championships and was all-state three times; he was just one spot short, as an eighth-grader, of becoming a five-time state qualifier. On the track, Achterhof was all-state three times and would’ve likely added to that number had the 2020 spring season not been canceled. He took second place in the 3,200 meters as a sophomore and fourth as a junior, and was also third in the 1,600 as a sophomore. He earned three conference titles in the 3,200 and two in the 1,600, plus an 800-meter title in 2019. Achterhof also had a strong showing on the basketball court, leading the team in scoring as a senior.