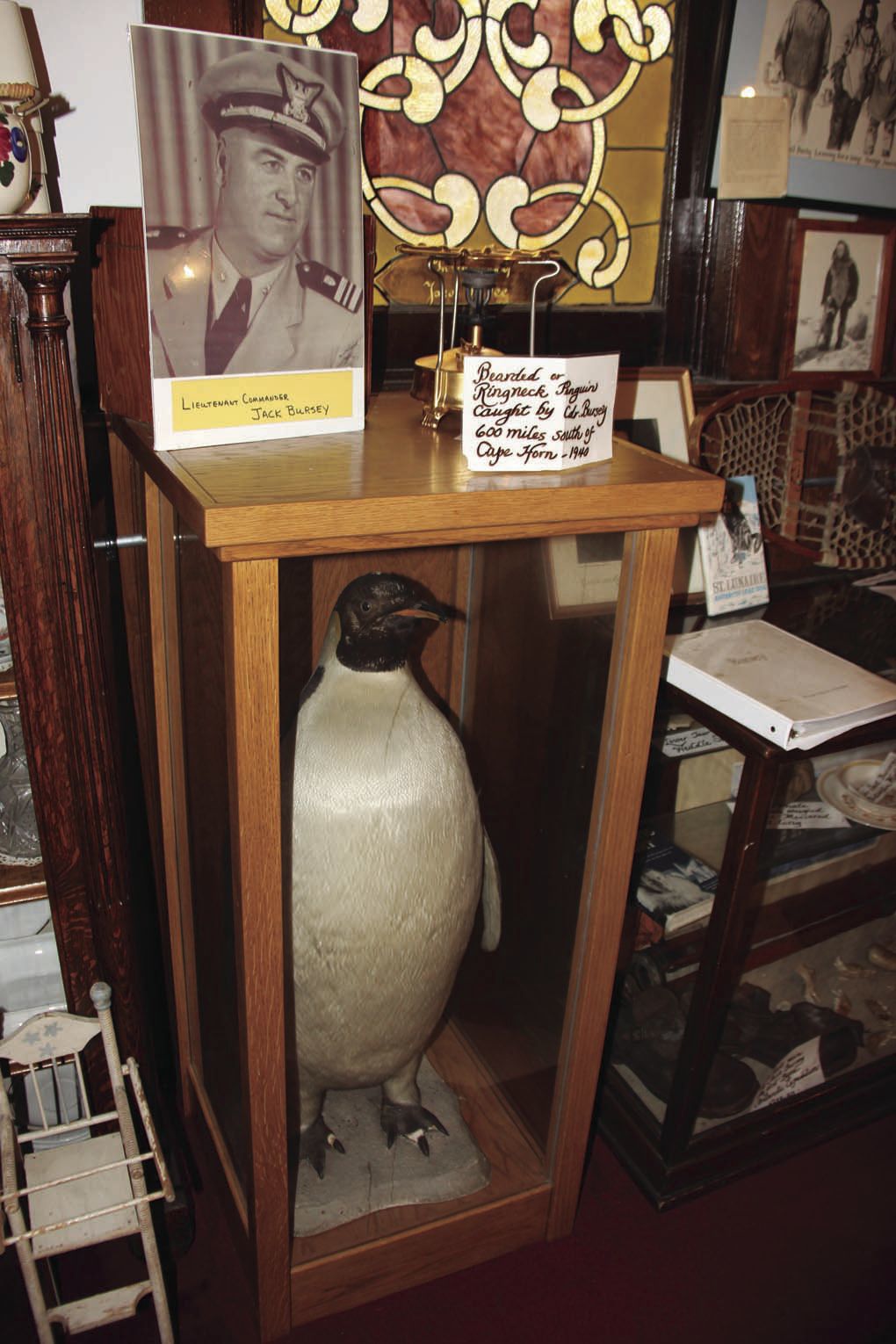 A penguin on display at the Montague Museum. The penguin belongs to the Jack Bursey exhibit at the museum. 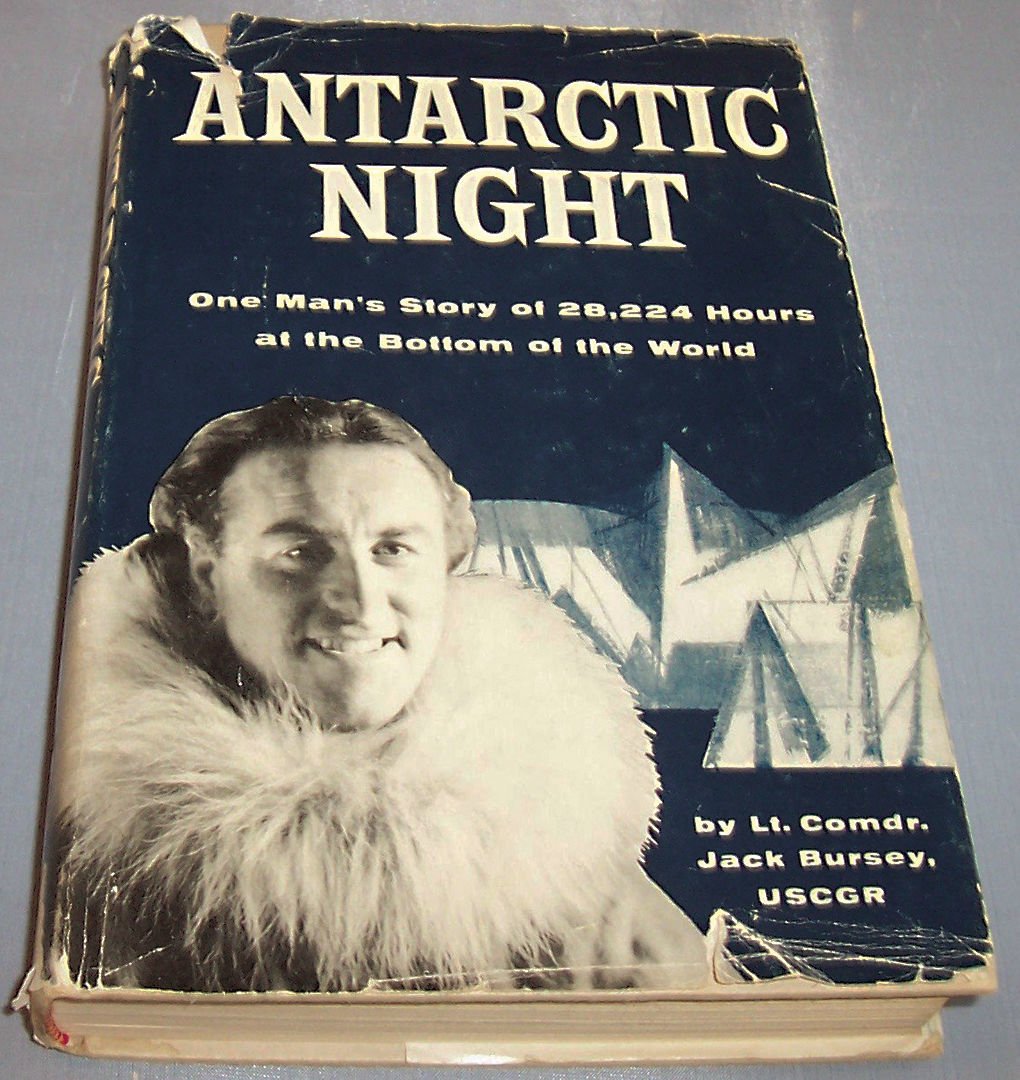 A copy of the book that Jack Bursey wrote about his experiences traveling to the South Pole.

A penguin on display at the Montague Museum. The penguin belongs to the Jack Bursey exhibit at the museum.

A copy of the book that Jack Bursey wrote about his experiences traveling to the South Pole.

Bursey is best known for the two expeditions he took to the South Pole with Admiral Richard E. Byrd in 1928-1930 and 1939-1941. He would settle down in the Montague area in 1958 after visiting the philosopher/mystic Joseph Sadony at his home.

In addition to building his log cabin on Old Channel Trail, he owned and operated the general store Acre of Diamonds that was across the street. His Montague Township home was torn down on Oct. 12.

Born in 1903, Bursey grew up in the small village of St. Lunaire in Newfoundland. Although Bursey was not born a Canadian the island would eventually join the country in 1949.

He spent his youth fishing the Grand Banks of Newfoundland from his father’s boat, traveling the frozen winters with his sled dogs, and skinning seals for his food and the clothing he wore. Despite their working class background, Bursey’s family was considered well off based on the boat and the general store his father owned.

Wanting an education, at the age of 21 Bursey moved to the United States where he attended school in Boston. It was in 1927 though when Bursey would first learn of Admiral Byrd.

Byrd was in search of dog drivers and skiers for his expedition to the South Pole. Bursey applied, but so did 50,000 other people.

Undeterred, the young Bursey moved to New York to improve his chances of getting the job. He was willing to do whatever it took to be a part of the expedition, and even considered becoming a stowaway, if necessary.

However, it didn’t have to come to that. Bursey landed an interview with Byrd and got the job. Setting sail, Bursey became a crew member on the City of New York, one of two vessels used for Byrd’s expedition.

The other ship was the Eleanor Boiling, which contained the pieces to an aeroplane, that would be assembled and used to explore the Antarctic.

The trip wasn’t without its challenges, but ultimately it proved to be a success. The crews for both ships returned to the United States, and were celebrated with a parade held in New York City. A gold medal was also given to the men from Congress.

In the early 30s Byrd would charter another expedition to the Antarctic. Bursey wasn’t a crew member that time around.

Instead he was working as a tour guide at the Chicago World’s Fair, where the City of New York was on display. It was here that he met his wife, Ada DeGraff from Grand Rapids.

It wasn’t until Byrd’s third expedition that Bursey would return as a crew member. During this time he would make one of the longest dog-sled team trips, and the crew would be the first people to step foot on the Ross Ice Shelf.

He would then later go on to join the U.S. Coast Guard during World War II, spending time captaining a ship in the Philippines. He would also lead an arctic expedition himself as part of Operation Deep Freeze.

During this time he attempted to lead a naval unit known as the Seabees to Byrd Station. However, Bursey and his crew ran into some trouble with the Antarctic crevasses, and were eventually told to turn back.

Bursey would become an author and a lecturer, touring with 16 mm film footage that was shot during his adventures. His daughter, Gloria Bursey, would also become an author.

Cloudy this morning. A few snow showers developing during the afternoon. Areas of patchy fog. Temps nearly steady in the mid 30s. Winds WNW at 10 to 15 mph. Chance of snow 30%.

Scattered snow showers during the evening. Then partly to mostly cloudy overnight. Low around 30F. Winds NW at 5 to 10 mph. Chance of snow 30%.