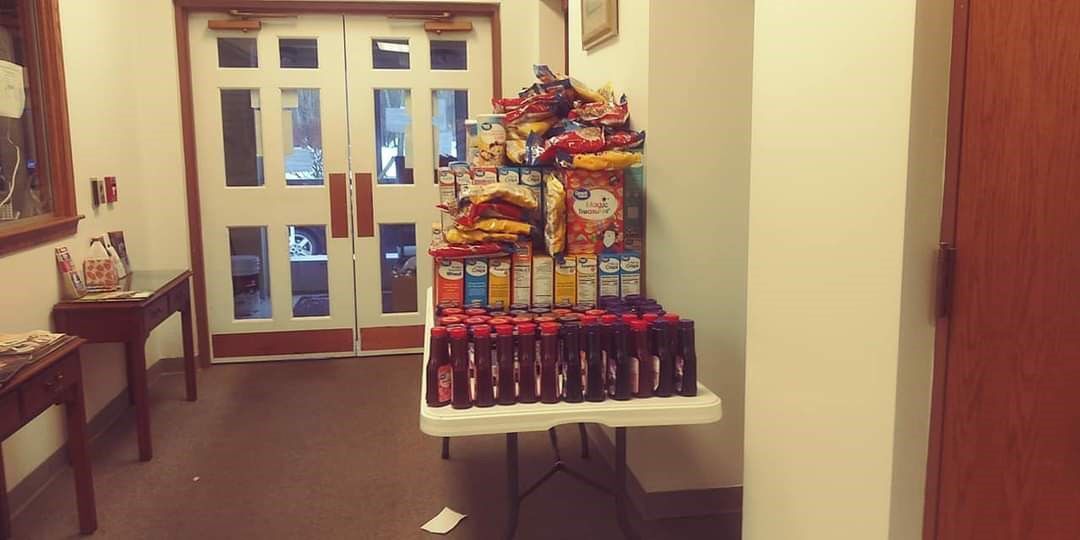 A weeks worth of food items at the Lebanon Lutheran Church in Whitehall. 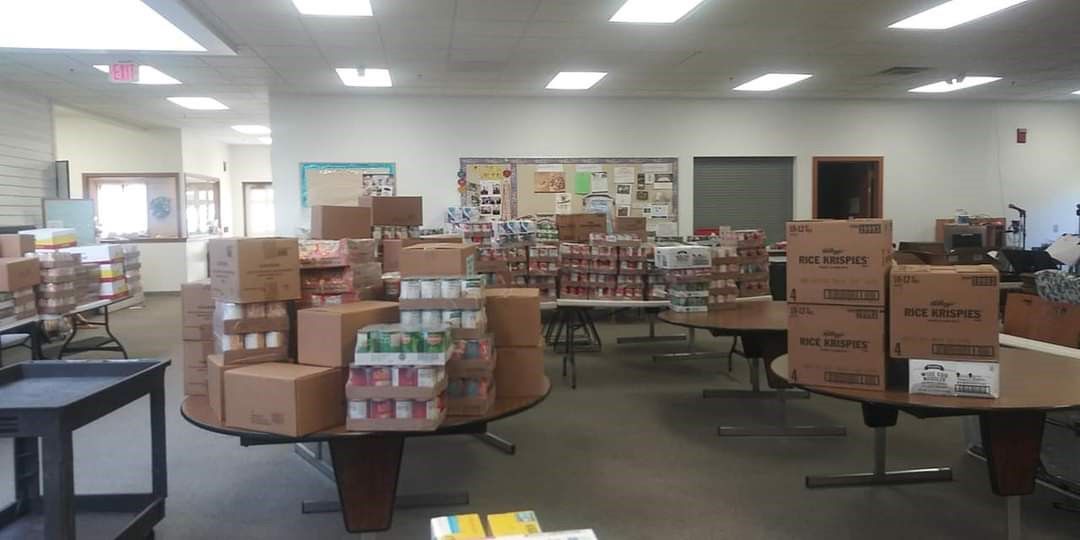 A room full of food for the food pantry at Lebanon Lutheran Church. 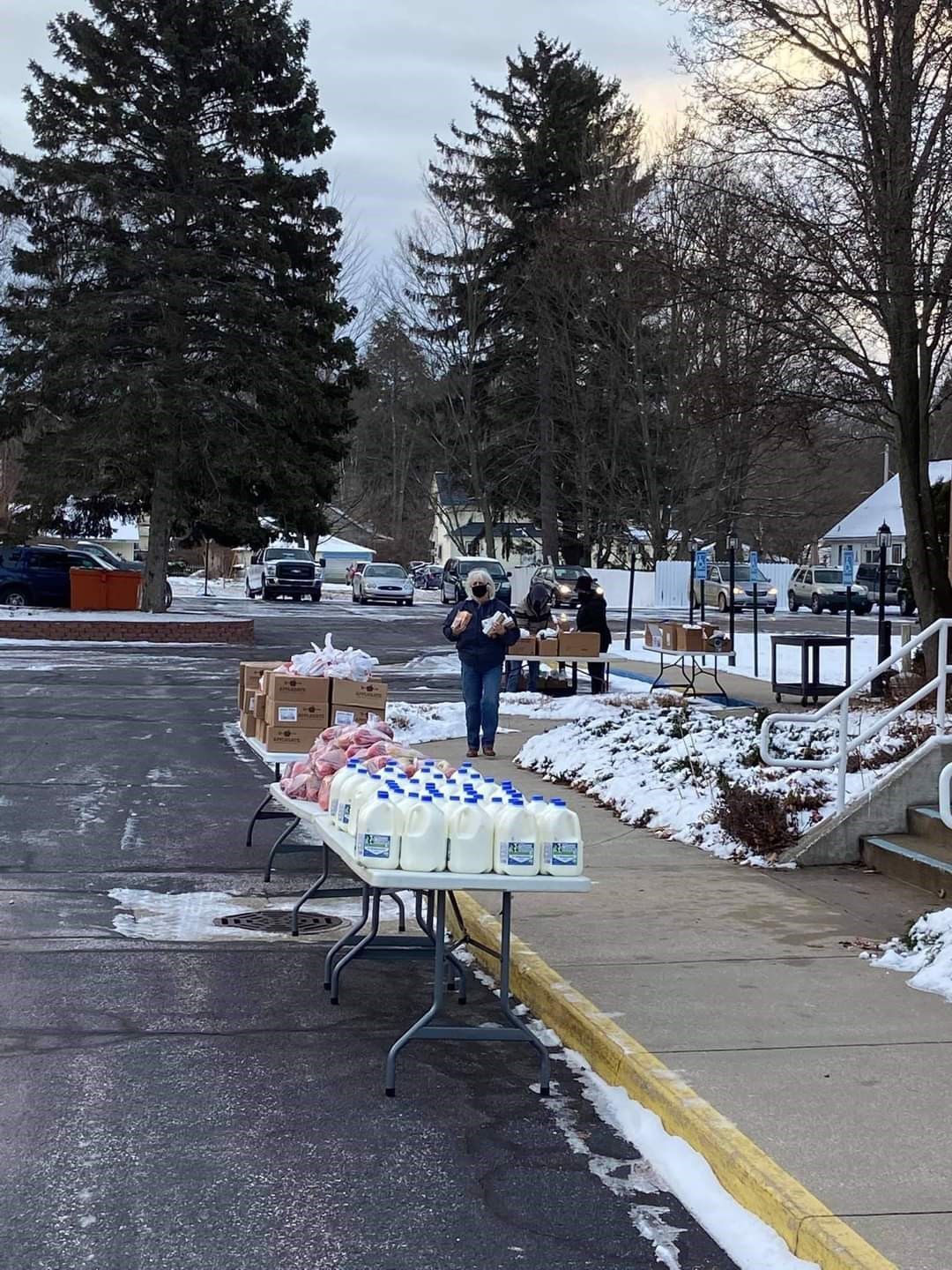 A table set up for outdoor distribution for the White Lake Food Pantry.

A weeks worth of food items at the Lebanon Lutheran Church in Whitehall.

A room full of food for the food pantry at Lebanon Lutheran Church.

A table set up for outdoor distribution for the White Lake Food Pantry.

WHITEHALL – The White Lake Food Pantry at Lebanon Lutheran Church,1101 S Mears Ave., has served a significant role in the community for many years, but is especially important in meeting the needs of individuals and families during this time of Covid.

Pastor Douglas Ogden praises the volunteers and donors who have made this ministry possible since around 1990 when a few women members started putting groceries in a closet and bagging them up when Love Inc. requested food assistance.

The operation has grown significantly since then, though the number of people served has varied from year to year.

The operation of the pantry has changed since March due to Covid restrictions. Prior to March, when the pantry operated in-person, it started out with a hot breakfast.

Clients would come in, take a number and sit down and eat together. When their number was called, they could go into the pantry to shop.

Since March, however, the pantry operates on a drive-in only basis. Wednesday is the day for pick-up, from 9:30 – 10:30 a.m. Clients are required to wear a mask or face covering over their mouth and nose.

All groceries are pre-boxed and ready to go, so the process only takes about a half hour altogether.

The food pantry has seen more and more need, and the number served has gone up for a variety of reasons.

According to Ogden, “When there are layoffs at companies in the area, we see a bump a month later. When businesses shut down, we see more need.”

“But the unemployed or underemployed are just half of our clientele. The other half are retired senior citizens who are trying to live on Social Security alone or have medical issues that have knocked them off track.”

The good news is that donations are also up. “The community is fantastic,” Ogden emphasizes. “And now we’re even getting donations from all over the country as word has spread.”

This has enabled the food pantry to purchase an additional refrigerator so it can increase the number of families served. Among the donations currently being received are some that appear, from their amounts, to be a roll-over from residents’ stimulus checks.

The food pantry gets groceries from Feeding America (formerly Gleaners) in Grand Rapids, which is stocked by companies that have an oversupply. For example, if a supermarket has a sale on crackers and has a large aisle display to draw people to the sale, they will have a surplus at the end, and they donate this surplus to the warehouse.

The amount of groceries required is significant, Ogden explains.

“What the community doesn’t realize is that when you’re serving 90 families, at 10 cans of vegetables per family, that’s 900 cans,” he says. “We get 4-6 tons of groceries from Feeding America at a time.”

He adds with a chuckle that the pantry is always on the lookout for peanut butter and pasta.

“These days we’re filling in with lots of smaller bags of canned goods that people bring, because we don’t know what we’re going to be able to find,” he reports.

Of course, the food pantry relies on its volunteers, and Sandy Robbins, the pantry’s volunteer director, has a crew of 4-5 volunteers each week. Not all of the volunteers are from Lebanon Lutheran Church.

Many are from the community, and the operation could not go on without them. These days the volunteers come in and pack the boxes, and some serve as milk runners with Country Dairy, where the church purchases fresh milk.

Groceries are purchased in bulk quantities from Feeding America unless they experience shortages, in which case volunteers shop at Meijer’s, Walmart and other stores for sales.

There is no charge for clients, and they are not required to provide formal proof of need. They are asked to complete a form provided by Feeding America stating what their income is and the size of their family, but this is all self-reported and those who come are truly in need of this assistance.

In addition, because the church purchases milk from Country Dairy, it asks for a dollar donation for the milk, though no one would ever be deprived if they couldn’t provide this donation.

The food pantry is a $50,000 annual operation (about $1,000 each week), run by a handful of volunteers. Lebanon Lutheran keeps all donations designated for the food pantry in a separate account used only for groceries.

For example, this past month, the church incurred a cost of $800 for the repair of the elevator that is used extensively by the pantry. Ogden clarifies that these costs come out of the church’s budget, and that if donors wish to contribute toward the overhead costs, they should designate their donation for the church’s general fund to be used for these other needs rather than for the food pantry.

Pastor Ogden remarks that he definitely misses the in-person operation of the food pantry.

He says, “The thing I valued the most when we were doing the breakfast is that our clients come to know each other, so there is a tremendous amount of support and encouragement in that.”

“People shared rides with each other, and we opened with prayer so there was a lot of sharing of prayer concerns. It was not just sliding a box into people’s cars. We were able to treat people like they were valued, and there was a community of people who knew and cared for one another.”

In this regard, Ogden shared a story of an older woman who came into the food pantry crying because the sheriff’s department had dropped off her grandchildren at 2 a.m. and had taken her daughter and son-in-law away. She had no idea how she was going to take care of these children.

She needed a changing table, a car seat, diapers and other things for them.

“It was the clients at the food pantry that met the need,” Ogden recalls. “That was amazing.”

But he notes that he has seen this happen over and over. Even though the clients of the food pantry are in financial straits, they know how to do things, so they fix each other’s cars, give each other rides and generally help each other.

These days, with the curbside service, the volunteers and the Pastor do go out and talk to those who come while they’re waiting, and they do learn things about special needs and concerns. But it is not the same as the in-person contact.

It is hoped that the vaccine rates and other factors will enable the pantry to open in person again in the coming year, but Ogden says these decisions are being made month by month.

At this time, church services are virtual, and that will be one of the first things to reopen when in-person events are possible. No specific date for reopening the pantry has been set at this time, but drive-in service will continue in the meantime.