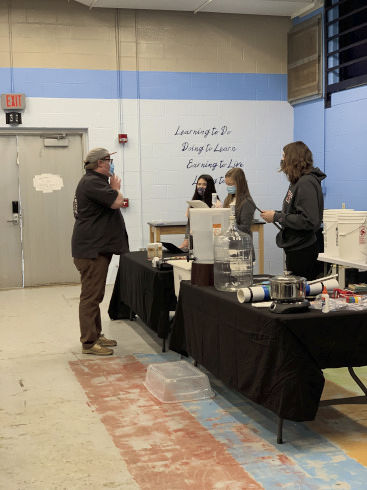 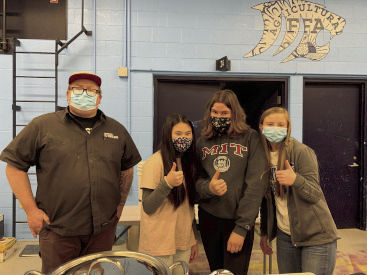 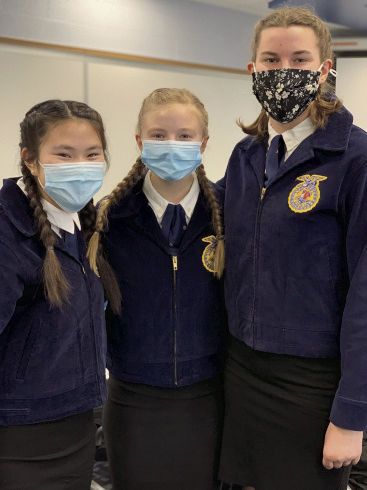 Elita Kennedy, Emma Peterson and Erin Kanaar pose for a photo in their FFA uniforms.

Elita Kennedy, Emma Peterson and Erin Kanaar pose for a photo in their FFA uniforms.

MONTAGUE – This year, a trio of Montague High School students chose to study fermentation for their FFA project.

However, unlike other FFA groups that have studied fermentation in the past, this group of students decided to study how beer is fermented. Emma Peterson, Elita Kennedy and Erin Kanaar decided to reach out to the owners of North Grove Brewers to learn more.

“Every winter we have our leadership contest season, and one of the contests that students are able to compete in is called a demonstration. And so, when we have students select topics for the demonstration, or speech, or whatever it is they’re working on, we really emphasize the research part of it and connecting with community experts,” said teacher and FFA advisor Kate Feuerstein.

Two of the three owners of North Grover Brewers – Jason Jaekel and Billy Darke – were Montague High School FFA members. But the head brewer – RJ Nordlund – was very hands on and helped a lot with the project.

Feuerstein said that there are three types of fermentation: lactic acid, ethanol and acetic acid fermentation. Beer making falls into the category of ethanol fermentation.

To begin with, Peterson, Kennedy and Kanaar were given a tour of the North Grove facility and its equipment. Feuerstein said that up until this point the students only knew the theory of fermentation that they had learned from a textbook.

“So, we first met with them and talked about what we wanted to do. And Jason (Jaekel) actually competed in demo when he was in the FFA. But we had to get RJ up to speed on it,” said Feuerstein.

“And then they took us through a tour and explained each process. Here’s the sanitation. This is why we select ingredients that we do. This is why it moves from this container to that container.

“This is why we monitor our temperature. And this is what is happening when you add your oxygen and what your yeast is doing and how you’re carbonating it. And what all exactly happening.”

After the tour the girls hammered out the details of their project and how they planned on presenting it. They continued to do their research, and Nordlund made himself available to answer additional questions.

“RJ came up to the high school and watched the girls do the demonstration. And he helped us tweak a few things and then just kind of grilled them with questions, said Feuerstein.

In the contest, you have five minutes of questions after you’re done with your demonstration. And so, we’ve been having him kind of grill us with questions”

That grilling paid off, Peterson, Kennedy and Kanaar won their district competition and are now moving on to regionals. But districts weren’t won only on their ability to answer questions, they had to be able to demo the process as well, the only problem is that they are all under the legal drinking age.

So, to demo the process the girls had to get creative. They used a drink cooler to simulate a fermenter and demonstrate the sanitation process.

As for the other parts needed – malt and hops – they used dark Karo syrup and rabbit pellets as stand ins.

“And so, we don’t have any actual products that’s used, because obviously they’re underage. But we still wanted to demonstrate fermentation […],” said Feuerstein.

As part of their demonstration the girls had to relate the project to agriculture. Through their research they discovered that the craft beer industry makes up $469 million of Michigan’s gross state product.

“That includes all the feeder businesses like containers, label makers, trucking, shipping, graphic design in those sorts of things. […] It also creates about 9,800 jobs for Michiganders, said Feuerstein.

“And so, you have people who are growing any type of grain and barley and rye and wheat that would be used for any type of flavoring that you would wanna make. So that’s kind of where the real connection started.”

With the girls moving on to regionals they will look to expand the presentation further and utilize Jaekel next as a resource. In addition of being part owner of North Grove Brewery, he also is a hops farmer.