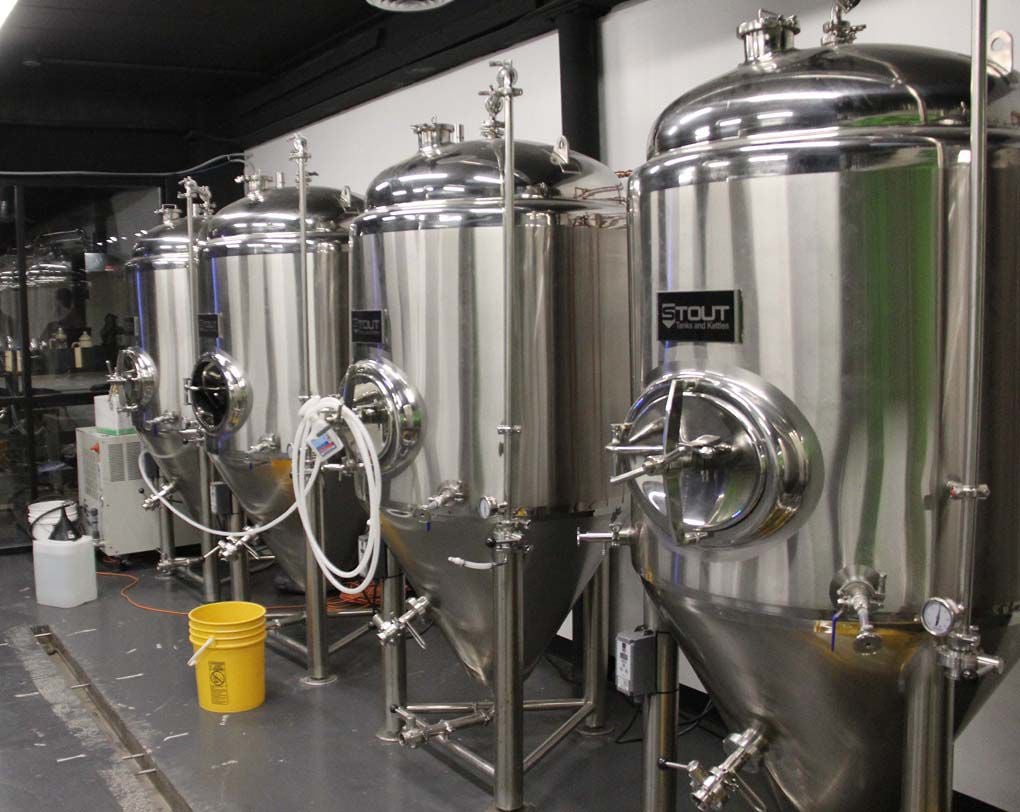 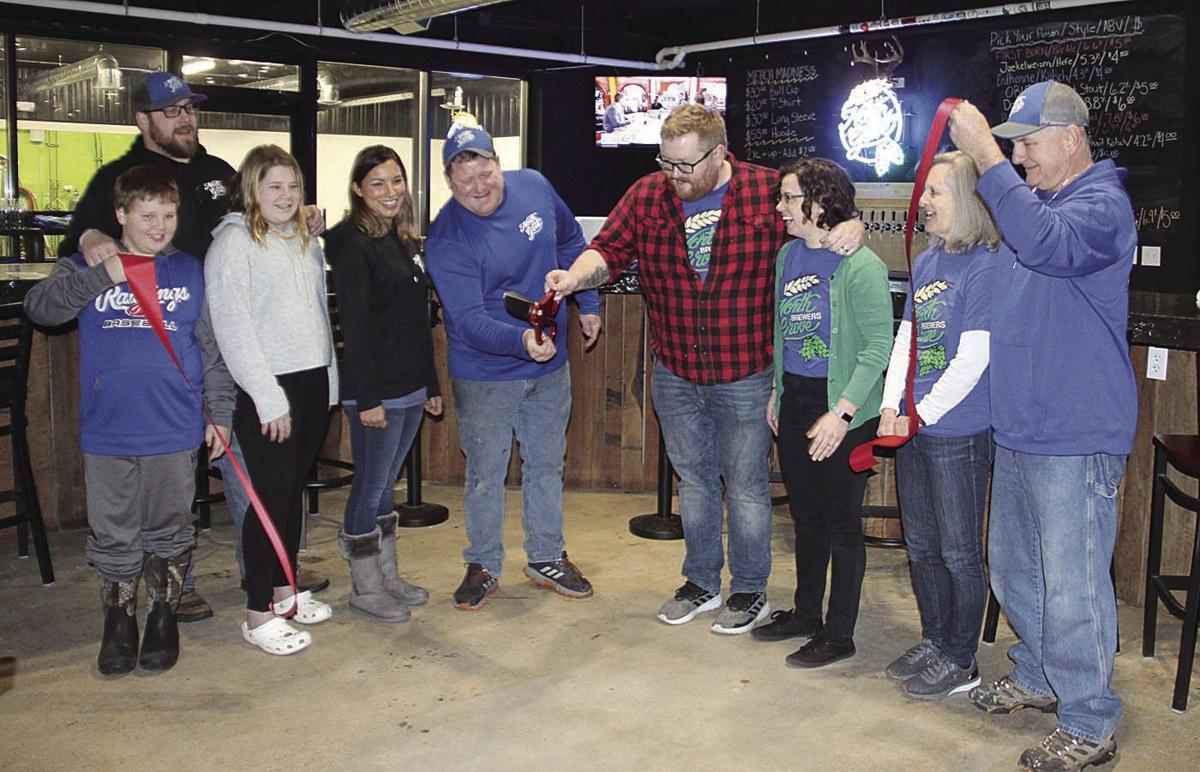 A panoramic view of North Grove brewers during their morning ribbon cutting ceremony on Wednesday, Jan. 15 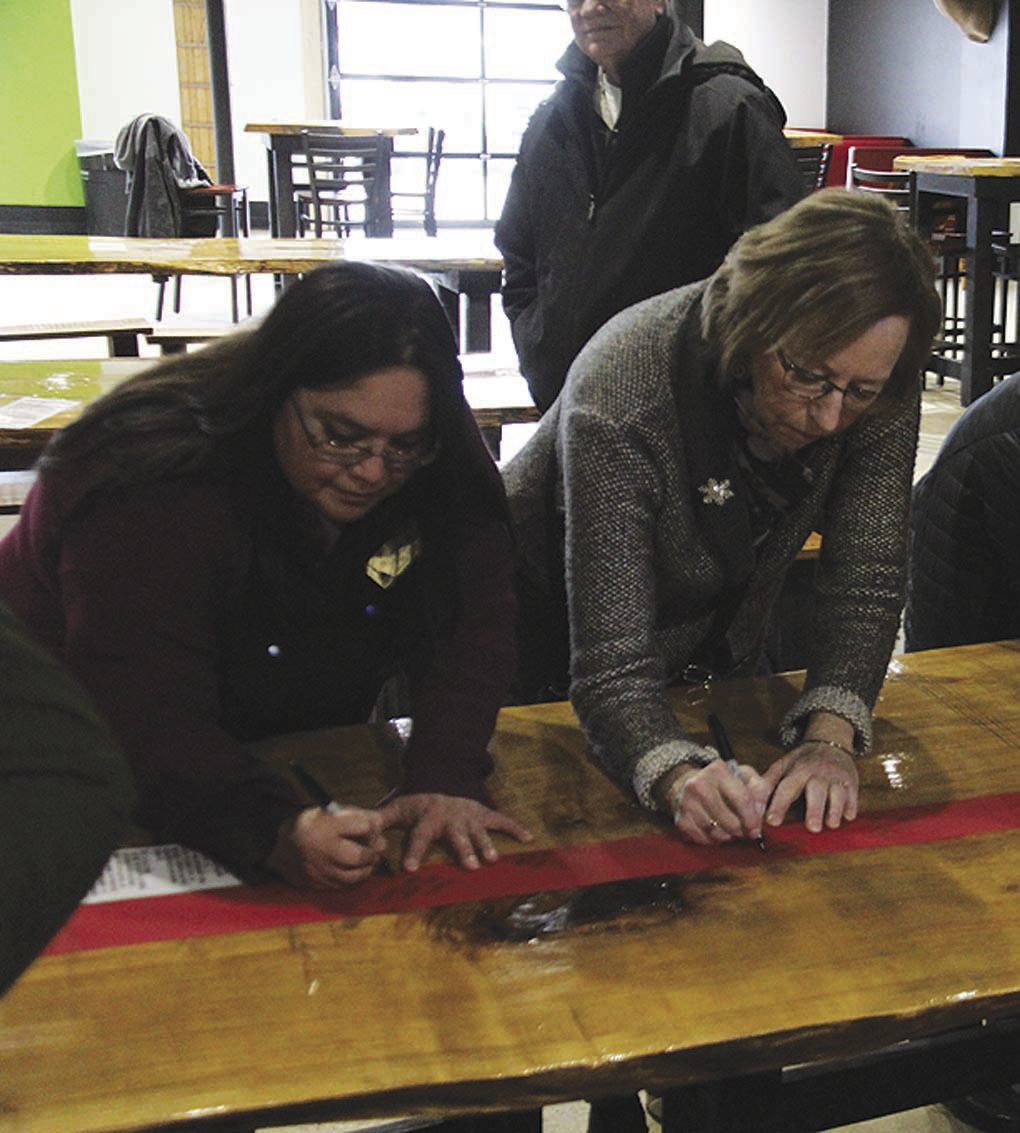 Susie Rodrigruez and Leslie Salter sign the ribbon that was cut at the grand opening of North Grow Brewers. Rodriguez was acting as the representative for State Sen. John Bumstead.

A panoramic view of North Grove brewers during their morning ribbon cutting ceremony on Wednesday, Jan. 15

Susie Rodrigruez and Leslie Salter sign the ribbon that was cut at the grand opening of North Grow Brewers. Rodriguez was acting as the representative for State Sen. John Bumstead.

MONTAGUE – The name Nordlund is Swedish, and when translated means North Grove. Thus was the inspiration for the name North Grove Brewers.

Nordlund also happens to be the last name of the brewery co-owner RJ Nordlund.

The newly opened Montague brewery held a ribbon cutting on Wednesday, January 15, marking the grand opening of the business. Later in the evening the celebration continued with musical act Feed The Dog performing at 7 p.m.

Co-owner Jason Jaekel, North Grove Brewery, said he and his business partners were so eager to open that they held their soft opening the same day they received their licensing.

“Funny story — I drove to Lansing (on Wednesday, Jan. 8) to pick up the license, that’s how bad we wanted to open,” said Jaekel.

Jaekel and Nordlund co-own the brewery with two other people: Billy Darke and Greg Peyer.

Nordlund, who is the brewmaster, has worked at both Founders Brewing Co. in Grand Rapids, and Fetch in Whitehall. Previously, he worked as the brewmaster at Bare Bones Brewery in Oshkosh, Wisconsin.

Nordlund said he first started dreaming of opening his own brewery in 2012. Working at Founders inspired him to eventually open up a place he could call his own.

“Once I started working at Founders and really got a taste of the industry — that is when I knew that someday I was going to (open a brewery),” said Nordlund.

While working at Bare Bones Brewery, Nordlund had developed a business relationship with Jaekel back in his hometown. Jaekel, co-owns a hops farm called the Hops Yard.

Jaekel also leases and manages the Montague Dog-n-Suds with his wife, Misty.

“There was a hops shortage back in 2013. I and my other business partners were sitting around drinking some beers (in 2012), and we were like, we really want to take advantage of this growing craft brew industry,” said Jaekel.

Nordlund was a customer during his time spent in Wisconsin, but was purchasing all of his hops from Jaekel back home. Nordlund expressed an interest in opening a brewery during a conversation the two had. Jaekel said he was also interested, but only if it was in Montague.

“I was like, ‘I wanna open a brewery.’ He was like, ‘I do too, but I want to open your brewery here in Montague,’” said Nordlund.

Nordlund had already been working on a business plan, but moving back to Montague seemed like a no-brainer

The LLC was purchased in March of 2018, and the building was later secured that April. Since then it has been a long process with the construction, installation of equipment and getting required licensing.

North Grove Brewery is outfitted with a five barrel stout tank system, five barrel fermenters, and a unitank fermenter. Nordlund said everything is made out of stainless steel.

North Grove features nine beer flavors, and one cider. They plan to rotate their flavors to keep things fresh. Nordlund said they have no plans to distribute beer.

“Every time I’ve gone somewhere my responsibility has grown. I’ve picked things up, I learn here, I learn there. I was running Bare Bones Brewery in Oshkosh, Wisconsin. There I was the brewmaster, I did the whole thing, I ran the whole production, dealt with distribution, and did all that stuff,” said Nordlund.

He learned during this time of his life that distribution is a headache to deal with.

“We want to make this a destination. You have to come here and get everything here. Plus I’m not a big fan of distribution, you have to invest a lot more into equipment. You gotta be making a lot more product to make money back when you’re distributing,” said Nordlund.

North Grove does have the ability to can beers at a small capacity. Nordlund said he may do small runs of canned beer only available at the brewery.

In addition to beer and cider, North Grove Brewery is also offering food. They serve deli style sandwiches, salads, and starter plates. For entertainment they have installed a jukebox, a pool table, dart boards and a pool table.

They hope to continue to offer more entertainment options with arcade video games, and in the warmer months, starting an outdoor corn hole league.