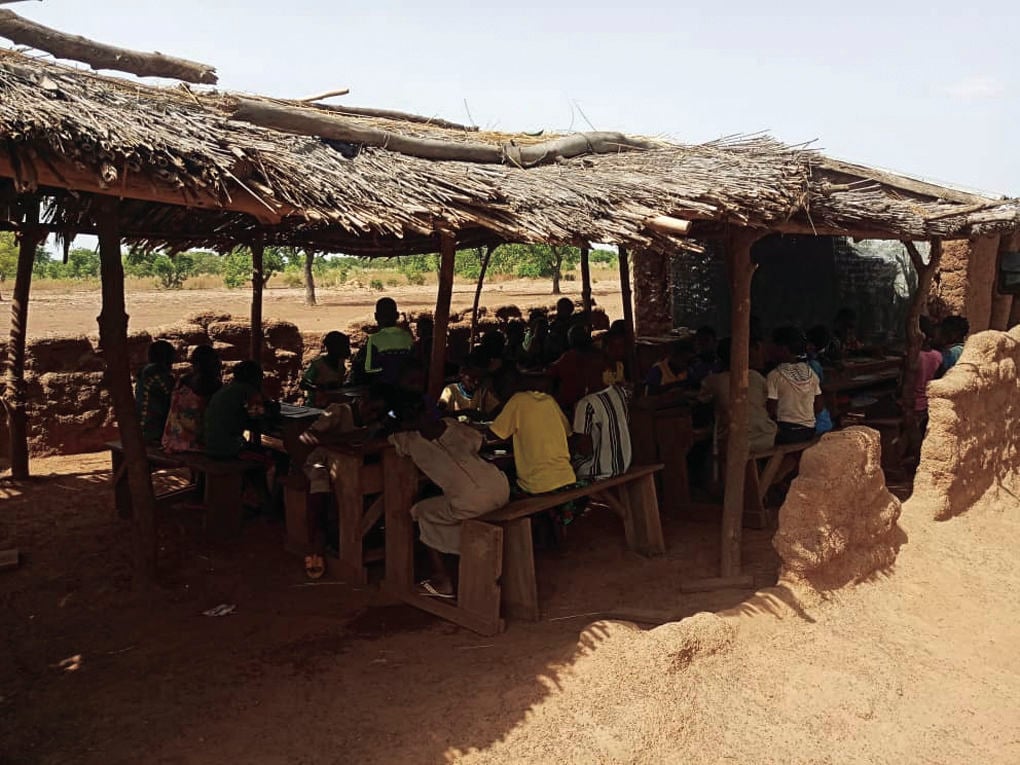 Children study at the old school in the Village of Bogaré in Togo. 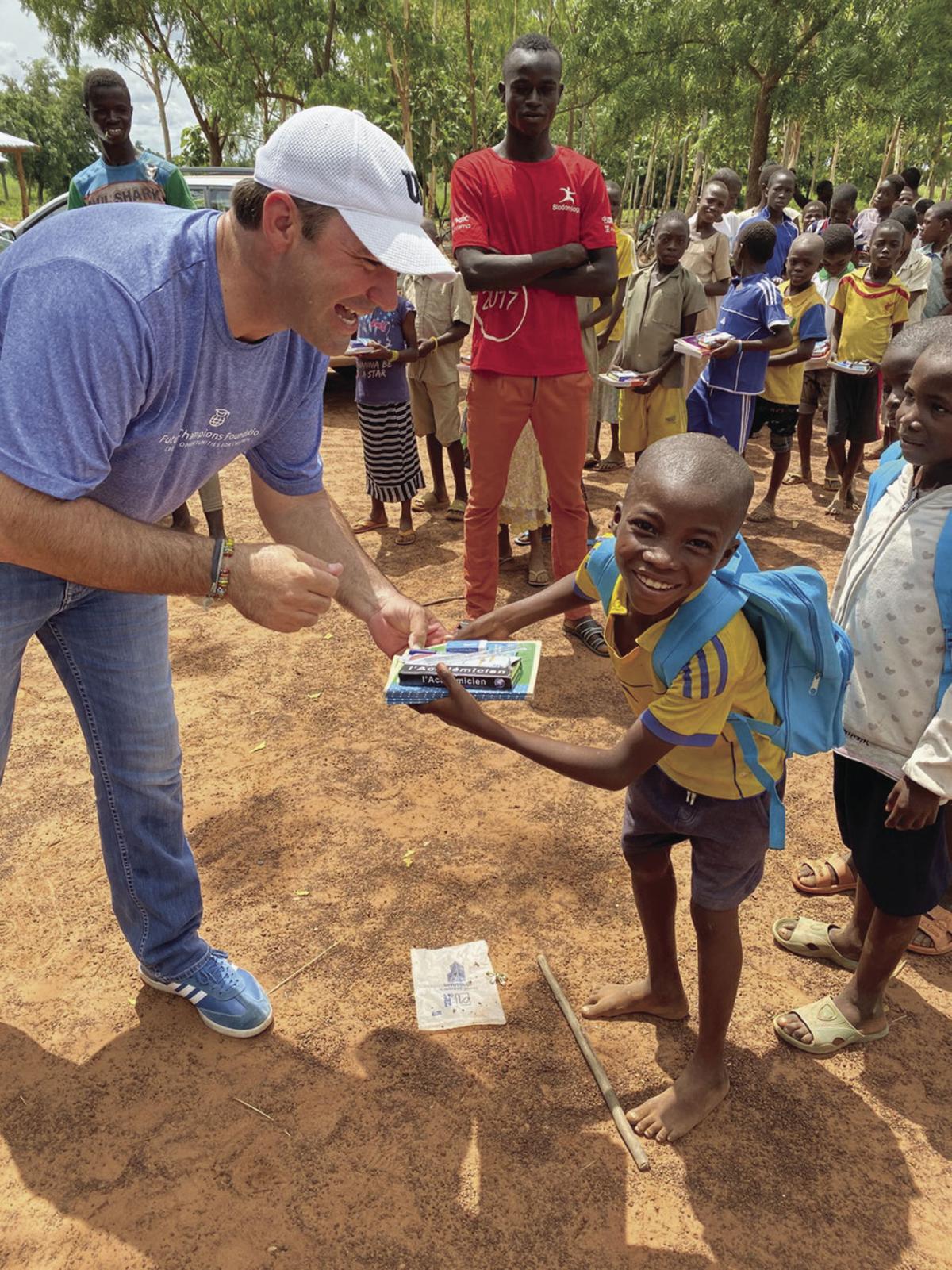 Adam Jasick passes out school supplies to a happy child. Jasick is in the process of constructing a school for the children of Bogaré. 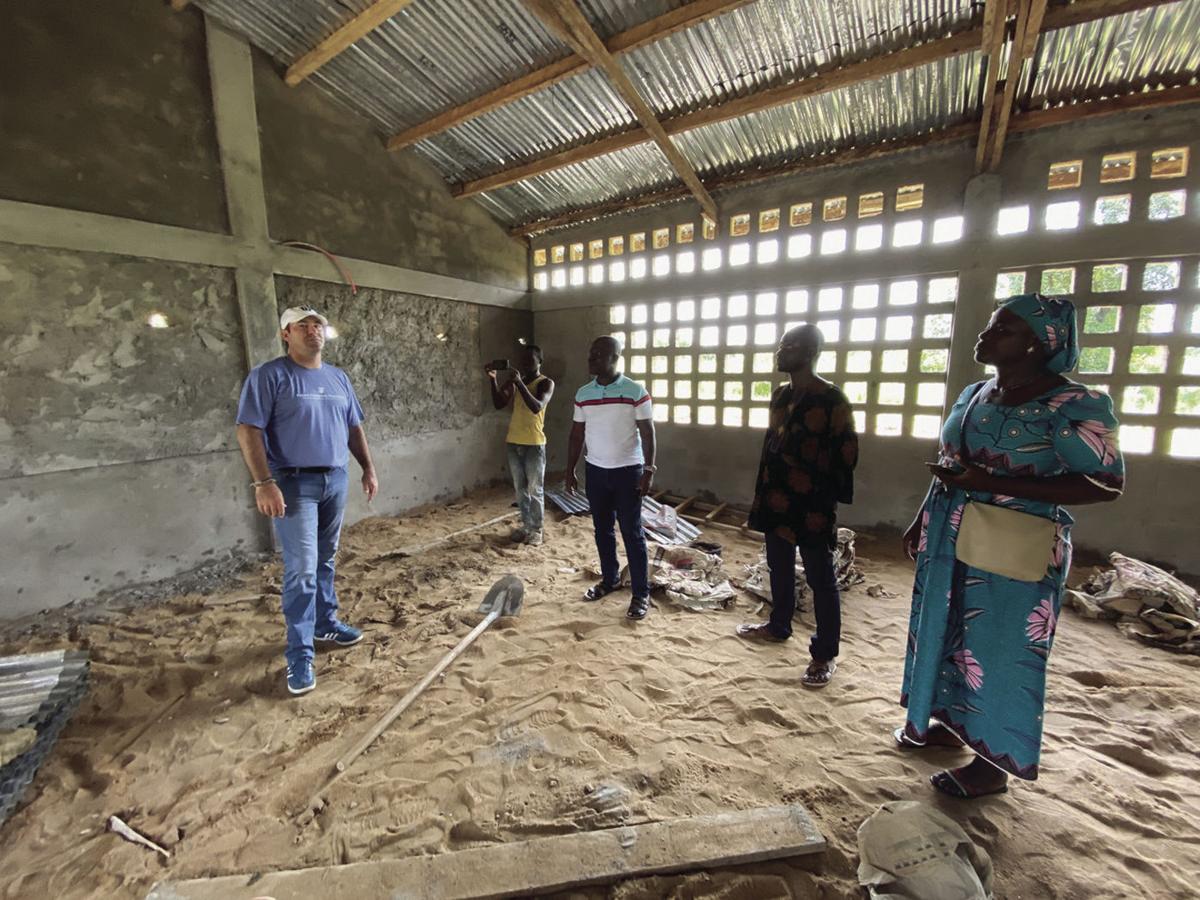 Jasick tours the inside of the new school he is in the process of building. 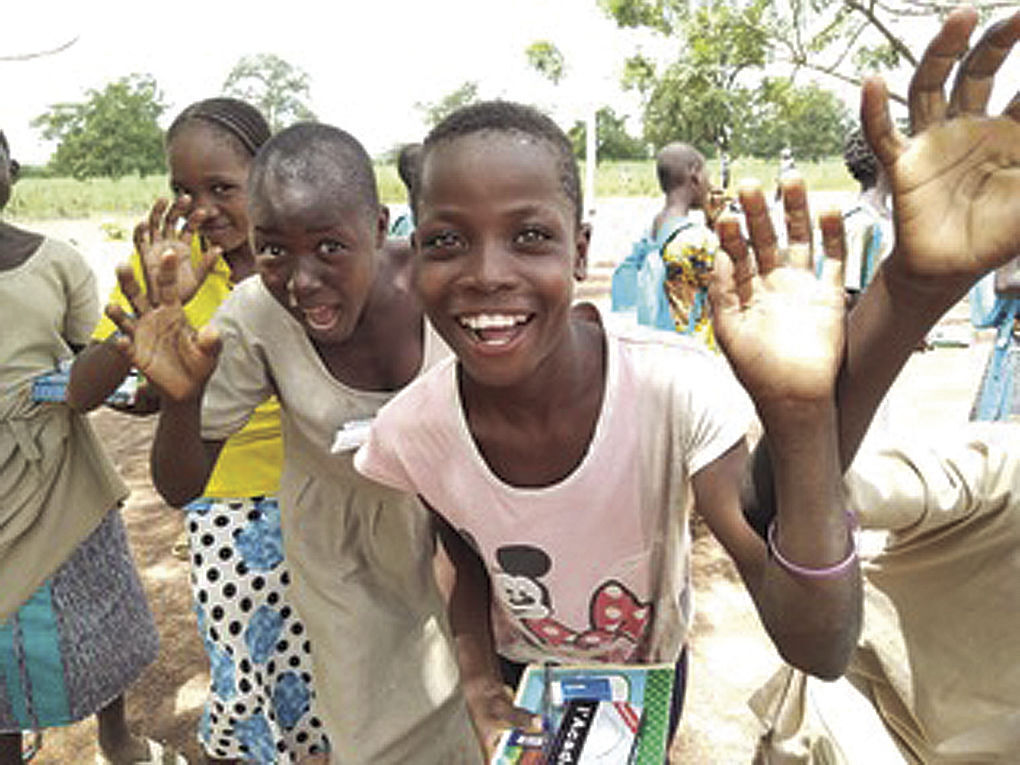 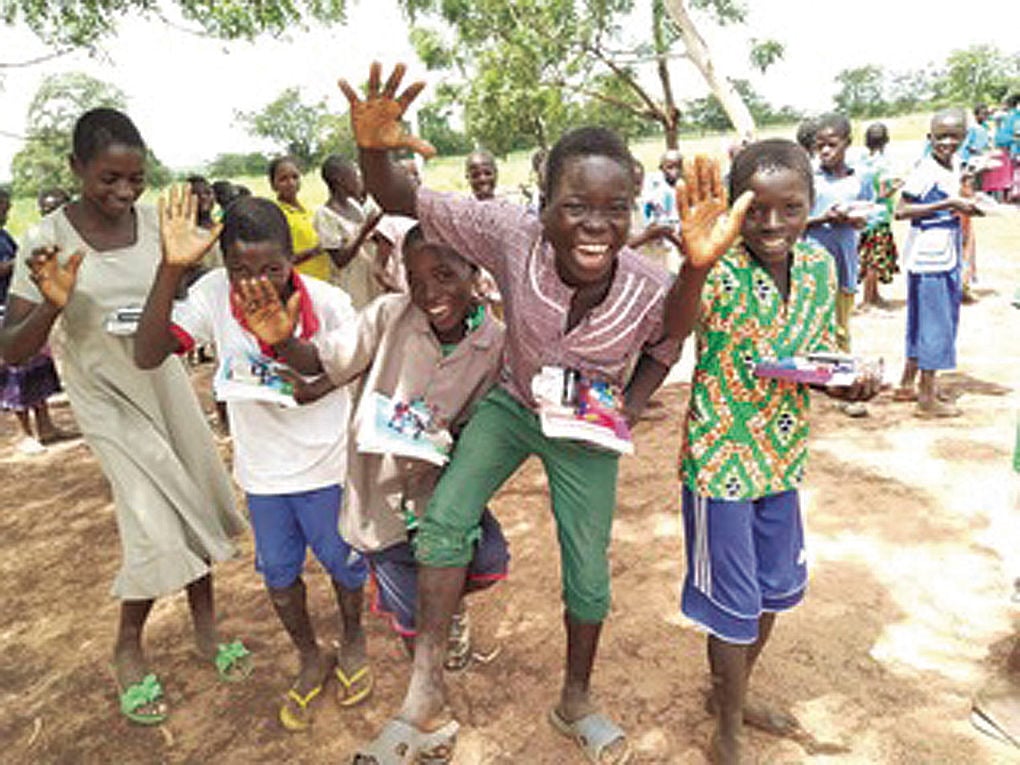 More kids hamming it up for the camera after receiving their school supplies.

Children study at the old school in the Village of Bogaré in Togo.

Adam Jasick passes out school supplies to a happy child. Jasick is in the process of constructing a school for the children of Bogaré.

Jasick tours the inside of the new school he is in the process of building.

More kids hamming it up for the camera after receiving their school supplies.

TOGO – Adam Jasick may have grown up in the small rural town of Whitehall, but he has now worked in 45 countries.

He played tennis at Whitehall High School, where he graduated in 1997, and at Grand Valley State University, but now he has been recognized internationally as the 2019 Volunteer of the Year for the Professional Tennis Registry, the largest tennis teaching professionals organization in the world, and as the 2020 Humanitarian of the Year for that organization.

His earliest philanthropic work was riding his bike to raise money for the St. Jude’s Bikeathon as a boy, yet today he is founder of the Future Champions Foundation that is building a primary school in the Village of Bogaré in northern Togo in West Africa.

So, how did a young local boy become a tennis professional and establish a foundation whose mission is “Creating opportunities for children to become champions in their own communities?”

According to Jasick’s mother Cathy, Adam was always highly motivated. When he rode in the St. Jude Bikeathon in the second and third grades, he always rode the farthest and longest and raised the most money.

“He’d have ridden forever,” she laughs.

Adam himself jokes that his dad had to apologize when they went to collect from sponsors after the Bikeathon, because Adam rode so much farther than anticipated. Later, Jasick was responsible for running the event.

“His charitable heart started there,” his mom recalls. Adam Jasick went on to serve as a Big Brother and a peer mentor for younger children.

From these early roots, Adam Jasick went on to coach tennis and serve as a consultant, writing developmental programs for kids’ tennis internationally.

While he was delivering a course here in the U.S., he met a woman from Togo who had come to play tennis and participated in his training program. When she asked if he had any equipment to donate, he cleaned out his garage and sent off what he had, while asking if there was anything else he could do.

She sent pictures of the kids in Togo playing tennis in the grass and he proposed building courts for them; however, she indicated that if he built a concrete pad the villagers would just put buildings on it. Instead, she proposed that the greatest impact would be to build a school.

Though he initially felt that was probably a project beyond his abilities and means, he was provided a construction bid proposal for just $28,000 and thought it was worth pursuing. Ultimately, he bought flights and requested to meet with school officials, the head of the construction company, the head of the power company, and other local people of influence.

Using a translator who had gone to school with the woman from Togo he had originally met, he visited Bogaré and fell in love with the village and the people there, all of whom came out to greet his visit.

The village elder presented him with a gift of three ears of corn, three yams and three guinea fowl; which Jasick assumed had some significance, but he was greatly moved when told that this gift represented all the man had.

When he learned that the original $28,000 bid was for a mud building, he felt this was not sustainable and requested a bid for a concrete and steel school, including bringing in power and water. This bid was for about $170,000 – cheap by U.S. standards.

Jasick then proceeded to form the Future Champions Foundation to raise money to support the project.

Today, the building is nearly complete and the goal is to open the school in October. Though power and water will not yet be available at that time, the Foundation will continue to raise money and work on the logistics for getting this access, while paying Village women to bring water from an hour and a half away.

The school will be named the Dennis Van der Meer Early Education Center after the founder of the Professional Tennis Registry and Jasick’s own mentor, who was hugely influential in his life.

“It is an absolute honor and fitting tribute to him,” Jasick says.

Jasick readily acknowledges that he had no expertise in building a school.

“My thing is that there is always a risk in stepping out of your comfort zone and trying to do something different. There’s nothing that makes me think I can get big things done, but I’m willing to take the time to figure out how to do what needs to be done,” Jassick explains

“It takes a willingness to stumble through.”

Finding solutions has become his mission, including how to get donated solar panels into a container and then to Togo. And how to get donations in French for the library space.

Nevertheless, as he says, he has stumbled through because, “I’m keenly aware of the privilege I grew up with and continue to have, and feel I should use that to spread privilege to others. Togo is one of the 10 poorest counties in the world, and people there make less than $400 a year. U.S. dollars go further there, so that we can have an effect on children who, without help, have no chance of being more productive or pushing the community forward.”

While he is humble about his own personal involvement in establishing the school and the Foundation, he is proud of what the Foundation has accomplished for this project. Unlike many philanthropic organizations, the Foundation has no employees and minimum administrative costs. 96-percent of funds raised in 2019 went directly to supporting the mission of the Foundation.

Jasick has been managing a tennis club in the Catskills this summer, but he will be spending the winter working on the Foundation, solely on a volunteer basis.

“My greatest satisfaction,” he emphasizes, “is creating opportunities for kids to lift their limits on possibility, to make decisions on their own – who they want to be and where they want to go in their lives. It’s all about options, and all projects we as a Foundation do are based on that concept,” said Jassick.

With the new school opening in October, he will be working to secure the financial position of the Foundation and to determine what will be sustainable in perpetuity for the school project and the annual cost for its ongoing maintenance and operation.

“Asking people for money is a humbling experience,” he says, but this son of Whitehall has found a way to make a difference.

“I’m just doing what I can,” he declares. “I may not solve the problems of the world, but when something comes around that my skills lend themselves to, I try to find a way. If I can help make the world better, even for a small number of kids, what more can I ask?”

Anyone wishing to make a donation to the Future Champions Foundation should go to the website at future-champions-foundation.org, where there are also interviews with Jasick and other information about the school and the Foundation’s goals.