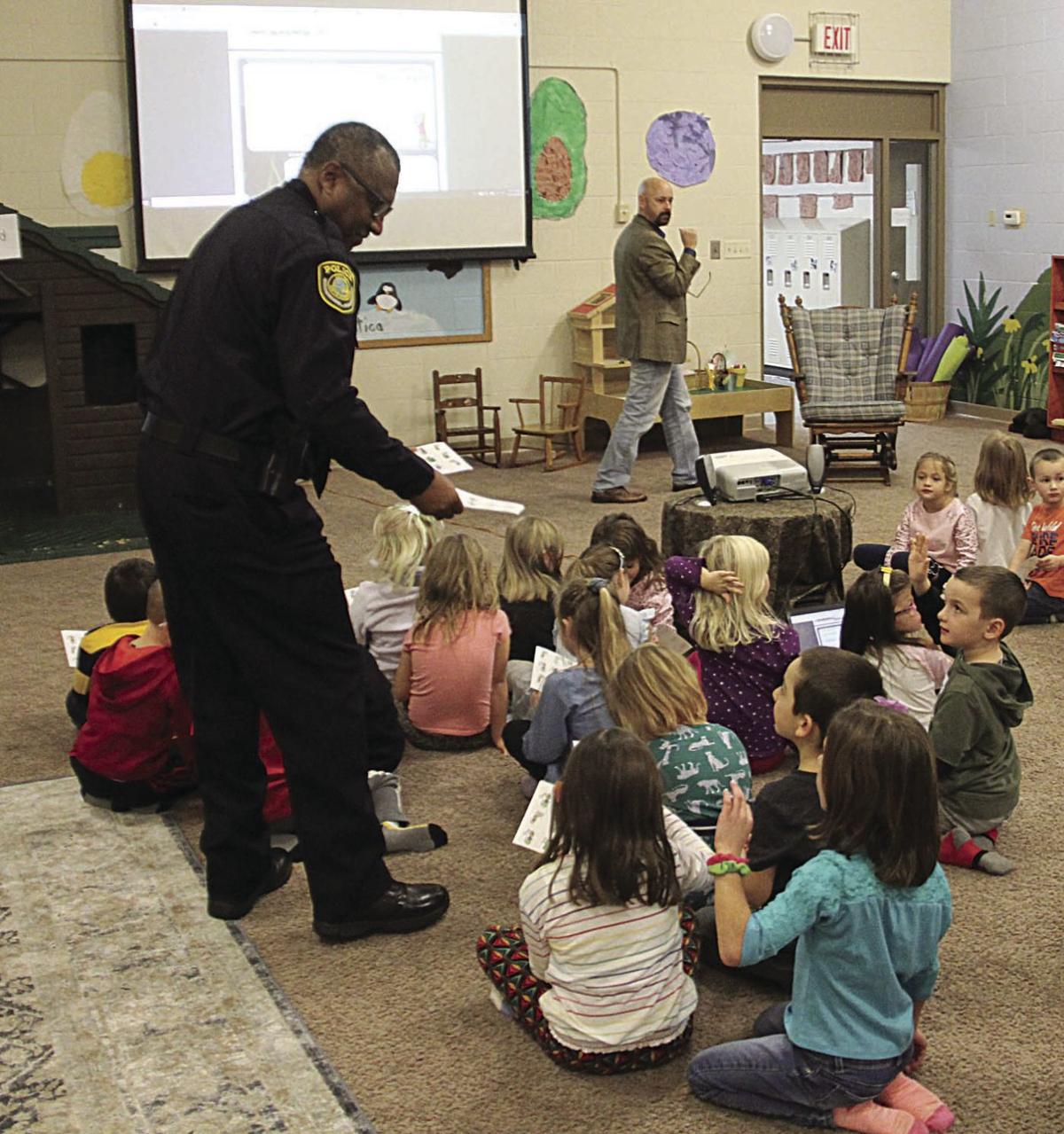 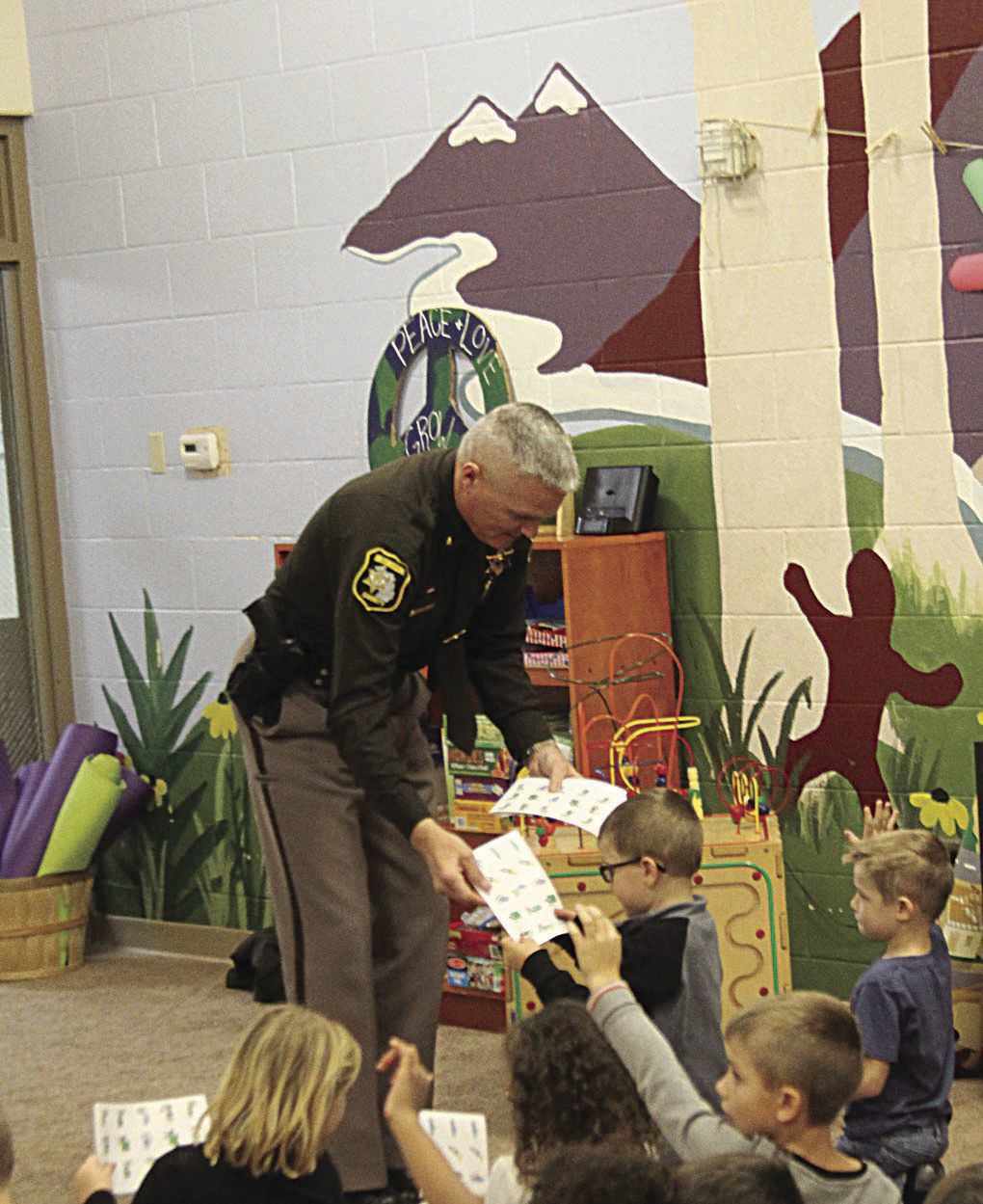 Muskegon County Sheriff Michael Poulin hands out stickers to a group of kindergartners on Thursday, Nov. 14. Poulin introduced the first episode of the ProtecToons series to the students at Pennsylvania Elementary School. The cartoon deals with school violence and what to do. They were produced by Wheeler Creative Studios.

Muskegon County Sheriff Michael Poulin hands out stickers to a group of kindergartners on Thursday, Nov. 14. Poulin introduced the first episode of the ProtecToons series to the students at Pennsylvania Elementary School. The cartoon deals with school violence and what to do. They were produced by Wheeler Creative Studios.

The Rocketoon Read-Along Program is done in conjunction with Tim Wheeler, Wheeler Creative Studios, the creator of the “Rocketoons.”

The program launched earlier this month at the Reeths-Puffer and North Muskegon school districts.

“Rocketoons” launched, in 2017, the idea being a more recent take on the popular “Schoolhouse Rocks!” series of cartoons from the 1970s. But instead of focusing on history and civics, Wheeler’s cartoons deal with social and emotional issues that kids have to deal with in a school setting.

“Rocketoons” originally dealt with topics such as bullying, divorce, and the stress of moving to a new school district. However, with nearly three years of cartoons now behind Wheeler, he has expanded the brand and created two new series.

During the Cold War there was a looming terror that the Soviet Union could bomb the United States if things went wrong politically with the nuclear super power. Students were trained during this time to take cover underneath their desks in the event of an aerial strike.

However, in the 21st century, there is a very real threat of school violence. School districts now have to take into consideration the possibility of a school shooting occurring on their campuses.

According to the online publication Education Week, in 2018 there were at least 24 school shootings to happen across the nation.

What once seemed like an oddity, is now an issue all schools must address. Locally, violence has been an issue inside Muskegon County with a school shooting happening as recently as 2016 after a Muskegon Heights High School basketball game.

That’s where Wheeler’s newest series “ProtecToons” comes in. The series deals with school violence, and what to do when a situation occurs. It is geared toward kids who are elementary age.

On Thursday, Nov. 14, both Muskegon County Sheriff Michael Poulin and North Muskegon Police Chief Edward Viverette introduced the first episode of the ProtecToons to kindergartners at Reeths-Puffer’s Pennsylvania Elementary School. This was the second time the cartoon had been presented in a classroom setting.

“The ‘ProtecToons’ is a way for law enforcement to communicate with our youth. I am really talking about our elementary age youth. Kind of about school safety and what they need to do protect themselves,” said Poulin.

“We are able to communicate with them in a way that they understand, and conceptually get what is going on. Without traumatizing them further.”

“This allows us to introduce a lot of scary topics in an age appropriate scenario. This just extends the relationship we have with the school districts, that we are actively engaging the school districts on day one of everything,” said Viverette when discussing the new Read-Along program.

As part of the Read-Along program Wheeler distributed books to the student, as well as fun stickers with some of the “Rocketoons” characters on them.

The genesis of the “ProtecToons” began last year after Wheeler was invited to attend a superintendents meeting at the Muskegon Area Intermediated School District (MAISD). Wheeler came as guest of Reeths-Puffer Superintendent Steve Edwards. The focus of the meeting was school violence and how to protect students.

Training teachers and administrators on what to do during a violent incident is one thing, but Wheeler walked away wondering who was going to train the students.

Wheeler began working on the new series, and consulted with the Muskegon County Deputy Scott Foster. Foster works as the technical advisor for the “ProtecToons” series.

“When we started working on these I started reaching out to my network of people I know. I said, ‘Does anyone know a police officer who’s passion is kids?’” asked Wheeler.

“A friend of mine said you gotta get a hold of Scott. So I e-mailed him. He said, ‘My friend told me what you are doing — I’m in.’”

However, law enforcement isn’t limited to just using the “ProtecToons.” They also have access to the original “Rocketoons,” and the series “Louis Ray Finds His Way.” According to Wheeler, Louis Ray is a series that deals with the subject of grief, and what it means to lose someone in their life.

The Louis Ray series was created for all students who may experience a loss. However it can work as an adjunct to the “ProtecToons” series. Wheeler said police officers will experience death, and unfortunately they will come into contact with children who have lost people to violence.

The series gets its name from one of Wheeler’s close friends Michael Ray Welch. The main character of the series Louis Ray is a combination of Welch’s middle name and a nickname he had growing up.

“Louis Ray is based off of a childhood friend of mine, Mike Welch. He is someone I’ve known since I was three, and unfortunately Mike passed away,” said Wheeler.

Wheeler said he originally told Welch about the idea during a lunch they had together in their hometown of Stevensville. Welch liked the idea and decided to pay for six episodes of the series.

“He said, ‘That’s the one, because my kids are going to need it,’” said Wheeler, who at that time already knew Welch was sick.

“Rocketoons,” “ProtecToons,” and “Louis Ray Finds His Way” are all completely free for people to watch online. The cartoons have been viewed in 31 states, and five territories and provinces in Canada.

Wheeler said both Poulin and Viverette have been singing the cartoons praises, and have shared them with other law enforcement agencies in the state. He said Viverette has even expressed an interest in introducing “Rocketoons” to his church group.

To view the cartoons visit: www.rocketoons.com.