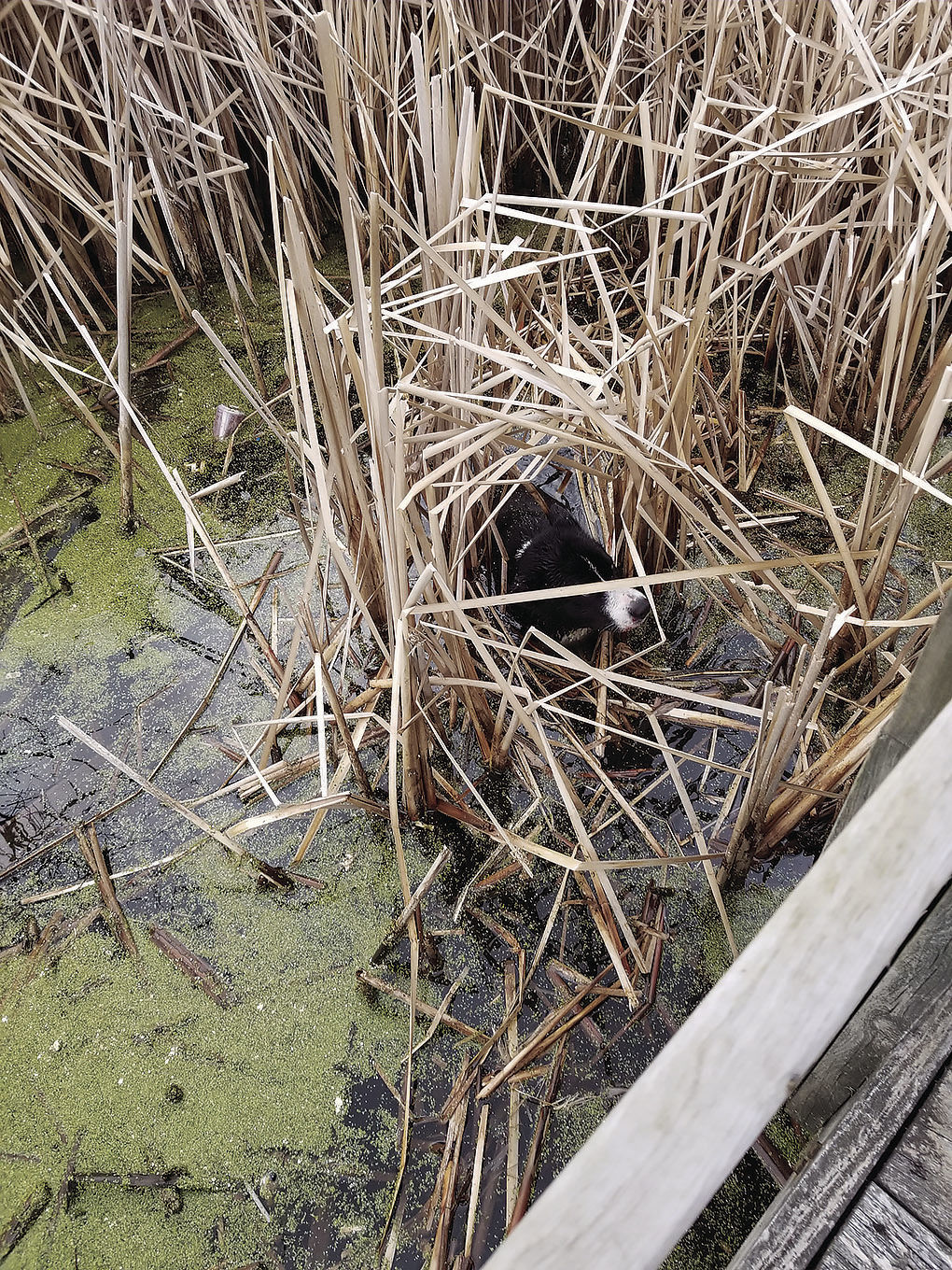 This dog is standing in the water below the boardwalk by the Montague boat launch. 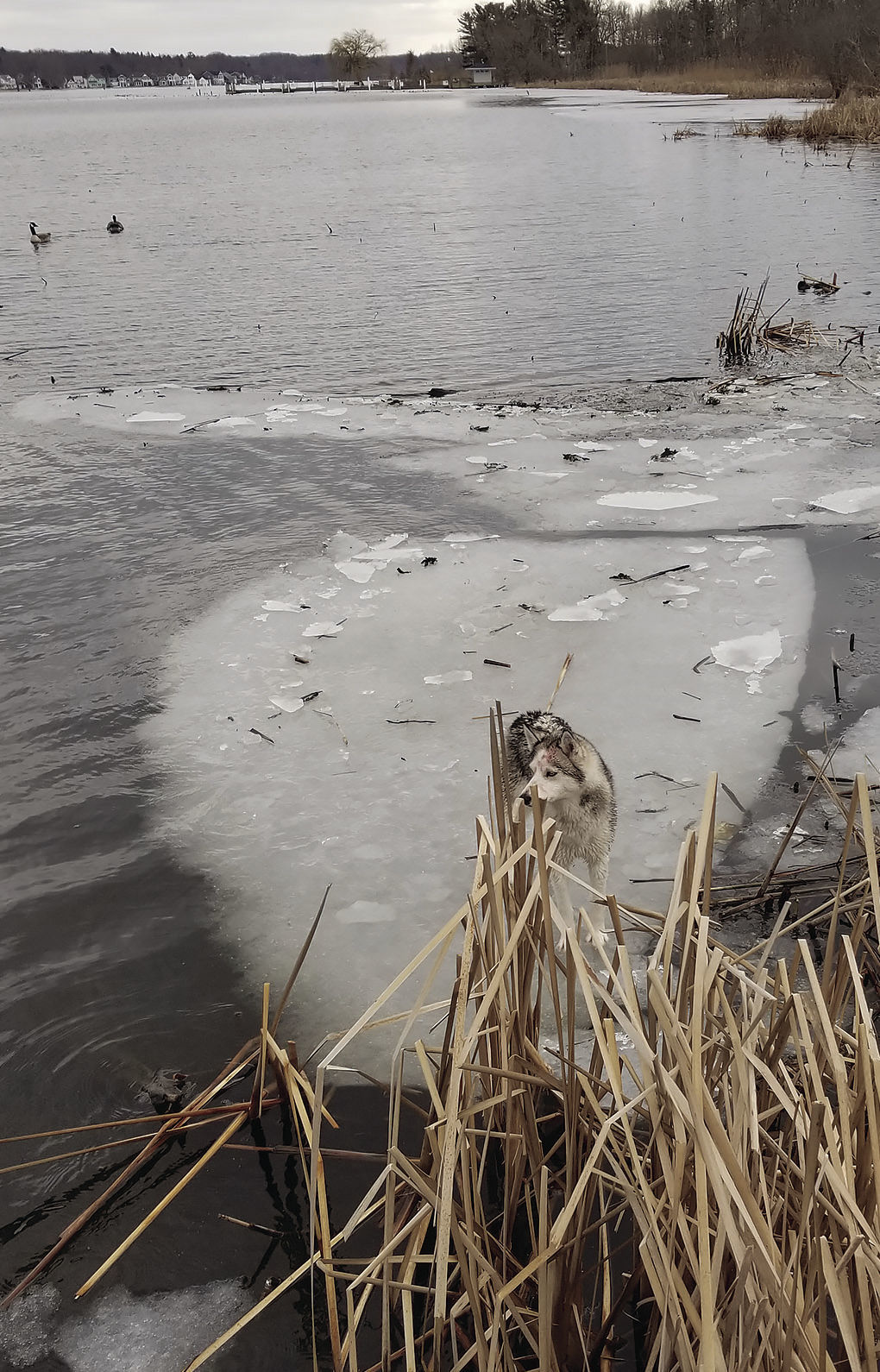 This dog was standing on an ice floe off the shore near the Montague boat launch boardwalk. The owner, wearing waders, walked out to rescue his dog.

This dog is standing in the water below the boardwalk by the Montague boat launch.

This dog was standing on an ice floe off the shore near the Montague boat launch boardwalk. The owner, wearing waders, walked out to rescue his dog.

• Shortly after midnight an officer on patrol observed a vehicle with an expired Texas license plate. The officer initiated a traffic stop in the 3000 block of Colby Street and made contact with the driver. The Muskegon woman asked why she was being stopped but admitted that she knew the plate expired in 2018, that her license was suspended, and that she had no insurance on the vehicle. A computer check also showed that the 28-year-old was wanted for failing to appear in court for offenses in Muskegon Heights, Fruitport and Muskegon County. The suspect was taken into custody and lodged at Muskegon County Jail and also cited for DWLS.

• A Whitehall resident was arrested on an outstanding warrant after being stopped at 10:54 p.m. The 60-year-old was riding a bicycle without a headlight in the 1200 block of Colby Street. When checking the man in the computer it was found he was wanted for driving on a suspended license. He was taken into custody and later lodged at Muskegon County Jail.

• At 5:22 p.m. Whitehall police were called to the 100 block of N. Baldwin St. on a possible domestic assault. When officers arrived they located a couple that explained they were upset and disappointed over not getting an apartment they were hoping to rent. There was no assault and no further action was taken.

• Whitehall Police responded to the 100 block of N. Livingston St. on a report of an unwanted guest. The caller reported that a former resident had returned and was trying to force their way into the home. It was also reported the suspect was intoxicated. When officers arrived at the 3:52 p.m. call the offender had already left and no further action was taken.

• A larceny was reported to Whitehall police by a resident of the 400 block of S. Mears Ave. The victim stated that he noticed his debit card and some cash was missing from his room and that later the debit card was back in its place. Checking his online account, the victim found that it had been used for a purchase in the 200 block of Colby Street. A suspect, who also resided at the home, was identified and later questioned. The suspect admitted to the theft and when the victim was informed, the victim did not wish prosecution. No further action was taken.

• Whitehall Police responded to a disturbance at 1:40 p.m. The caller reported that earlier in the day, while riding her bicycle, she was in a near collision with a vehicle in the 1200 block of Colby St. Shortly after the incident she met the vehicle driver in the hallway of the building. According to the caller the man began to shout and cursed at her and used a racial slur. After a neighbor intervened the woman went outside to call police. Officers spoke with the suspect who admitted he had behaved poorly yet he soon became angry at the officers as well. He was warned not to have contact with the victim again. No further action was taken.

• An officer on patrol observed a vehicle driving erratically on Lake Street and initiated a traffic stop which led to the arrest of the driver. The officer first observed a vehicle near the trestle at 10:45 p.m. and made the stop in the 1800 block. While speaking with the 53-year-old driver the officer noted signs of intoxication and had the driver perform sobriety tests. After the subject had failed sobriety tests he refused to take a PBT. The Fruitland township man was arrested for Operating While Intoxicated and taken to the Muskegon County jail where a breath test was offered but he again refused. A search warrant was obtained and a blood sample was taken from the suspect to be tested at the Michigan State police crime lab. The suspect was lodged at the jail.

• Officers were called to the 400 block of S. Mears Ave. to mediate a dispute between residents of a group home. The caller reported that he was being threatened by one of the other residents of the home because they believed he had stolen body spray. The officer responding to the 4:38 p.m. call did speak with both and warned them to avoid each other for the rest of the evening. There was no theft and no further action was taken.

• At 11:16 p.m., a 22-year-old Montague man was arrested in the 5300 block of Wilcox St. on a felony warrant for dangerous drugs out of Ohio. He was lodged in the Muskegon County Jail.

• Montague Police assisted a Montague resident in rescuing his two dogs from the icy water of White Lake. At 4:30 p.m., a pedestrian walking the boardwalk at the Montague boat launch reported seeing the dogs, one in the water among plants and the other standing on an ice floe near at the shoreline. Police Chief Robert Rought said the dogs’ owner contacted police earlier that day to inform them their dogs got loose from their home on Anderson Road and ran off. Rought was able to retrieve the dog closest to the boardwalk. The owner, wearing waders, rescued his dog from the ice floating in water up to the owner’s chest. Rought said the owner was grateful for the help of the pedestrian and police in helping the dogs to be rescued.

• At 11:26 a.m., burglary: entry without authority and damage to property was reported in the 100 block of E. Kenwood Blvd., Lakewood Club.