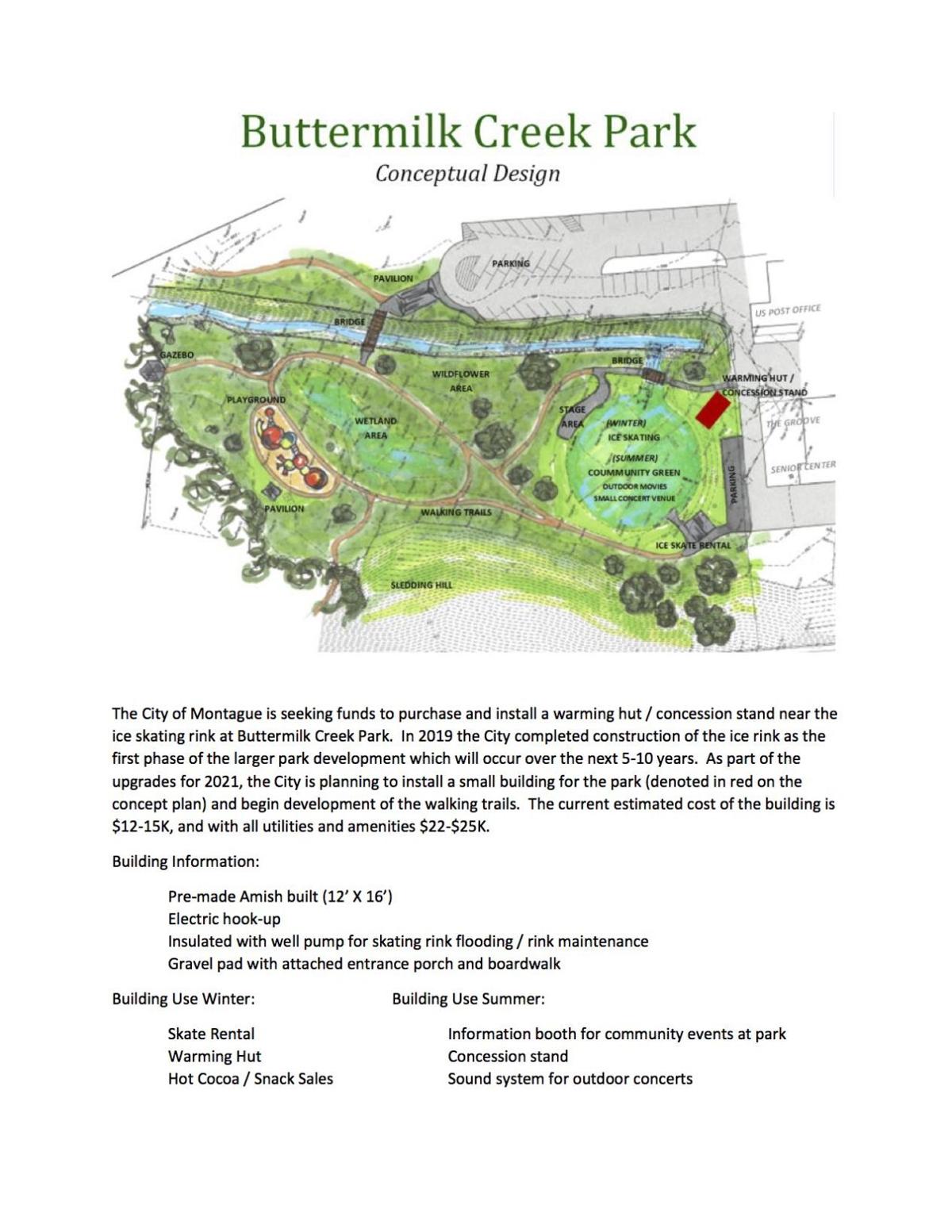 This conceptual design of Buttermilk Creek Park shows the location of the current skating rink and sledding hill, and the future locations of a concession/warming/maintenance building, walking trails, playground and gazebo. 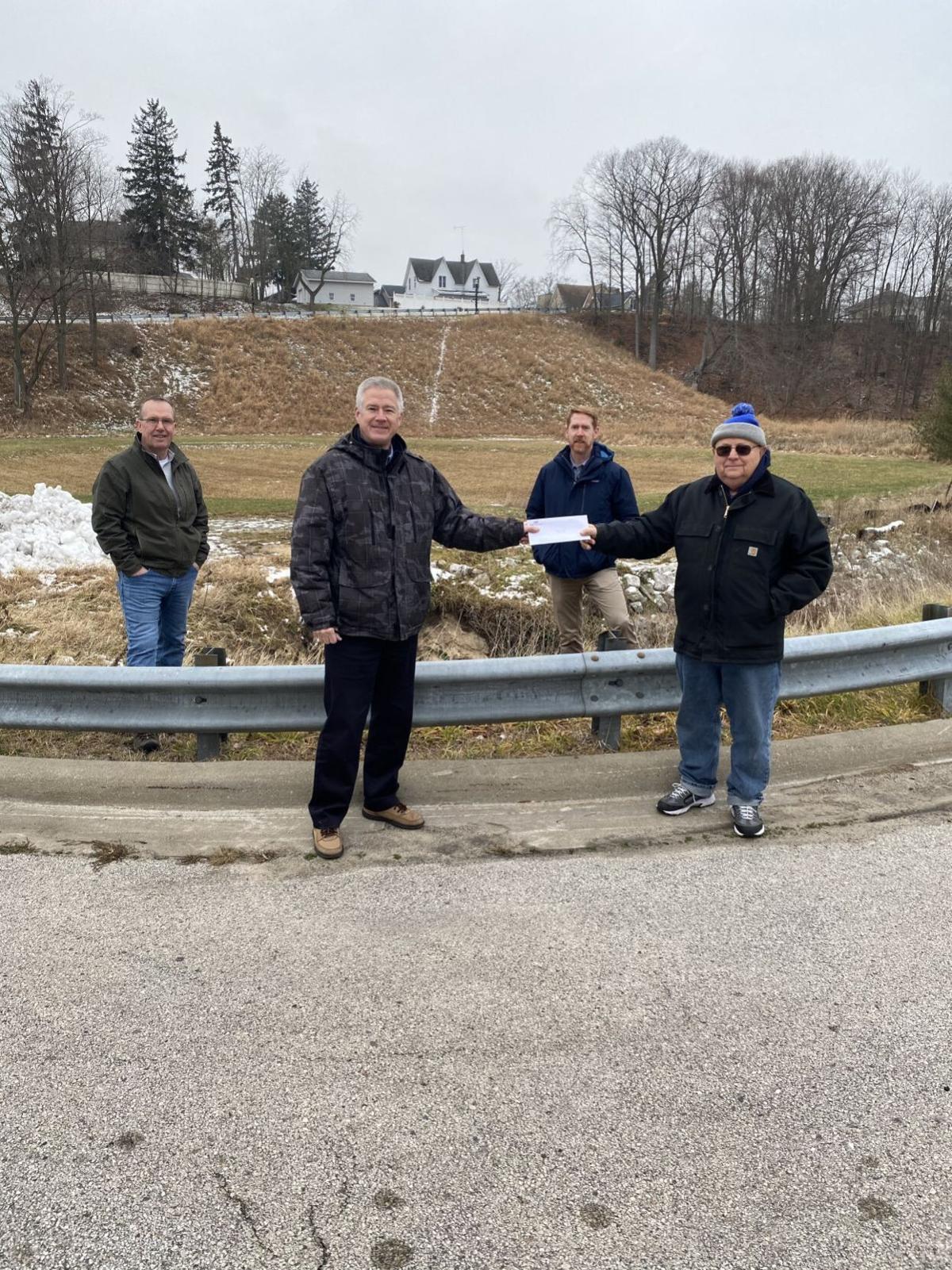 In front, Montague-Whitehall Rotary President Ryan Briegel (left) presents a $10,000 check from the club to Montague Mayor Tom Lohman. The funds will help pay for a concession/warming/maintenance building at Buttermilk Creek Park shown in the background. Behind them are Rotary Club Director Dale McKenzie and Montague City Manager Jeff Auch.

This conceptual design of Buttermilk Creek Park shows the location of the current skating rink and sledding hill, and the future locations of a concession/warming/maintenance building, walking trails, playground and gazebo.

In front, Montague-Whitehall Rotary President Ryan Briegel (left) presents a $10,000 check from the club to Montague Mayor Tom Lohman. The funds will help pay for a concession/warming/maintenance building at Buttermilk Creek Park shown in the background. Behind them are Rotary Club Director Dale McKenzie and Montague City Manager Jeff Auch.

That service is continuing through the challenges of the worldwide COVID-19 pandemic this past year.

The pandemic has severely limited the activity of the local club which has about 50 members, but has not stopped it.

Montague-Whitehall Rotary is demonstrating its perseverance to better the community during the pandemic by announcing a partnership with the City of Montague to help fund a concession/warming/maintenance building for the downtown Buttermilk Creek Park which the city is currently developing.

This summer Montague is planning to install the 12-by-16-foot building and start developing walking trails on the vacant city-owned property on Spring Street behind the Montague Post Office and the White Lake Senior Center.

In November, the Montague-Whitehall Rotary board of directors with support from the club members, voted to donate $10,000 toward the pre-made structure which the city estimates will cost upwards of $15,000.

“For the last few months Rotary has had some funds it wanted to give away,” Ryan Briegel, club president for 2020-2021, says. Briegel and Rotary Club Director Dale McKenzie presented the check to Montague Mayor Tom Lohman and City Manager Jeff Auch Dec. 21, an early Christmas gift to the city.

“We got both city managers together (Auch and Whitehall City Manager Scott Huebler) and explored what they had in mind and this was the top of the line for Montague. This development will be good to have the Rotary name on it as well as the City of Montague. We’re glad to participate, and I think it will be a great focal point for the City of Montague. A great project.”

Lohman shares that the Buttermilk Creek Park project meets a goal of the city to develop more gathering places for local residents.

“At a lot of the meetings we’ve been to with the Michigan Municipal League one of the things they concentrated on is to have central gathering places. Places where people can gather together and have have the community come together. This will be another one of those places, from the park and the walkways, to the bike trail and to the bridge. Walks around the schools are also a part of future plans.”

According to Auch, the history of the Buttermilk Creek Park property goes back to a location for Chimont, an industrial facility in the 1950s and 1960s. The facility experienced flooding a couple of times, then moved.

Auch adds that the last flood in the 1980s, spurned the city to do something. During that time the city started talking to the state and FEMA, and never realized at that time that the property was located in a designated flood plain. So, the city manager says, Montague received FEMA funds to purchase the property. Put in the public hands, the building was removed.

As part of the FEMA funding there is restrictive covenants that no permanent structure can be located on the property. It sat undeveloped for several years.

“It has to be more outdoor recreation, was an open space for a long time and because we couldn’t use it for anything, we said okay what’s the best way to use it,” Auch explains.

That’s when the thoughts started coming for hiking trails, a skating rink, playground structures. “Things that if the area does get flooded — which it won’t — won’t get damaged or washed downstream,” he says. The property is a part of a Montague drain project administered by the Muskegon County Water Resources Commission (formerly the Drain Commission).

Auch says Buttermilk Creek Park will be a five to 10-year project. “We will start putting components together.”

The park development began when the city repaved Dowling Street. A slope was created along Dowling for a sledding hill. A skating rink was built with lighting.

“Last winter we flooded the rink,” Auch says. “Because of stretches of warm weather, the rink was only open for a dozen days. Those days included the Winter Wanderland festival. Last year three dozen skates were donated to the city — also nets and hockey sticks.”

The future development of the park includes plans for a small outdoor event center with a stage and sound system.

“We will keep picking away at it,” Auch says, adding, “The Rotary donation definitely helps out. It expedites the project.”

The club is donating funds even through its ability to raise funds for projects in the community has been severely limited by orders to limit gatherings to battle the spread of COVID-19.

Since last March the local Rotary Club, which normally meets weekly at the White Lake Eagles in Whitehall for a luncheon and program, has been meeting virtually. In recent months those virtual meetings have been limited to two a month.

The pandemic has resulted in the club canceling its largest fundraiser, the dinner-auction which was scheduled to be held last November and also calling off its popular Rotary Pancake Day in March.

The club continued its education programs by giving $1,000 college scholarships to six local graduating high school students in June, and providing leadership opportunities to two high school juniors who attended the virtual World Affairs Seminar which normally is held annually on the campus of Carroll University in Wisconsin.

In the past the local Rotary club has invested in the community, including the Rotary band shell on the Montague waterfront, a gazebo in downtown Whitehall and at the bike path trailhead in Montague and development of the White River trail in Whitehall. It has also supported the arts, food bank and education efforts in the community.