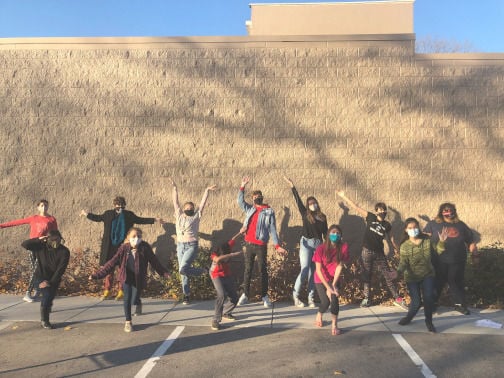 The cast and crew of “It’s a Wonderful Life” pose for an outdoor photo at one of their only two outdoor rehearsals. The group has since moved their play practice to online using video conferencing service Zoom. 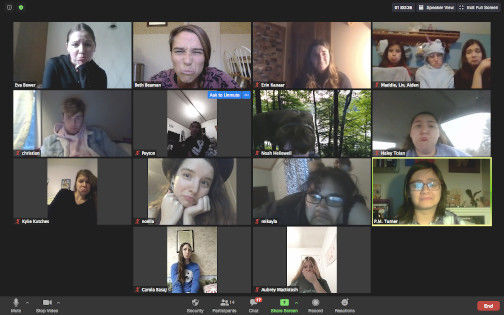 Some of the cast members of “It’s a Wonderful Life” rehearse over Zoom.

The cast and crew of “It’s a Wonderful Life” pose for an outdoor photo at one of their only two outdoor rehearsals. The group has since moved their play practice to online using video conferencing service Zoom.

Some of the cast members of “It’s a Wonderful Life” rehearse over Zoom.

WHITEHALL – In show business there is a motto: ‘The show must go on.’ That is precisely what a group of young actors are doing despite these trying times.

With rising rates of COVID-19 cases in Muskegon County, a group of young actors have had to change how to do their play rehearsals. The cast of this year’s radio drama “It’s a Wonderful Life” first began meeting in-person to rehearse the play, but have now begun meeting digitally using the video conferencing service Zoom.

“So, we had been rehearsing once a week in-person, and our goal was to do once a week virtual as well. But what ended up happening is that we had one full week where we were able to get together in-person,” Director Cindy-Beth Davis Dykema said. “And then – of course – this new executive order came through, or rather the new mandate from DHHS (Department of Health and Human Services).”

This year’s performance of “It’s a Wonderful Life” is being done in the style of radio theater, which harks back to a time before television, when families would huddle around a radio, and listen as actors performed acoustically instead of visually.

Davis Dykema said the choice to do radio theater allows the members of The White Lake Youth Theatre to work solely on their characterization, and to avoid acting close to one another for a scene.

“We (The Playhouse at White Lake) started planning this season [sic], for the year we just looked at the fact that we had no idea what the winter was going to bring, so we chose a radio play,” said Davis Dykema.

“So, we were fortunate, and that we wanted to maintain social distancing. We also wanted to make sure we didn’t end up a creek if we were down a student, because they were quarantined or something.”

During the first week of rehearsal cast members would come to The Playhouse at White Lake and receive temperature checks, fill out a questionnaire, be asked to use hand sanitizer, and then they would sit down in a chair that was spaced six feet away from the next person. The plan was to do a few days each week like that, and then another few days virtually, until it was time to record the play.

Davis Dykema said the vision for the play prior to the newest mandate was to have people log in and have a fireplace background going on the computer, tablet or cell phone screen.

“[…] Then basically we would just do kind of like a fireplace background when we produced the show. So, if you think about, you know [sic], [a] cozy Netflix fireplace. That was what we were envisioning – for the background anyway – and it would literally be radio theatre,” said Davis Dykema.

But now, since people can’t currently meet in person, the challenge is to figure out how best to capture audio over Zoom. However, should restrictions ease up, Davis Dykema said she’d like to split the cast up, and have two groups meet to record their parts of the play, allowing them to avoid violating the 10-person gathering rule that’s in place.

In addition to meeting over Zoom for rehearsals, The White Lake Youth Theatre have taken advantage of other digital forms of communications. They use both email and a private Facebook group to communicate and strategize with one another.

But not everyone has the luxury of high-speed internet, and rehearsing a play digitally comes with some unique challenges in the more rural parts of the White Lake Area.

“We have some students in such rural areas, some them are old enough where they drive to a local McDonald’s and sit and get the WIFI there. Some of them go the local library, some of them are […] stepping outside into their car so they can have quiet from the rest of the house in order to do the calls.”

But not all of the challenges are totally unique, as is common with video conferencing, Davis Dykema said sometimes people forget to mute and un-mute their mics. However, what might be sort of unusual is that for this group there are 17 people, so things can get hectic.

In addition to play rehearsal being a creative outlet for cast members, it might also be an emotional one as well. Davis Dykema said each rehearsal begins with an hour or catch up with all the people involved, and gives people the opportunity to share how the current situation with COVID-19 is affecting them.

For some she said people have expressed sadness, and others it might be a lack of motivation.

“We really make it a safe space where it’s like you don’t just have 15 seconds to speak, and then moving on because we have a show to do. It’s like a community, in a sense a support network, said Davis Dykema.

“[…] It’s nice because it feels a little bit like group therapy.”

Even with all the challenges of rehearsing over the internet, Davis Dykema said she has been surprised at how well “It’s a Wonderful Life” has been translating to their current situation. But she said The White Lake Youth Theatre were preparing for what could be their worst-case scenario.

“It’s a Wonderful Life” will be available on-demand from The Playhouse at White Lake from Dec. 11-13 and Dec. 18-20. For more information visit: http://theplayhouseatwhitelake.org/.