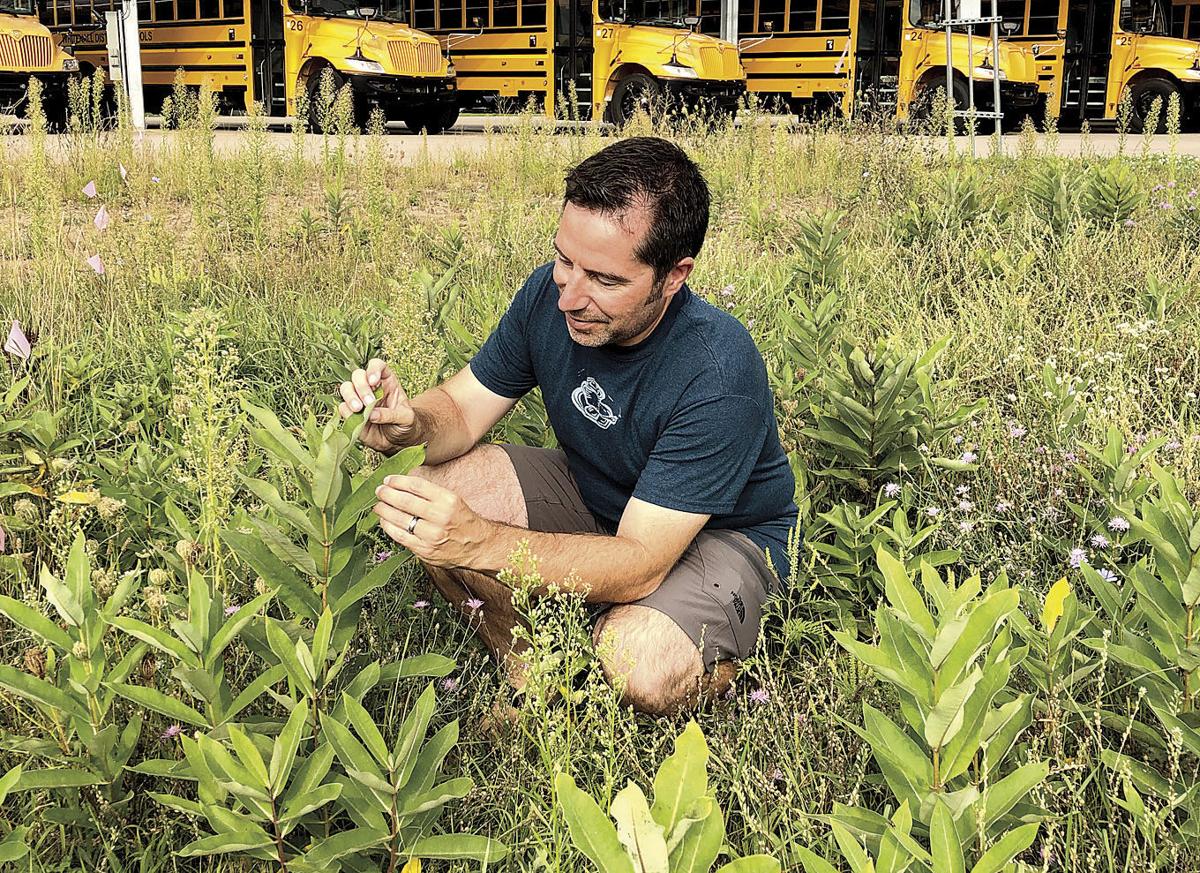 Ealy Elementary School teacher Gabriel Knowles examines a plant. Knowles, who recently was named the state’s Elementary Science Teacher of the Year, is working on a study with Michigan State University scientists regarding the effect of milkweed plants on the local butterfly habitat. 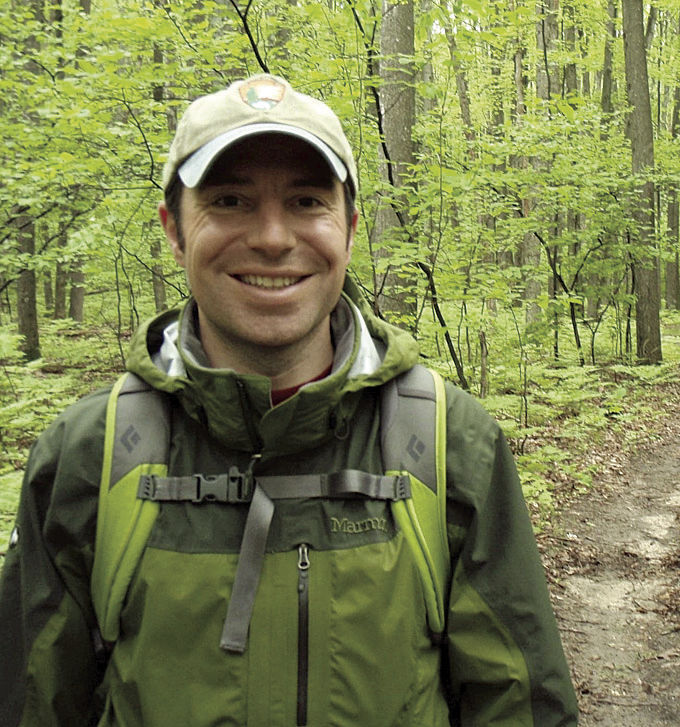 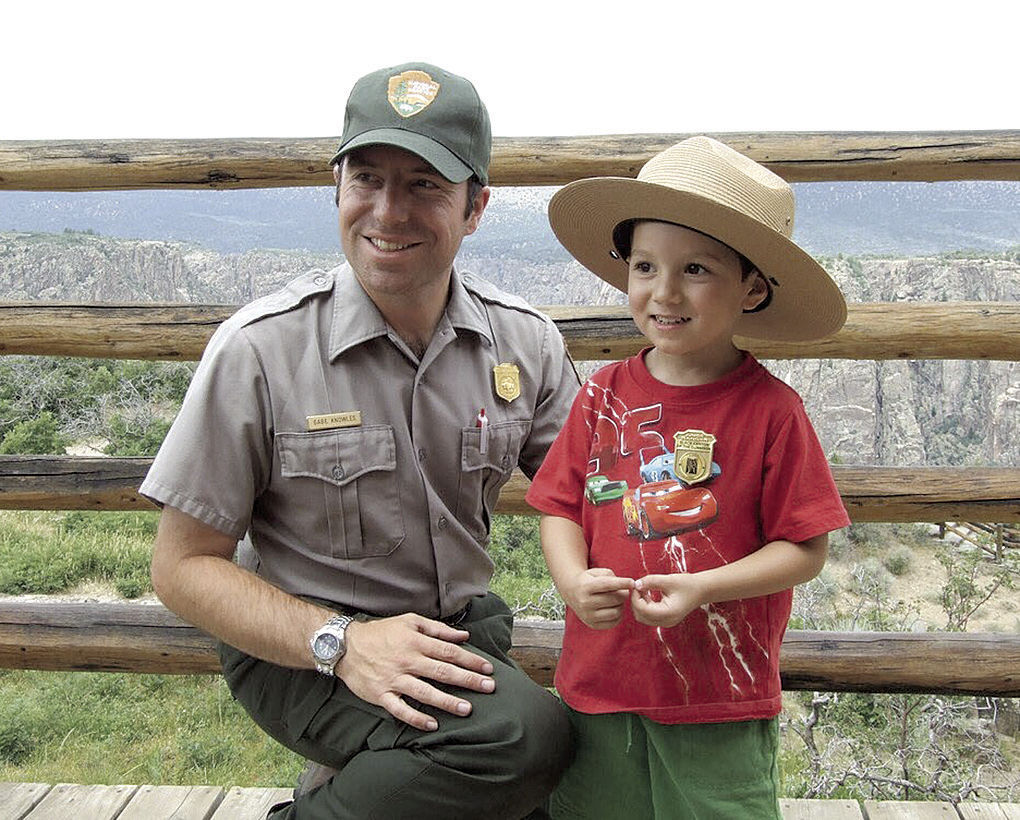 Whitehall teacher Gabriel Knowles (left) poses for a photo with a young boy during his time volunteering in the National Park Service. Knowles, who worked in wildlife biology after college and before becoming a teacher, incorporates his experience into his teaching.

Ealy Elementary School teacher Gabriel Knowles examines a plant. Knowles, who recently was named the state’s Elementary Science Teacher of the Year, is working on a study with Michigan State University scientists regarding the effect of milkweed plants on the local butterfly habitat.

Whitehall teacher Gabriel Knowles (left) poses for a photo with a young boy during his time volunteering in the National Park Service. Knowles, who worked in wildlife biology after college and before becoming a teacher, incorporates his experience into his teaching.

Knowles, who teaches fourth-grade science, said that in his teaching career, he’s noticed that the early ages are the time to get young students interested in science. He noted that with so much focus on reading and math at those ages, it can be hard to get students to also invest their emotional capital in science, but when they do, Knowles thinks they benefit.

“Hopefully that gets them interested in learning in general,” Knowles said. “Hopefully as they become more interested in learning in general, they might gravitate to STEM fields, which is something we could use in our country. I have a science degree, and I started out actually doing science, then I switched and became a teacher. I always gravitated to elementary school teaching. That’s where I thought I could have the biggest impact.”

Susan Tate, a Whitehall Middle School teacher who was one of the people that nominated Knowles for the award, said Knowles excels at connecting his science lessons to other subjects, an important skill for an elementary school teacher. Tate’s daughter Allison was one of Knowles’ students when she was in fourth grade.

“What I love about Gabe is that, before he was teaching he had experience in the field,” Tate said. “He comes from a science background, an understanding of research, environmental type stuff. To kind of leverage his connections and his varied interests in the environment is what, in a way, sets him apart.

“Elementary teachers are often asked to teach all the subjects, and science can take a bit of a backseat. But because Gabe comes from this background of science, he finds ways to connect science to English, or science to math, fields that take precedence for a lot of teachers. He’s a real explorer at heart.”

Knowles graduated from Grand Valley State University in 1997, and before becoming a teacher, worked for four years in wildlife biology in the Western United States. After that period, he had the opportunity to either move forward with that and pursue a Ph.D or to teach, and he chose the latter — in part because of the experiences he had working with young people in his four years of biology work. (He also spent eight summers volunteering for the National Park Service.)

That doesn’t keep Knowles from pursuing science at the university level, though. Knowles and fellow Whitehall teacher Brittany Christensen received a grant during the 2019-20 school year from the National Science Foundation and are working as part of a Michigan State University study. The study, which is being done primarily alongside Drs. Doug Landis and Nate Haan from MSU, aims to improve the habitat for monarch butterflies in the state by cutting back milkweed plants early in the spring and summer so that the stems regrow. Preliminary results have shown that butterflies lay more eggs on the regrown stems than on milkweed plants that are not cut, and have also shown that fewer predators pursue the butterflies and their eggs around the regrown milkweed stems.

Knowles added that these findings could even be used to increase farm output. The milkweed plants could attract other animals that would then eliminate some of the pests that attack crops and give farmers nightmares.

Knowles and Christensen’s challenge has been to apply these findings to an elementary-school audience, and Knowles said that they were doing so via virtual conferencing with MSU scientists when the COVID-19 pandemic forced schools to close in March. In an odd way, his students were prepared for virtual learning as a result of already being exposed to it in his science class.

“We had to think about, how do we have students do these lessons we’re trying to create?” Knowles said. “We’re hoping to launch something where students can do some of this butterfly conservation work from home in the spring. The logistics of it are challenging. We have a kids’ setup we’re trying to put together. We have to meet up on Zoom or Google Meet.

“This is what scientists do. They talk around the world and collaborate. This isn’t new; COVID just put this spin on it. It does push us to think differently and work differently.”

This work earned Knowles nominations for the teacher’s award. He said that for the award, two people must nominate someone so they can receive consideration — his nominations came from Tate as well as Sarah Coleman, who is a science consultant for the intermediate school district. From there, nominees must provide references from three different people — Knowles had Coleman, Christenson and Kara Haas, a science education and outreach coordinator at MSU, provide the references.

Knowles said that it’s likely the work he’s done with Christenson and MSU was a factor in his receiving the award, because it’s not something that many teachers at the elementary level are fortunate enough to do.

Tate said Knowles’ work at Whitehall is very deserving of his award, and it underscores how important learning about science is in the elementary school years.

“An award like this shows how important it is to teach quality science, and how this administration is supporting its teachers,” Tate said. “Gabe and I both think the administration supports taking kids outside in the field and doing these projects. Compared to other districts, I think we get a lot of freedom and flexibility, and what Gabe is doing really shows what happens when a teacher gets the opportunity to plan some cool things.

“He’s an outstanding teacher and a great guy and it’s cool to see him recognized.”