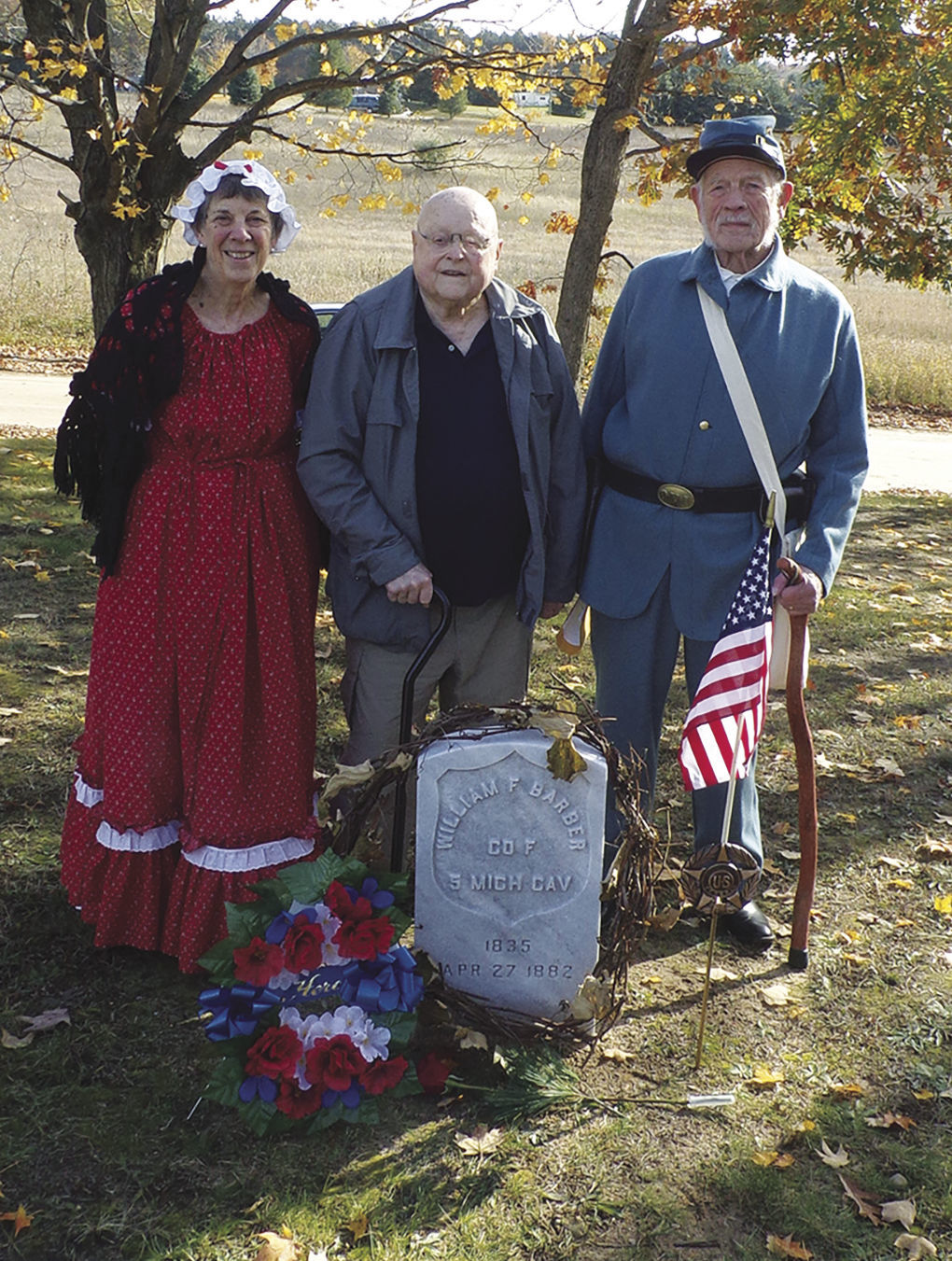 Richard Crick, above center, stands behind the new headstone for his great-great-grandfather, Civil War veteran William F. Barber. For almost 14 decades Barber’s grave has been unmarked in the Ferry Township Cemetery, but all of that changed Oct. 26 when over 50 veterans turned out to give Barber full military honors. White Lake area historian, Irv Holdgreve, right, was instrumental in filing the paperwork needed to get the headstone. He and his wife, Jan, left, wore Civil War period dress to Barber’s ceremony. 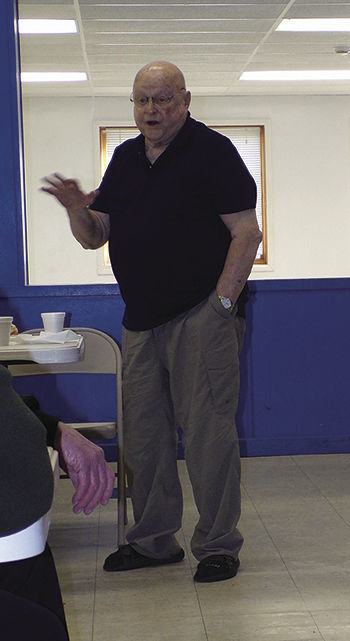 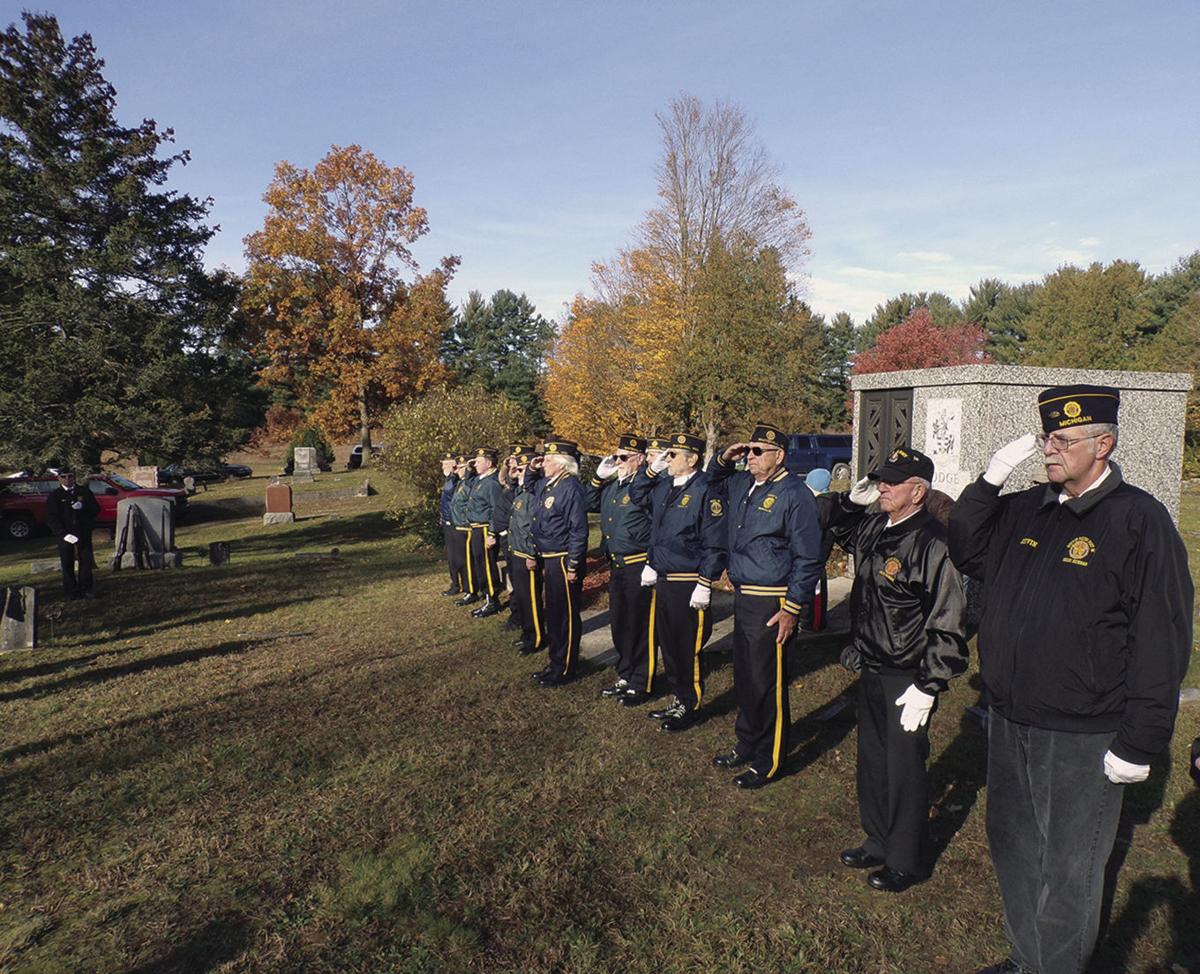 Veterans from Oceana County and the White Lake area turned out to pay their respects and provide a full 21-gun salute to Civil War veteran William Barber of Ferry.

Richard Crick, above center, stands behind the new headstone for his great-great-grandfather, Civil War veteran William F. Barber. For almost 14 decades Barber’s grave has been unmarked in the Ferry Township Cemetery, but all of that changed Oct. 26 when over 50 veterans turned out to give Barber full military honors. White Lake area historian, Irv Holdgreve, right, was instrumental in filing the paperwork needed to get the headstone. He and his wife, Jan, left, wore Civil War period dress to Barber’s ceremony.

Veterans from Oceana County and the White Lake area turned out to pay their respects and provide a full 21-gun salute to Civil War veteran William Barber of Ferry.

It couldn’t have been a more beautiful day for a military ceremony at Ferry Township Cemetery. Oct. 26 dawned sunny, albeit chilly, but by 10 a.m. the air had softened and the wind was gently rustling through the tall trees. A gathering of veterans and other participants had assembled for a most unusual event—the dedication of a headstone honoring the service of Ferry Civil War veteran William Frederick Barber.

It was almost hauntingly peaceful, the wind shaking loose a cascade of bright yellow leaves that glittered in the sunlight and fell to earth in a shower of gold, as if blown down by the breath of a presiding angel. And it could have been—after all, if a man’s long and daunting quest to find and commemorate the unknown grave of his Civil War ancestor can come true, anything is possible.

That morning, William Barber was remembered in a solemn ceremony that featured the unveiling of a new headstone and a tribute to his military service. As members of a number of area VFW and American Legion posts stood at attention, the service, adapted from the 1917 GAR Service of Dedication, was performed by Marine Gunnery Sergeant Jim Carlson, who reminded the gathering of how and why we, as a society, make the effort to honor our military dead, especially those who were long forgotten.

“This Memorial assures us that our dead are held in remembrance. Those dead who gave their lives for the security of the citizens and the union of the states. It is significant of brave and loyal obedience to the command of the nation always and everywhere since the obligations of citizenship are not restricted to time or place, or to the conflict of arms…The honor you pay to the patriotic dead…will serve not only to make American citizenship in these days more reputable, but also to maintain and perpetuate, through all future generations, the union and authority of the United States of America…”

There were the standard rituals. The Honor Guard presenting the Symbols of the Soldier. The Rifle Guard taking their positions. The posting of the colors. The 21-gun salute, performed in three separate volleys. The playing of taps. The rousing patriotic music performed by the Shelby High School Band. The benediction from Air Force Chief Master Sergeant Walter Carrier. And finally, “Parade dismissed.” It was a moving ceremony, made all the more touching by the fact that it was the culmination of the dream of 94-year-old Richard Crick, the great-great-grandson of William Barber, to finally and properly honor an ancestor he never knew, but whose life he had pieced together with unflagging dedication.

In an unfortunate bit of irony, however, Crick wasn’t there. He was driving down from Petoskey, but due to a mix up over the time, arrived just as the service ended. Fortunately several of the onlookers had videotaped it, and he was able to enjoy an instant replay. And at the reception at the Ferry Community Center, he was able to thank everyone who made it possible.

“I appreciate everyone who came here to honor William Frederick Barber—and you didn’t even know who he was!” Crick beamed at the crowd. Leaning on his cane, he was bent over with age, but seemed, at the same time, ageless, his voice strong, his delivery sharp.

Later, sitting at a table with some of the men who had arranged the event, Crick told his story, and that of his illustrious—and mysterious—relative.

It all came about due to his passion for genealogy. “I started researching my family tree 50 years ago,” he noted. “I was interested in the history of my name, Crick. It was originally ‘Kruck,’ and I discovered that my ancestor came to America in 1731 and settled in Sinking Springs, Pa. A very descriptive name!”

Over the years, Crick, who was born in Alpena, Mich. and raised in Petoskey, but has lived in Anchorage, Alaska since 1960, accumulated a database of some 11,000 names—a remarkable accomplishment considering that when he began what turned into a lifelong project, there was no such thing as Ancestry.com or 23andMe, or all those online resources that do it all for you. There weren’t even computers—at least not the kind that were smaller than a football field. The PC didn’t become available until the 1980s, which means that Crick did his research the old-fashioned way.

“I went to the National Archives and looked up everything I could,” he explained.

In the process, Crick became intrigued by a certain individual. His name was William Frederick Barber and back some 150 years ago, he was a resident of the Village of Ferry.

“My grandmother’s mother was a Barber. She told me who her father was, and that he lived in Ferry. Twenty years ago I came here and found John Barber’s grave. He was William Frederick’s father.”

Crick discovered that William Barber was born in England in 1835. He married in 1857 and emigrated to the United States with his father and family around 1860. Of particular note was his military service; William was a Civil War veteran who had served with General George Armstrong Custer’s regiment. He enlisted in the Fifth Michigan Cavalry Brigade in 1862 and fought his first battle—talk about a baptism by fire—at Gettysburg. Barber went on to fight no less than 57 major engagements, the most momentous being the battle of Appomattox Courthouse April 9, 1865—the day that Robert E. Lee surrendered to Ulysses S. Grant and the Civil War officially ended. William Barber was with the brigade when they marched in the victory parade down Pennsylvania Avenue the following month.

What happened to Barber after that? Well, while researching land records in Hart, Crick found that his great-great-grandfather owned a number of land parcels in Otto Township, just south of Ferry. But when his wife died in 1873, he sold off his acreage and, in 1875, disappeared from the records, along with his two sons.

Determined to solve the mystery of Barber’s disappearance, Crick went digging. With the help of the Oceana County Genealogical and Historical Society, he got William Barber’s war records and learned that he was buried in Ferry Township Cemetery. But while William’s wife, Harriet, is also buried there with her headstone intact, the grave next to her was empty. So began Crick’s quest to find William Barber’s grave and properly memorialize it.

“I was at our cemetery in Petoskey and asked the sexton, how can I get a headstone from the federal government honoring a Civil War veteran? He gave me the name of a man in Whitehall and I contacted him.”

That man was Civil War historian Irvin Holdgreve. Sitting next to Crick, Holdgreve, 82, a military historian and a member of the Sons of the Union Veterans, is dressed in a Union veteran’s uniform made especially for him—an impeccable replica fashioned of finest wool, the brass buttons gleaming with well-polished pride.

“I was in Grand Haven at a meeting of the Sons of the Union Veterans when someone gave me a piece of paper about this guy, Richard Crick, and his ancestor who needed a military headstone, and I said, ‘I’ll get on it,’” Holdgreve recalled.

It didn’t happen in a day, though. Or even a year. Holdgreve had to jump through numerous hoops, courtesy of government red tape.

“The Sons of the Union Veterans gave me the paperwork to fill out for an unmarked grave. I sent it to the government, and they said, ‘We don’t recognize that form.’ So I had to fill out the correct form. I sent that in and then there were all sorts of departments and forms…The whole thing took two years!”

To Holdgreve, however, it was worth it. “My ancestor was a Civil War Veteran,” he explained. “That’s one of the reasons I wear this uniform.”

And finally the headstone was delivered, in July 2019. Kevin VanDyke, staff sergeant retired from the United States Air Force and a member of the Gordon Bates American Legion Post 30 in Shelby, took over from there.

“Irv got ahold of Jim Carlson, of the Pentwater VFW, and he contacted Larry Fessenden, and Larry handed it over to me,” VanDyke, a tall, affable man whom many of you Shelbyites undoubtedly remember as your former mailman, recounted.

VanDyke then proceeded to organize the dedication ceremony.

“I went online and got the Service of Rededication from the Sons of the Civil War. I figured, if we’re gonna do it, we’re gonna do it right. I got the Shelby Band, and had Larry reserve the Ferry Community Center. I contacted John Bumstead, who was happy to be there today. I got eight different posts from the different areas of the county. There were somewhere around 57 veterans there today—the most I’ve ever seen.

“Many people don’t know this, but when we do these ceremonies, it’s free for any member of the military. We have a deal set up with the other posts, and it’s covered by donations.”

Why, to VanDyke, is it important to go through the time and trouble of dedicating a grave to a veteran of 150 years ago, of whom no one in the area was even aware—literally the unknown soldier?

“It’s important because of the history,” VanDyke emphasized. “This man spent his whole military career with General Custer. He fought at Gettysburg. He witnessed Lee’s surrender to Grant. He marched in the victory parade in Washington. So when we do these ceremonies, we’re showing the respect to the veteran that he deserves, no matter where or when he served. It’s a small payback from us to the family.”

Richard Crick summed it all up with a rather profound observation. To him, today’s ceremony wasn’t only for William Barber’s immediate family—it was for the family of the nation.

“In a way,” he reflected “we’re all great-great-grandchildren of William Barber.”