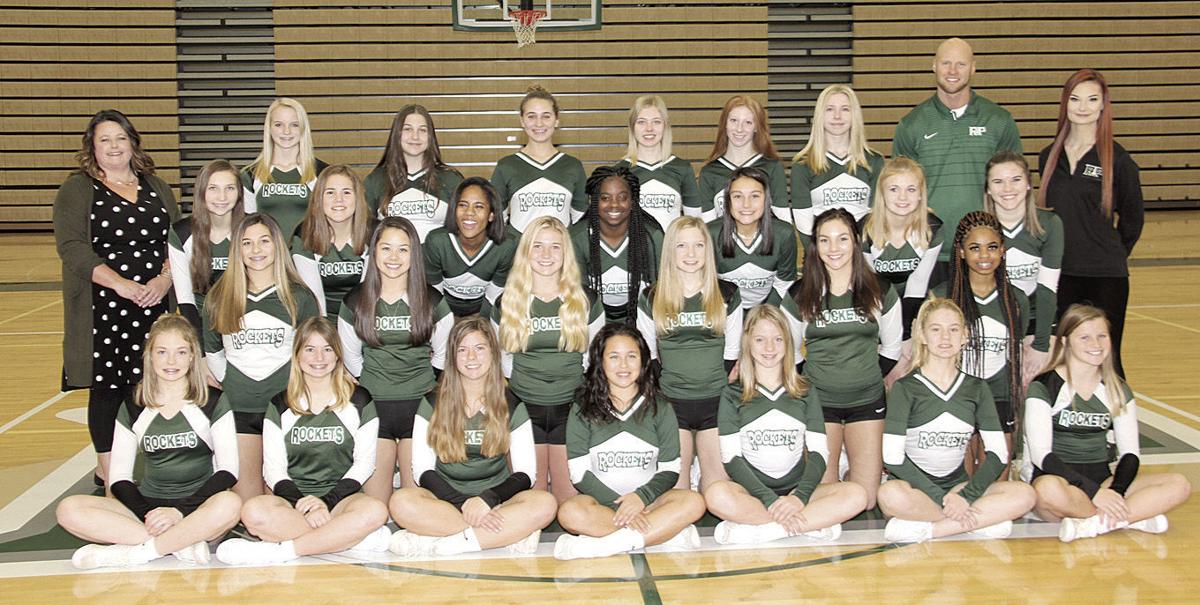 Reeths-Puffer’s cheer team poses for its team photo late last year. The Rockets, returning from a one-season hiatus, were a very young team, but under the tutelage of head coach Andy Brown (back row, second from right), they had a successful season. 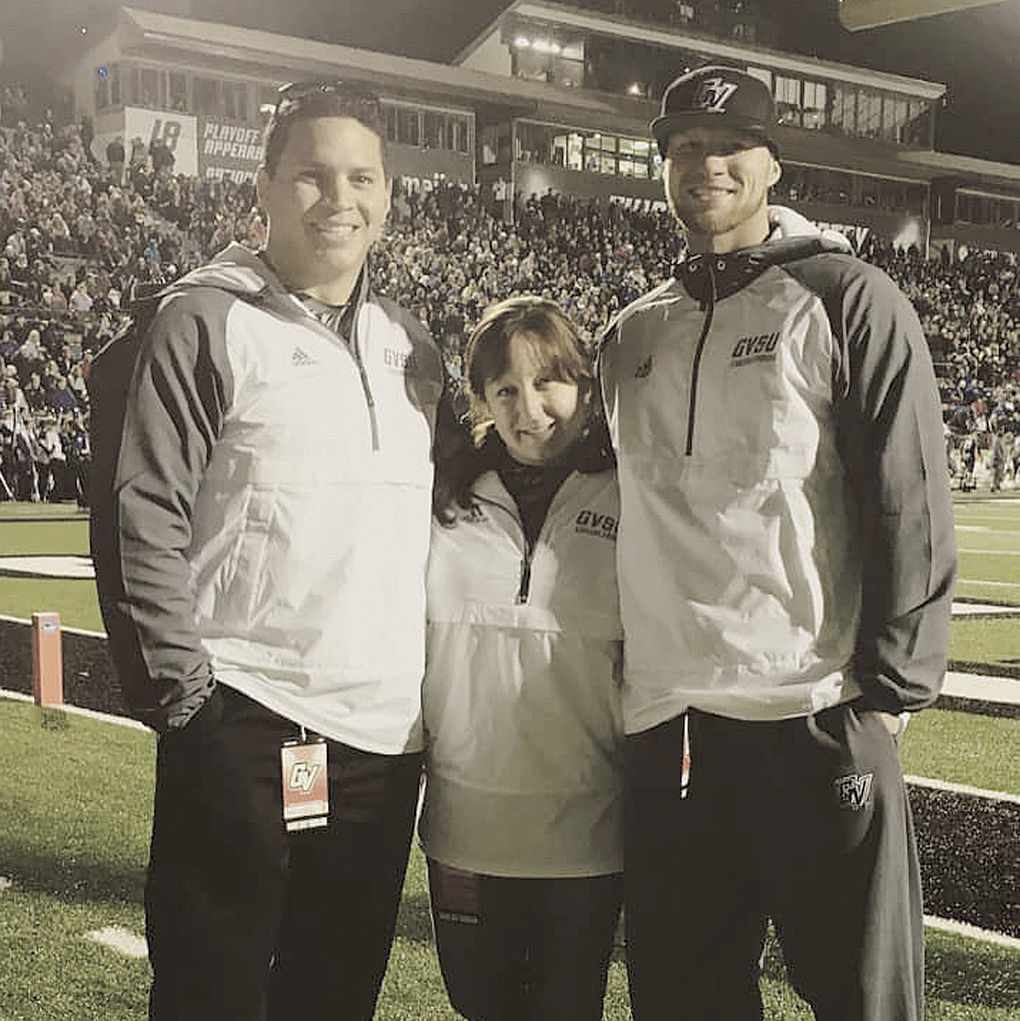 Reeths-Puffer coach Andy Brown (right) was a successful cheerleader and coach at Grand Valley State prior to his time at R-P.

Reeths-Puffer’s cheer team poses for its team photo late last year. The Rockets, returning from a one-season hiatus, were a very young team, but under the tutelage of head coach Andy Brown (back row, second from right), they had a successful season.

Reeths-Puffer coach Andy Brown (right) was a successful cheerleader and coach at Grand Valley State prior to his time at R-P.

Andy Brown didn’t think he’d ever coach cheer again, but when an unexpected opening came up at Reeths-Puffer, he found himself back on the mat.

Brown took over the R-P head coaching job this past season, and in doing so became one of just two current varsity cheer head coaches in Michigan who are men. The other, Chris Hudson, now coaches East Kentwood after previously having a long and successful run at Kenowa Hills.

Brown, a physical education teacher at R-P, found himself sucked back into the cheer world when he found out from a group of his students during a football game (Brown was an assistant coach this past season) that the Rockets’ planned varsity coach had resigned.

The program was already in a state of flux; after making appearances at the previous two state finals meets, R-P had been forced to cancel the 2018-19 season due to lack of student interest. The unexpected departure of the coach just weeks before the season was set to begin could’ve been a massive setback. Members of the Rocket team, though, determined Brown was the person to turn to.

“I had him as a teacher before and I knew he was a good coach and that he cheered before and had a background in cheering,” Rocket freshman Destinee Amos said. “I thought if we asked him, he’d think about it and help us make our program better again. We told him that if he was our coach then we’d be able to actually get somewhere. He’d be able to help us.”

Brown’s cheer bona fides are unassailable. He went to college later than most, enrolling at Grand Valley State in his mid-20s. Needing an activity to meet people and keep himself engaged, he ended up on the coed cheer team at GVSU, and he helped the Lakers to a great deal of success, cheering at a national meet in Daytona Beach, Fla. After leaving competition after the 2014-15 academic year, Brown coached in the program for an additional three years; in his three years coaching at two different levels, he said, his teams finished second in their respective national meets each year, by a combined 0.36 points. Brown also was an assistant coach at Forest Hills Central for one of his former GVSU teammates, Olivia Obetts, during the 2018-19 campaign.

After that, though, Brown was ready to move on and focus on his teaching and assistant coaching for the baseball and football teams. He had to be talked into taking the job, both by his students and by athletic director Tony Schmitt. Eventually, he consented to lead the Rockets.

“When the girls approached me, my first response was, I didn’t want to do it,” Brown said. “Bless their souls, they kept approaching me, telling me how much they needed and appreciated me.”

For the Rockets who pushed so hard for Brown, it was effort that paid off; despite a roster composed largely of freshmen and devoid of seniors, the Rockets had a solid year, finishing fourth in the seven-team O-K Black Conference, seventh in districts, and capping the season off with a season-best 703.48 points to take second in the GMAA meet.

At the districts, R-P sat in third place after the second round, in position to reach regionals. It would’ve been a spectacular accomplishment for the program, given where it had been just a couple of months prior, to advance out of the district, and it was a showing that drew attention — interestingly, from Kenowa Hills, where Hudson had previously coached. The Knights’ athletic director, Charlie O’Dell, complimented Brown on the team’s improvement through the season.

“I thought it was amazing that he stepped forward to tell us how good we looked,” Brown said. “At the city meet, we took second behind Shores, so to do that means something special to me.”

Anyone that’s been to a competitive cheer meet would quickly be disabused of the notion that cheerleaders merely stand and wave their pom-poms around. Cheer meets often consist of acrobatic moves most athletes wouldn’t dare attempt. What’s more, while in collegiate sideline cheer it’s common to see one man serving as a base for a female counterpart, high school cheer meets see several athletes combine as a base for a teammate. The team-oriented skills are the ones that draw Brown into the sport.

“(People) think of cheerleaders as rah-rah, but cheerleading is such a difficult sport,” Brown said. “All four people have to be in sync for a skill to hit. As a male, I’ve based, but only by myself...It’s easy to dissect what’s going wrong. When you throw four people in the mix, it’s tough to check hand placement, body position, and make sure the girls aren’t doing too much, too little, or trying to overcompensate for each other. It’s a reason I enjoy coaching cheerleading. It can be the slightest moving of a knee, or a hand placement, and the stunt won’t hit.”

The familiarity Brown and the girls already had from time in PE and early practices pretty much eliminated any awkwardness in having a man coaching the cheer team. In fact, Amos said Brown was easier to interact with than most coaches she’d previously had.

“He was a lot more supportive and understanding than a girl coach,” Amos said. “He helped a lot...During sideline (season), we couldn’t do anything. We struggled a lot. Once he came in, he helped a lot and made us a lot better than what we were.”

“The big difference, I think, was the opportunities we have at practices,” Lily Schoonbeck, who like Amos was first team all-conference, said. “Having a guy there, and considering he had a lot of experience in cheerleading...he brought the college perspective into it. Our work strategy at practices was a lot different.”

In the practice room, Brown said, he was as tough on his athletes as he would’ve been on any Rocket boys.

“The girls know I’m not one to accept the easy way out,” Brown said. “I’d push them every day in practice. I’d have them do skills that they weren’t sure they could do. I had a high (standard), to where if we didn’t do it at practice we weren’t going to do it in a routine. The girls knew I wanted the best for them not only in the sport but in life.”

Even though Brown was a hardworking coach, Schoonbeck said, he also knew how to keep the girls going if doubt started to creep in, which it occasionally did with the very young team as the athletes realized the enormity of their competition during the season.

“We were all doubtful at certain times, and we didn’t know how to handle it,” Schoonbeck said. “We were all stressed about being in first place and being the best we could at competitions. Coach Brown would always say, it didn’t matter if we were the best. We needed to break our own personal records and have fun. It brought a lot of worry out of the team.”

Brown not only dove into the team with tough practices, but he also asked around for advice from other coaches on starting a program and various other head coaching tips, since the Rockets were essentially rebooting. Two of the coaches Brown consulted were the varsity head coaches under which he worked last year, Matt Bird (football) and Butch Attig (baseball), and he liberally borrowed from their philosophies.

“Even though I was starting a program this last year, I had other great coaches that helped me mold the style I wanted to do,” Brown said.

It’s a style that Brown will continue to employ; the Rocket cheerleaders pushed for Brown to return next season, and he said he will do just that. With the entire roster set to return, plus some talented athletes coming up from the middle school ranks, R-P should be among the league favorites next winter.

Schoonbeck and Amos are certainly looking forward to what the team can accomplish now that they don’t have to worry about who will be coaching.

“I can’t speak for the whole team, but I know I’m very excited to have him again as a coach,” Schoonbeck said. “He just brought a lot of positivity to the team and made sure we all knew how good we were for how young we are...We’ll be determined to work harder as a team.”