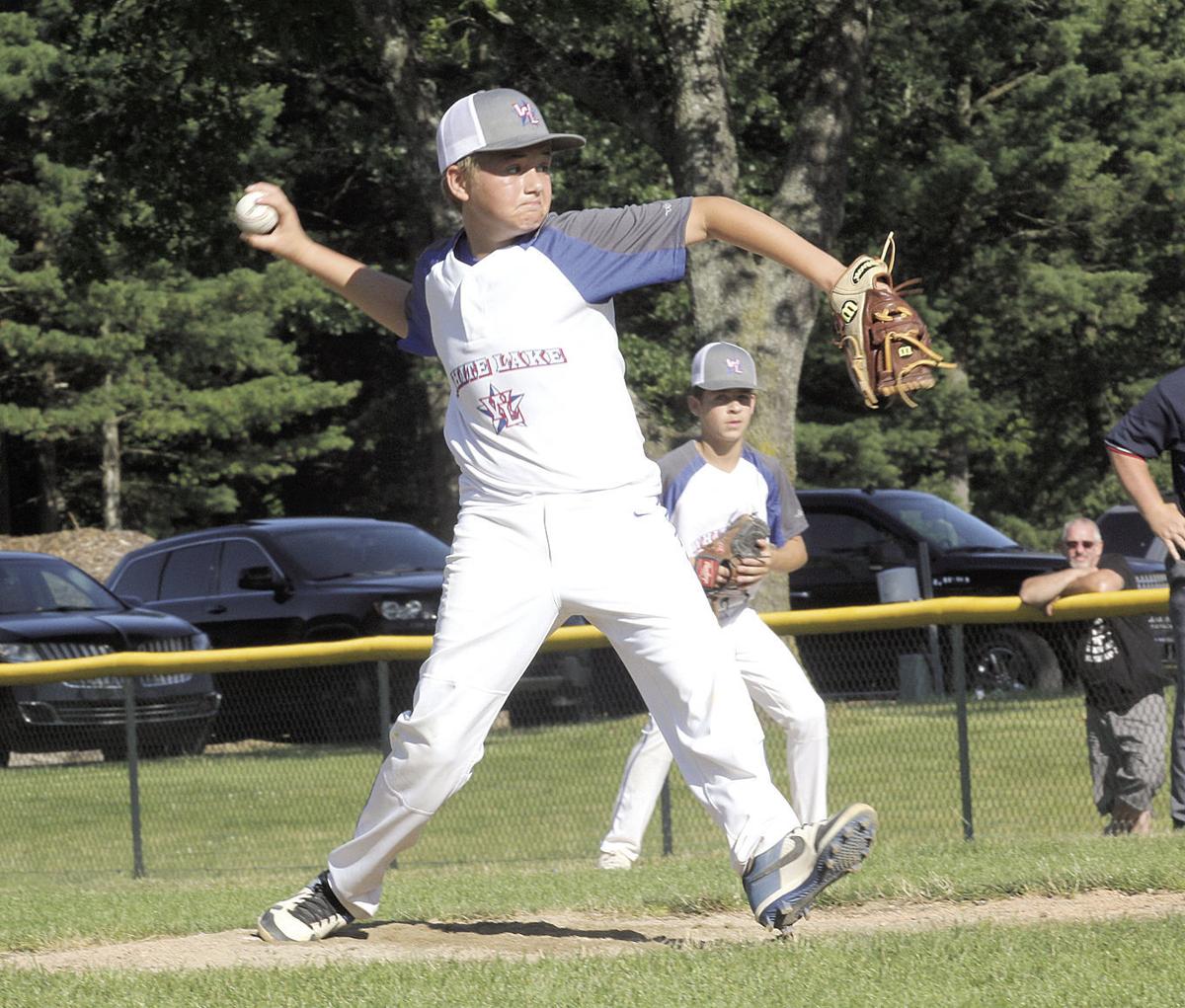 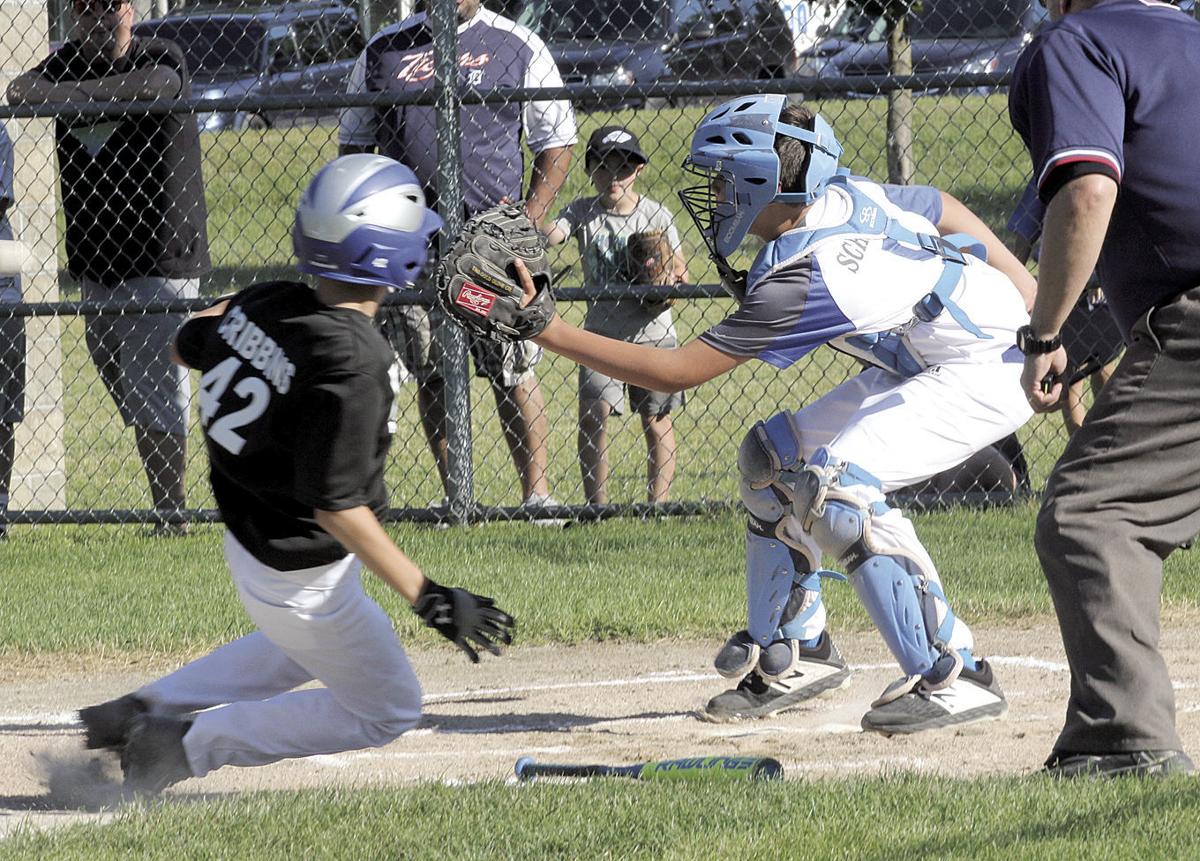 Above, White Lake catcher Cortland Schneider awaits a throw home to tag an Oakridge baserunner out during Thursday’s district semifinal game at Cullen Fields. Below, White Lake third baseman Cole Moss tries to tag out an Oakridge runner at the base. White Lake won, 6-5. 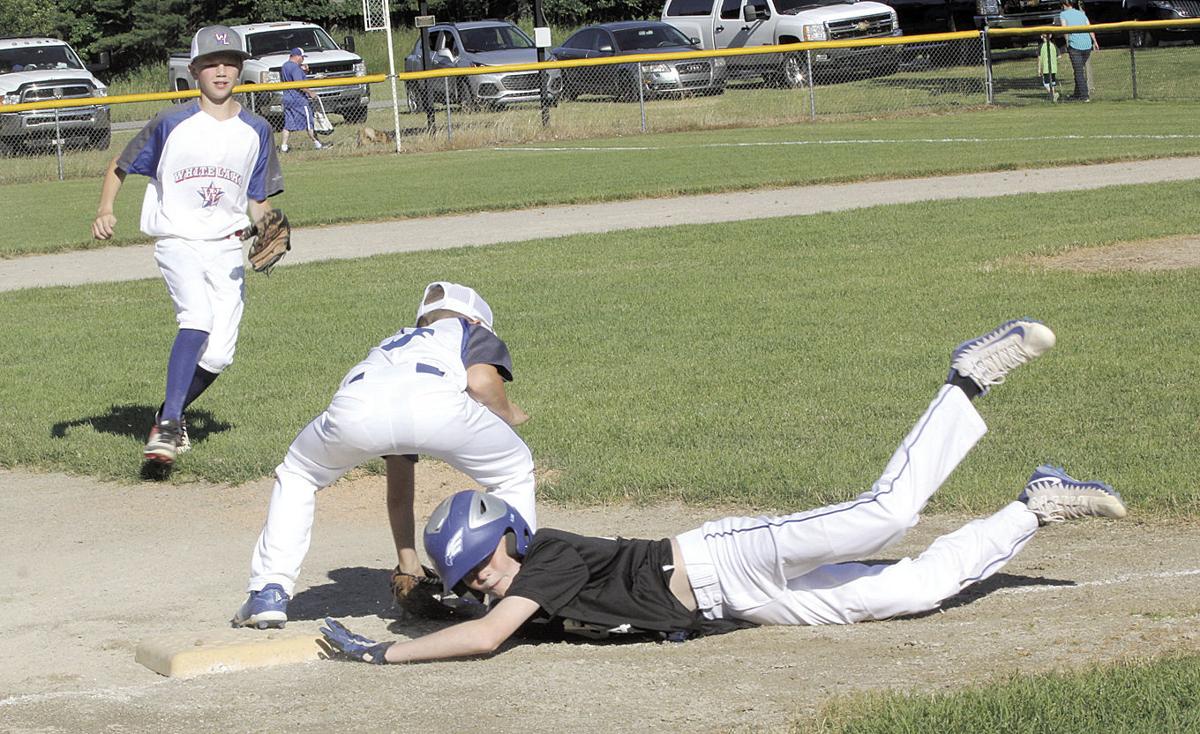 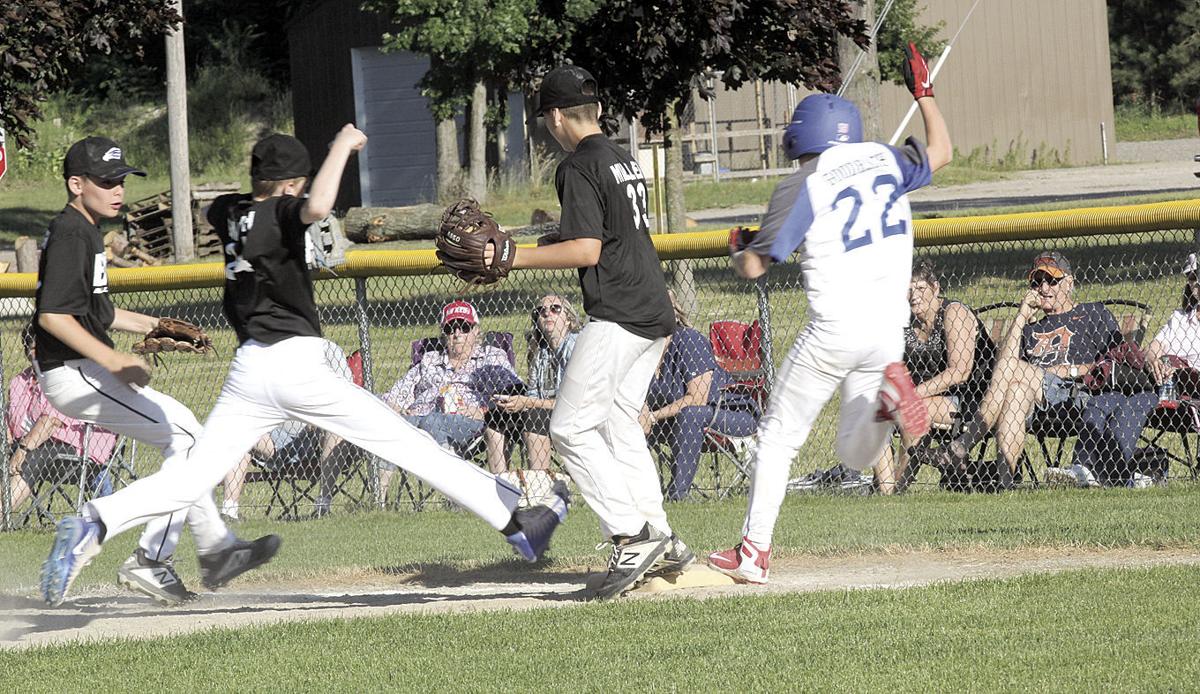 Above, White Lake catcher Cortland Schneider awaits a throw home to tag an Oakridge baserunner out during Thursday’s district semifinal game at Cullen Fields. Below, White Lake third baseman Cole Moss tries to tag out an Oakridge runner at the base. White Lake won, 6-5.

MONTAGUE — Despite being behind most of the game, the White Lake Little League 12U all-star team came up big when it mattered most Thursday at Cullen Fields, scoring four fourth-inning runs to edge Oakridge 6-5 and reach the finals, to be played Sunday against the Beach team.

The White Lake team entered the semifinal game as the top seed in its pool, and with several errors early in the game that led to runs, it appeared the pressure might get to the players. However, with some help from big bat and pitcher Eli Petersen, the team stayed in striking distance and took advantage of its big chance late.

Petersen’s two-run double in the third inning cut Oakridge’s early lead to 3-2. He later whacked a two-run single in the pivotal fourth inning, tying the game at five.

“Eli had a great day at the plate, driving all those runs in, and on the mound as well, throwing strikes,” White Lake coach Jeffrey Johnson said.

Petersen, who threw 4 1/3 innings before hitting the 85-pitch limit, faced a tough spot in the second when Oakridge got runners to second and third with nobody out, but he was able to limit the damage to one run with help from a timely double play by his teammates. The Eagles then took advantage of a couple of White Lake miscues to score twice in the third inning before Petersen’s double got White Lake back to within one.

“Even though they were behind, had some miscues that led to runs, and not being able to put the ball in play early, they continued to have that positive attitude, and it worked out in the end,” Johnson said.

White Lake had some issues making contact early against Oakridge’s tough starting pitcher, but when the Eagles hit their own pitch limit, the White Lake batters began having more success.

Oakridge scored twice more in the fourth to go ahead 5-2, but in the bottom of the inning, the White Lake stars got two straight walks from the bottom of their lineup to get things going. Ryver Jarka later coaxed a bases-loaded free pass to drive in a run, setting the stage for Petersen’s second big two-run hit. Jarka came across to score the go-ahead run on a wild pitch later in the inning.

Cashus Brown relieved Petersen in the fifth when Petersen hit his pitch limit and locked things down, allowing only one baserunner in his 1 2/3 innings of work.

Johnson said the White Lake team is experienced, noting that much of the team was on last year’s squad that reached the state tournament, and five players have older brothers who played in the state meet as well.

“(They) know what it takes in these tournaments to do things well and keep performing,” Johnson said.

Jarka will take the mound for White Lake Sunday in the finals, also at Cullen Fields, and with Beach coming into the game unbeaten just as White Lake is, it should be an exciting matchup.

“We have a great 1-2 pitcher (duo), and I can’t tell you which one’s (number) one and which one’s two, because they both do a great job,” Johnson said. “Ryver’s a lefthander that’s going to throw hard and right at you, so we’re pretty excited. If we make sure we play good defense, put the ball in play, and throw strikes, good things can happen.”