Players try to turn a double play during a June 13 tournament game at the Shoreline Smash, which the White Lake Rivals club team hosted. The tournament was their first game action of the season. 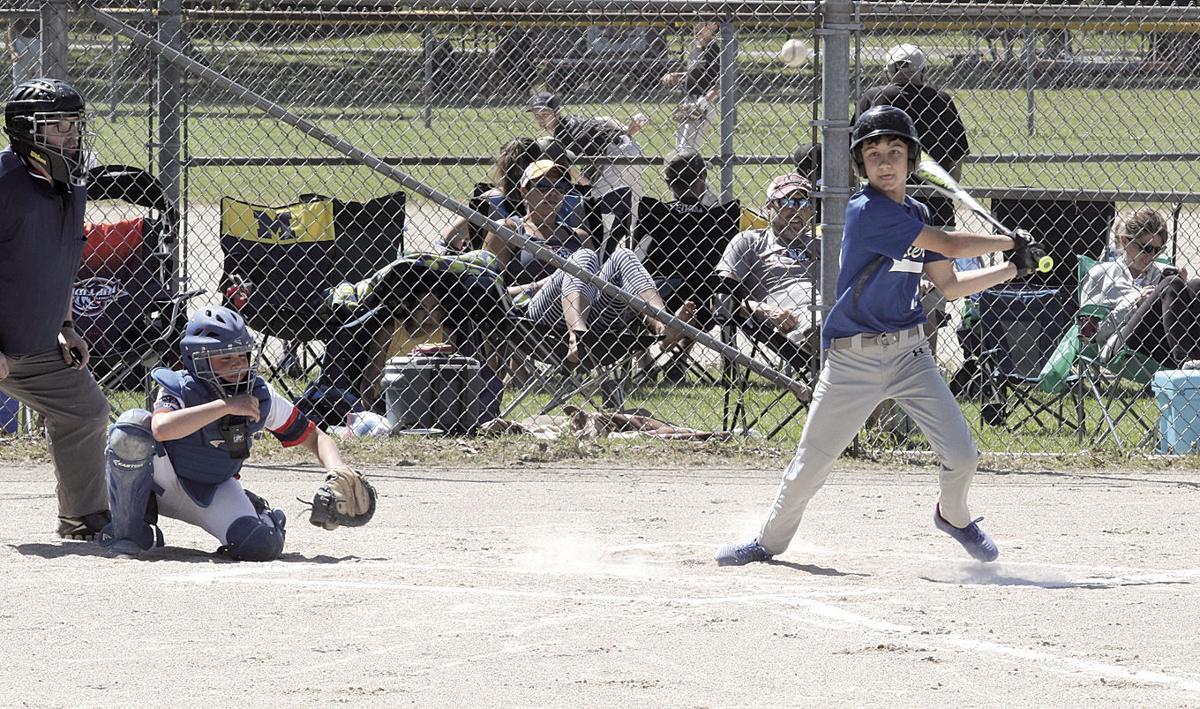 A player fouls off a pitch during the June 13 Shoreline Smash tournament. The White Lake Rivals club team hosted action at three area fields, including Funnell Field in Whitehall.

Players try to turn a double play during a June 13 tournament game at the Shoreline Smash, which the White Lake Rivals club team hosted. The tournament was their first game action of the season.

A player fouls off a pitch during the June 13 Shoreline Smash tournament. The White Lake Rivals club team hosted action at three area fields, including Funnell Field in Whitehall.

The White Lake Rivals youth baseball travel program has largely been alone on the local sports scene this summer, and it showed June 13-14, when the season-opening tournament it hosted, the Shoreline Smash, drew more participation than usual.

24 teams participated, including some higher-level competition from as far away as Petoskey and Detroit. Over 50 teams tried to enter the tournament after it was filled up. This was mostly because other tournaments have been scuttled in the summer of COVID-19.

The Rivals club had the advantage of being able to borrow off other guidelines that have been released nationwide, including, said club president Ron Smolen, Ohio’s reopening plan, the MHSAA guidelines, and the CDC.

“It was quite a heavy lift,” Smolen said. “Our club guidelines and best practices for playing baseball during the COVID-19 pandemic are for all coaches to follow, and parents and players received a copy and asked to follow them also. Having a player being part of the season moving forward has always been optional. We understand some parents and players may not feel comfortable still and we always respect those feelings and concerns. There were quite a few board meetings and discussions in a short period of time to make it all happen.”

The tournament went off well, said Kris Maddox, who’s on the Rivals board and whose sons, Gavyn and Chayse, each play for Rivals teams.

“I think it beat our expectations for participation and numbers and smoothness,” Maddox said. “You always hope a tournament runs smoothly.”

The Rivals club isn’t that old, having started in 2014. Smolen took note at that time that some of the local Little League teams were fading away because of the prevalence of travel baseball. He hoped to fill that void somewhat with a more affordable alternative to some of the more costly leagues out there. (Maddox said it costs between $400 and $500 to participate in Rivals, compared to numbers that can be over double that in other leagues.)

Smolen said Brad VanBergen of Winberg Construction and Curt Schaeffer of the White Lake Little League, who like Smolen each had sons going through Whitehall Schools at the time, also were involved with the formation of the league. VanBergen, Smolen said, coined the name ‘Rivals’ to recognize that Whitehall and Montague athletes, who often compete against each other, would be joining together to form this club.

Another mission for the Rivals team was to improve the success of the Whi\te Lake area all-star teams in state tournaments by getting their players work against some high-level competition. In that respect, the Rivals club seems to have done what it set out to; the White Lake All-Stars won district titles in 2017 and ‘18 and nearly did so again last season.

The Rivals club has of course grown since its beginning, Smolen said. The club began with two teams and has four this season, but has had as many as six in the past. Most of the players come from the Whitehall and Montague school districts, although there are some outliers.

“The big picture, numbers-wise, the kids that have gone out, we’ve been pretty happy with it,” Smolen said. “We’re getting the extra cuts and swings and innings pitched, and we’re seeing better competition. If we look at the overall purpose, White Lake Little League has done well. From the club’s perspective, we’re really on the right path. We have teams that are competitive...Overall we’ve been happy with what we’ve seen from the growth of the game.”

The construction of the new Viking Athletic Complex in Whitehall, Maddox said, was a boon to the Rivals program, as it enabled the team to host indoor practices during the winter (the club held sign-ups in the fall). That helps the Rivals club provide an experience that players would otherwise have to leave the immediate area to find.

Of course, when COVID-19 hit in full force in March and the state went into lockdown, the playing of any season at all seemed in jeopardy. Luckily for the Rivals players, the state was able to progress to allowing outdoor gatherings of up to 100 early this month, enabling teams to go back to practices in a mostly normal fashion. Up to that point, they’d been splitting into smaller groups to comply with the state’s Safe Start Plan.

Even with the teams back in action, of course, not everything is normal. High-fives aren’t allowed — one player in a game at the tournament fist-bumped his coach when he got to third base instead — and players aren’t permitted to share bats and helmets as they normally would. Catcher’s equipment can only be shared if sanitized between uses.

However, despite those hurdles, everyone involved was thrilled to have baseball back. Smolen said he was particularly pleased to hear about the visiting teams having good experiences at local restaurants and hotels, businesses that have been among the hardest-hit the past few months.

“To us it was more than a baseball tournament,” Smolen said. “It was nice to have baseball back and do it as safely as possible...The weather was perfect. It wasn’t too hot. It was like a gift from above. We spent a little more money by ordering more balls so as not to share them. We ordered a big garbage dumpster so sanitation was less of an issue. We sent all the (information) to clubs to make sure people knew we were quite serious about playing baseball, but that things were going to be different.”

In a normal season, the Rivals would be about done with their seasons by now, but because of the COVID-19 delays, they’ll continue to play into July. Maddox said a couple of the Rivals teams are set to play a tournament in Manistee this weekend, and the season will conclude with one in Grand Rapids close to the end of the month.

Maddox added that the club is considering plans for the fall as well, if MHSAA schools are not permitted to have fall sports. He said he’s glad his kids have been able to have some sports even amidst the pandemic, and encourages other kids to follow suit if they can, whether it be with the Rivals or elsewhere.

“The kids usually play Little League, and with that being canceled, we’re grateful for the opportunity to play some baseball and get out of the house,” Maddox said. “Any time they can practice, be around their friends and compete, it’s an all-around good experience for them.

“We encourage kids to come try out or to try out with other organizations. We have several in the area. Our goal is to continue to give an experience to kids locally to play. Hopefully the White Lake all-stars and county all-stars get that extra playing time, growth and development going into junior high and high school.”