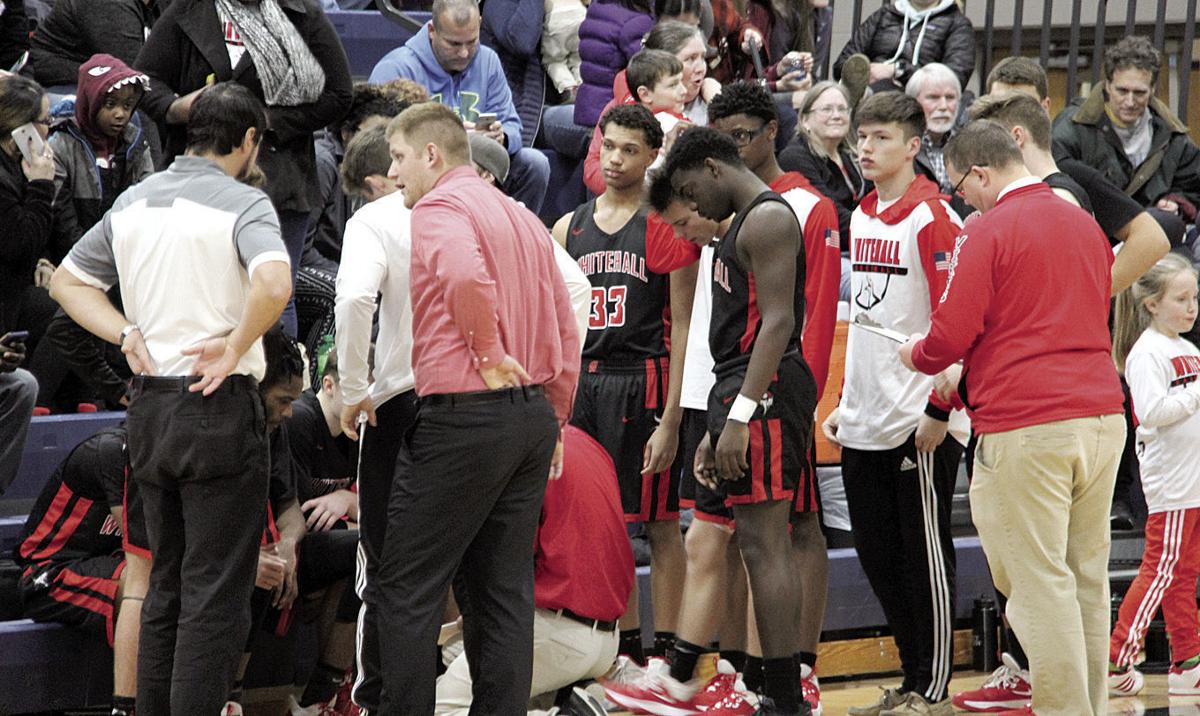 Whitehall JV coach Christian Subdon (center, in red) joins a team huddle during a timeout in a game against Montague this season. Subdon, who aspires to be a varsity head coach someday, is a key part of the Whitehall program. 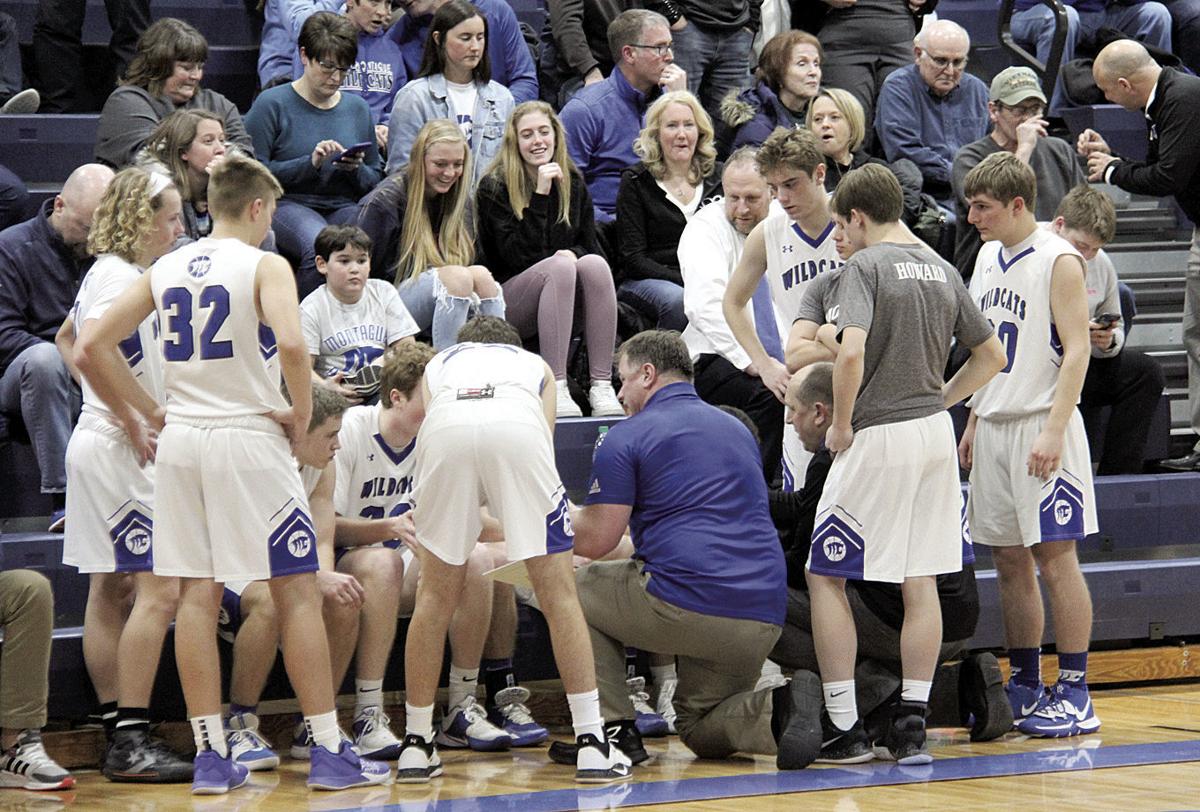 Whitehall JV coach Christian Subdon (center, in red) joins a team huddle during a timeout in a game against Montague this season. Subdon, who aspires to be a varsity head coach someday, is a key part of the Whitehall program.

Everyone who follows high school sports on even a casual basis probably knows many of the things varsity coaches do to keep their programs running. Perhaps fewer know how important the JV coach can be.

However, varsity coaches are clear: The program wouldn’t function as well as it does without its JV coach.

That’s true especially for two of the most recently successful JV programs in the area, the JV boys basketball teams at Whitehall and Montague. Their coaches, Christian Subdon and Bob Peterson respectively, do a ton to keep things rolling.

It helps in both those coaches’ cases that they carry a close relationship with their varsity coaches. Peterson has been working alongside Dave Osborne with the Montague program for close to a decade now, and Subdon played for Nate Aardema early in the latter’s varsity coaching career, leading to the two becoming close friends; Aardema was a groomsman in Subdon’s wedding a couple of years ago. Subdon became a teacher and coach, he said, in part because of Aardema, and he coached JV at Hart for three seasons before returning to Whitehall in 2018.

“It is special to me to have a young man value our program and want to continue to grow the program by having him around,” Aardema said of Subdon.

Subdon, who aspires to be a varsity head coach himself someday, is tasked by Aardema with doing a variety of things, most of which is stuff Aardema half-jokingly said “I don’t want to or am not good at”.

One of Subdon’s thankless tasks is to design and order the team’s warmup jerseys. Luckily, it’s a job the JV coach takes to easily.

“Nate absolutely hates that stuff,” Subdon said with a laugh. “I take some input from our captains and design them and I send it back to them. They end up having 10 to 15 ideas and I try to give them what they want. This year, I don’t know why, but they wanted hoods on their warmups and I got that for them.”

Subdon’s contributions are far from limited to fashion, though. Always more of a defensive-minded player when he was playing for the Vikings, partially due to the presence of scorers Tyler VanBergen and Aaron Russell on his team, Subdon has developed as an offensive mind. Aardema said he considers Subdon the de facto offensive coordinator for the program.

“He put in a new zone offense for us,” Aardema said. “He thought it worked on JV, and wanted to try it. The kids were receptive. He does coach on the JV, but he has a lot of varsity responsibilities as well. He sees it as our program, which is what you really want.”

Subdon also is effective in the role of “good cop”, getting players back on the same page with the varsity coaches if things are going poorly. As a younger coach whose memories of playing himself are still relatively fresh, it’s easy for him to relate to the current Vikings.

“I feel like I’m a pretty good bridge between the JV kids and Nate,” Subdon said. “That’s why I got into this and why I became a teacher. I love joking with the guys and knowing they can count on me. I have kids that call me and say they need to talk. That means I’m doing my job, if they trust me enough to give me a call and talk about something.”

In addition to Aardema, Subdon has taken things from another of his former coaches, Tony Annese, who now coaches the Ferris State football team, as well as current Hart varsity coach Adam Jerry, whose JV team Subdon led for three seasons.

“I’ve had the great opportunity of playing for and coaching for some great coaches,” Subdon said. “Tony is a madman, but one of the best guys you’ll ever meet. I learned a ton from Adam Jerry at Hart. He’s a great coach. He taught me about being that person for the kids that need it.

“I taught and coached at Hart for three years, and that was a shocker. I was in my little bubble in Whitehall. Adam is a perfect example of how to build a program from nothing to being competitive.”

While Subdon is early in what he hopes to be a long coaching career, Peterson has settled in to being the Wildcats’ JV coach, along with assistant Mark Unger. Peterson had previously coached football at various local stops, including Montague. He and Osborne both teach at Mona Shores, and those trips into work often provide both with the ability to trade program notes.

As with Subdon, Peterson does lots of things behind the scenes that are vital to the program.

“He’s always willing to do anything extra to help, as far as weightlifting, open gyms, or travel for kids to get them from here to there,” Osborne said of Peterson. “He’s a super advantage on the bench. He sees things on the bench that other coaches sometimes don’t see.”

That leads into something Osborne especially values in Peterson and any other member of his staff: the willingness to disagree.

“They’re not afraid to tell me if something should change or if something’s a bad decision,” Osborne said. “They know ultimately it’s my decision, but I appreciate that they’re willing to put themselves out there, that they’re not a bunch of yes-men and tell me everything is perfect when it’s not.”

Peterson, in turn, said Osborne’s willingness to listen to his assistants, even if he has the final call, creates a greater sense of belonging within the program.

“It fosters ownership in the program,” Peterson said. “It gives you the validation you’re going to be heard. Ultimately the decision rests with Dave, and what Dave’s done has fostered an evironment where you can go back and forth, debate, give your side of it. As long as you know that you’re heard, then it really doesn’t matter to me. He has to make the decision and he listens to your viewpoint.

Peterson’s work in developing players was rarely more evident than this past season, when a very young Wildcats’ team pulled five players up from the JV but still managed to put together a solid season despite a lack of experience entering the year.

Any coach, by nature, is competitive, so it would be easy for a JV coach to resist the idea of the varsity team taking away one (or more) of their best players and potentially hurting the team’s record. However, that’s never been a problem at Montague or Whitehall.

“We’re super fortunate that both Bob and Mark understand that it’s about building the varsity program,” Osborne said. “They’re more concerned with player development than with wins and losses. I don’t take kids unless we absolutely need them. It doesn’t affect their egos at all. They feel they’ve been successful if we have to take a kid off the JV and up to the varsity, and have confidence in doing so.”

Peterson added that the Wildcat JVs benefited in turn from the large amount of call-ups, because the team’s freshmen got more JV minutes than they otherwise would have. That, which he called “a win for everybody,” can have long-term benefits.

Aardema, who remembers when Tyler VanBergen was called up to the varsity when he was Annese’s JV coach, resulting in his then-red-hot JV squad going on a losing skid, brings that perspective when deciding when is an appropriate time to pillage Subdon’s JV team. This year, he called up Red Watson early in the season, and Watson was a key part of the Viking varsity.

“If you leave a kid down, he plays most of the game, and you have to make sure it’s worthwhile when he comes up,” Aardema said. “We try to have in-depth conversations about the varsity’s needs. It’s tough.

“In reality, (Subdon) looks at it as, ‘These are my players.’ He wants them to have success at the highest level they can. If they have to go up to varsity, he trusts we have the best interests of the players and program in mind.”

While Aardema jokes that Subdon’s responsibilities are often things he doesn’t want to do, Subdon knows better and appreciates that he, like the Wildcats’ JV coaches, is empowered.

“When Tony was giving the reins to Nate, Nate was doing it all, and Nate’s been giving me a lot of responsibilities,” Subdon said. “I’m that person on the bench that’s breaking stuff down. Nate trusts his assistant coaches. Hopefully when I’m a varsity coach, I can take that and pass it on to the next person. I’ve learned a lot of things from being thrown into the fire.”

Peterson, meanwhile, got to have the experience of coaching his son Chase the past four seasons, most of which Chase spent on the varsity. He said he couldn’t have asked for a better varsity coach for his son than Osborne, and added that the father/coach line can be a tough one to walk

“I’m glad we did it, glad I had the experience, and I’m also glad it was one year,” Peterson chuckled. “It’s hard to find sometimes where you walk in the door and you’re not dad, you’re coach.

“I think particularly for my son and his personality, I couldn’t ask for better varsity coaches than Dave Osborne and Randy Lindquist, in terms of how they approach kids. Nothing against anyone else I’ve coached with, but I think they’re the perfect match.”

Osborne said Bob did a great job with his son, but that his strength lies in that he wants to develop every player and does his best for each one.

“I think it’s awesome that he’s invested in the program and his kid, but I don’t think it matters to him whether it’s his kid, my kid, or his neighbor’s kid,” Osborne said. “He’s going to do anything he can to get everyone ready for the varsity.”

That’s any JV coach’s job — really, it’s any coach’s job, period: Prepare the players for the time when you don’t coach them anymore.

When it all comes down to it, the JV and the varsity, while they play in different games, are all chasing the same goal.

“We always play first in a game,” Peterson said. “I feel like it’s our responsibility to play with high energy to set the tone for the varsity game. Energy is just a matter of how hard you work. From a JV perspective, that gives the JV kids an ownership of the varsity program from how they play.

“By the time they walk out for their senior years, even though they’re varsity players, I feel like I had a little bit to contribute to their development. Mark Unger’s my assistant, and we’d all say it’s our program. We all feel strong ownership, and that makes it fun. In some ways, there’s not a separation.”