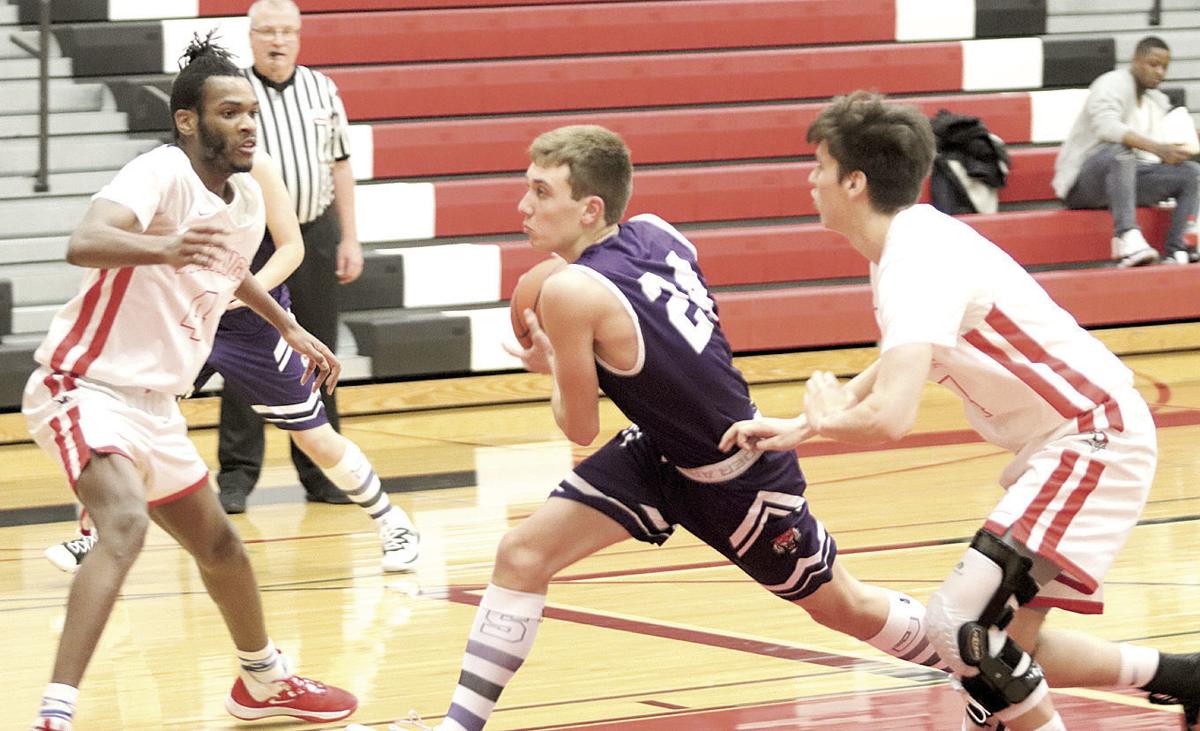 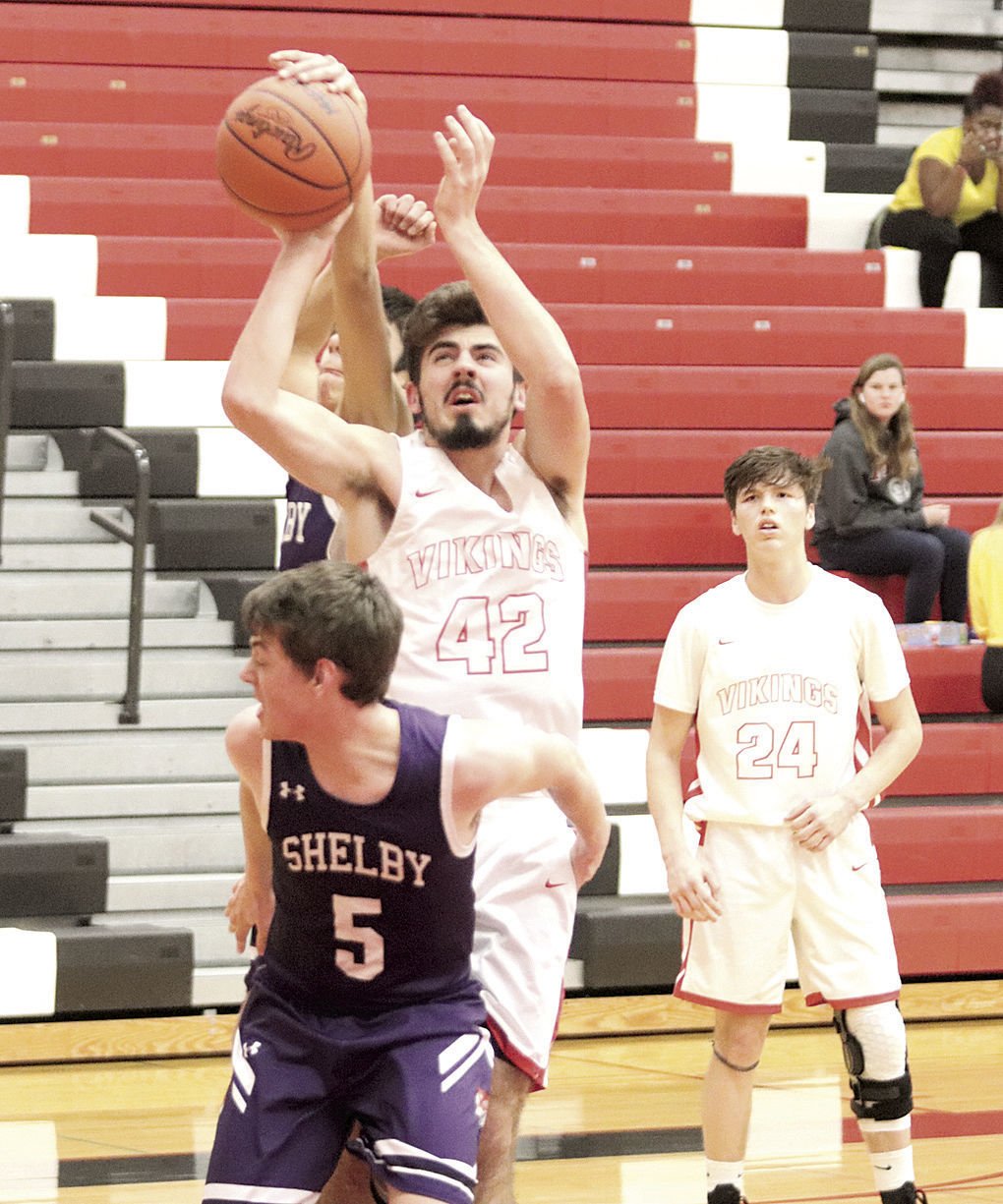 Whitehall’s Andrew Durbin (with ball) is fouled on a shot attempt during the Vikings’ 53-30 win over Shelby. Durbin scored 15 points in the game. 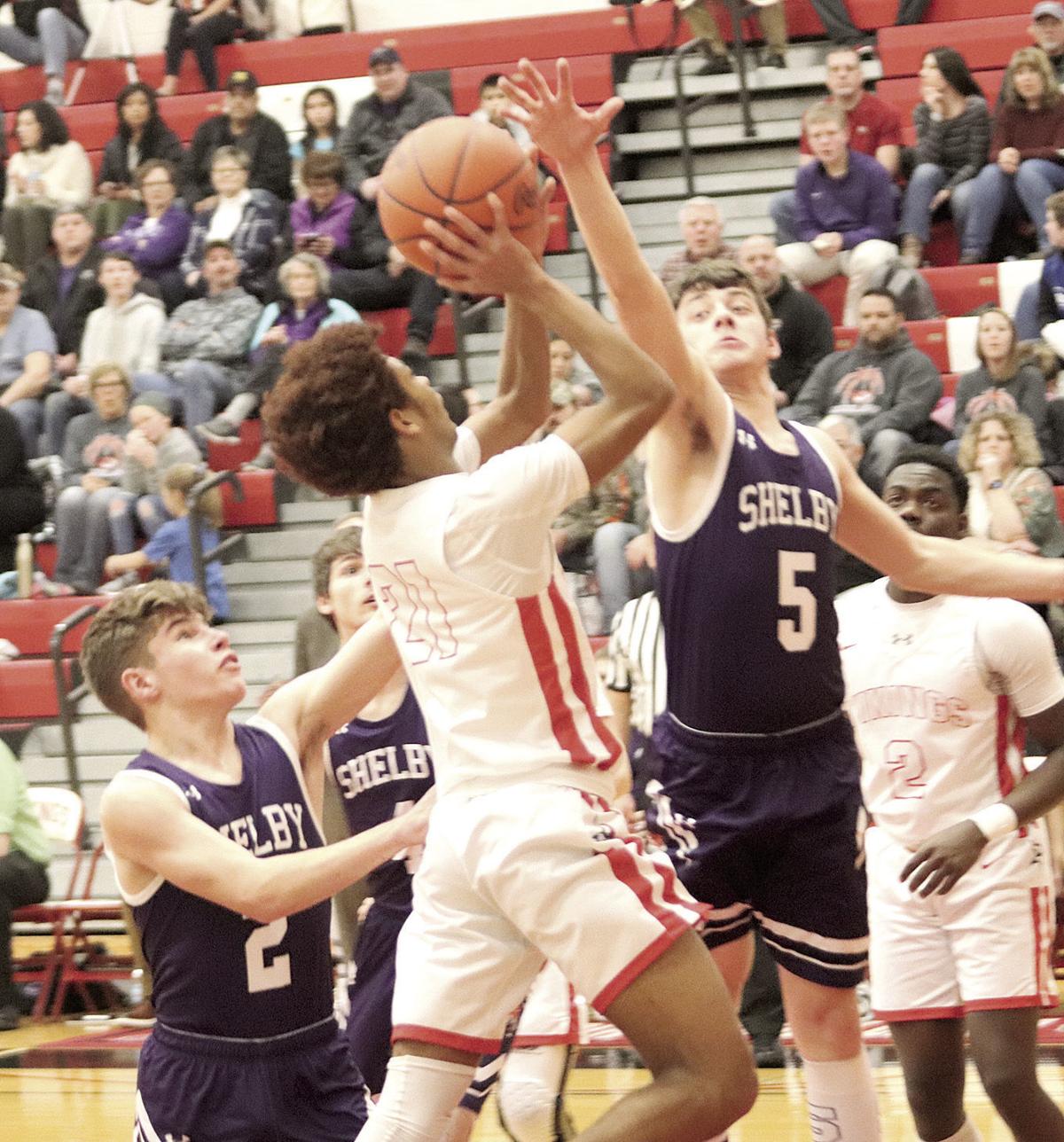 Whitehall's Red Watson (with ball) goes up for a shot against Shelby's Jarrett Furman during Thursday's WMC game at Whitehall. The Vikings won 53-30. 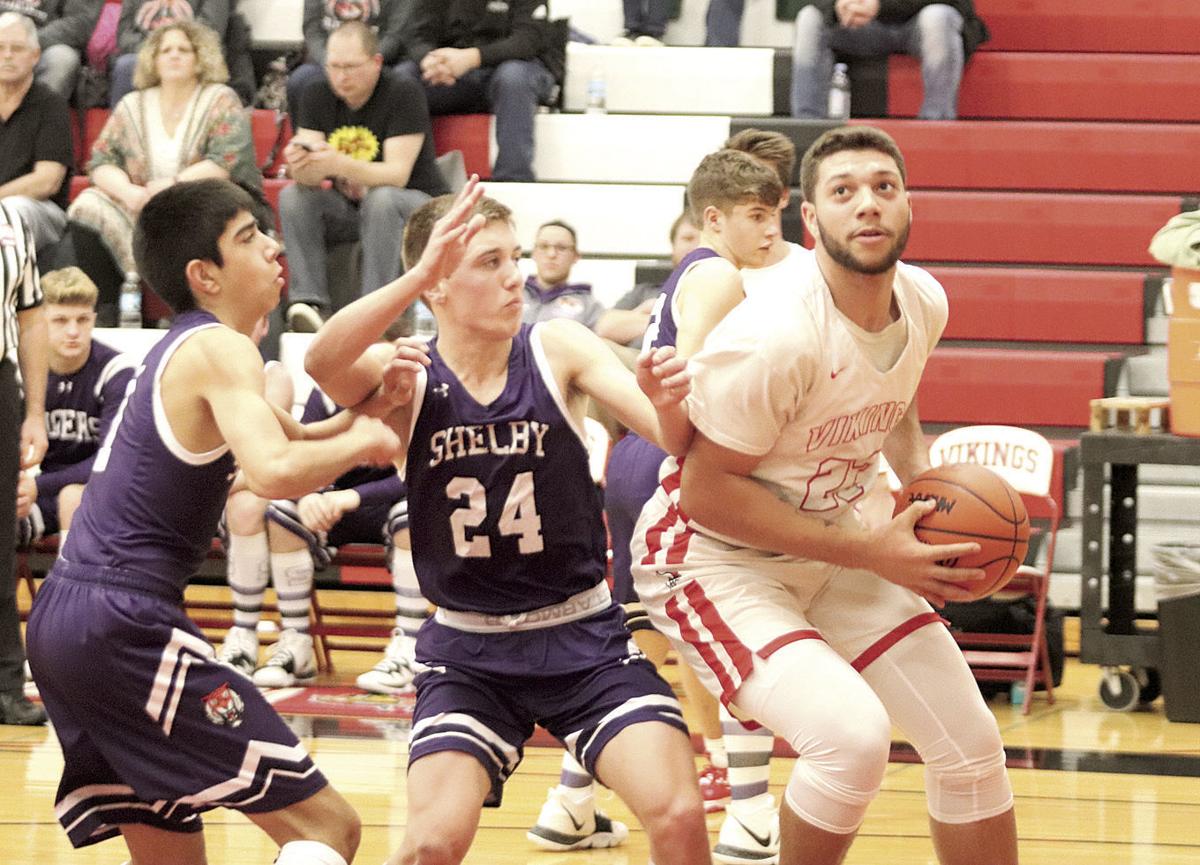 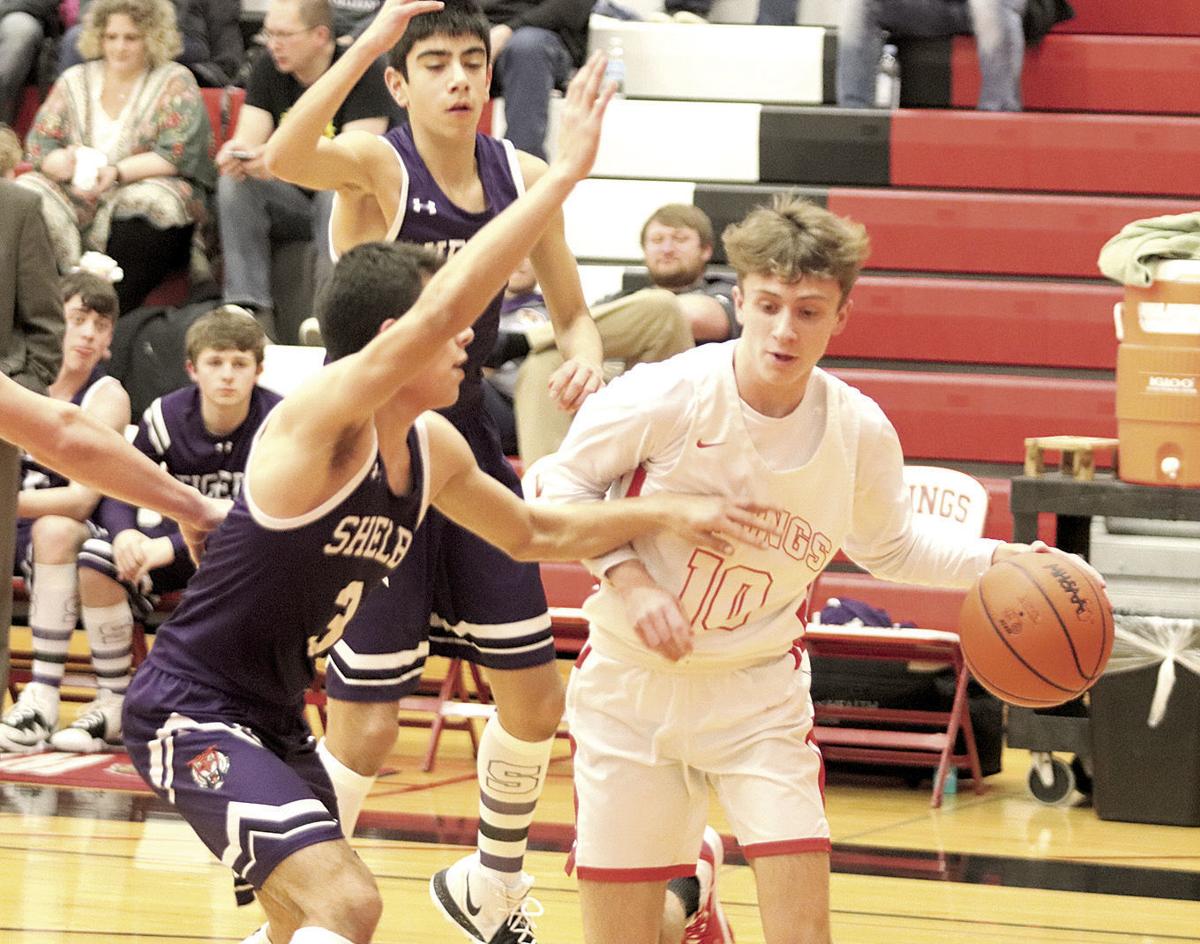 Whitehall's Addison Bluhm (right) tries to get to the basket against Shelby's Joseph Hayes during Thursday's WMC game at Whitehall. The Vikings won, 53-30. 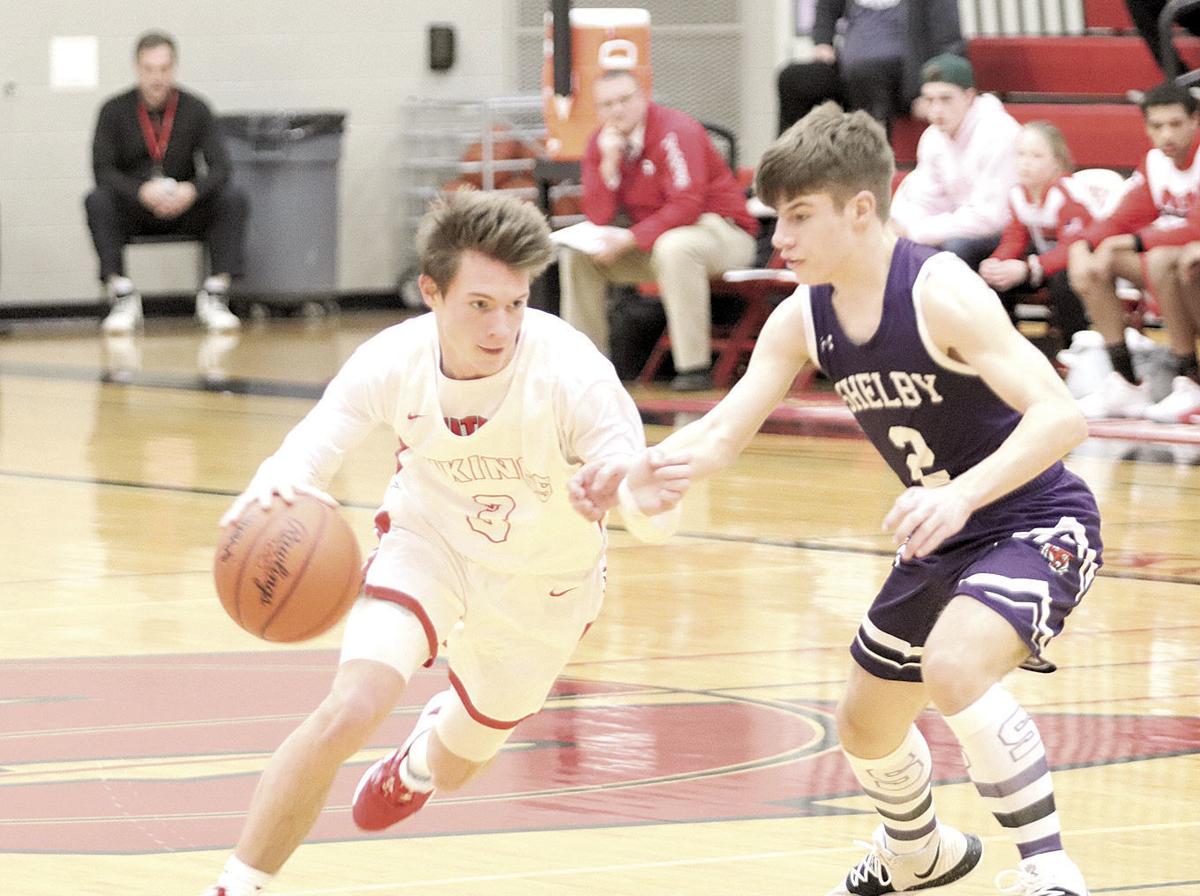 Whitehall’s Andrew Durbin (with ball) is fouled on a shot attempt during the Vikings’ 53-30 win over Shelby. Durbin scored 15 points in the game.

Whitehall's Red Watson (with ball) goes up for a shot against Shelby's Jarrett Furman during Thursday's WMC game at Whitehall. The Vikings won 53-30.

Whitehall's Addison Bluhm (right) tries to get to the basket against Shelby's Joseph Hayes during Thursday's WMC game at Whitehall. The Vikings won, 53-30.

WHITEHALL — Basketball can be complicated, but sometimes basketball can be simple. Thursday night, Whitehall’s game plan against Shelby could be summed up as, ‘We have big guys and they don’t, so let’s take advantage.’

The Vikings pounded the ball inside early and often with great success, cruising to a 53-30 win over the Tigers.

Whitehall (5-6, 4-4 West Michigan Conference) went to the basket with forwards Dayton Cole and Andrew Durbin consistently throughout the game, exerting its height and bulk advantage down low. Durbin scored 15 points in the game, and Cole had 13.

“I think in the first half, we were 12-of-17 from (inside the arc) and 0-for-10 from three,” Vikes’ coach Nate Aardema said. “It didn’t take too much to figure out what we needed to be doing. That’s our advantage over a majority of teams, is our size and the strength of some of the guys. I thought we did a good job real early, and we got away from it a couple of times, and we got back to it.”

Whitehall got off to a fast start, taking an 11-2 lead, and led 28-14 at halftime. After Shelby opened the scoring in the third quarter, the Vikings ripped off the next seven points, including a three-point play by Cole and a steal and breakaway basket by Addison Bluhm, essentially sealing the game.

The win was impressive considering Whitehall was dealing with some illnesses that sapped a few players. Luckily, Andrew Durbin was not among them.

Durbin, known as ‘Tex’ by his teammates and coach, was a major presence throughout the game, especially in the first half, where he scored 11 points. Cole was unstoppable in the paint and if not for some foul trouble, he might have had even more than his 13 points and seven rebounds.

“We’re kind of figuring out who to sub, and Tex is a great option with his hustle, smarts and experience,” Aardema said. “Dayton is just really tough to stop down there, especially if you’re undersized. It’s almost a helpless feeling, I think. Just banging against him in practice once in a while, he’s physically very imposing.”

The Vikings’ guards were less of a factor offensively than usual because of the inside-focused game plan, but they played solid defense throughout the contest and sparked a few fast breaks with impressive steals.

“I was surprised Red only had nine (points),” Aardema said of Red Watson, who also passed out a team-high five assists. “It felt like he scored more than that. They did a great job getting into the lane and making the right pass. I thought Red and Addison, in the third quarter in particular, did a good job against their half-court trap.”

The Vikings, still riding high after upsetting unbeaten Fremont, checked a key box by not letting down against the Tigers, have set themselves up for a potential run in the second half of the season. However, if that’s to happen, it will have to start Tuesday against unbeaten WMC leader Ravenna.

“We try to break the season into sections,” Aardema said. “Obviously we’re starting the second time through the league, which gives us an opportunity to see where we’re at...I thought we played really well Tuesday and I thought we did enough well tonight. There is some optimism. We have another big one on Tuesday.”

MUSKEGON — Reeths-Puffer and Union were playing a tight, back-and-forth game Friday at R-P before the Rockets dominated the final quarter and pulled away to beat Union 66-51.

The win moved R-P into sole possession of second place in the O-K Black Conference, a game behind Muskegon.

MONTAGUE — Montague was the latest team to fall short against undefeated and Division 3 #5 Ravenna Thursday night, dropping a 60-42 decision.

The Wildcats (6-5, 4-4 West Michigan Conference) played the Bulldogs evenly for a quarter, but were outscored 16-7 in the second as the visitors began flexing their muscles. Ravenna outrebounded the Wildcats 30-23 in the game and shot 52 percent from the field.

The Vikings (4-6) played a remarkable offensive game, shooting over 50 percent from the field, and outrebounded the Packers by nearly a two-to-one ratio, 35-19.

“Huge win for our guys, as we needed a confidence boost and to see the value of hard work and what playing for 32 minutes will result in,” Vikes’ coach Nate Aardema said.

R-P (8-4, 4-1 O-K Black) blew open a six-point game in the second quarter by going for 20 points. The Rockets did even better in the third, exploding for 27. The Knights had only 20 points in both quarters combined.