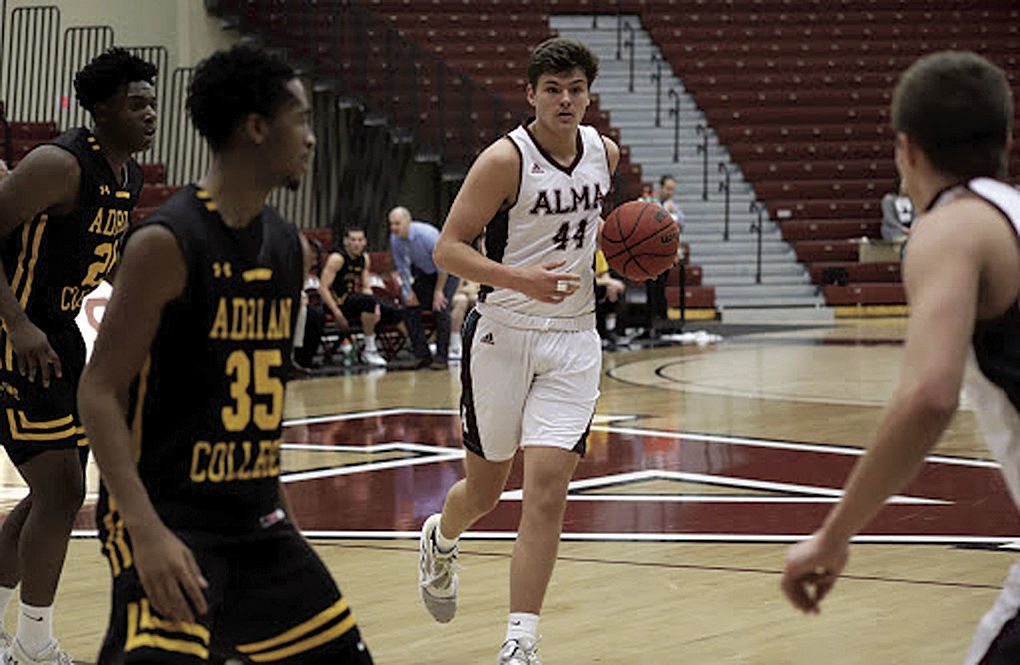 Alma's Brandon Rake (44) controls the ball on the perimeter during a game against Adrian College. Rake had a solid sophomore year for Alma, as the team improved from five wins to 13. 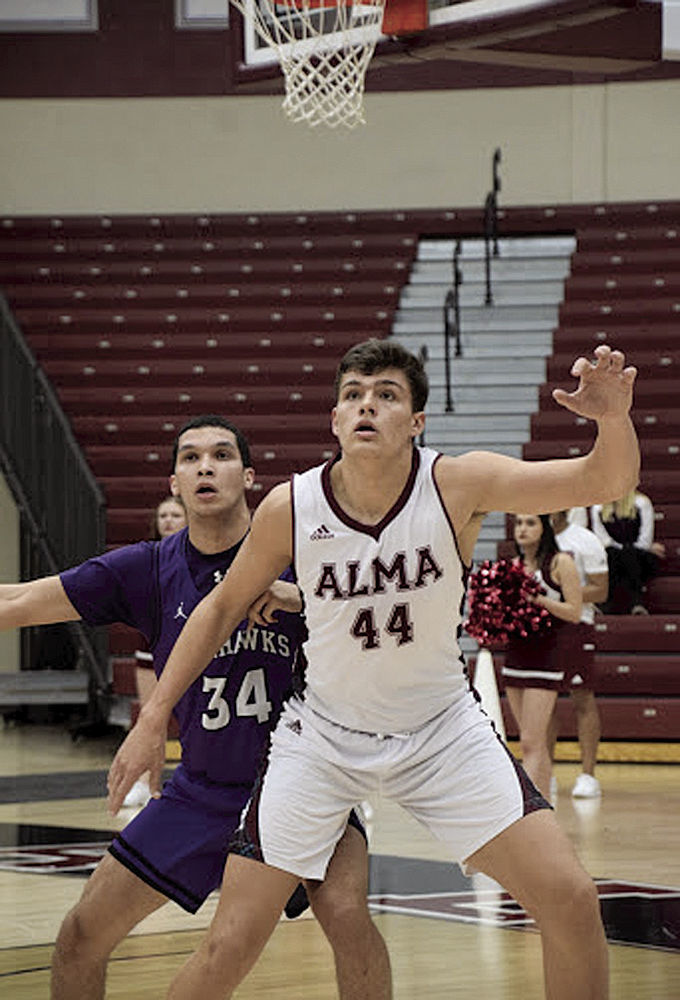 Alma's Brandon Rake (44) awaits a pass into the post during a Scots' game. Rake, a sophomore, had a strong second season and is working towards his junior campaign despite the COVID-19 pandemic.

Alma's Brandon Rake (44) controls the ball on the perimeter during a game against Adrian College. Rake had a solid sophomore year for Alma, as the team improved from five wins to 13.

Alma's Brandon Rake (44) awaits a pass into the post during a Scots' game. Rake, a sophomore, had a strong second season and is working towards his junior campaign despite the COVID-19 pandemic.

Whitehall alum and Alma College sophomore basketball player Brandon Rake was fortunate that his Scots were able to complete their 2019-20 season before COVID-19 shuttered sports nationwide. However, that doesn't mean he is any less ready to get back out on the court.

"I'm just ready to get out on the court and compete with my teammates," Rake said. "I'm getting really bored at home. I want to get back out on the court. We're all a family on the team. We're pretty much all brothers."

Rake and his brothers did a fine job improving their program in 2019-20. After head coach Sam Hargraves, who recruited Rake to Alma, resigned after a trying 2018-19 campaign that produced a 5-21 record, new coach Ryan Clark arrived with a more defense-focused system. Alma's players, Rake included, responded to the change and improved the team's record by eight games, to 13-13, this past season.

An attempt to reach Clark for this story was unsuccessful.

Whitehall coach Nate Aardema said he didn't get a chance to see his former star play in person this past season, but he caught a glimpse of Rake's improvement last summer when Rake competed in the Whitehall summer basketball league.

"He had like 40 points (in one game), drop-stepping and dunking," Aardema said of Rake. "He transformed his body. There's a difference when you're playing three sports. He was probably about 260 (pounds) and playing offensive line and defensive end (in football), and then you get to basketball and drop a lot of weight, and then he put it back on when he goes to throw in track. You see how talented he really is when he gets the chance to zone in."

Aardema added that despite the physical difficulties Rake faced in high school juggling his weight from sports season to sports season, he never displayed frustration with it.

"Brandon was such a hard worker and he never complained," Aardema said. "Football shape is so much different than basketball, but he never said, 'Coach, I'm tired.' He was dominant for us."

Rake took that off-season work back to Alma and was a key performer for the Scots in 2019-20, starting 25 of the team's 26 games. He upped his scoring average to 7.1 points per game (from 5.7 the year prior) and also grabbed 5.6 rebounds per game.

With other scorers on the team — four Scots averaged in double figures, five in Michigan Intercollegiate Athletic Association play — Rake's own scoring wasn't a point of emphasis, so he focused on beefing up his defensive play, with great results. In addition to his rebounding, Rake also finished in the MIAA's top 10 in blocked shots, with 17.

In coming seasons, Rake figures to be more involved offensively, as four of the team's top five scorers graduated after last season.

"I've really focused on my defense and rebounding," Rake said. "In upcoming years, I'll start thinking about scoring more, but I was able to find my spot on the team. Being able to focus on that has been nice, and now I will focus on other parts of my game."

Since being sent home from Alma amidst the pandemic, Rake has continued to keep in shape, although he's had to improvise. Usually he'd be in a weight room constantly at this time of the year, and that hasn't been an option in the age of social distancing. He's been able to do some body workouts, he said, as well as a healthy dose of running.

"I've had no gym time with my teammates," Rake said. "The youth team camps we usually have were shut down. It's been a lot more isolated. It's been harder this year. I haven't been able to get in a gym to shoot around. My driveway's been my basketball court."

Rake said coaches and players have virtual meetings about once a week to share workouts, watch film, and to build team camaraderie. (In addition, the team's strength coach, Chris Holton, sends workout ideas along every so often.) He said, though, that the conversations when the coaches log off might even be more important, as the players keep each other motivated to work.

"The coaches will sign off and us players will just talk about what we're doing for workouts, just to hold each other accountable and keep on doing stuff to get us better for the winter," Rake said.

For Rake, one small silver lining from not having the same structure he normally would in an off-season is that he's been able to discover that self-motivation and take ownership of his own workouts.

Self-motivation is already a key factor for players at the Division III level, as Rake is. Unlike other NCAA levels, D-III players do not receive any form of athletic scholarship by rule, so to sign up to play a sport, with no financial benefit, means you truly have to love it.

Although many of Alma's top scorers graduated after this past season, Rake said he and his teammates are looking forward to this coming winter and proving the improvements they made last season were no flash in the pan.

"We're excited to come back and have everyone ready to go and compete at a high level," Rake said. "We picked up some good wins this year and we can duplicate those, and also elaborate on more. We have the personnel and the work ethic. We just have to be accountable."