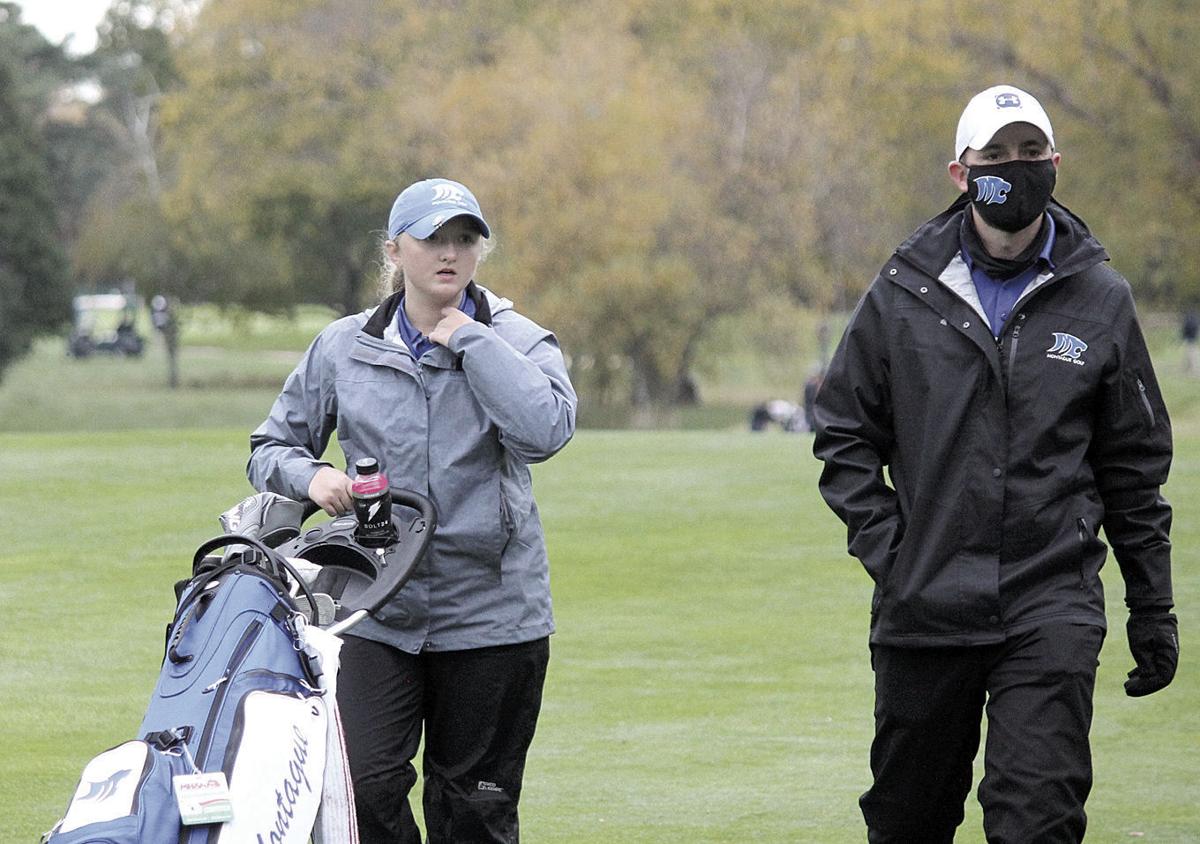 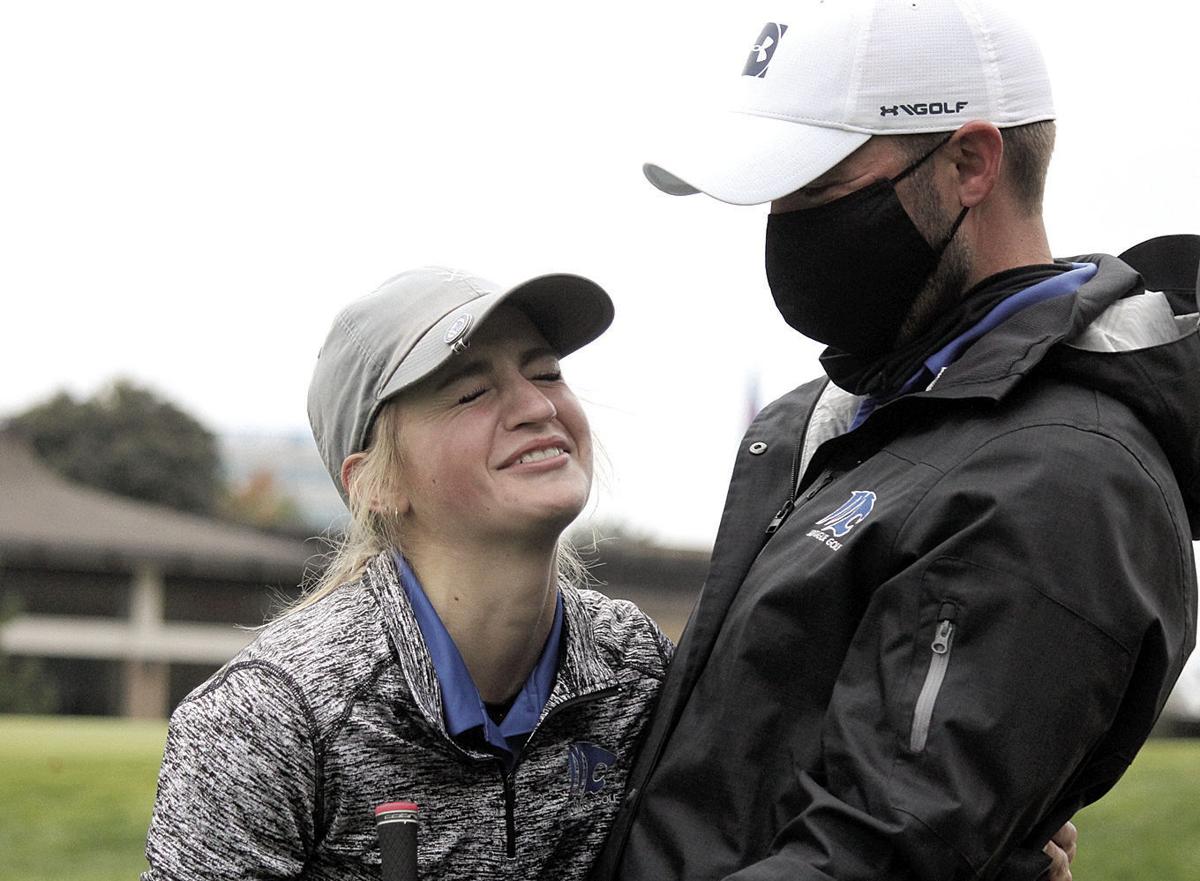 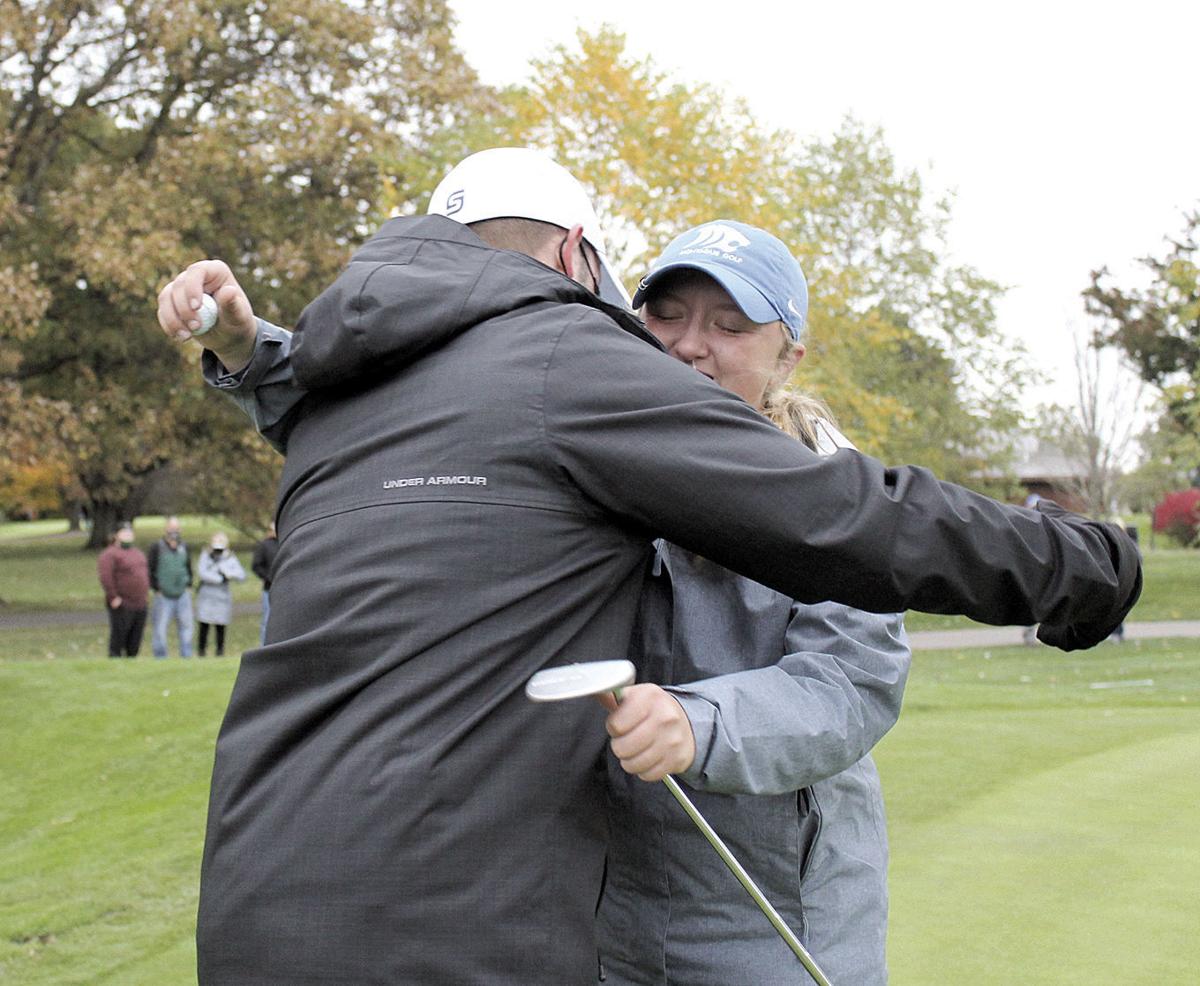 An emotional Katie Unger hugs Montague golf coach Phil Kerr after completing her round at the state finals Saturday. The Wildcats won the state championship.

An emotional Katie Unger hugs Montague golf coach Phil Kerr after completing her round at the state finals Saturday. The Wildcats won the state championship.

Montague’s girls golf state championship, which the team earned in dominating fashion Saturday at Michigan State’s Forest Akers West course with a school-record score of 343, has many authors. Wildcats’ coach Phil Kerr, though, has to be the headline.

It’s not just because Kerr started the program in 2016, after the ‘Cats had had a couple of girls play for the boys golf team over the previous two years and Kerr noticed interest among more girls. The coach has also built a strong bond with the players, which led to a strong bond between the players as well.

Kerr’s imprint on the program is clear whenever you talk to one of the Wildcat golfers. The answer to almost any question that comes up is sure to come with a name-drop of the Montague coach.

“I think he’s the best coach we could possibly have,” Wildcats’ junior Gabby Moreau said of Kerr. “There’s not a better coach for me. I’ve really had a strong bond with him the past few years. He’s helped my golf game tremendously. He’s taught me everything I know about the game. He’s really worked with me in special areas, like putting. I’ve improved tremendously in putting over the last year. He’s the reason I’m the golfer I am today.”

A year ago, when Montague made its first trip to state, then-senior Kennedy McDonald credited Kerr for the team’s rapid improvement, especially due to his focus on the fundamentals and emphasis on keeping things simple for the team.

“He just gives us the clear-cut fundamentals of what we need to be doing, and focuses on those a lot,” McDonald said at the time.

Like any good coach, though, Kerr repeatedly deflects credit to his players. When the Wildcats won the title, Kerr said he wanted his players to have at least as much of a voice in the ensuing wrap-up articles as he did.

“These girls are the ones that have to go and get the pressure,” Kerr said.

Don’t tell that to the players, though.

“He has a lot to do with our success,” junior Orianna Bylsma said. “He’s the one who pushes us to get better, encourages us when we get down on ourselves. He really helps us with everything. He helps us with our swings, helps us mentally and physically. He encourages us that we can do this, even if we don’t have the (advantages) other schools have. We have one coach and he does it all. He’s amazing.”

When nerves threatened to get to the Wildcat girls leading into the state tournament, Kerr turned the pressure around on his team, telling him they were nervous because they could win it all, and that few other teams had, as he put it, earned the right to have nerves. It was an important message to deliver after the team had gotten off to a slow start at the regionals, and the strong start that came along at the finals made it clear the message got through.

“Coach Kerr told us to just play our own game and to play calm,” Wildcat senior Katie Unger said. “You’re going to have bad shots and bad holes. You just have to stay in it and stay calm. Going into it, we just had to play like a regular invitational. The scores would eventually do the talking at the end.”

Of course, Kerr was nervous too, not that he’d ever have told the girls that.

“I felt confident we’d shoot in the 350s and thought that would be enough, (but) if things went sideways and we ended up in the 360s, someone could come get us,” Kerr said. “With the app and live scoring (the MHSAA used live scoring at the tournament), if someone capable got off to a hot start, (maybe) our girls panic, or (another team) gets confidence. That was a worst-case scenario, but you plan for those going in.”

The rise of the program has been incredible to witness, but even more so to be a part of for Kerr and his players.

“It’s just been crazy,” Kerr said. “This is the first girls state title in any sport for Montague. They’re super proud of that. They’re just so proud to stand alongside the Montague history and get their name written on the trophy or on a banner. They’re super excited for everything that’s going to come in.”

And while the Wildcats were understandably not yet ready to focus on it just yet, the ride might just be beginning for them. Unger and Brown will graduate from this team, but Bylsma and Moreau will be back, along with freshman Mackenzie Goudreau, who came on strong late in the season and even led the team in scoring in one meet. There is a strong pipeline of talent developing on the JV roster as well.

“We haven’t talked a ton about it because we were trying to be in the moment,” Brown said. “I think they feel pretty confident going into next year, and Ori and Gabby being the seniors. They’ve both been there. They both started as freshmen, went to state their sophomore year and won state their junior year...I hope they can do great things next year.”