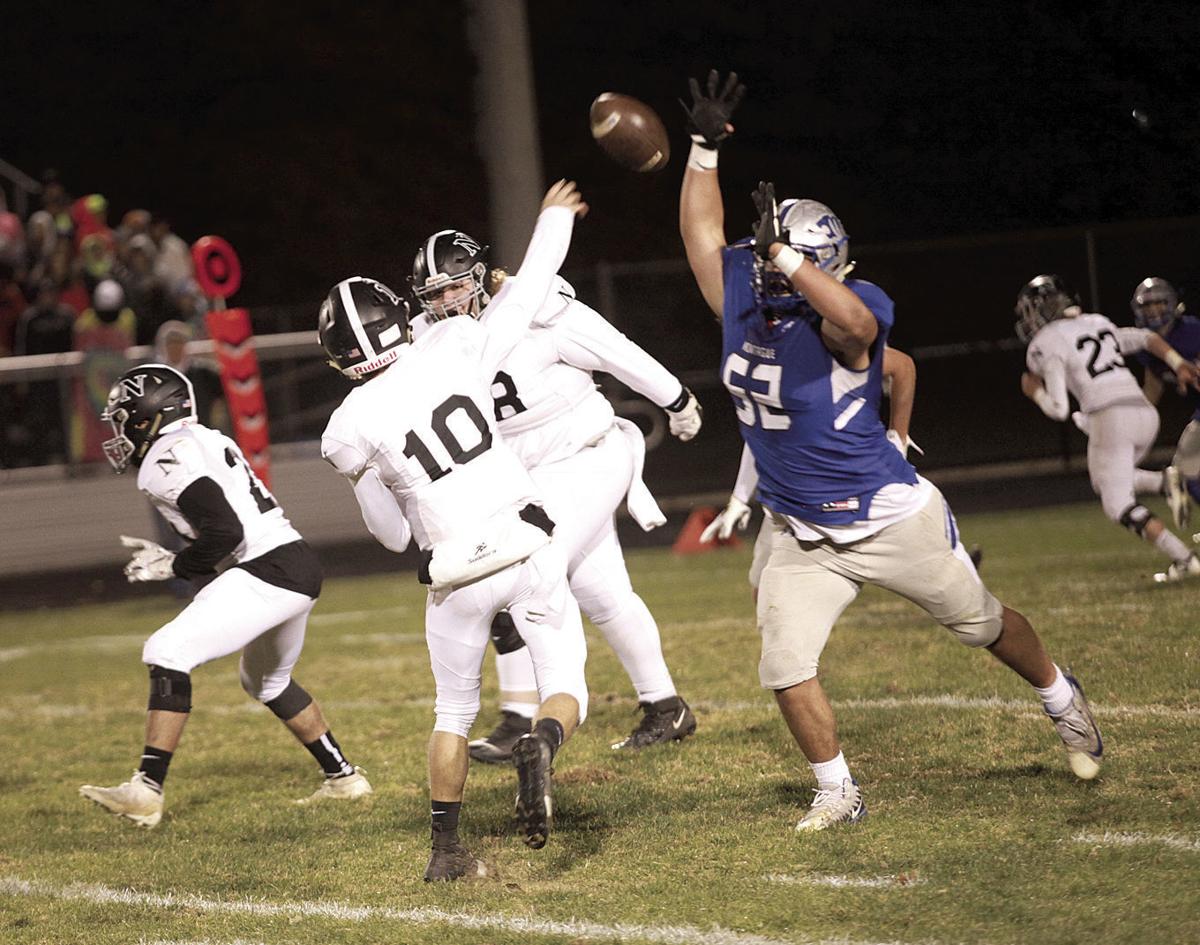 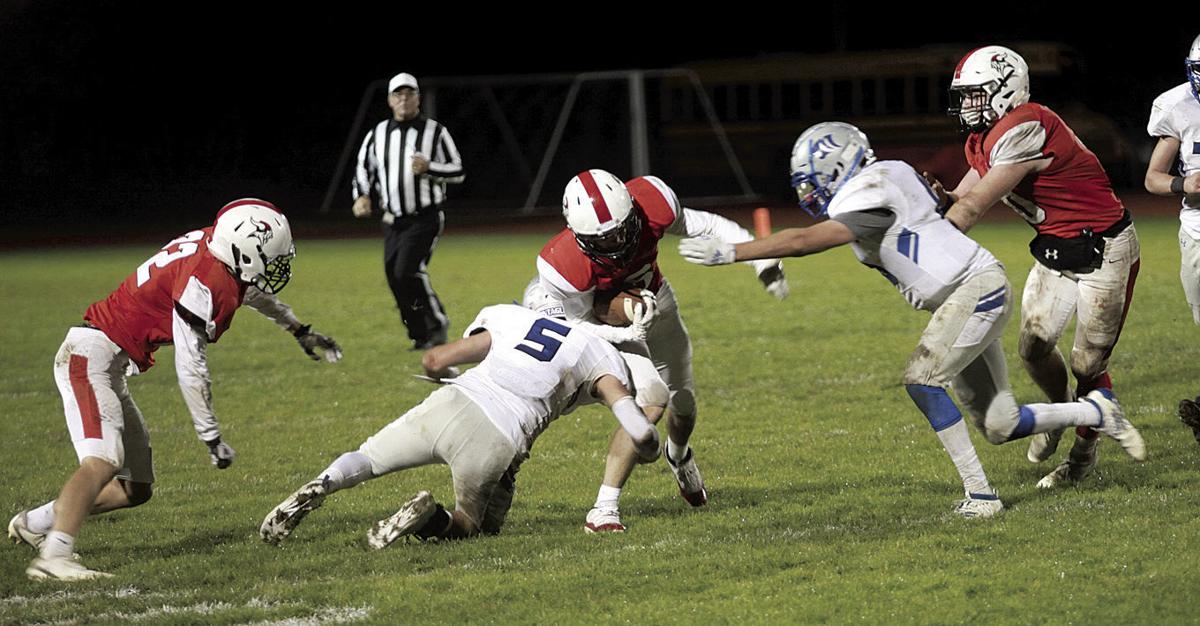 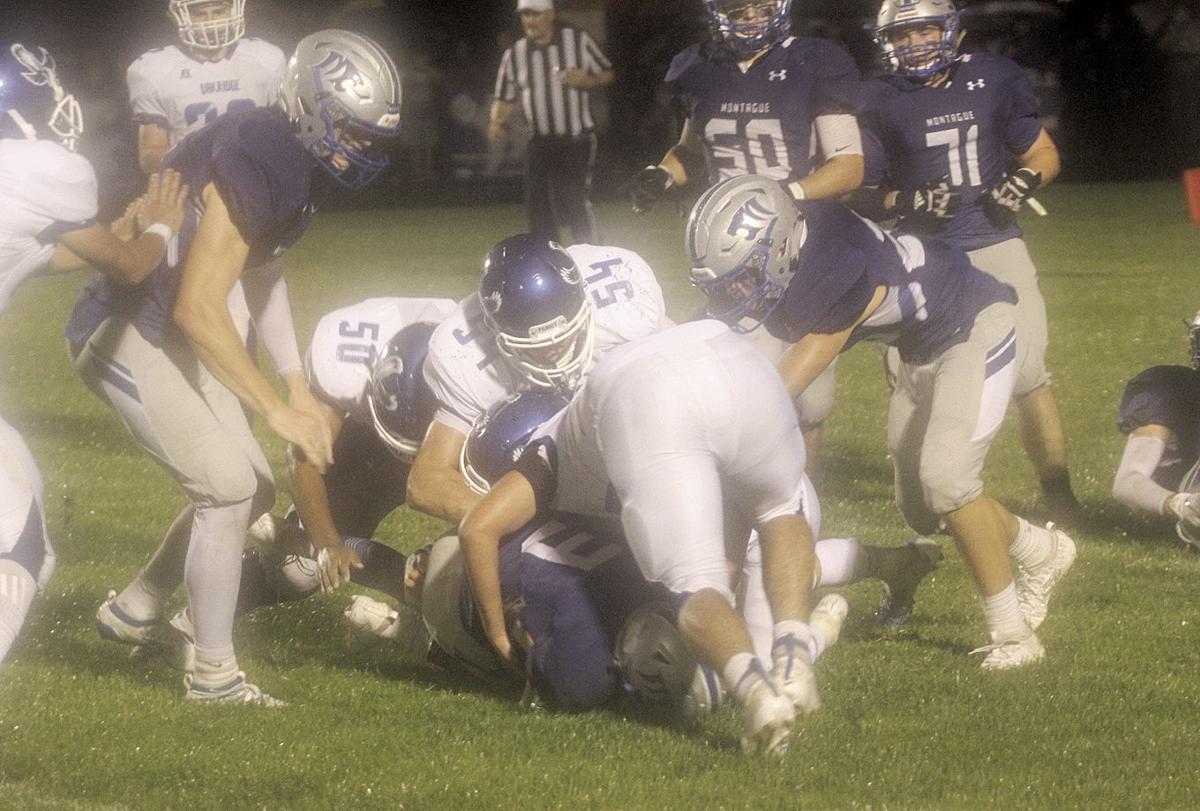 Montague's defense makes a stop against Oakridge during Friday's WMC game at Montague. The Wildcats lost, 15-13. 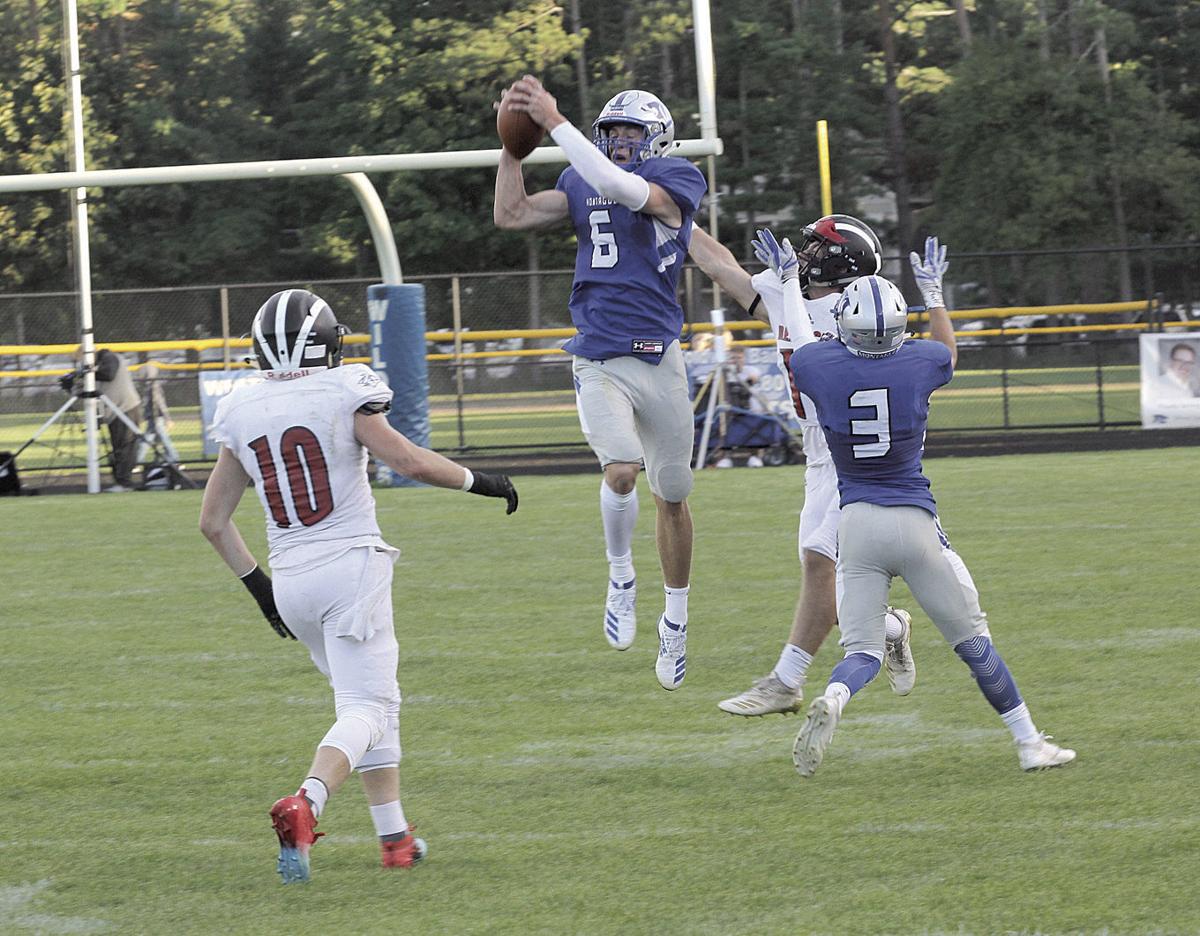 Montague’s Brennan Schwarz (6) grabs an interception during the Aug. 30 football game against Reed City. Austin Whitehead looks on for the Coyotes. Montague’s defense has led the way for the team this year. 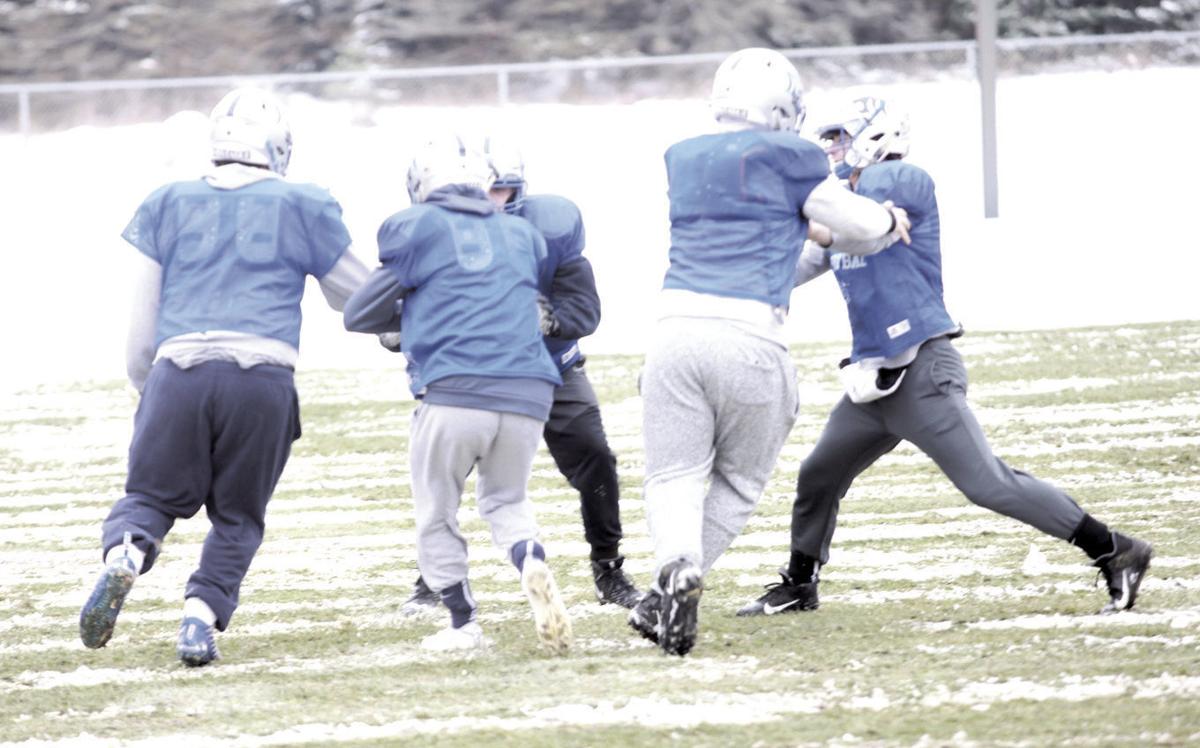 Montague's defense makes a stop against Oakridge during Friday's WMC game at Montague. The Wildcats lost, 15-13.

Montague’s Brennan Schwarz (6) grabs an interception during the Aug. 30 football game against Reed City. Austin Whitehead looks on for the Coyotes. Montague’s defense has led the way for the team this year.

MONTAGUE — As Montague prepared for this weekend’s regional finals matchup against Sanford Meridian, and a chance to win a regional at home for the first time in program history, the defense in particular was locked in.

One reason was that the visiting Mustangs don’t pass much — they attempted six passes in each of their district victories, over Ithaca and Hemlock. That’s a matchup senior linebacker Mark Vanderleest relishes.

“All we’ve been talking about all week is that we love playing these running teams, because we just get to play physical each play,” Vanderleest said. “We read our key and then just run downhill as fast as we can and make a play. Everybody on the sidelines has been ready and happy to play this game.”

The other reason was that Meridian running back Brady Solano decided, for some reason, to poke the bear.

Interviewed for a Michigan Sports Now article that ran on Wednesday, Solano, who has rushed for nearly 300 yards in Meridian’s two postseason victories, took a mild shot at the Wildcats. The senior called them “one of those flashy teams (that) make a lot of noise outside of football” and saying “we like to think what we do best is make noise inside the game”.

Whatever Solano’s motivations, by the time Montague took the field for practice on Thursday afternoon, his quote had been printed out and affixed to every Wildcat’s locker.

“I don’t know what was said or what, but our guys with social media nowadays, they get a hold of stuff so fast and they were sharing some of it at school (Thursday),” Montague coach Pat Collins said. “I don’t know why people do that...For some reason, our guys, maybe more so than other teams, get really really fueled over stuff like that. I don’t know, but not a good move on their behalf. But I get it. They’re just trying to motivate themselves, too.”

Whether Montague players have really taken that comment personally or are just using it as fuel is anyone’s guess, but they certainly made clear Thursday that it’s on their minds.

“As the season’s went on, we’ve made plays all over the field,” Vanderleest said. “We’ve made our statement on the field. So it’s kind of a shot in the leg, saying that about us.”

The Wildcats have hardly needed extra motivation on defense this year. Through 10 games, they’ve allowed just 10.4 points per game, well ahead of the pace of even last year’s state finalist team, which was allowing just under 17 points per game through 10 contests.

Two seniors, Vanderleest and Brennan Schwarz, have led the way for that defense. The duo were the top two tacklers on last season’s team, too, accumulating 183 solo stops between them. This year they’re at 93 combined solo tackles.

Vanderleest has been the leader, a fast-moving and experienced linebacker who’s been able to be in on most plays. Vanderleest’s success comes from not making things too complicated, he said.

“The coaches do a good job getting him into a position each week to read what’s going on, so he pretty much knows the play before it even happens,” Collins said of Vanderleest. “He’s able to play fast because he knows what he’s doing.

“And people don’t know this about him, but he’s actually really fast. It helps to be able to run when you’re 190 pounds, too. For a lineman on offense, you might think he’s not really fast, but he’s probably one of the fastest guys on the team.”

Schwarz, who also has a team-best five interceptions from his secondary spot, said the defense is “on the same page” more so this year than last, accounting for the extra success.

“I feel like we’re more team-oriented,” Schwarz said. “We all love each other. Not that we didn’t last year, but we’re all on the same page and we all know what the plan is and that we have to do our jobs.”

Schwarz’s numbers are all the more impressive considering he’s played most of the season with a partially torn patella tendon. He will need surgery after the season but expects to be ready for baseball season in the spring, where he was all-state as a sophomore before missing last year with an injury.

The playbook of ‘run first, second and third’ that Meridian employs evokes memories of last season’s semifinal matchup with Traverse City St. Francis, a similarly ground-based offense that the Wildcats stonewalled, holding to just a touchdown in a victory.

“They’re a little more in your face in terms of what they’re running on offense (than St. Francis was), but very similar in some respects, that they are going to pound you with ball control,” Collins said of Meridian. “They’ve got a quick quarterback (Cameron Metzger) who can keep it on the perimeter...They just want to keep the ball in their hands, keep you off the field, grind the clock and grind out yards.”

With that in mind, the obvious key is to stop the run. However, the Wildcats know to be mindful of the pass, because like many run-heavy teams, Meridian is always ready to unleash a surprise throw on an unsuspecting opponent. The Mustangs threw two touchdowns against Ithaca in their pre-district win.

Montague, on paper, would appear to be the favorite, but this is the regional finals, and nothing can be taken for granted.

“I’m feeling like they have a solid team,” Schwarz said. “They have some studs. Our defense is known to shut down the run. I feel like we’re pretty well prepared for that. We just need to work on (not giving up) the big plays, and we’ve been working on that a lot in practice.”

The Wildcats have never won a regional at home — each previous regional title was earned on the road or at a neutral site. That adds an extra layer of anticipation to the big game.

“What a great opportunity,” Collins said. “It’s really been a year of opportunities...They’ve got to take advantage of it. It’d be awesome if they could pull it off.”