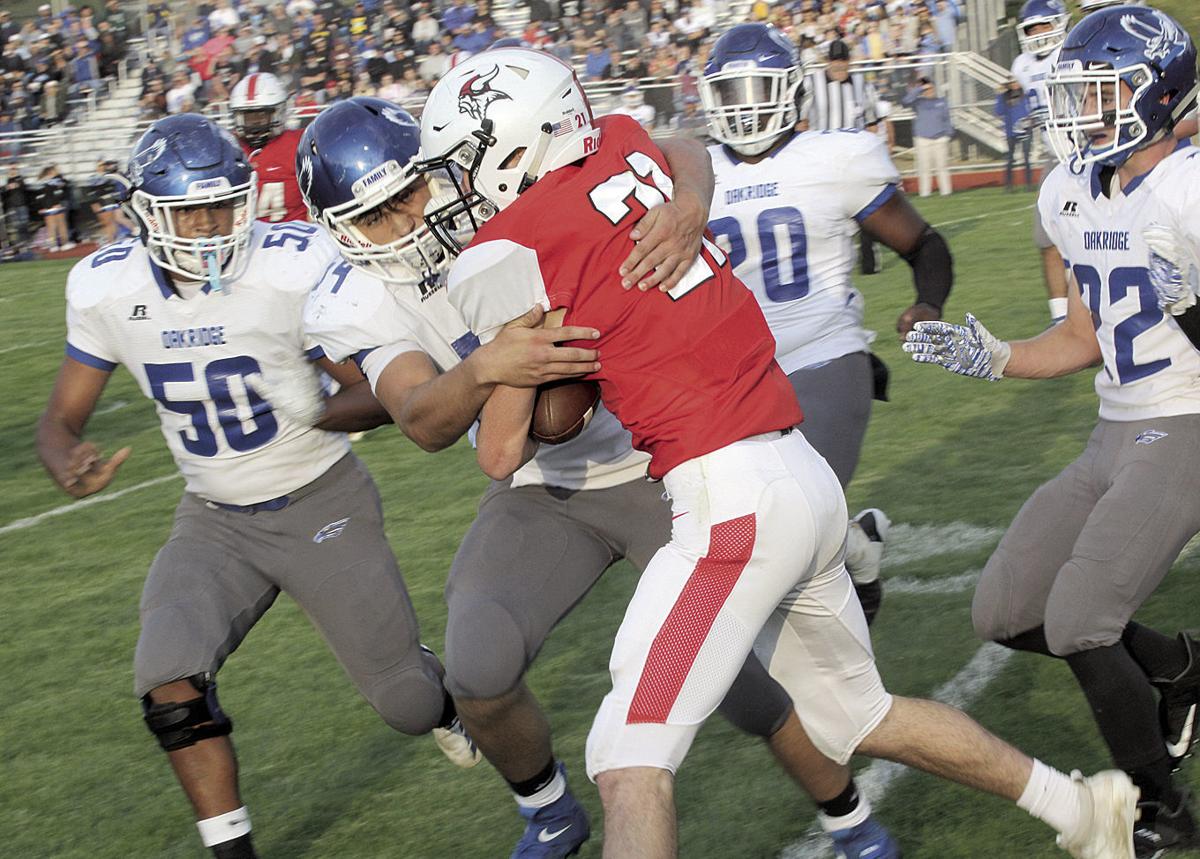 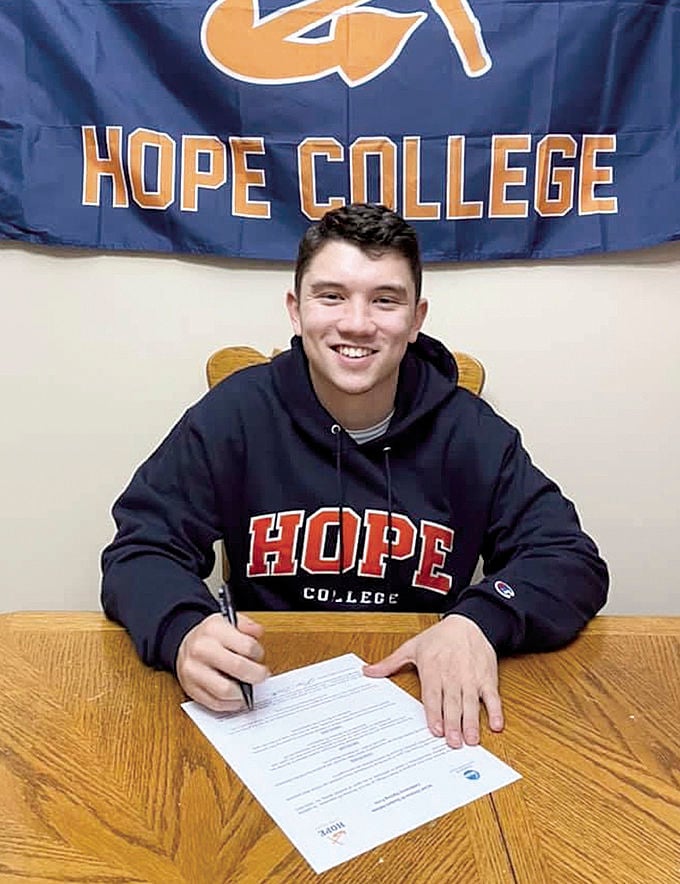 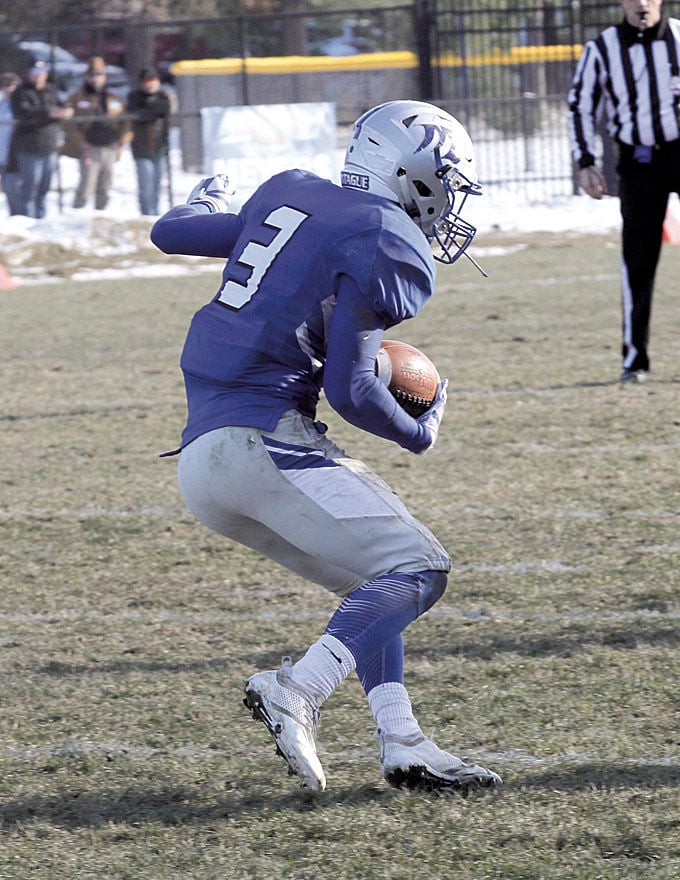 Montague’s Johnny Monette heads upfield with the ball during last season’s regional game against Sanford Meridian. Monette will be playing at Hope College this fall. 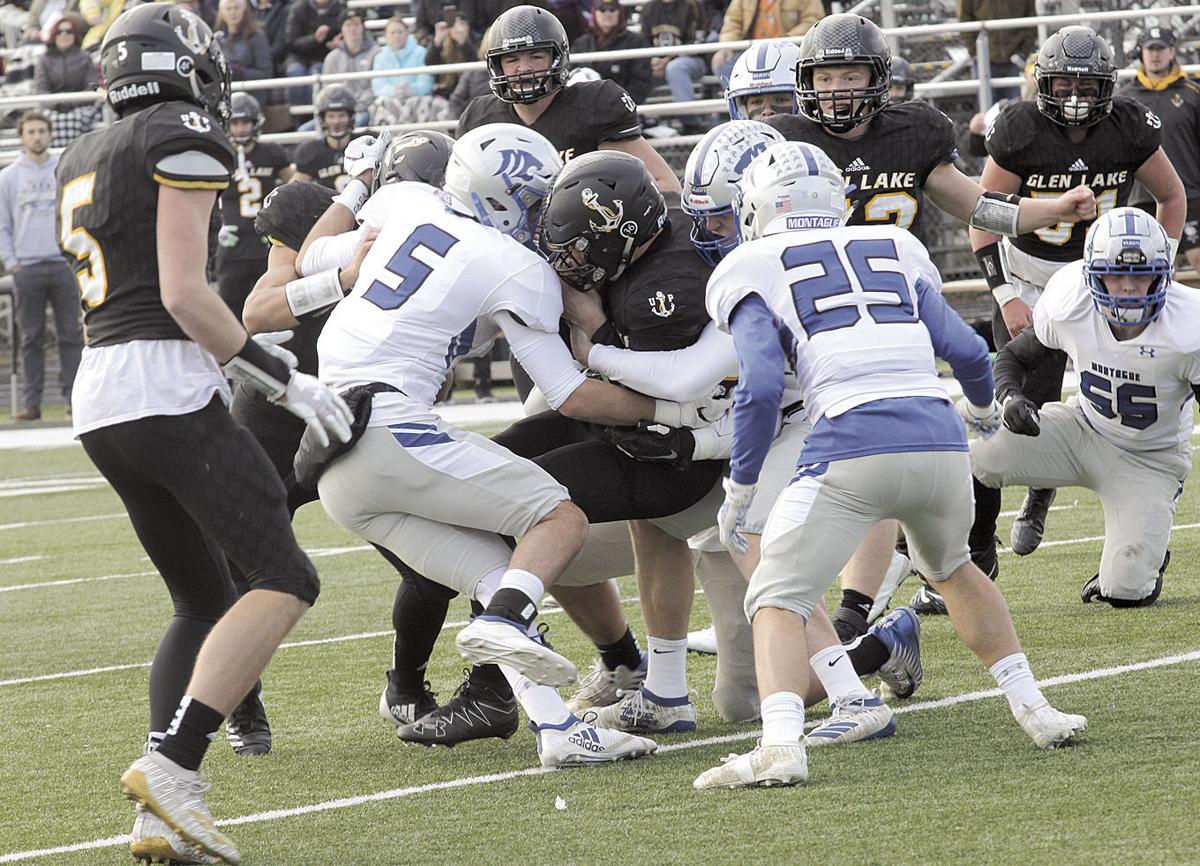 Montague’s Johnny Monette heads upfield with the ball during last season’s regional game against Sanford Meridian. Monette will be playing at Hope College this fall.

Three local football players made their college choices known recently, all at the Division III level.

Two players, one each from Whitehall and Montague, will attend Hope College, which has drawn so many players from the area in recent years. Montague’s Johnny Monette and Whitehall’s Kyler Honore made the decision to attend Hope. Wildcat Remington Schneider, meanwhile, chose to attend the University of Mount Union, a Division III powerhouse located in Alliance, Ohio.

That trio will join Brennan Schwarz, who signed with Division II Ferris State on National Signing Day in February, as college football players from Whitehall and Montague in this senior class.

Schneider’s choice stands out among the new announcements because of the national reputation of Mount Union, a program that is a perennial national championship contender in Division III. The Purple Raiders have won nine national titles this century, most recently in 2017.

“I hadn’t had a relationship with them until four to five years ago, and since then they’ve talked to me each year,” Collins said of Mount Union. “They evaluated some guys and reached out to the ones they liked, and Remy was one of them. Rem liked them in return and made the trip.

“He talked to the coaches, loved the school and atmosphere, and the winning culture they have in Division III football is big.”

Schneider, who also starred on the baseball diamond during his Montague career, battled two major injuries he suffered during his junior year, which suppressed his individual statistics. Schneider broke his leg and dislocated his ankle during football season that year, then later suffered a torn labrum during baseball season. However, he did accumulate 56 tackles in the 2019 season, nine of them for a loss, and also had 200 yards receiving.

“Coming in pre-injury, he was a highly-touted athlete for us that just couldn’t shake the injury bug,” Collins said. “What people saw was a guy that was slowly recovering and couldn’t get to 100 percent. Once he got back he played exceptionally well. He was a great leader for us down the stretch. He really stepped up in big moments for us and was a vocal defensive header as we made a run in the playoffs. What we witnessed was him emerging, not just physically, but leadership-wise, during the football season.”

Schneider said he still doesn’t quite feel he’s back to 100 percent, but is working hard daily to get back to that form. He wasn’t familiar with Mount Union prior to receiving a call from them, but was quickly impressed when he examined the program’s winning culture.

“It gave me a confidence boost to know a school like that was interested in me,” Schneider said. “Obviously at Montague, we came super close (to winning a championship) a couple of years. Just the winning and the culture at Mount Union really excites me. It’s the reason I chose that school.”

Schneider said he will begin his career for the Purple Raiders at outside linebacker, his defensive position at Montague, but coaches have told him that if he bulks up he could become a defensive end. He hopes to represent his area well at the D-III power.

“I just want to prove that guys from small towns like Montague can bring it like the guys from the big towns,” Schneider said.

Monette and Honore will head to Hope, a school that’s welcomed many local players in recent seasons. Hope is Collins’ alma mater and also is where Montague’s Bryce Stark and Whitehall’s Terrell Harris each played their freshman seasons last fall. Former Wildcat star Luke Marsh, who originally went to Grand Valley State, has also made his way to Hope.

Monette had a terrific senior season for the Wildcats, moving to slot receiver from the running back position midseason with great results. Monette racked up just shy of 1,000 yards of offense, and 12 touchdowns, during the season, and also recorded 62 tackles in the secondary.

Collins said he believes Monette will be pursuing a medical degree and said his interest in Hope goes beyond football.

“I’d say about any of our kids, it’s not just about football,” Collins said. “Certainly that’s a small factor, but anything can happen as far as athletics in school, and it’s where you want to get your degree. Johnny likes the small school and the tight-knit culture with some of the guys he knows throughout West Michigan...Football or no, it’s a great school for him to go to.”

Monette, who suffered two debilitating injuries during his time at Montague — he blew out his knee in the 2017 season opener against Reed City and broke his leg in a 2018 contest against Hart — was pleased that Hope was interested in him despite those setbacks. He said he also received interest from Adrian College, but the Montague/Hope connection proved too strong to resist.

“Obviously with Bryce going there, I had a chance to go down and see a couple games this year,” Monette said. “I’ve been talking to Coach (Peter) Stuursma. I was nervous, with my injuries, that I wouldn’t be able to go play somewhere. Coach still wanted me to come play for Hope and become a Dutchman.

“I really like the atmosphere in Hope. It’s not the biggest college in the world, but it’s in downtown Holland. I found a really good balance of fulfilling my dream of playing a college sport, but I also get a really good education at Hope.”

Monette expressed gratitude to Stuursma for giving him a shot at the college level, and also to the Wildcats’ coaching staff for sticking with him in high school.

“I want to shout out Coach Collins and the Montague staff for believing in me after my two injuries,” Monette said. “I’m super happy to be able to go play college football.”

Honore’s decision to go to Hope was quick enough that, coach Tony Sigmon said, he didn’t realize Honore was going to make it. During most of his senior year, Honore had seemingly made peace with moving on from organized sports and attending Ferris State. However, he said that due in part to the unfortunate nature of his senior year, he ultimately decided to change course. Honore, a former all-state safety who will play that position at Hope too, suffered a season-ending knee injury during the Oakridge football game last fall that also cost him his wrestling season. Then, he joined the rest of his classmates in seeing their senior school years cut short by COVID-19.

“It was just one of those things where, with everything kind of going sideways, I think Kyler had some opportunity to think back and reflect on his football playing career, both his junior and senior year,” Sigmon said. “He decided he didn’t want to be done yet, and I don’t blame him after the way his senior season ended.”

Honore said his knee is now mostly healed and he is working with the Hope program’s weightlifting regimen to build strength back in the knee. He hopes to be 100 percent again in the fall.

Honore said he did not consider another school besides Hope to play football. He’ll join former teammates like Harris and Gavin Schaeffer on the Dutchmen roster.

“I’ve always been interested in Hope,” Honore said. “Hope, Ferris and maybe Grand Valley State were my choices. If I was playing football, I was going to Hope.”

Sigmon said Honore’s nose for the ball is what will make him successful in college football and remembered one play in particular from Kyler’s junior season that showed off his ability to make plays.

“We were playing Dexter his junior year, and they’d set up an offensive formation to where there was a lot of spacing to their sideline,” Sigmon said. “They threw a bubble screen, and Kyler ran 14 or 15 yards (to make the tackle) and the kid ended up gaining one yard. If you look at it (on film), you think, my goodness, this is a 10-yard play or even a touchdown. And he was a sure tackler, which I think comes from him being a wrestler as well...This kid is not afraid of anything. He can measure up to anyone he plays against.

“I can’t wait to see him play again. I know his season was cut remarkably short, and he deserves another opportunity.”

Collins expressed pride in each of the local signees and credited the White Lake area in part for what it’s done for them.

“Our community does a great job raising kids, and there’s a lot of great kids in our community,” Collins said. “They’re disciplined, hard-working kids. They’re well-behaved and they do the right things. These guys are witness to that for sure. It’s fun to see them take educational athletics to the next level. I think our kids approach that well.”