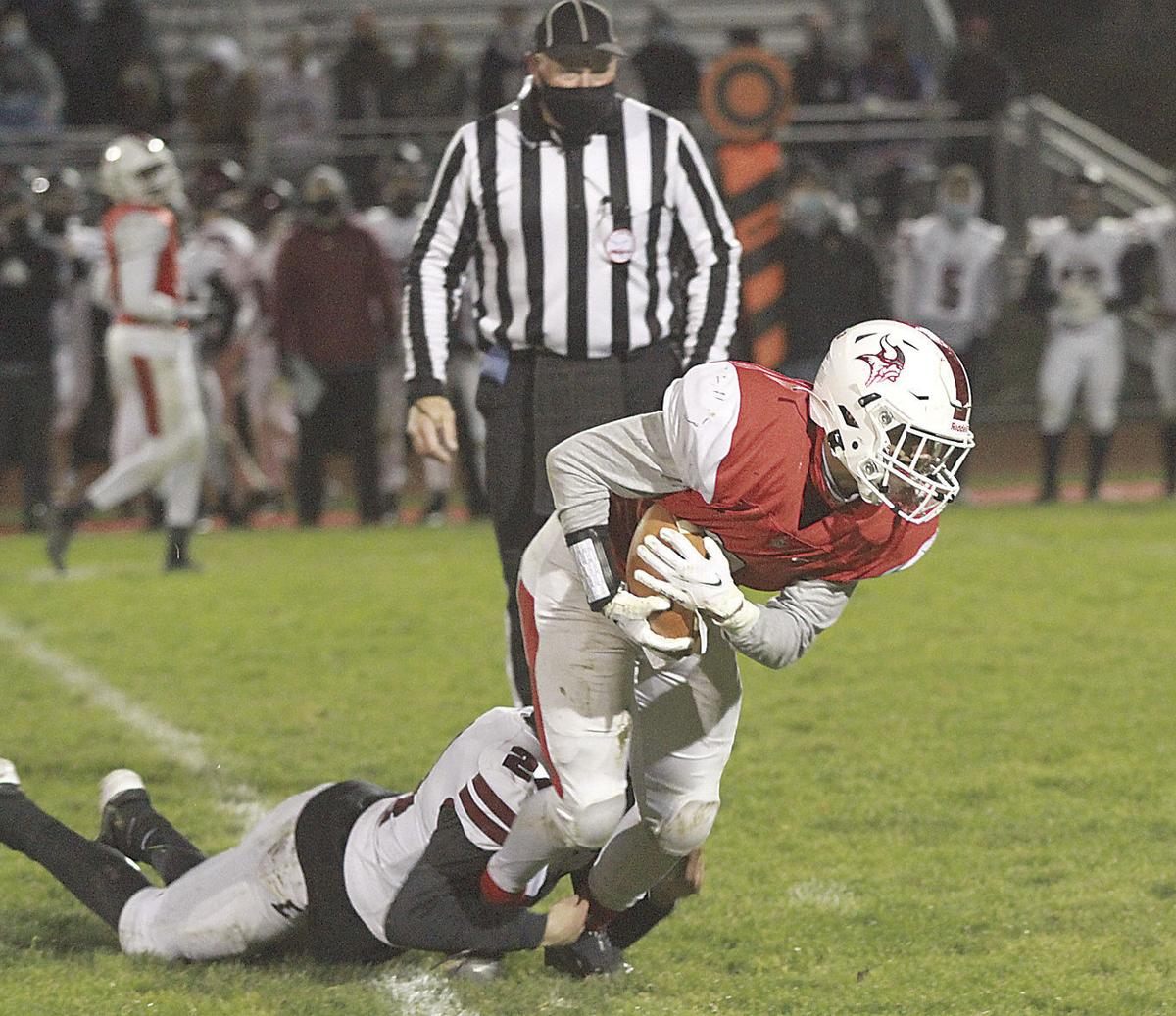 Whitehall's Kris Dowdell (right) is brought down by a Forest Hills Eastern defender during Friday's district finals game at Whitehall. The Vikings lost, 41-13. 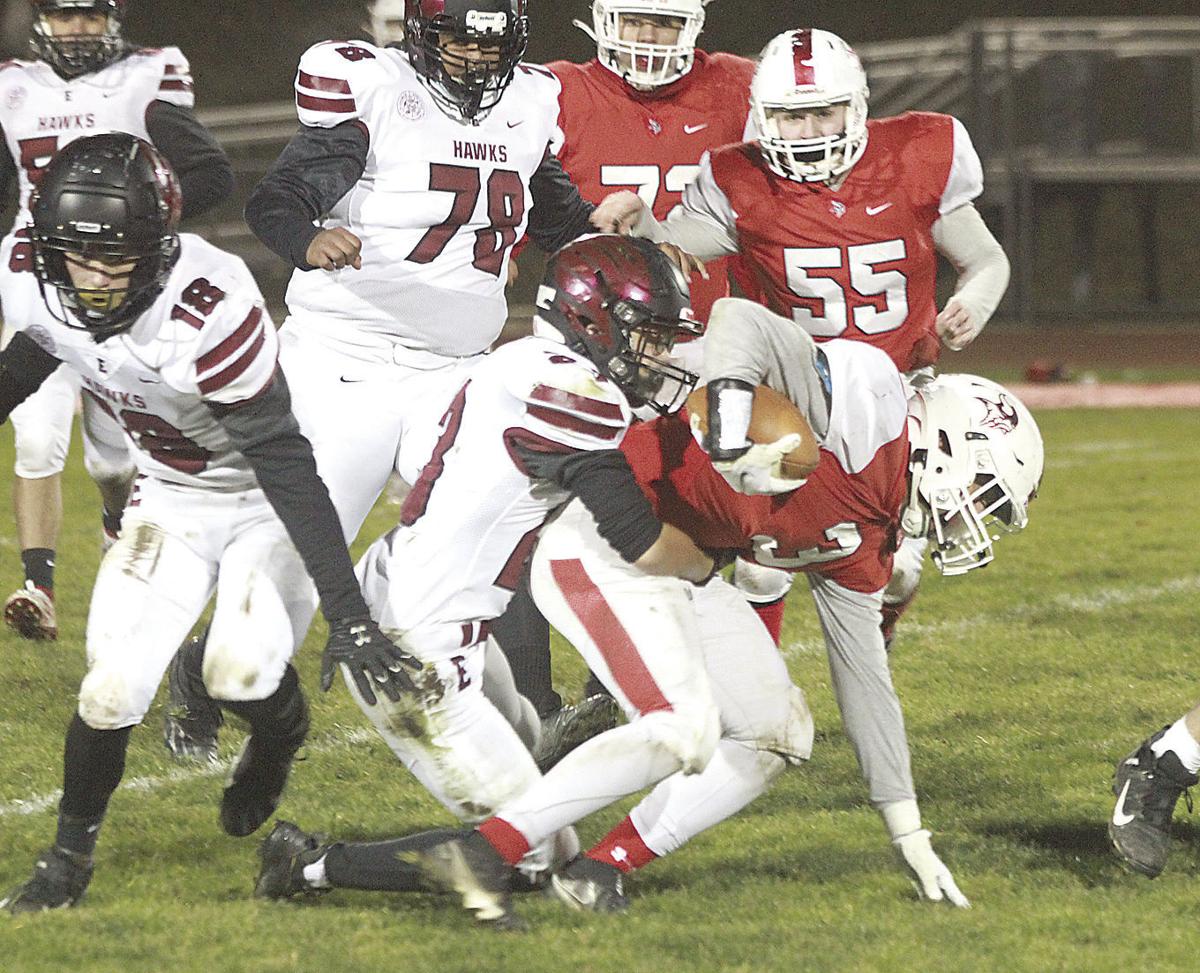 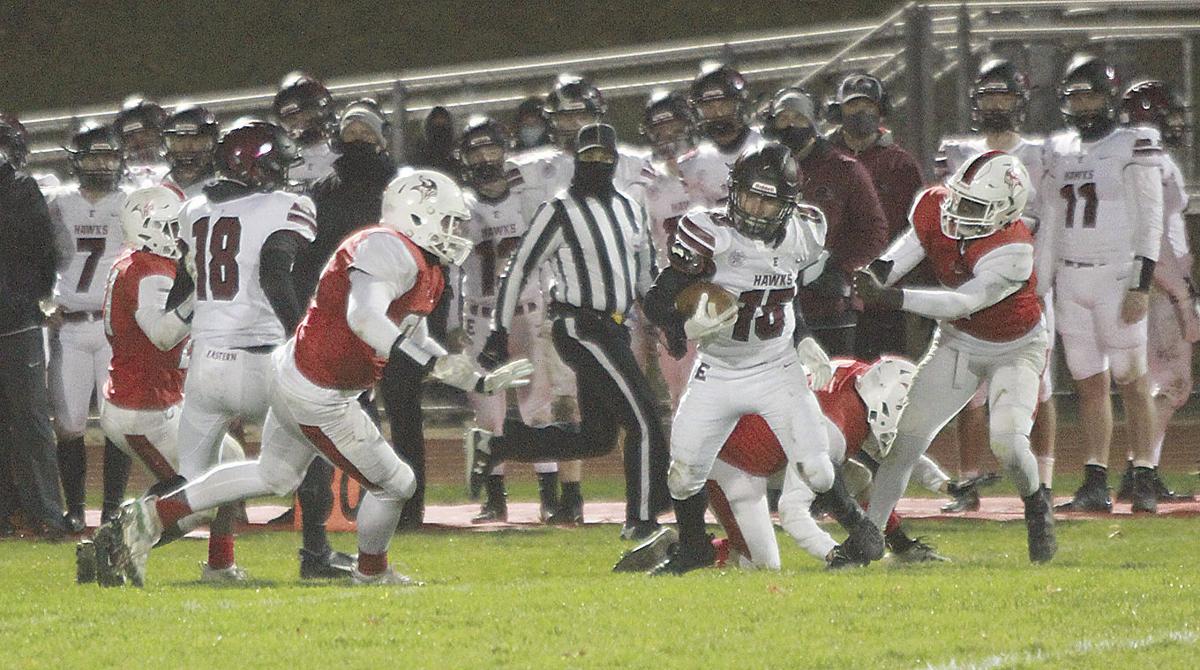 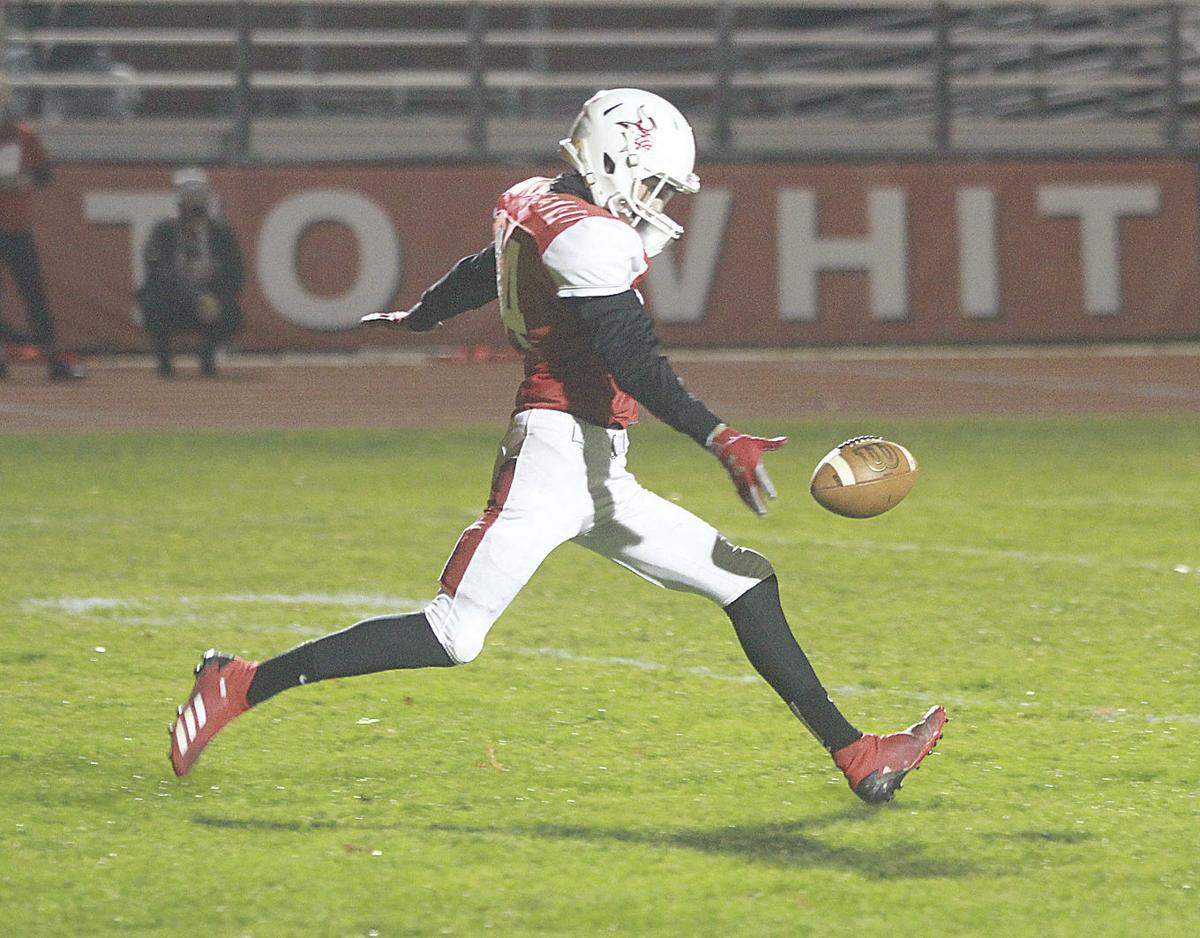 Whitehall’s Bailey Taranko winds up to punt the ball for the Vikings during Friday’s district finals game against Forest Hills Eastern. Whitehall lost, 41-13. 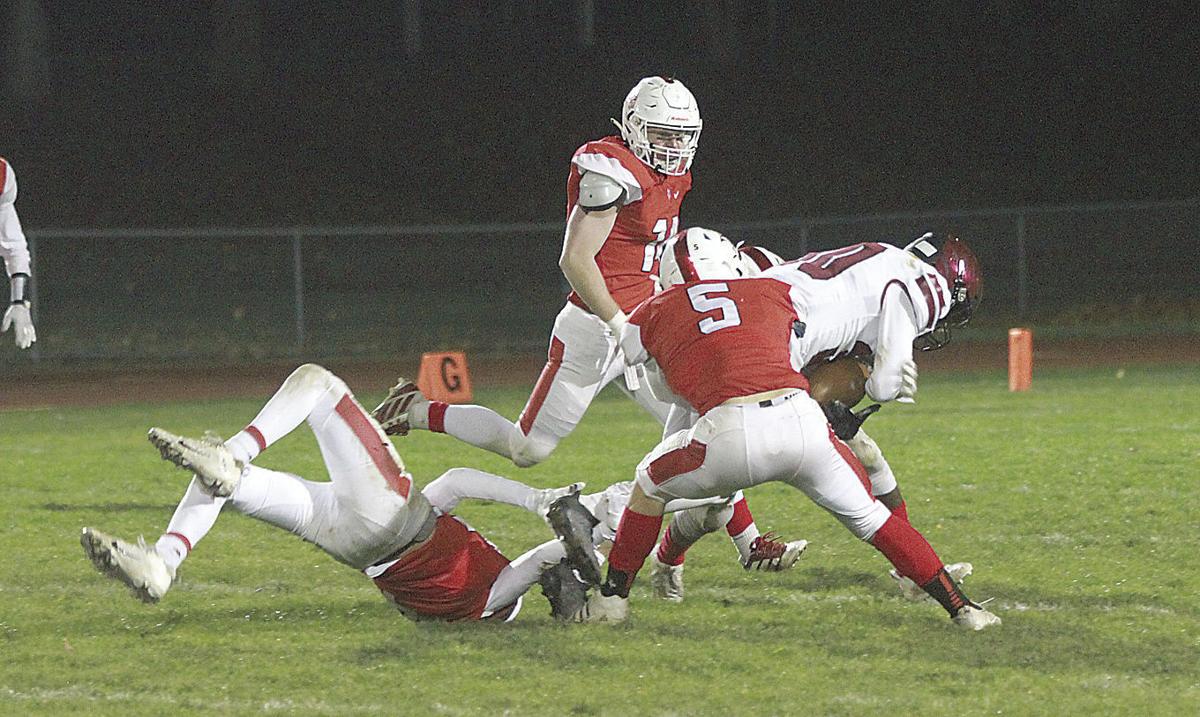 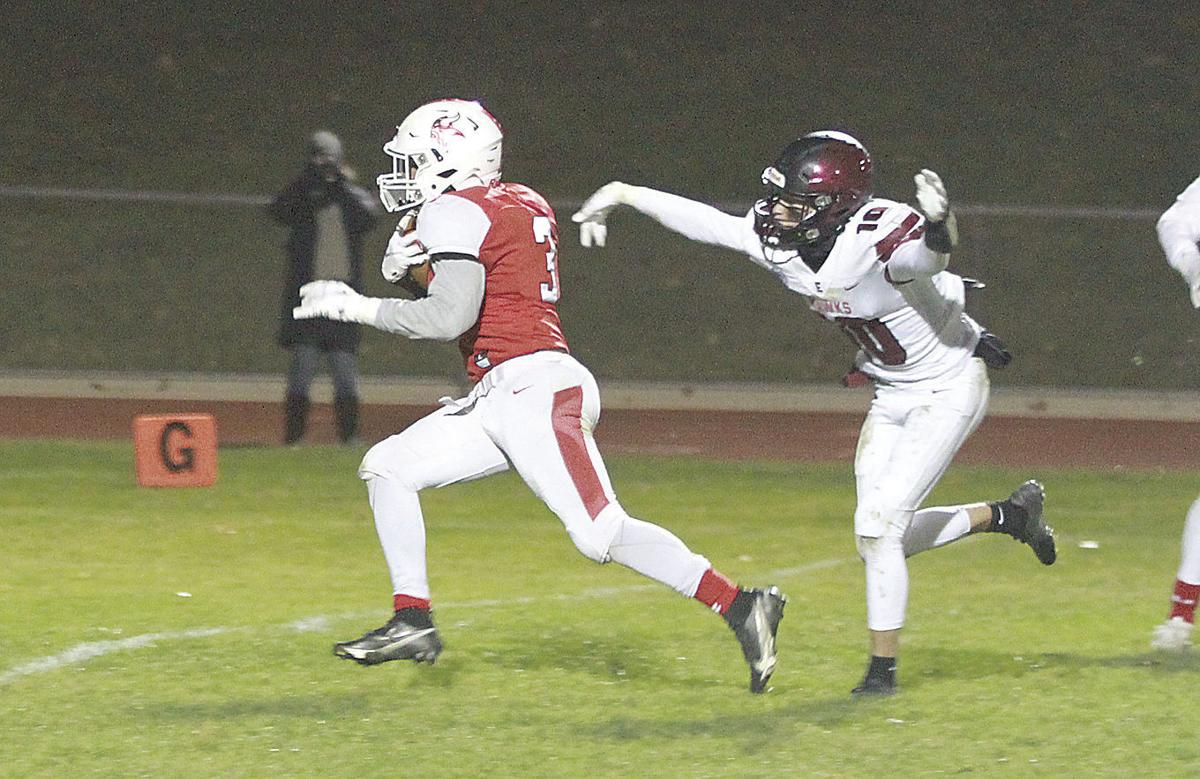 Whitehall’s Kris Dowdell (3) heads to the end zone away from the grasp of Jacob Armbrester of Forest Hills Eastern during Friday’s district finals game at Whitehall. The Vikings lost, 41-13. 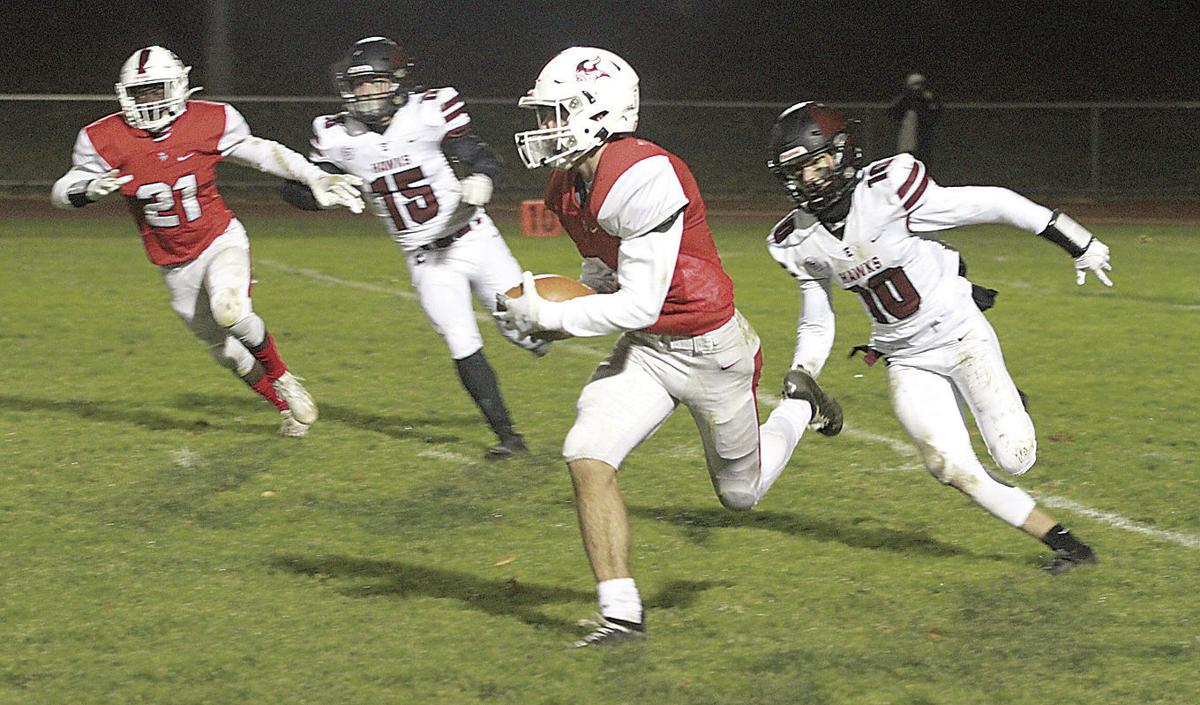 Whitehall's Kris Dowdell (right) is brought down by a Forest Hills Eastern defender during Friday's district finals game at Whitehall. The Vikings lost, 41-13.

Whitehall’s Bailey Taranko winds up to punt the ball for the Vikings during Friday’s district finals game against Forest Hills Eastern. Whitehall lost, 41-13.

Whitehall’s Kris Dowdell (3) heads to the end zone away from the grasp of Jacob Armbrester of Forest Hills Eastern during Friday’s district finals game at Whitehall. The Vikings lost, 41-13.

WHITEHALL — The Whitehall Vikings were looking to pick up their first football district championship since 2014 Friday night at home, but fell short to Forest Hills Eastern, losing the battle 41-13.

“I’ve got to give credit to Eastern,” said head coach Tony Sigmon. “They went out and played an excellent football game. They did a lot of things well and did enough to win a district championship.”

It wasn’t the start to the game the Vikings were looking for, as their offense was forced off the field after just three plays.

On the ensuing punt, Whitehall’s punter Nate Bolley had issues bringing in the snap and bobbled it around until he was taken down at the Vikings’ own 5-yard line, giving the Hawks great field position.

It then took the Hawks just two plays to score. with Ethan Johns powering it in from two yards out, making it 7-0 Hawks early in the first.

Though the Vikings came out hot on the following possession, the Hawks’ defense held strong and stopped the Vikings on a fourth-and-short to extend the drive, giving the ball back to Forest Hills Eastern.

Fumbles by the Hawks helped set up the Vikings for their first score of the game, as Johns lost the ball during his punt return, which was recovered by Max Brown of the Vikings. It set up Whitehall at the Hawks’ 15-yard line.

Two plays later, Alec Pruett scampered in for a 15-yard touchdown run to knot the game up at 7-7 early in the second quarter.

While it was turnovers by the Hawks helping the Vikings, it was Vikings’ penalties helping the Hawks move downfield, as two personal fouls against Whitehall helped get the Hawks in enemy territory.

Eastern capitalized with a 22-yard touchdown run by Kevin Sprague to give the lead back to the Hawks at 13-7.

Just before the end of the half, the Hawks marched down field and capped off the drive with a 6-yard touchdown run by Bryson Kuzdal, to make it 20-7 Hawks at the break.

On the Vikings’ first drive of the second half, after falling short of the first down, they tried some trickery with a fake punt, but were unsuccessful. It cost them dearly, as on the very first play of the Hawks’ drive, Cal Doyle hooked up with Grant Lancaster for a 28-yard touchdown pass, increasing the Hawks’ lead to 27-7.

A poor kick return left the Vikings at the 4-yard line and the wind seemed to get out of their sails. A 47-yard run by Pruett, though, turned things around. After a horse-collar penalty moved the Vikings up to the Hawks’ 29-yard line, Kris Dowdell broke through the Eastern defense and into the end zone to cut into the Hawks’ lead, which was now 27-13.

That would be the last time the Vikings were able to find the end zone though. The Hawks tallied two more scores, one on a 3-yard rush by Jacob Armbrester and the other on an Andrew Durbin interception returned for a touchdown by Hawks linebacker Caden VandenBurge.

Following the loss, Sigmon talked about how much it will hurt to lose such a strong senior class.

“Coming into the year when talking with the team, we told the lower classmen that if we were going to have any success it was going to be on the shoulders of our seniors. They’ve been through a lot of adversity in their four years here, and this year is no exception.

“We’re proud of them. We love them. Not the way we wanted to go out, though.”

Durbin completed 12 passes for 141 yards for the Vikings.